has been accused of sexism for telling a female Labour MP to ‘watch her tone’ after she grilled him on the government’s  testing strategy in the House of Commons today.

Dr Rosena Allin-Khan, a former Labour deputy leader candidate who also works as an A&E doctor in the fight against the pandemic, said the government’s policy had ‘cost lives’ and called on Hancock to commit to a minimum of 100,000 tests per day going forward.

In response, an indignant Health Secretary told the Labour MP that she should ‘take a leaf out of the shadow secretary of state’s book in terms of tone’.

Dr Allin-Khan, who attends shadow cabinet meetings, shared the exchange on social media and later tweeted she would not ‘watch her tone’ when challenging the government.

The row came after the total number of coronavirus tests dipped below the 100,000 target again today, for the third day in a row.

Hancock set the target at the beginning of April and the government announced on Friday and Saturday that it had exceeded it.

However, the number of tests have fallen short of the target for three days in row since, with 84,806 completed in the 24 hours up to 9am today.

It comes as Britain recorded 693 more coronavirus deaths today, to take the official death toll past 29,000. However, data from the ONS suggests the true number of victims could be at least 40,000 – giving the UK the highest death toll in Europe.

In other developments in the UK’s coronavirus battle today: 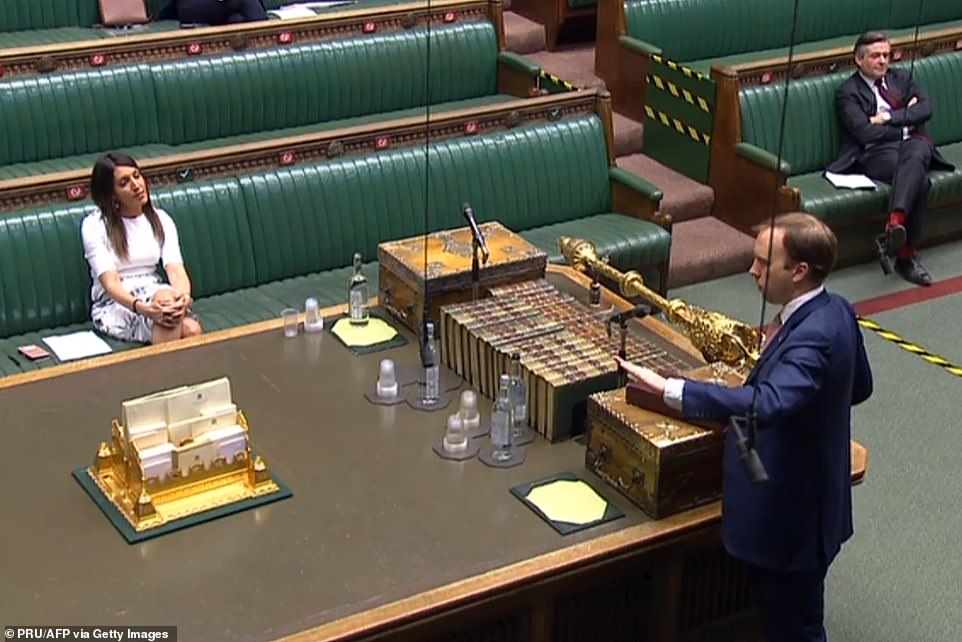 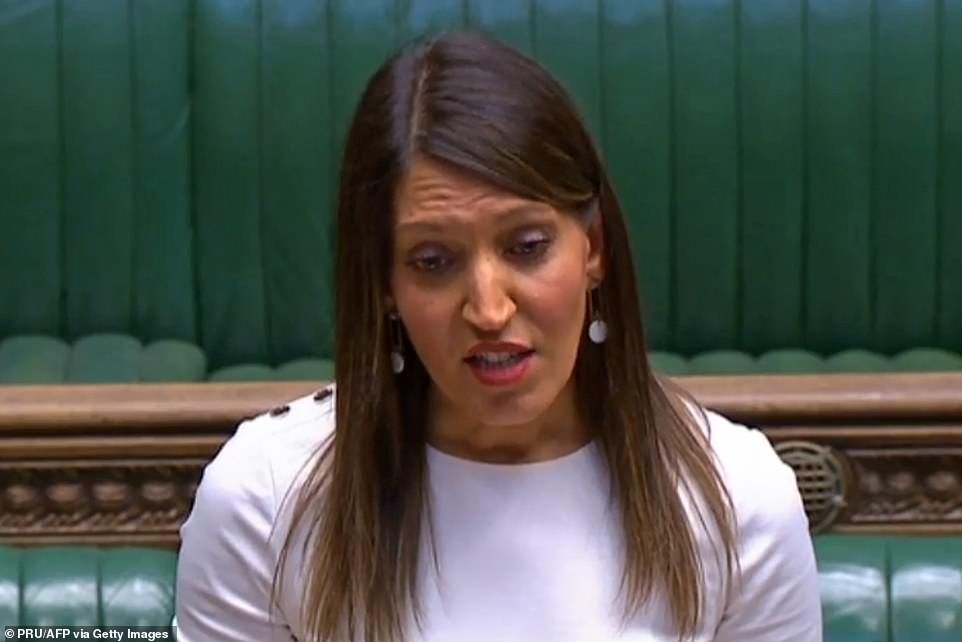 Dr Allin-Khan, who attends shadow cabinet meetings and works as an A&E doctor, later tweeted she would not ‘watch her tone’ when challenging the Government 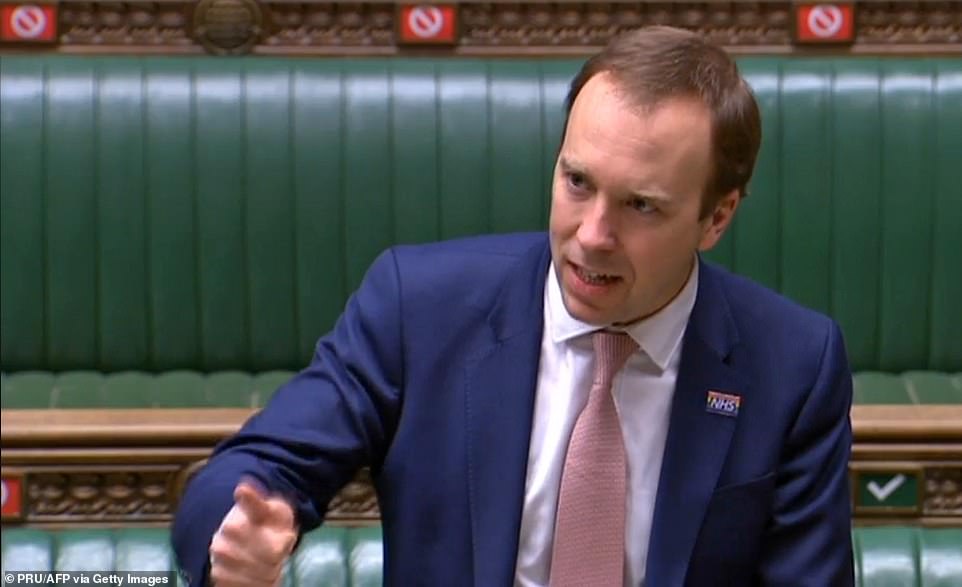 Mr Hancock said: ‘I think she might do well to take a leaf out of the shadow secretary of state’s book in terms of tone’ 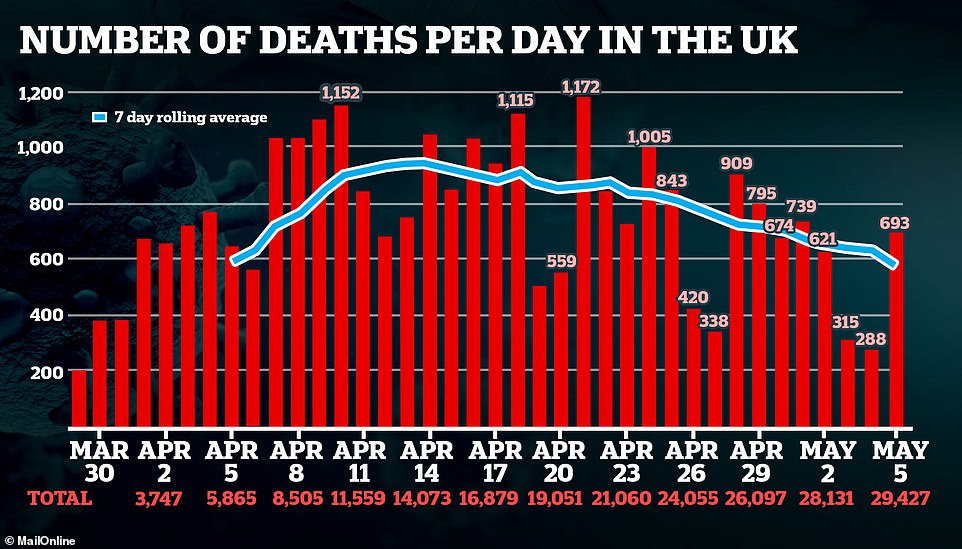 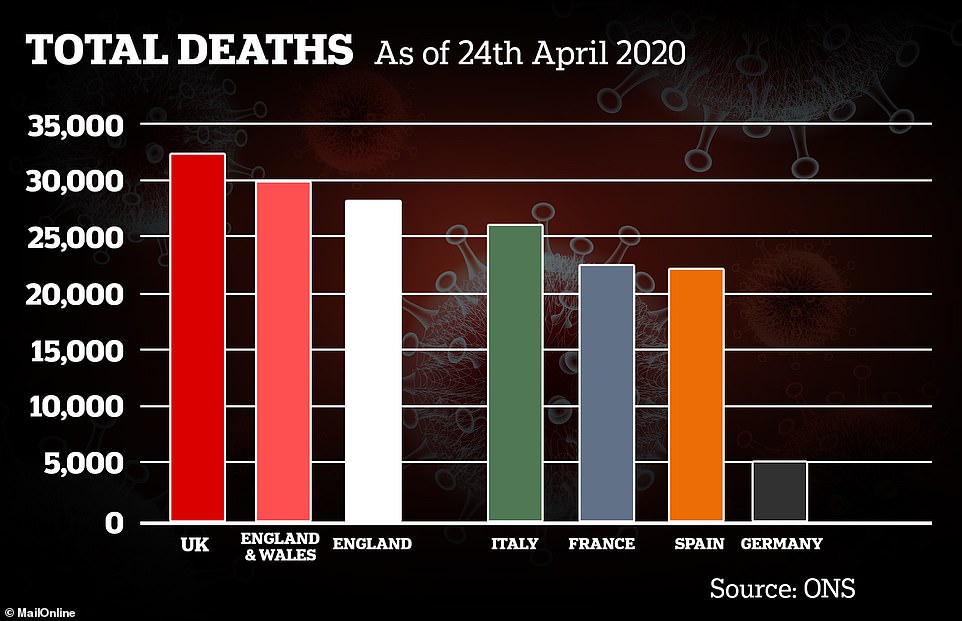 The UK now has more confirmed COVID-19 deaths – according to backdated statistics from the Office for National Statistics, National Records Scotland, and Northern Ireland’s NISRA – than any other country in Europe

Speaking in the Commons, Dr Allin-Khan said: ‘Frontline workers like me have had to watch families break into pieces as we deliver the very worst of news to them, that the ones they love most in this world have died.

‘The testing strategy has been non-existent. Community testing was scrapped, mass testing was slow to roll out, and testing figures are now being manipulated.

‘Does the Secretary of State commit to a minimum of 100,000 tests each day going forward?

‘And does the Secretary of State acknowledge that many frontline workers feel that the Government’s lack of testing has cost lives and is responsible for many families being unnecessarily torn apart in grief?’

Mr Hancock replied: ‘I welcome the honourable lady to her post as part of the shadow health team.

‘I think she might do well to take a leaf out of the shadow secretary of state’s book in terms of tone.

‘I’m afraid what she said is not true. There’s been a rapid acceleration in testing over the last few months, including getting to 100,000 tests a day.’

She tweeted: ‘Something creepy about a man telling a woman to watch her tone! Worse that he recommends she adopts the tone of another man. I suggest @MattHancock changes his.’

‘It reflects and reverberates with the reality of what yourself and other NHS workers are experiencing. Hancock very unwise to be so dismissive.’

Shadow culture minister Alison McGovern wrote: ‘I think the words he was looking for are, ”thank you for your service”.’

He tweeted: ‘This is no way for the Health Secretary to speak to a serving A&E doctor.’

Shadow Home Office minister Jess Phillips put: ‘Her tone was fine, respectful, and might I dare say her view is more knowledgeable about the front line than the Health Secretary.

‘Can’t imagine why he doesn’t like her ”tone”. (obviously I can well imagine).’

Even some celebrities weighed into the fallout and savaged Mr Hancock on social media.

Chef Nigella Lawson, whose father Nigel was Chancellor of the Exchequer under Margaret Thatcher, added: ‘There was absolutely nothing wrong with your tone.’

Douglas Mackinnon, who directed the BBC’s Sherlock and Line Of Duty, put: ‘Nasty and bullying from Matt Hancock.’

‘@MattHancock just clearly didn’t like being asked a perfectly legitimate question about the lack of testing & the manipulation of information.’

C testing numbers have been running below 100,000 a day again despite a massive expansion of capacity, it was revealed last night.

Mr Hancock claimed victory in the race to hit the target on Friday, saying there had been 122,000 on the last day of April. 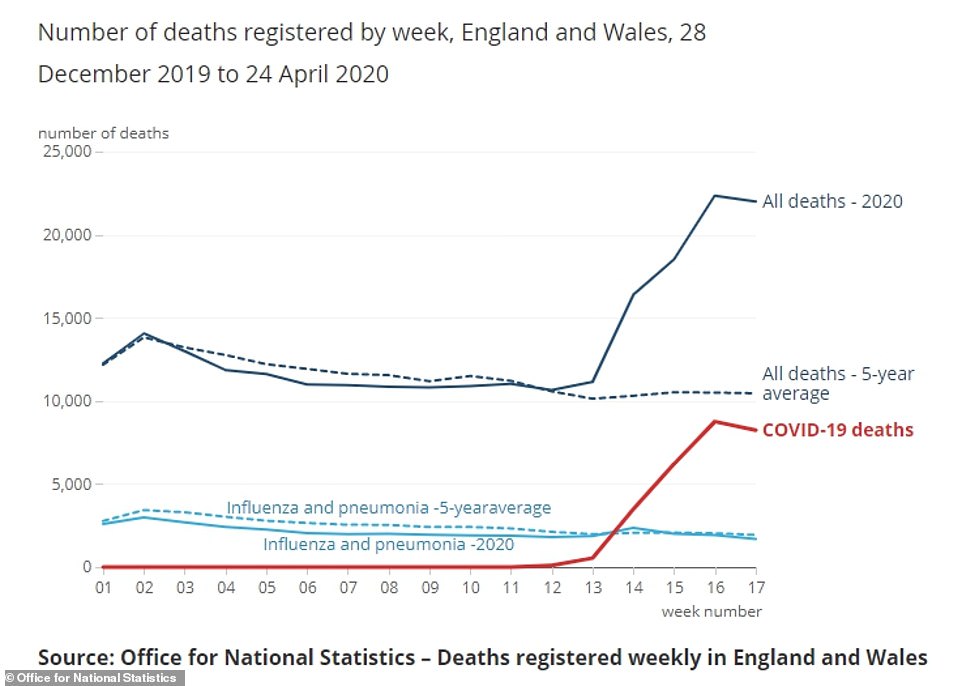 The government furiously denied fixing the numbers to avoid embarrassing failure, pointing out the tests do not feature in the figures when they are returned.

Earlier today Mr Hancock said testing of asymptomatic NHS staff will be rolled out further across the country.

Shadow health secretary Jonathan Ashworth said: ‘I wonder if he’s (Mr Hancock) considered the study from Imperial (College London) that suggests weekly screening of healthcare workers, testing them every week whether symptomatic or not, reduces their contribution to transmission by around 25 per cent to 33 per cent?

The COVID-19 death toll in care homes peaked more than a week after it did in hospitals, according to official figures released this morning.

ONS statisticians trawled through all the coronavirus deaths in England and Wales to analyse when they actually occurred.

April 8 (1,318 deaths) was found to be the darkest day of the outbreak – which officially began to spread on British soil back in February.

Data showed this coincided with the peak in hospital deaths (983), which have since plummeted (402 on April 24).

However, the daily care home death toll did not peak until nine days later – April 17 (415), according to the ONS analysis.

‘Will he look at testing all healthcare staff, whether they’ve got symptoms or not?’

Mr Hancock replied: ‘Yes, (Mr Ashworth) has asked questions in a responsible and reasonable way and I welcome his support for the test, track and trace pilot in the Isle of Wight that we announced yesterday.

‘We have piloted the testing of asymptomatic NHS staff now in 16 trusts across the country and those pilots have been successful, and we’ll be rolling it out further.’

Mr Hancock said privacy is ‘there by design’ as part of the new NHS test, track and trace app.

Mr Hancock responded: ‘People need to know that the app has privacy in its design, the data that it holds is held on your phone, it doesn’t go to the Government, until of course you need to get a test, in which case of course you’ve got to get in contact with the NHS.

‘So, privacy is there by design, there’s cross-party support, there’s, according to a very early poll, 80 per cent of people on the Isle of Wight want to download it.

‘These are good early signs and we’ll have a big communications campaign to explain to people the benefits of the test, track and trace programme as we roll it out across the country.’

Another 693 people were today confirmed to have died of COVID-19 in Britain, taking the number of victims to 29,427 and making Britain the worst-hit nation in Europe.

And separate backdated figures from the Office for National Statistics (ONS) show the figure appears to have already been higher than 32,000 by April 24 – 10 days ago.

That number is 42 per cent higher than the count announced by the Department of Health at the time, suggesting the current total could be higher than 40,000 – this would mean COVID-19 has killed more Britons in eight weeks than died over seven months during the Blitz bombings in World War Two.

Today’s data confirms that more people have died of the coronavirus in the UK than in Italy, still considered to be the worst-hit country in Europe and had suffered 29,079 fatalities by this morning. Only the US has had more deaths than Britain – almost 70,000 – while there have been 25,600 in Spain and 25,200 in France.

Foreign Secretary Dominic Raab today also announced 4,406 more cases of the life-threatening virus had been confirmed, taking the official size of the outbreak to 194,990 – but the true size of the UK’s crisis is a mystery due to the controversial decision to abandon widespread testing early on.

In Downing Street’s press conference, Mr Raab also lashed out at ‘predatory’ hackers targeting organisations involved in the fight against coronavirus, saying criminals and ‘hostile states’ were trying to take advantage of the crisis for their own ‘malicious ends’.

Discussing the death toll, he added that the scale of the disaster in Britain was a ‘massive tragedy’ on a scale the country has never seen before. He refused to speculate on international comparisons.

Emotional moment Maori teenagers break down in tears during funeral haka for boy
Mother reveals how she cleared up toddler son's blistering eczema with $10 'miracle' cream
Some 600 Whitehall staff are set to be redeployed to prepare for possible no-deal Brexit
Lady Gaga cries as she earns Golden Globe, says 'it's hard to be taken seriously' as woman in music
'Air conditioner started fire' that killed 10 teenage footballers in Rio training centre
Former PM Theresa May refused to take part in a US operation to protect ships in the gulf
Greta Thunberg's expressions revealed devastation at Trump hijacking big moment at UN Climate Summit
Prince Andrew keeps a low profile at Christmas Day service