Ten hikers from who drove 245 miles to Snowdonia were forced to turn around and head home after being stopped by police.

The group had driven five hours in two vehicles when they were stopped near their destination on the A5 in Bethesda, North Wales.

They told officers they wanted to go walking in the mountainous National Park.

Instead, the North Wales Police officers escorted their cars to the A-road back to the south so they could begin the ten-hour round trip home.

The force tweeted: ‘A group of 10 stopped in 2 vehicles on A5 #Bethesda earlier, having travelled from London with the intent of going for a walk in Snowdonia. 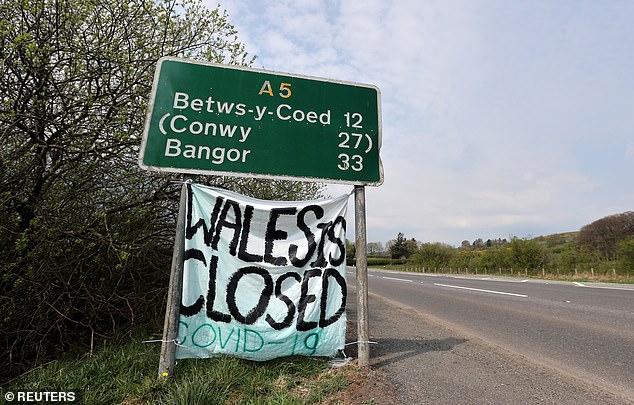 North Wales Police officers escorted the drivers of two cars carrying a group of ten hikers back to the A-road so they could begin the ten-hour round trip home to London. Pictured, a sign on the A5 motorway warns ‘Wales is closed’

Told to return home immediately and escorted back to the A55. Reported for breaching #COVID19 legislation.’

In a second incident dealt with by police, staff from a hotel challenged a man ‘who though the regulations did not apply to him’ when they saw him returning to his car after a hike.

He had driven 180 miles from Cumbria to walk up Mount Snowdon at 6am. North Wales police said: ‘He was abusive to the informant when challenged and clearly thought the regulations did not apply to him. 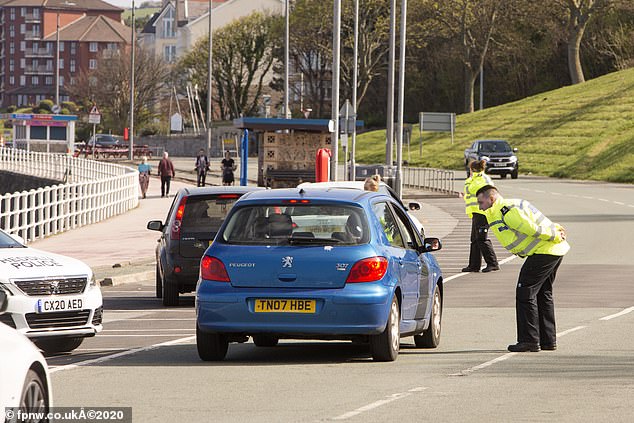 The group (not pictured) had driven five hours in two vehicles when they were stopped near their destination on the A5 in Bethesda. Pictured, a road block on Rhos on Sea’s promenade in North Wales

‘Police were called and he was stopped on the eastbound carriageway of the A55 by one of our armed response team who reported him for breaching the legislation.

Meanwhile, in Bridgend officers responded to reports of a house party in Coity.

Police said five of the six occupants were found not to be part of the household – with three coming from Berkshire.

Officers in Merthyr Tydfil found a couple who had travelled nearly 150 miles from Leicester to pick up a rug. 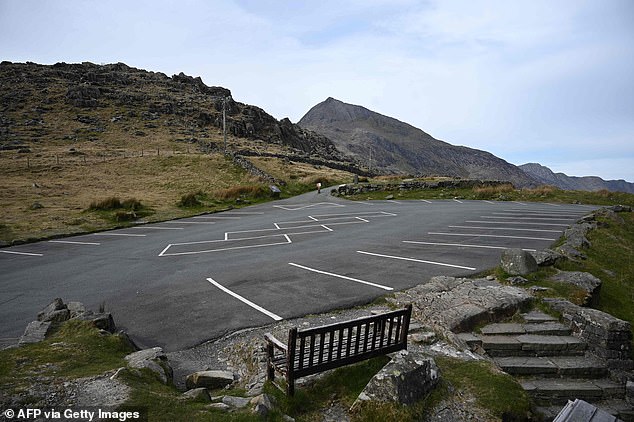 They told officers they wanted to go walking in the mountainous National Park. An empty car park is pictured at Pen-y-Pass

In the Brecon Beacons, police stopped people who had driven from Birmingham and Hereford, and two hikers from Bristol who were attempting to walk Pen Y Fan were issued with fixed penalty notices by police.

In Pembrokeshire, a driver on a 60-mile round trip to buy tomato plants was reported for non-essential travel.

While another driver was stopped at Begelly and issued with a ticket as they were ‘looking to get a coffee’. Police said it was not the first time this motorist had been reported.

In Tewkesbury, Gloucestershire, police found an Airbnb open with a couple from Slough staying there and a hand car wash in operation. 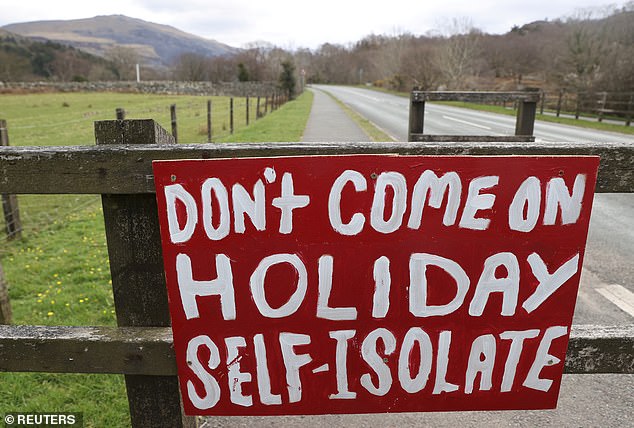 In the Brecon Beacons, police stopped people who had driven from Birmingham and Hereford. Pictured, a message warning tourists away is seen at Snowdonia

Two people who had travelled from Birmingham for a ‘day out’ to Broadway Tower in the Cotswolds were issued with fixed penalty notices.

While in nearby Bibury, officers issued nine tickets to people visiting from Leicester and London.

It comes a week after an angry local confronted a couple who drove 180 miles to rent an Airbnb.

The man in Snowdownia, Wales, slammed the pair and accused them of breaking lockdown rules – but the venue’s landlady claimed the couple were made homeless by the pandemic.

The Government has ordered people to stay in their primary residence as the crisis continues.

Footage that surfaced on Facebook shows a man demanding to know why they were staying in the village of Penmachno.

The couple try to tell the man that they were renting the property but the local fires back: ‘No you’re not, you’ve come up in the lockdown. Coronavirus – you know what’s going on don’t you?’

He adds: ‘How dare you come to this village and dare spread this, there’s a lot of old people here and sick people. How stupid are you? Do you not watch the news and see people dying out there from this thing?’ 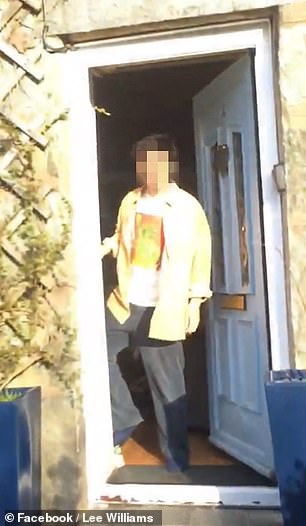 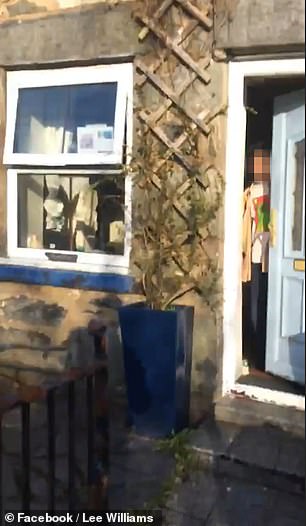 She said the couple were kicked out of their home in Oxford and approached her for somewhere to stay. She said the man’s ‘aggressive’ outburst had ‘shocked’ her.

She told the show: ‘There’s a young couple staying there, they come from Oxford, they asked me Friday. 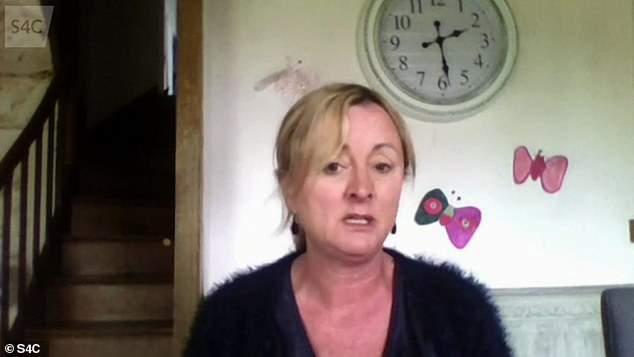 ‘They were in a sticky situation, they’d lost their accommodation due to the coronavirus, they’d been chucked out of their accommodation and they went through Airbnb and asked me if they could stay for a month because they literally had nowhere to go.’

The video has garnered more than 17,000 views on Facebook since it surfaced on Monday.

One resident even said that the police had been contacted over the incident. Meanwhile, Airbnb today blocked all UK properties from taking new bookings with only exception being those made by key workers. The blockage remains in place until April 18.

Teacher passed away after sending pupils letter from death bed thanking them for their friendship
Emily Maitlis lands Newsnight lead presenter job
Blazing meteorite 'shakes the ground' and 'warms the air' as it streaks across the night sky
Catterick woman, 58, arrested for controlling behaviour after asking husband to help around home
British Airways flights disruption is set to continue TODAY
R Kelly complains that he is only allowed to see one of his girlfriends at a time in prison
American Airlines passenger shames traveller who repeatedly punched her seat when she reclined it
PAUL THOMAS on... the coronavirus death toll