A 16-year-old girl and her 19-year-old boyfriend allegedly tried to hire a hitman to kill her stepfather after he caught them having sex.

Angelina Grace Peluso and Dillian Mikel Weaver were charged in Lycoming County, Pennsylvania, on Friday in what state police described as a murder-for-hire plot to kill Peluso’s stepfather, Howard Blackburn.

The teens’ alleged scheme was foiled when the person they recruited to commit the murder contacted authorities, according to .

The outlet cited arrest affidavits indicating that both suspects confessed after they were apprehended.

According to the affidavits, Blackburn became furious after he found the teens in bed together at his home in Cascade Township on Thursday morning.

Peluso told police that Blackburn slapped and punched her after Weaver left the home.

She then tried to make Weaver angry at Blackburn by telling him via Snapchat that her stepfather had sexually assaulted her. She later admitted to police that that wasn’t true.

Weaver vented his anger over the Peluso’s allegation to a female via Snapchat, telling her he wanted Blackburn dead but wanted someone else to do the killing. 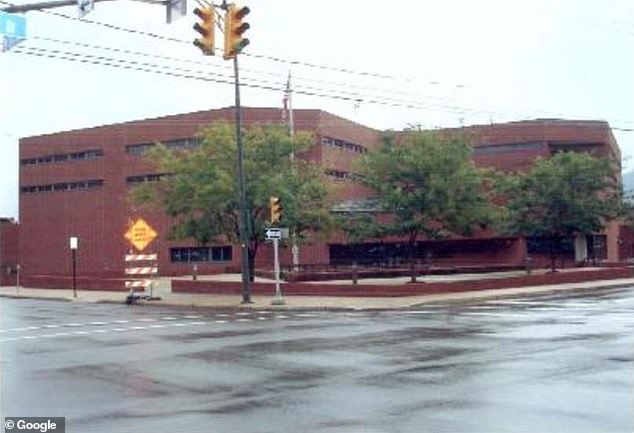 Angelina Grace Peluso, 16, and her boyfriend Dillian Mikel Weaver, 19, are being held at Lycoming County Prison (pictured) in Pennsylvania after police say they tried to hire a hitman to kill Peluso’s stepfather

The female friend, who has not been named or charged, told Weaver that she knew someone who could do the deed and provided him with their contact information.

Weaver reached out to that person and presented his plan to kill Blackburn when he arrived home from work.

The would-be hitman reported the plan to police on Thursday night, saying he initially thought it was a joke.

He provided investigators with a screenshot of a text conversation between Weaver and the woman, which read in part:

‘He gets off work at 5:30 so we’d have to be there before him and get him as soon as he gets out of his truck before he goes inside. We need to cover our faces … they have cameras there.’

The message also directs the shooter to park away from the house to avoid the cameras.

‘Just gotta take his body and dispose of him somewhere. So he’s never heard from..or found,’ the text concludes.

The only payment mentioned in the message was the woman saying that she could give the informant $30 for gas.

The affidavits also feature a screenshot of a conversation between Weaver and Peluso.

‘Baby I need you to tell me that it’s OK if this happens to him. Like you’re OK with him dying. I need confirmation msg as soon as you can about this,’ Weaver wrote.

Peluso replied: ‘Yes baby. I have zero affection for him. We’ve talked about it. I just don’t want to lose you is my concern that’s all.’

In a conversation later that day, Weaver tells the informant he is serious about the plan, writing: ‘I just need him gone and no questions asked yk?’

Weaver mentions that Peluso had told him Blackburn owns a gun and will have it at the ready if he feels suspicious.

The conversation continued on Friday with Waver providing the informant with details on how Blackburn could be killed and reminding him to mind the surveillance cameras, according to the affidavits.

The informant told Weaver he was waiting to hear from a friend who had access to a gun that could be tossed.

Later on, the informant messaged Weaver and said that the friend wanted to meet him in person.

The informant was fitted with a recording device before he and an undercover state trooper went to Weaver’s home, where the suspect got into their vehicle.

Weaver was recorded as saying he wanted “Howie” shot and “out of the picture”, the affidavits state.

He reiterated that both he and Peluso wanted ‘Howie’ dead.

The undercover trooper told Weaver he would contact him after he “took care of the body”.

Weaver was taken into custody after the meet-up.

Peluso told investigators it was Weaver’s idea to kill her stepfather and that she went along with it, according to the affidavits.

She later insisted that she didn’t mean it and only wanted him hurt.

They are being held at Lycoming County Prison in lieu of $1million bond.

The Beckhams 'jet to £5k-a-NIGHT resort' after Indonesian earthquakes
Amy Adams & Patricia Arquette both win Best Actress at Critics' Choice
Bruce Willis and wife Emma Heming splash out $9.8 million on sprawling palatial mansion
David Ortiz was shot by cops hired by a drug lord who thought he was having an affair with his wife
How can I tighten the skin around my mouth naturally?
Girl, 14, in custody in connection with murder of Philadelphia animal rescuer found 'tied to bed'
Bill de Blasio slams Domino's for 'exploiting' Times Square revelers by charging $30 a pie on NYE
Andrew Yang QUITS Democratic 2020 race