The greatest names on the UK music scene joined forces for ‘s fundraiser Big Night In on Thursday, in support of the battle against the pandemic.

Dua Lipa led the singers in delivering a passionate performance of Foo Fighters’ 2003 classic Times Like These as part of Radio 1’s biggest ever Live Lounge with the band’s head vocalist Dave Grohl, as well as fellow pop princesses Rita Ora and Ellie Goulding.

The one-off special, hosted by Lenny Henry, Davina McCall, Zoe Ball, Paddy McGuinness and Matt Baker, was held as a joint effort from Comic Relief and to raise money for charity amid the global crisis. 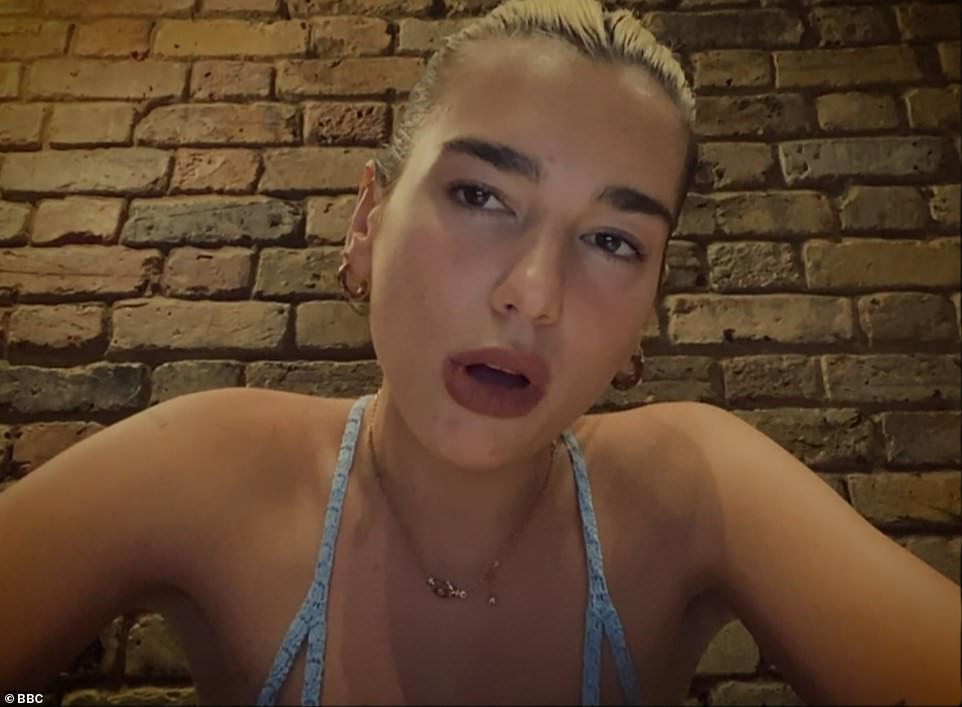 Leading the way: Dua Lipa delivered a passionate performance of Foo Fighters’ 2003 classic Times Like These as part of BBC Radio 1’s biggest ever Live Lounge for the broadcaster’s fundraiser Big Night In on Thursday

One Kiss artist Dua, 24, belted the timely lyrics to the American rock band’s track, which was originally released as part of their fourth studio album, One by One.

Going make-up free for her pared-back appearance, the songstress recorded her set from home, while Hot Right Now hitmaker Rita, 29, performed from a studio room, and Starry Eyed singer Ellie, 33, took to her guitar.

Following the epic singalong, Dua stressed the importance of ‘connecting with friends and family’ amid the nation’s lockdown. 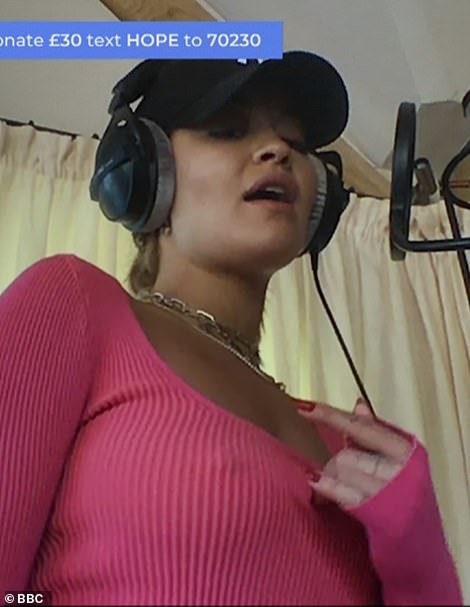 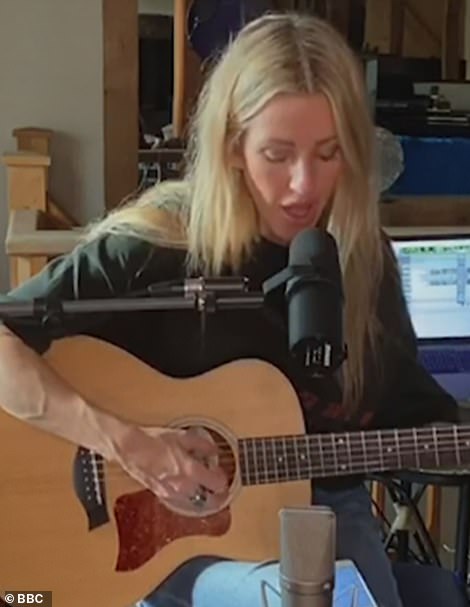 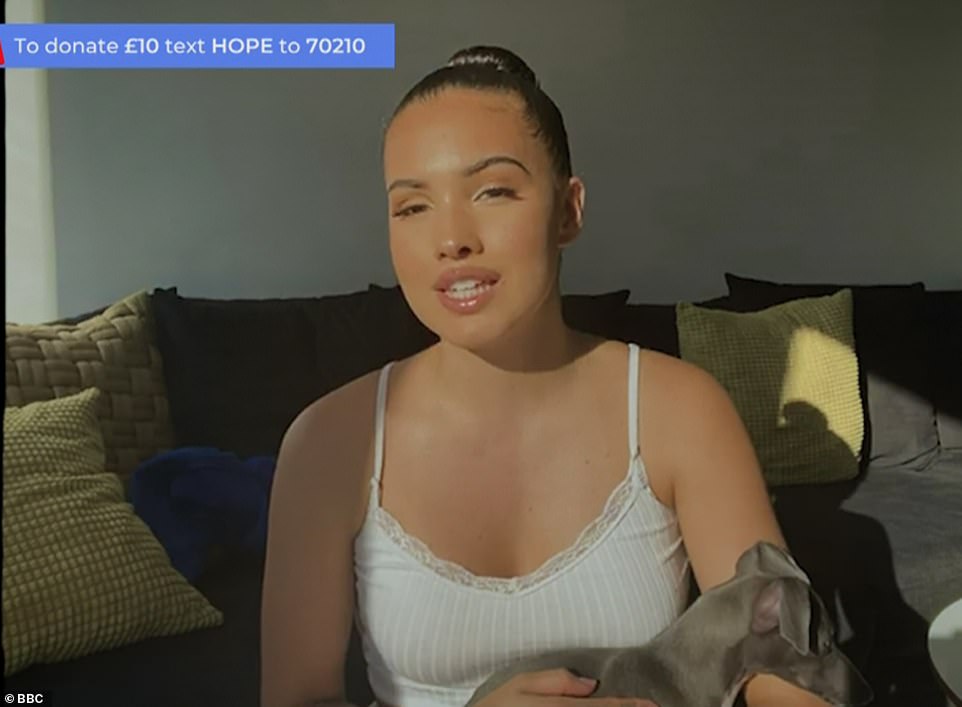 Special moment: The UK net profits from the charity single will be combined with any funds raised by The Big Night In and split equally between BBC Children in Need and Comic Relief (Mabel pictured singing while cradling her pet dog)

The New Rules singer told host Zoe: ‘First of all, it’s such an incredible song. It’s been important to connect with friends and family.

‘This way it has been so special to see so many artists get together and make it seem so seamless, like we’re in the same room. Everyone working so hard in wanting to create something so special, it’s amazing.’

Dave, 51, shared his delight at being approached to feature in the showcase, revealing: ‘Well I had very little to do with it, I got the call a few weeks ago that BBC wanted to put together this project.

‘I was so flattered that they would use one of our songs and get together with these artists, I got so emotional. It’s one of the biggest musical moments in my life. I wrote it at a strange time in my life, where I was scared but hopeful. This is huge for me.’

The Stay Home Live Lounge was produced by Grammy and Ivor Novello award-winning producer Fraser T. Smith, who is renowned for his work with Stormzy, Adele and many more, and counts seven UK No.1 singles and 18 No. 1 albums among his achievements. 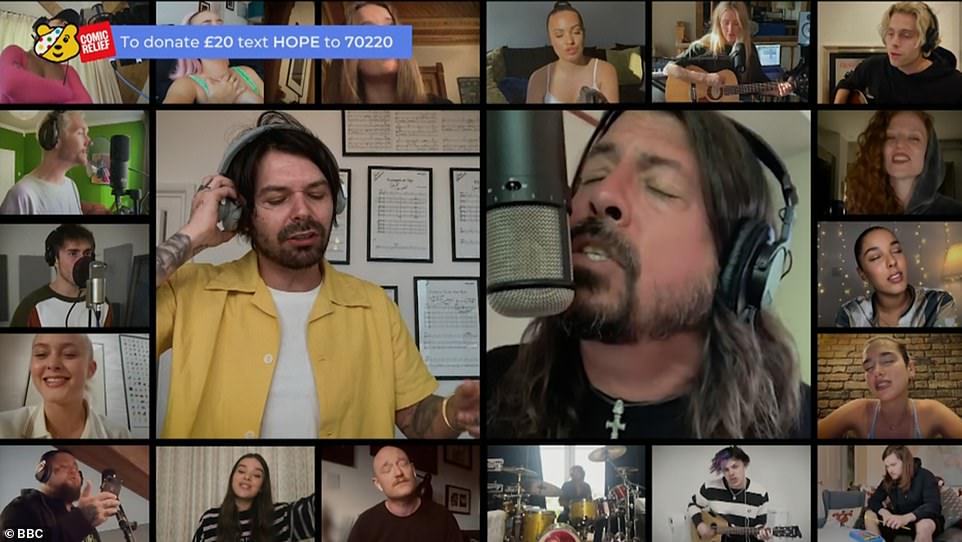 The UK net profits from the charity single will be combined with any funds raised by The Big Night In and split equally between BBC Children in Need and Comic Relief to provide essential support to vulnerable people of all ages and backgrounds across the UK who will be significantly impacted by the COVID-19 crisis. International net profits will go towards the WHO’s COVID-19-Solidarity Response Fund.

Award-winning singer Sam Smith kicked off the performances of the night from their £12million North  mansion with an emotional rendition of their hit single, Lay Me Down.

The artist, 27, stood in front of their bookshelf as they displayed their stellar vocals in the name of the fight against COVID-19.

The media personality appeared effortlessly cool in a loose-fitted white shirt, teamed with a selection of gold jewellery for their scaled-back showcase. 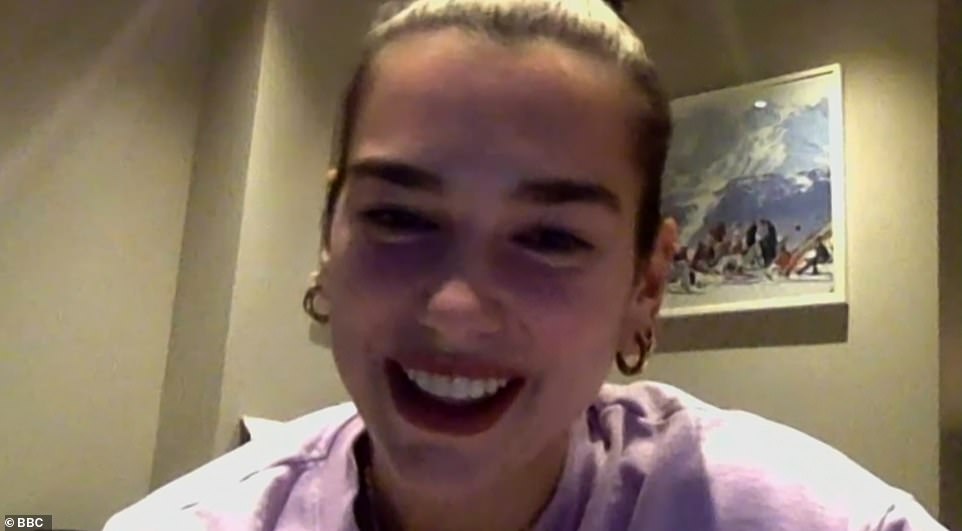 ‘It’s amazing’: Following the epic singalong, the New Rules singer stressed the importance of ‘connecting with friends and family’ amid the nation’s lockdown 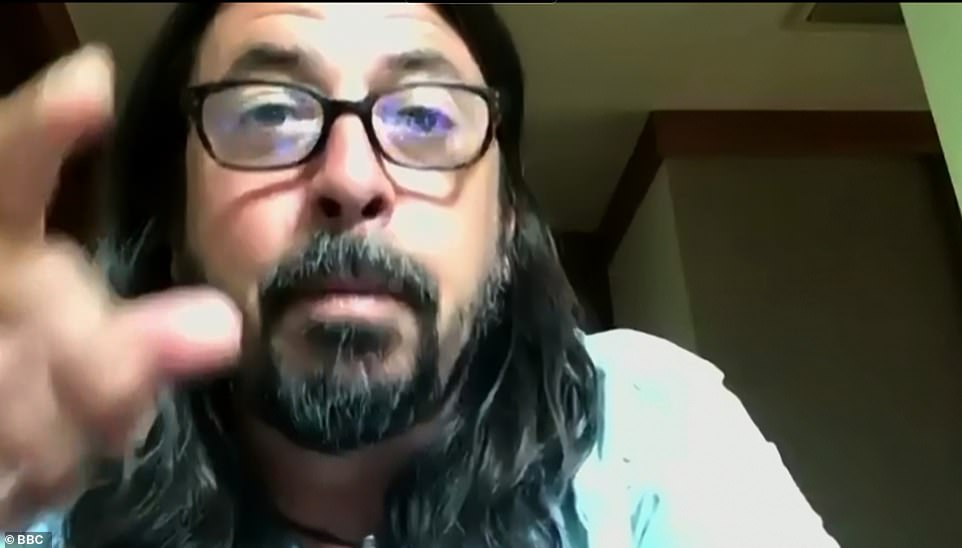 ‘I was so flattered that they would use one of our songs: Rock star Dave, 51, shared his delight at being approached to feature in the showcase

The show also saw comedy sketches from Little Britain’s David Walliams and Matt Lucas, the first in more than a decade.

The beloved sketch show initially began as a radio show in 2000 before it moved to screens in 2003 for three seasons until 2005.

The pair reunited for a few charity specials, the last of which was in 2009, as well as a special Brexit-themed episode on BBC Radio 4 last October. 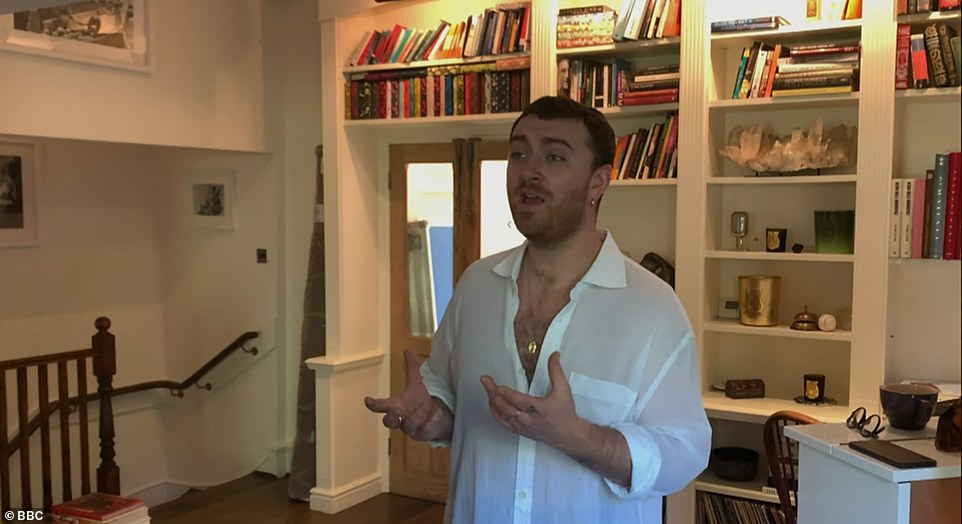 Great cause: Award-winning singer Sam Smith kicked off the performances from their £12million North London mansion with an emotional rendition of their hit single, Lay Me Down 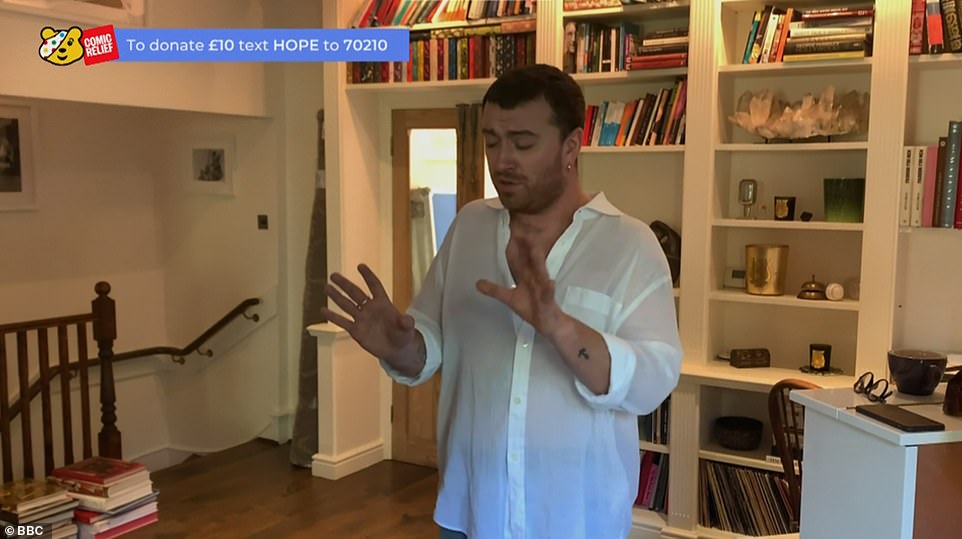 In the zone: The artist, 27, stood in front of their bookshelf as they showcased their stellar vocals to raise funds for the fight against COVID-19

In good company: The media personality performed with a pianist, who appeared to take to the keys in a studio for the single, which originally dropped in February 2013, before being re-released in February 2015

In January this year, David confirmed there would ‘definitely’ be more Little Britain, and revealed they had held talks with Netflix.

Dawn French also reprised her iconic role as Reverend Geraldine Granger (later Kennedy) after five years. The iconic sitcom ran from 1994 before coming to an end in 2000.

However, the characters made comebacks on several occasions, namely for the show’s 10th and 20th anniversaries and well as for Comic Relief – with the last appearance being in 2015.

Peter Kay’s performance served as his first television comeback since 2017 when his sitcom Car Share ended.

His (Is This The Way To) Amarillo performance also marked 15 years since he first released the original hit. 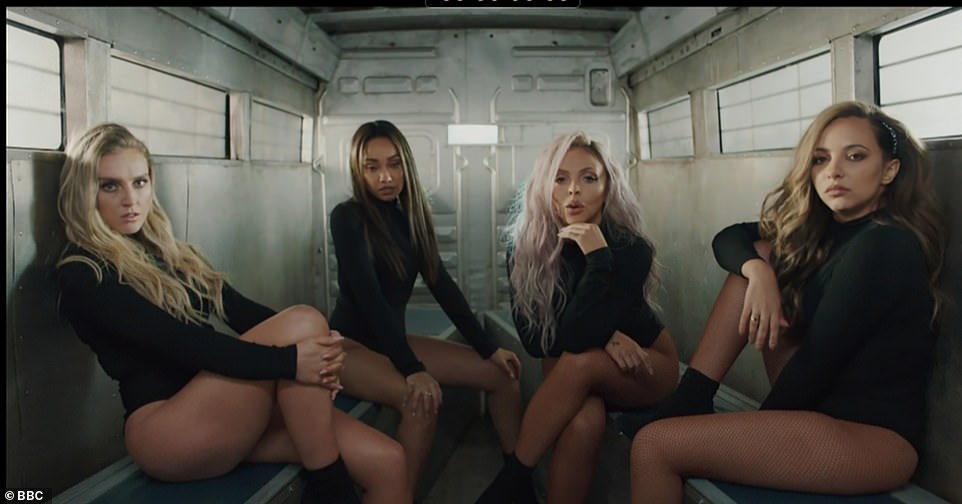 In 2005, the song spent seven weeks at number one, raising money for Comic Relief in the process.

The original video featured Peter Kay marching directly towards the camera on a treadmill joined by celebrities including Brian May, Ronnie Corbett, Michael Parkinson and Mr Blobby.

Leading the previous incarnation of the Doctor was Jodie Whittaker, who became the first ever Female Doctor when she took over the role in 2018.

Rounding out the stars were Peter Capaldi (2014 to 2017), and Jo Martin, who made history as the show’s first ever black Doctor during its 12th series this year.

Who fans are no stranger to Doctors collaborating, as along with David and Matt appearing together in the 50th Anniversary special, the episode also featured a surprise cameo from Tom.

Back in 1983, The Five Doctors saw Peter Davison appear alongside Tom Baker, Jon Pertwee, Patrick Troughton and Richard Hurndall, who took over the role of the First Doctor following William Hartnell’s death.

China Aug crude oil throughput lowest since Dec - Rtrs...
Nicolas Cage net worth
Factory worker dies after being buried in sand as distracted digger-driving colleague scoops her up
Melania Trump carried a Hermès bag worth £50K as she joined the President at Downing Street
Archbishop of Canterbury could chair a citizen's assembly to avoid No Deal Brexit
Dodi Fayed's superyacht where he entertained Diana goes on sale for £171,000
Coronavirus UK: Two-thirds think there'll be a second lockdown
Coastguards rescue 49 migrants including 13 children from Banksy's rescue boat