World heavyweight champion has been spotted out on a bike ride with friends – despite the lockdown.

The 30-year-old pugilist was filmed on Instagram with three other people, despite measures introduced by the government saying you should not meet others, even family or friends.

The footage, put online by model , shows the boxer off his road bike filming on his phone while two other people wait nearby ready on their bikes at a car park in the village of Garston, in Hertfordshire.

This is despite announcing a ban on gatherings of more than two people – excluding people from your household – just three weeks ago.

The video then shows the group – who are not thought live with Mr Joshua – riding on empty roads in the Bank Holiday sunshine. 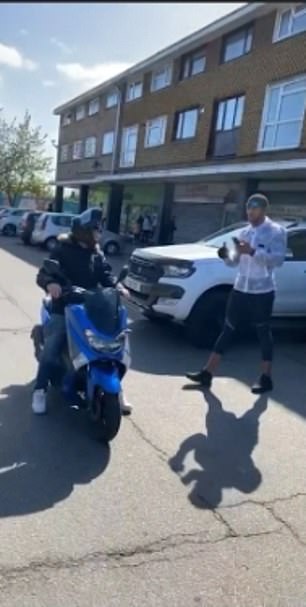 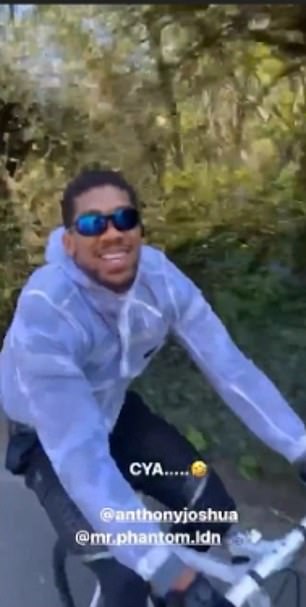 Then Mr Lewis, who is filming, pans to a smiling Mr Joshua, in what appears to be closer than two metres and shouts ‘seeya’, then races up the road.

The social distancing measures from the government say you should stay at least two metres away from other people when out in public.

A spokesman for Anthony Joshua told MailOnline: ‘Anthony was out cycling to keep up fitness levels.

‘He was met by two local cyclists on his route and decided to join them, however, this was not a pre arranged gathering and he did his best to maintain and stick to the guide lines but he can not be liable for the proximity of others while cycling.

‘He acknowledges in hindsight this may not have been the best course of action but he will learn from it and hopes others can learn from it to.’ 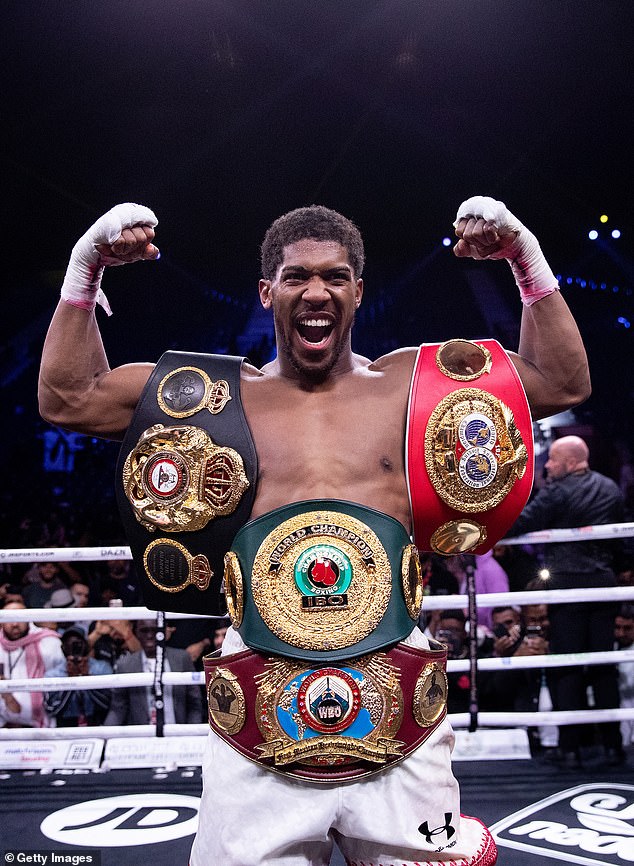 Anthony Joshua poses for a photo with the IBF, WBA, WBO & IBO World Heavyweight Title belts after his fight with Andy Ruiz in December

The 6’6 puncher is not the first athlete to be in hot water after being caught not following the lockdown rules.

Last week footballer Kyle Walker was forced to apologise after he hosted a sex party with two escorts.

The footballer, 29, and a friend, paid £2,200 for Louise McNamara, 21, and a 24-year-old Brazilian call girl to visit his Cheshire home on Tuesday.

Boris Johnson announced a lockdown plan three weeks ago to stem the spread of the coronavirus in the UK as he told the nation to stay at home.

People will only be allowed to leave their home for the following ‘very limited’ purposes:

Shopping for basic necessities as infrequently as possible.

One form of exercise a day.

Any medical need, to provide care or to help a vulnerable person.

Travelling to and from work, but only where this is absolutely necessary.

Meanwhile, the PM has announced a ban on:

Meeting with family members you do not live with.

All weddings, baptisms and other ceremonies but excluding funerals.

All gatherings of more than two people in public.

The PM said the police will have the powers to enforce the lockdown measures through fines and dispersing gatherings.

To ensure people comply the government is also:

Closing all libraries, playground,  outdoor gyms and places of worship.

Parks will remain open for exercise, but will be patrolled.

Just a day before that the footballer had urged his Instagram followers to stay inside to protect the NHS.

It comes as Joshua’s fellow-heavyweight rival superstar Tyson Fury challenged him to a home workout.

Each day Fury and wife Paris have been hosting a live exercise class for their followers on social media every during the shutdown, with the Gypsy King explaining how he wanted ‘celebrity couples’ to get involved.

Fury, who beat Deontay Wilder to take the WBC heavyweight title in February, named Joshua as one potential challenger – and later confirmed fellow boxer and brother Tommy and partner Molly Mae Mague would be the first couple to take part on Tuesday.

Speaking on his Instagram Live, Fury said: ‘I’ve had a brainstorm, everybody wait for this.

‘The brainstorm is – I think we need to get a few celebrity appearances on the ‘Gypsy King’s’ workouts.

‘So I wonder who we would like and who we could get involved to give the fans a real treat of what would be quite exciting and fun to do.

‘I’m going to have a look through my phone book in a minute, and see who I can find to join us in these live workouts on a morning time this week, starting from tomorrow I’m going to try and get another couple to join me live on Instagram without with the Gypsy King and I wonder if they are up for it.

‘I’ve got a few favourites who I’d like to maybe get on and I’m gonna see if I can get them.

‘It’s all in good cause, innit? Keeping the public healthy, keeping them well, give them motivation to get up in the morning Who could we get on first tomorrow? Who do we want on?’