Europe could be close to herd immunity from already, with far more people infected than previously thought, according to a study in .

Scientists studying Gangelt, the town at the centre of Germany’s first big outbreak dubbed the ‘German Wuhan’, discovered that as many as 15 per cent of people may have already been infected with the virus and acquired immunity.

They said yesterday that they had found antibodies to the virus in people who had shown no symptoms of coronavirus, boosting hopes that the spread is slowing.

If 15 per cent of people do have antibodies, then Germany’s actual death rate could be as low as 0.37 per cent.

This is five times lower than the current level. 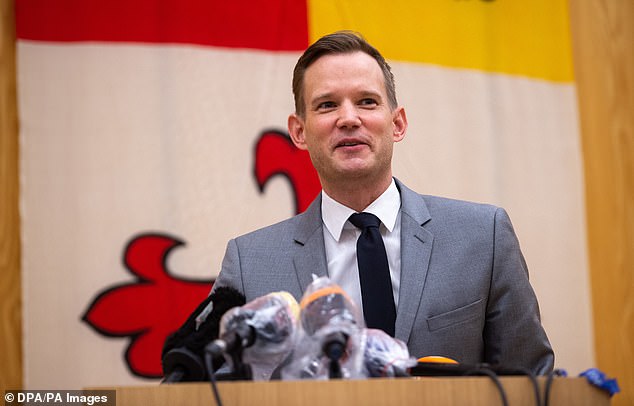 Professor Hendrik Streeck, the virologist leading the study, told a press conference: ‘This means a gradual relaxation of the lockdown is now possible.’

However, Angela Merkel has previously warned that the country ‘must not be reckless’.

Prof Streeck’s study, near the Dutch border, is Europe’s first to look at the impact of the virus on an entire community.

It involves scientists from the University of Bonn testing 1,000 people from 400 households in Gangelt for antibodies.

Their initial results, after around half of the tests, found two per cent of inhabitants were currently infected, and 14 per cent had antibodies to the virus.

This means that up to 15 per cent of the town’s inhabitants could have immunity, with previous estimates putting the figure at five per cent.

Prof Gunther Hartmann, a member of the study, said: ‘The 15 per cent is not that far from the 60 per cent we need for herd immunity. 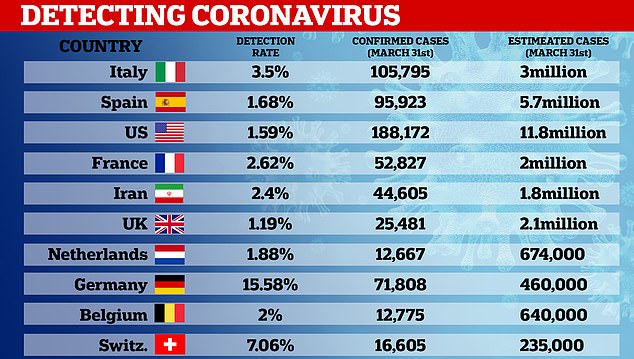 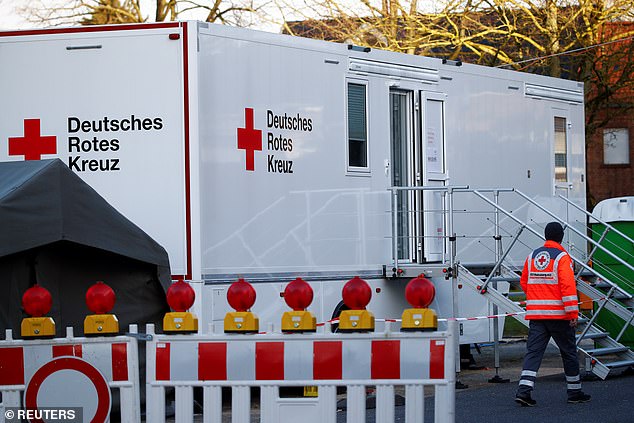 ‘With 60 to 70 per cent herd immunity, the virus will completely disappear from the population. Then, the elderly are no longer at risk.’

The scientists are confident that their findings could be close to real figures as they were able to identify so many previously unknown cases of people having the virus.

The German army will donate 60 mobile ventilators to the NHS in the battle against coronavirus.

The donation comes after the UK called for help in ensuring the NHS is well-equipped for expected mid-April peak of the pandemic.

The German defence ministry confirmed the donations and said it would send 60 pieces of the life-saving equipment as soon as possible.

Because of the UK’s desperation, the German ministry said it would not invoice the UK for the ventilators.

They are are made by two specialist German manufacturers, Dräger and Weinmann.

An immunity rate of 15 per cent is already enough to slow the spread of the virus significantly, they added.

However, they admitted that all governments need to collect more data as the world still doesn’t know enough about the virus.

Last week, research conducted by Prof Streeck showed that the home of one infected family did not have ‘any live virus on any surface’, adding even more questions as to how the virus is spread from person to person.

Prof Streeck said the virus had not even been found on door knobs or animal fur.

He stressed there were still unknowns about how it is actually spreading.

Meanwhile, other German scientists studying the pandemic revealed that tens of millions of people could have already caught the .

Two researchers from Göttingen University claimed countries have only spotted six per cent of all COVID-19 cases, on average.

But the team also claimed that the rate was even lower in the UK, at just 1.2 per cent – suggesting the true size of the outbreak was up to 5million. 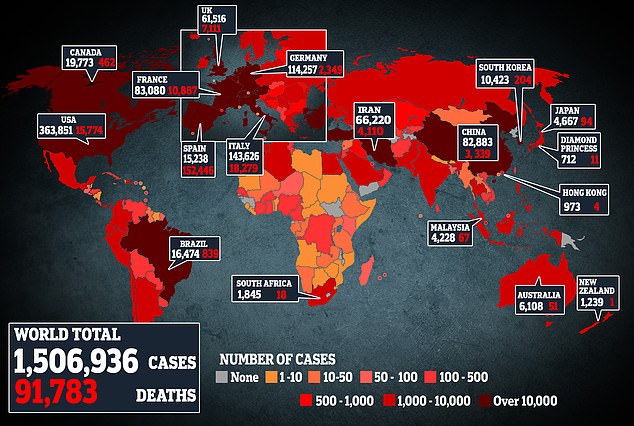 The latest figures from the John Hopkins University reveal more than 90,000 have died from Covid-19.  The counter uses a real-time tracker and is being treated as the most comprehensive toll of coronavirus statistics

Because of the huge disparity, they described the official tallies trotted out by health ministers across the world each day as ‘rather meaningless’.

Earlier, the UK’s Chief Scientific Adviser Sir Patrick Vallance admitted that a third of people worldwide who have had coronavirus may have shown no symptoms.

These are people who can act as ‘carriers’ because they spread the virus without knowing they have it.

Self-isolation cannot be used for them because they have no telltale signs like a cough or fever.

However Sir Patrick said the percentage of people infected in different countries appears to be in ‘single-digit’ numbers, from early information.

That could mean only a small proportion of people in the UK have already had the virus and are potentially immune to it.

NYPD cops subjected to foul-mouthed tirade after 911 name in Bronx, decided NO arrests needed
Sarah Palin is NOT invited to John McCain's funeral
Missing hiker, 54, found dead on Arizona mountain after falling off a cliff and into a ravine
Miss America ratings drop by a MILLION viewers in first year with no swimsuit
Missouri University says a man asking out a woman who's smaller than him could be SEXUAL HARASSMENT
Jared Kushner gets a sweet send-off from Arabella on his tenth anniversary
US bus urges public to 'call FBI' if they see Prince Andrew
The American way of life has changed: List of states on lockdown in the battle against coronavirus