The Prince of Wales has once again offered royal fans a rare look inside the Scottish home he shares with the Duchess of Cornwall.

, 71, appeared via video link today to personally open the new , which has been erected in to help treat patients.

The video was filmed in the drawing room of Birkhall, the prince’s residence on Balmoral, the Queen’s estate in Aberdeenshire. The home previously belonged to Charles’ much-loved grandmother, the Queen Mother.

Following the TV appearance, Clarence House released a photograph of Charles recording the message. A close look at the image reveals how Charles has surrounded himself with fresh flowers, animal trinkets and family photographs that span several generations.

Here, a look at what we can learn about the prince from his private drawing room. 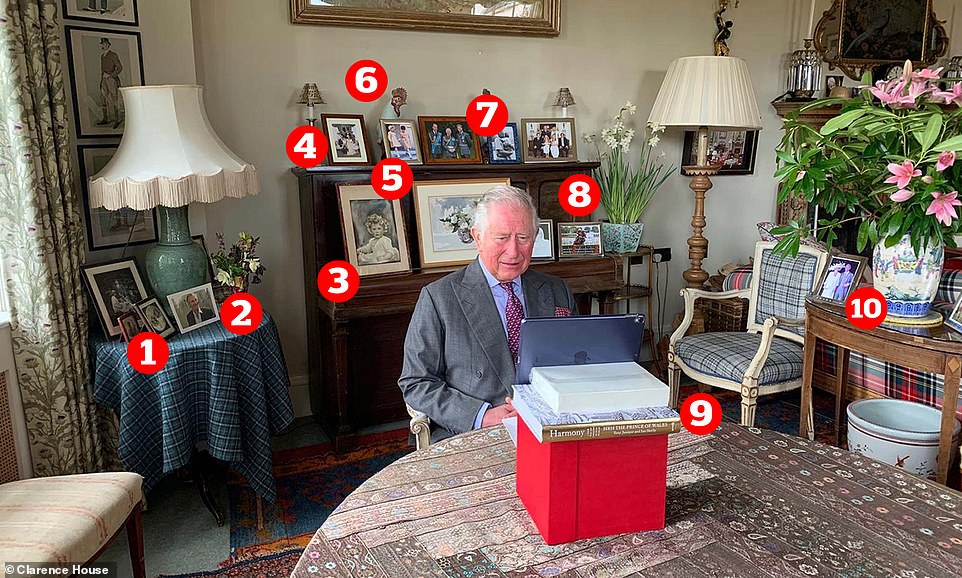 1. Portrait of Princess Elizabeth and Princess Margaret as children

Tucked away in the corner of a side table is a sweet photograph of the Queen and her sister, Princess Margaret, as children. Their Majesties are seen wearing matching white dresses as they smile for the camera. The royal sisters posed for a number of formal portraits growing up, often positioned with one sitting slightly higher than the other.

Adding a touch of normalcy to the royal residence is a simple vase of wild flowers that appear to be in their final days. Prince Charles is a keen gardener and has taken particular interest in cultivating the grounds of Birkhall, which were designed and planted by his grandmother. Plenty of flowers are grown in the gardens and it is very likely this bunch were picked on site, perhaps to give the prince a boost as he battled coronavirus.

3. Portrait of a young Princess Elizabeth 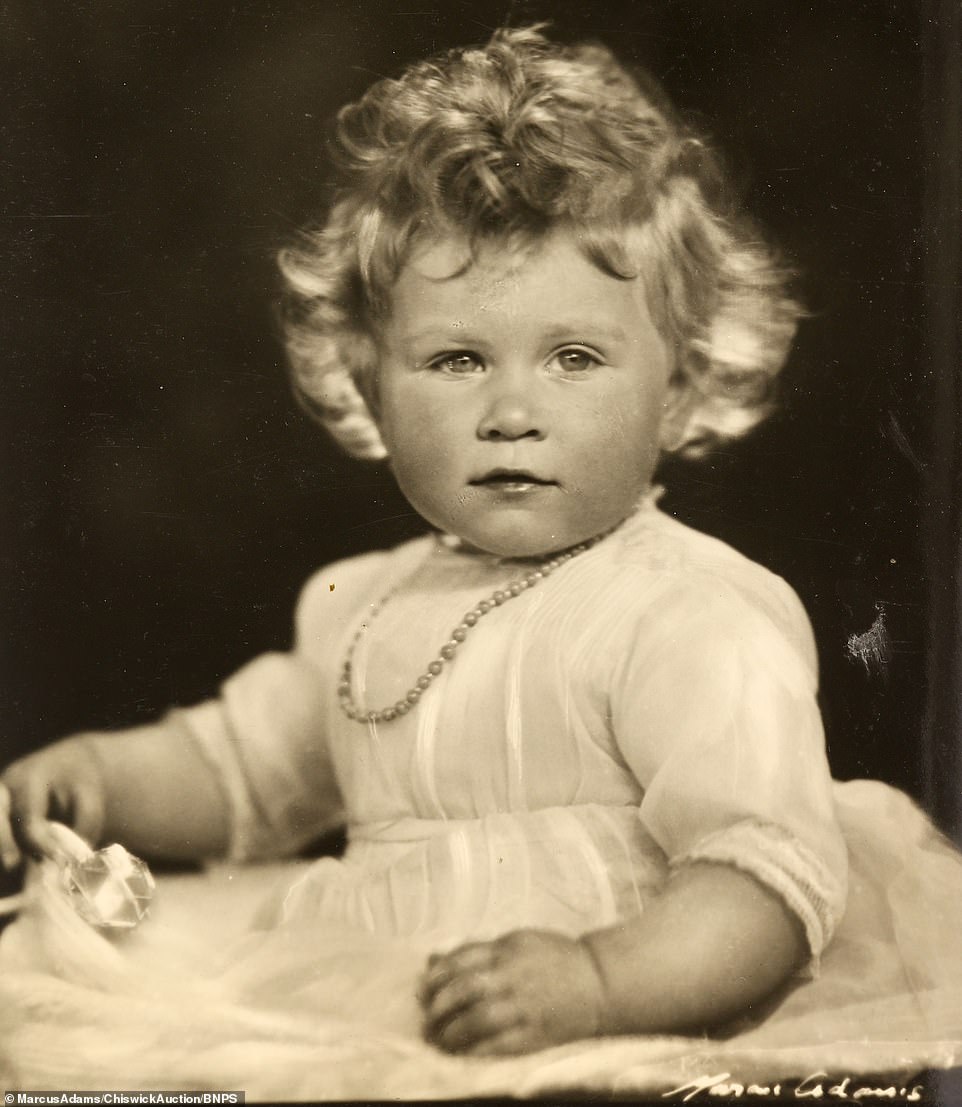 Young princess: This beautiful black and white photograph of the Queen as a toddler was taken by Marcus Anderson in 1927

This beautiful black and white photograph of the Queen as a toddler was taken by Marcus Anderson in 1927. Then just 15 months old, the princess gazes into the lens while clutching onto a toy she has been given to hold. The young princess was dressed in a white smocked dress and a delicate string of pearls for the photograph. Her grandmother, Queen Alexandra, and her mother, the future Queen Elizabeth, appear in other photos in the series. 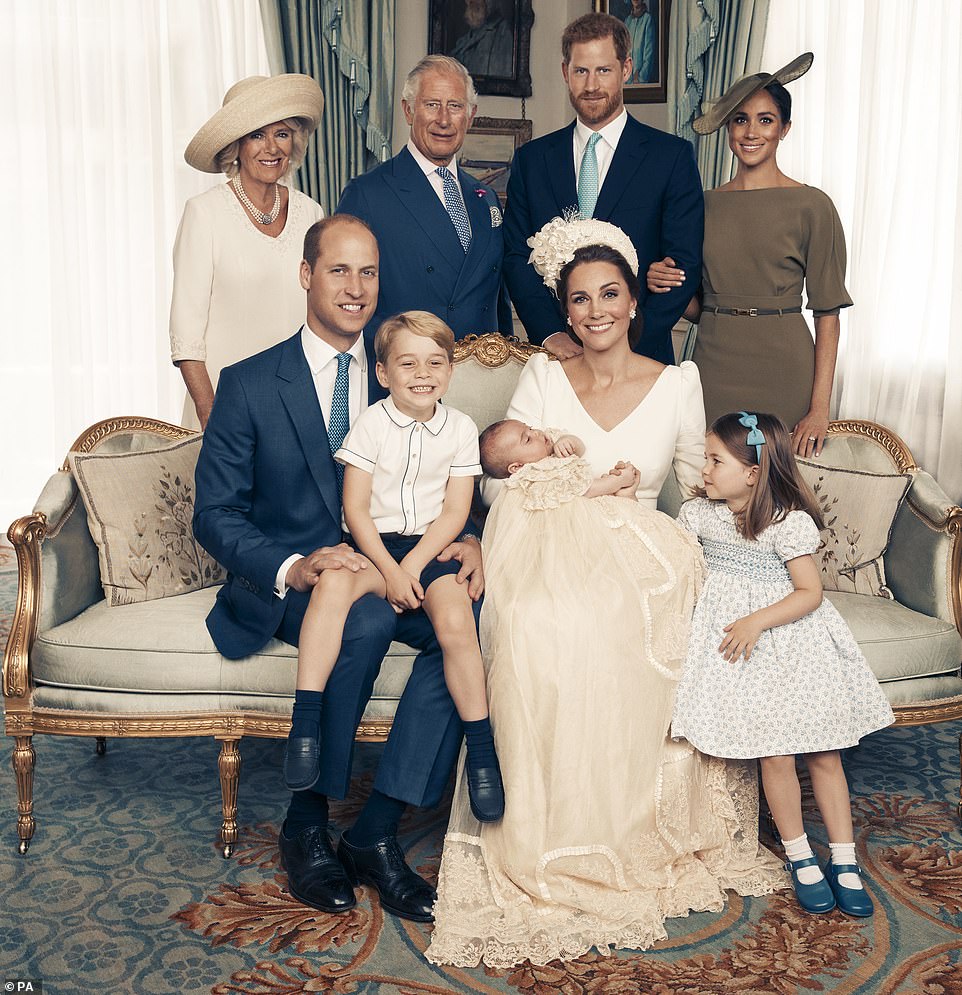 Family photo: This official photo from Prince Louis’ christening in July 2018 sits on top of the upright piano

On top of the standing piano is a family photo, taken at Prince Louis’ christening in July 2018. The photo shows the Duke and Duchess of Cambridge sitting on the settee with Prince George and Prince Louis, who is in his mother’s arms. Princess Charlotte stands at her mother’s side. Behind the Cambridges are Prince Charles, the Duchess of Cornwall, Prince Harry and Meghan Markle. The photo was taken in the morning room at Clarence House.

5. Photo of Prince Charles and Princess Anne as children 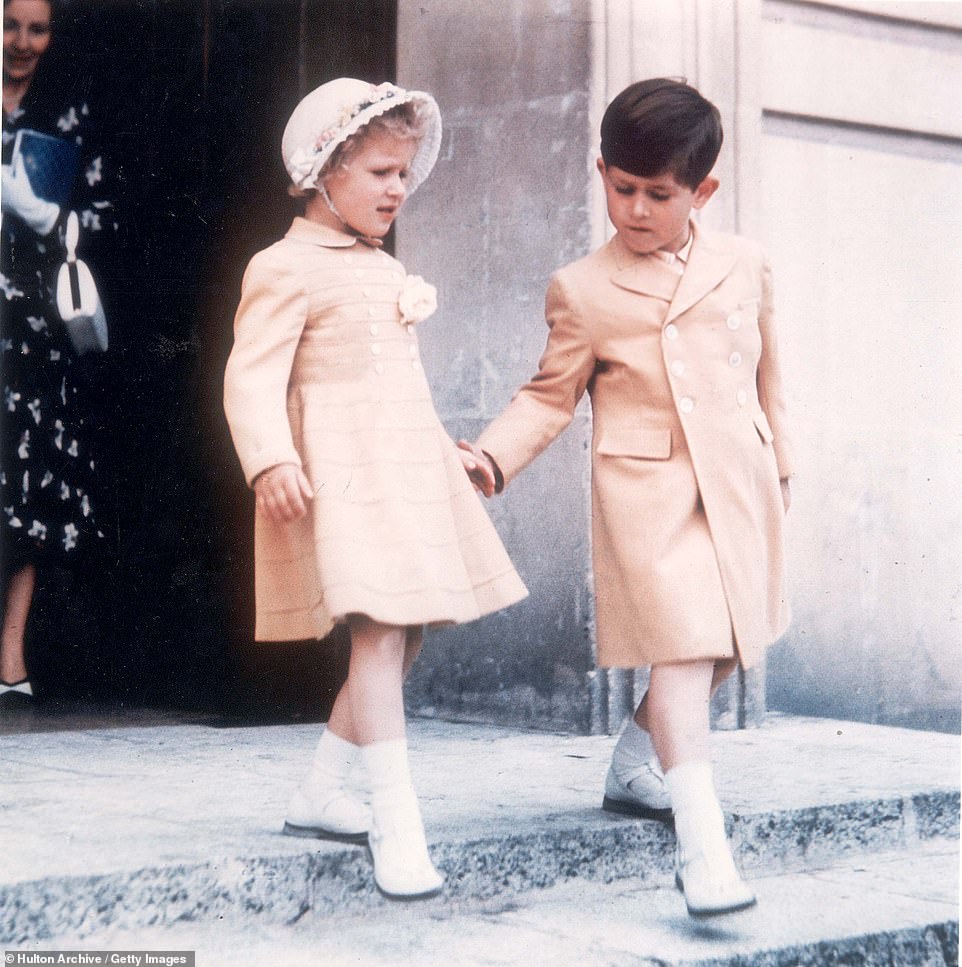 Childhood memories: This photo shows Prince Charles and his younger sister Princess Anne on a visit to Malta in 1954

This photo shows Prince Charles and his younger sister Princess Anne on a visit to Malta in 1954. The royal children were taken out to the island to meet their parents following a royal tour. The image shows the siblings dressed in matching outfit and captures Prince Charles holding out his hand for Anne to help her down the steps.

6. A pair of ceramic hens

Sitting on top of the piano among the framed photographs are a pair of ceramic hens. The playful decorations hint at Charles’ love of farming and the outdoors, as well as his and Camilla’s jovial natures.

This photo is likely to bring back warm memories for Prince Charles. It shows him standing in the middle of his sons, William and Harry, all with smiles on their faces. The photograph was taken in the summer of 2018 to mark the RAF centenary celebrations and appeared on a commemorative stamp to mark Charles’ birthday that year.

Serving as a sideboard for the personal family photographs is an upright piano that does not appear to be well used. The Queen Mother was an accomplished piano player and it is likely this was her addition to the house.

9. Harmony: A New Way of Looking at Our World by Prince Charles

Like many people working from home, Charles needed to improvise when it came to creating a stand for his iPad. To keep the device upright, he selected a copy of his own book, Harmony: A New Way of Looking at Our World, which was released in 2010. The book focuses on the world’s environment and touches on climate change, architecture and agriculture.

10. Photo of Prince Charles and the Duchess of Cornwall

On the side table there is a photograph of Prince Charles and the Duchess of Cornwall at a formal occasion. Camilla is striking in a wide-brimmed hat while Prince Charles looks dapper in a morning suit. It is not clear where the photo was taken but the outfits suggest it might have been Prince Harry and Meghan Markle’s wedding.

Police admit failing to collect vital evidence from where Rod Covlin 'murdered' financier wife
Sydney Monfries: Fordham student posted final video on Snapchat before death
Kitten travels from China to Italy by accident after being trapped in a container for 45 days
Emily Ratajkowski reveals the $25 Australian self-tanning product she swears by
Duchess reveals charities and 'inspiring' public her Instagram account will now follow
California father became the first black man to get a face transplant
Donald Trump launches new attack on Chuck Schumer over 'threats' to Supreme Court Justices
Prince Harry signs off from all he has known