Spain has suffered another record-breaking day of coronavirus deaths, with 950 people killed by the disease in the last 24 hours.

It marks the country’s third consecutive day of record death totals, with 849 dead on Tuesday, 864 killed Wednesday and 950 dying between Wednesday and today.

The number of new cases also increased by 8,102 in the last 24 hours, bringing the total from 102,136 to 110,238, but marks the lowest percentage increase in cases yet – in a sign that lockdown measures put in place almost three weeks ago are working. 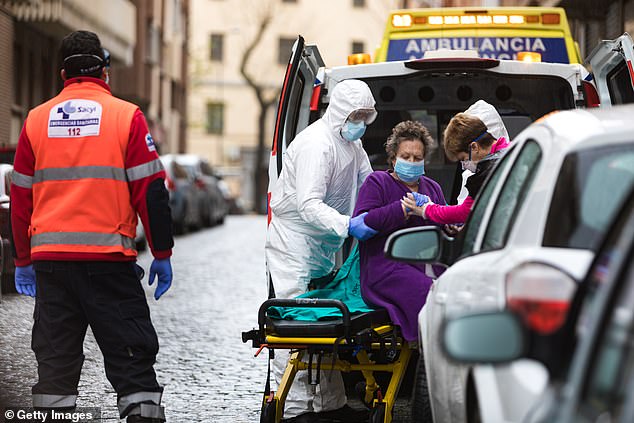 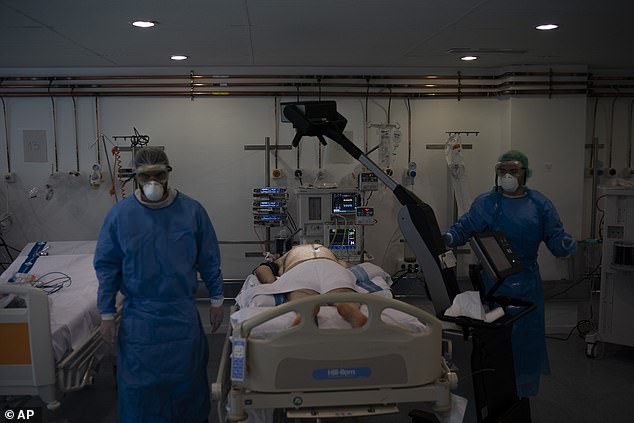 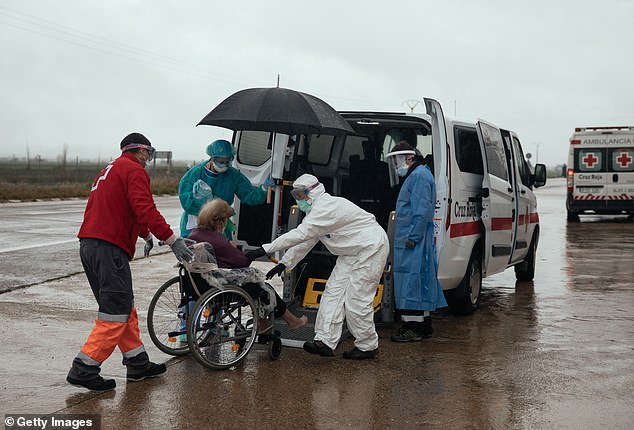 The rate of increase was 42.7 per cent on March 13, the day before the lockdown was put in place and has gone as high as 200 per cent during the crisis.

Reducing the rate of infection is key to beating the virus, because each day of increases compounds on the number of cases the day before.

Those sudden increases are what lead to healthcare systems becoming overwhelmed, which in turn increases the rate at which people die as key equipment such as ventilators runs out.

Officials have said that the virus now appears to be reaching its peak in Spain, though pressure on hospitals will remain high in the coming days.

A third of Spanish regions report their intensive care units are at or near capacity, meaning the crisis in hospitals is unlikely to ease until the end of this week or early next week.

A 101-year-old woman was applauded by nurses and doctors as she was discharged from hospital in northeastern Spain after making a recovery from the coronavirus yesterday.

The woman, named Encarnacion, was released from the San Jorge de Huesca hospital in the Biescas municipality after battling COVID-19. 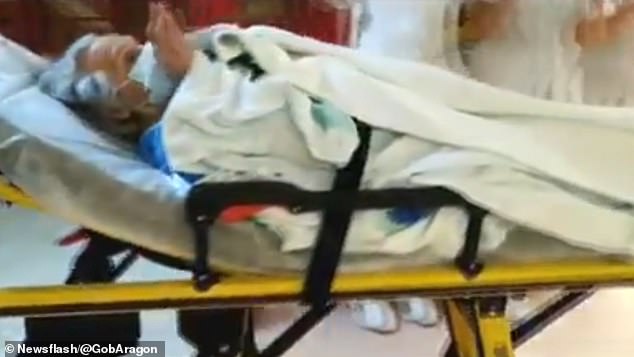 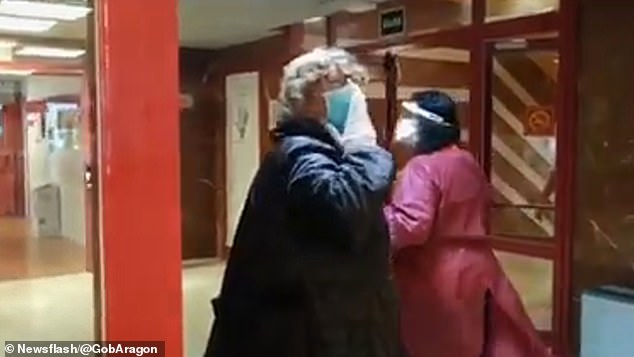 The woman, named Encarnacion, was released from the San Jorge de Huesca hospital in the Biescas municipality after battling COVID-19 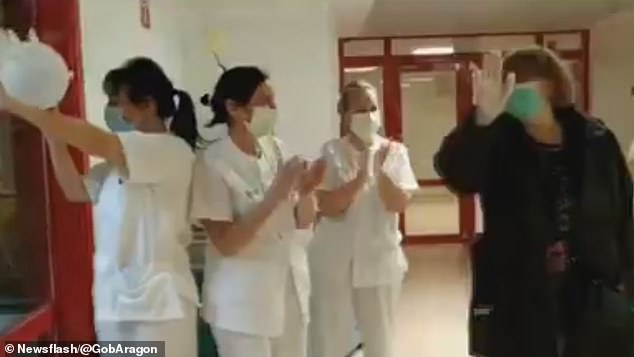 The 101-year-old was pictured waving at hospital staff as she was pushed through the doors. Her daughter Mari Carmen also showed her gratitude by waving and blowing kisses at the

The 101-year-old was pictured waving at hospital staff as she was pushed through the doors. Her daughter Mari Carmen also showed her gratitude by waving and blowing kisses at them.

That is compared to just 1,192 deaths and 36,347 infections when the World Health Organisation declared the continent the new virus epicentre on March 13. 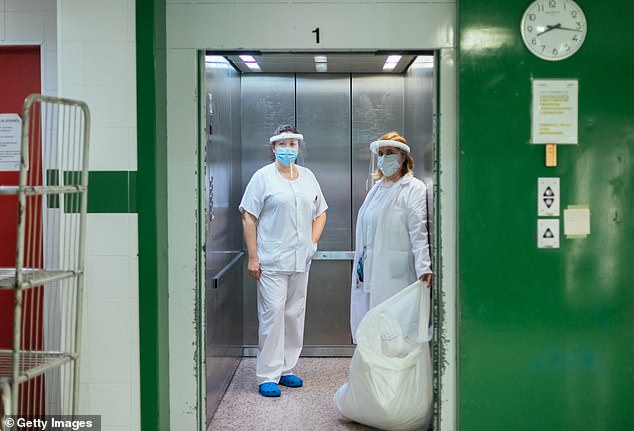 Health workers at hospital San Jorge, in northern Spain, board an elevator wearing protective masks because a number of coronavirus cases are being treated there 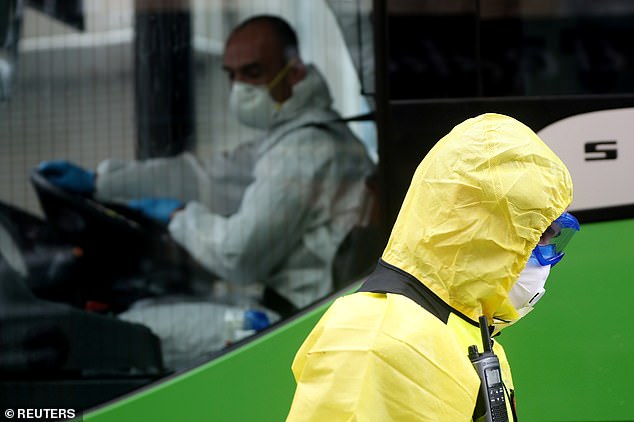 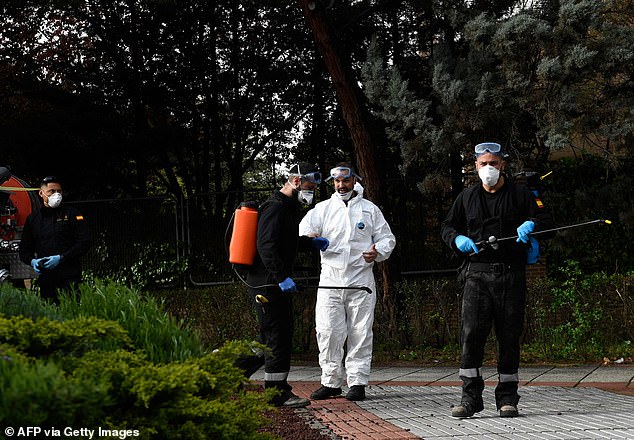 Deaths are also starting to rapidly increase in France and Germany, which have both seen steep increases in the last 24 hours.

The Robert Koch institute announced Wednesday that 149 more people had died from the virus, bringing yesterday’s tally of 583 fatalities to 732, an increase of more than 25 per cent.

It also brings Germany’s mortality rate up to over 1 per cent for the first time – still lower than most of its European neighbours, but up from 0.4 per cent a week ago.

Meanwhile the total number of infections in Germany rose by 5,453, bringing the total from 61,913 recorded yesterday, to 67,366 today.

Germany had been widely praised for using extensive testing and contract-tracing measures in order to contain and isolate the virus, though there are now fears those measures have not proved as effective as hoped.

Meanwhile France struggled through its darkest 24 hour period between Monday and Tuesday, with 499 dead from the virus – the largest number since the virus broke out there earlier this year. 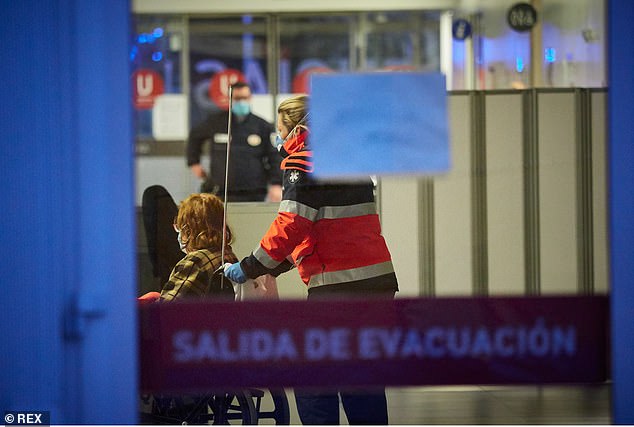 An emergency worker pushes a person with suspected coronavirus into a hospital in Madrid, which is the city that has been hit hardest by the outbreak 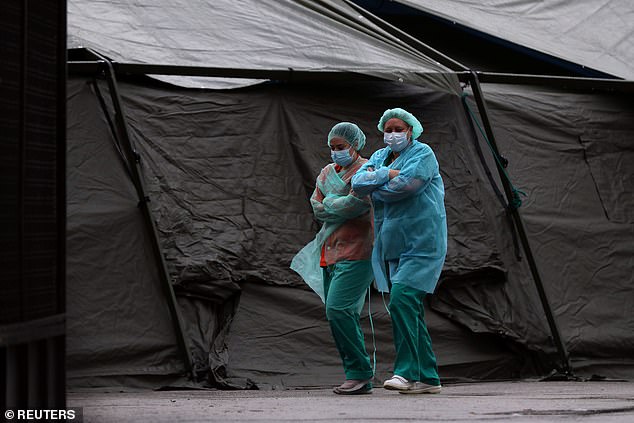 Medical staff wearing protective face masks and suits walk past a tent at Gregorio Maranon hospital, in Madrid, which has been hit hard by the crisis

Spain is two-and-a-half weeks into a national lockdown with stay-at-home rules for all workers except those in health care, food production and distribution, and other essential industries.

The country is frantically working to add to the number of intensive care units in hospitals which are quickly filling up in the country’s hardest-hit regions.

Spanish authorities are bringing into the country 1,500 purchased ventilator machines and asking local manufacturers to ramp up production, with some creative solutions employed, such as snorkeling masks repurposed as breathing masks.

Spain has already boosted its hospital beds by 20 per cent.

Dozens of hotels across Spain have been turned into recovery rooms, and authorities are building field hospitals in sports centers, libraries and exhibition halls.

Europe’s greatest need at the moment, however, is intensive care units, which are essential in a pandemic in which tens of thousands of patients quickly descend into acute respiratory distress.

Those ICU units are much harder to cobble together quickly than standard hospital beds.

Milan opened an intensive care field hospital Tuesday at the city fairgrounds for 200 patients, complete with a pharmacy and radiology wards. It expects to eventually employ some 900 staff.

The move came after the health situation turned extreme in Italy’s Lombardy region, where bodies overflowed in morgues, caskets piled up in churches and doctors were forced to decide in some cases which desperately ill patient would get a breathing machine.

Actor Dudley Sutton dies aged 85: Colleagues pay tribute to Lovejoy's Tinker
Mother's fury after sickening footage of 'bully', 16, kneeing her 13-year-old daughter in the face
Prince Harry arrives at Oxford Children's Hospital - and is presented with a teddy for baby Archie
Second peer suspended by Tories for backing Lib Dems in Euro elections as Labour lord also rebels
'World first' footage of mother and child chimpanzees catching crabs in the wild
Jose Antonio Reyes' coffin is carried through the streets of his hometown before funeral in Spain
'Those aren't boobies, they are muscles': Boris Johnson corrects boy's cute Incredible Hulk error
Strife begins at 40! Britons fear their bodies start to fail as they enter fifth decade