said Thursday that he planned to ‘kiss’ the USNS Comfort goodbye as it sets sail for to aid the city with the crisis.

‘I think I’m going to go out and, I’ll kiss it goodbye, I’ll go to – it’s in Virginia as you know, and I will go and we’ll be waving together, because I suspect the media will be following,’ Trump told reporters at the White House briefing.

Several moments after the president made the comments, the White House announced that he was serious and would travel to the Norfolk Naval Station on Saturday to ‘bid bon voyage to the hospital ship,’ a release to the press said. 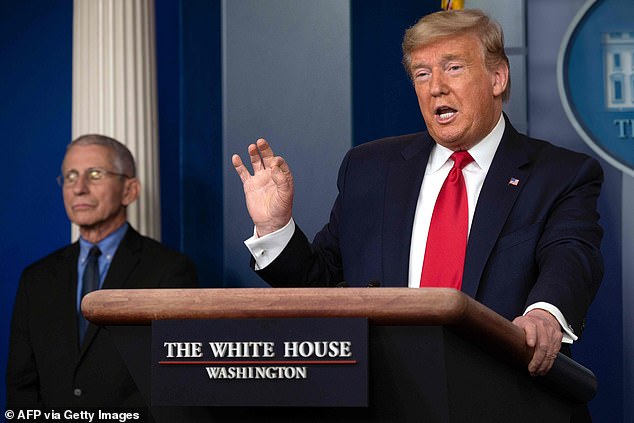 President Trump announced Thursday that he would go ‘kiss’ the USNS Comfort goodbye on Saturday, as the White House confirmed he would travel to Norfolk, Virginia to watch the hospital ship set sail to New York City 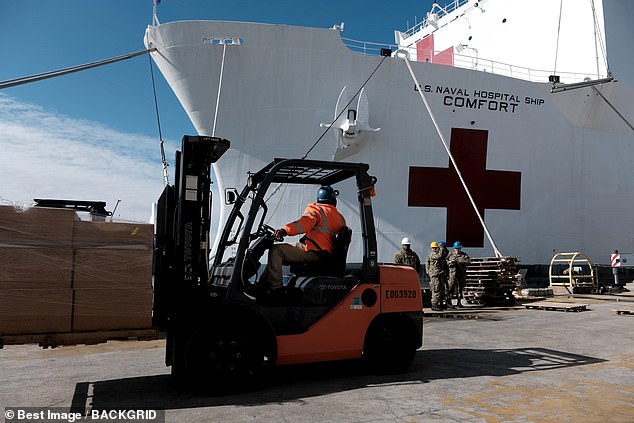 The hospital ship Comfort will set sail for New York City on Saturday and should arrive Monday, a little under two weeks since President Trump announced he would utilize Comfort and the west coast anchored Mercy

Judd Deere, a spokesman for President Trump, confirmed the president would be leaving Washington, D.C. for the first time since March 9. All planned travel in March was cancelled due to coronavirus concerns 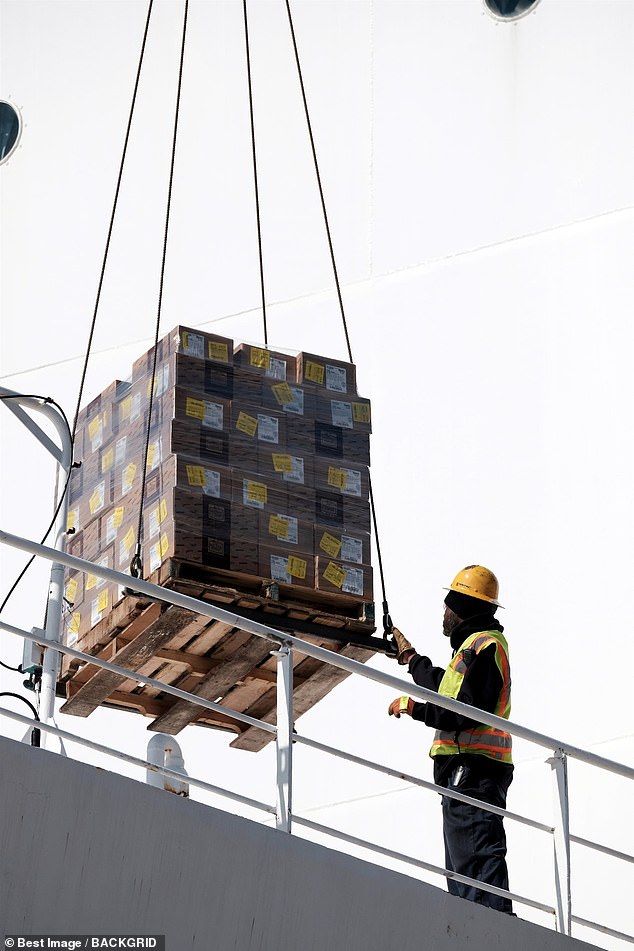 Supplies are being loaded onto the deck of the USNS Comfort in Norfolk, Virginia on Tuesday as the ship is readied to deploy to New York City to offload non-COVID-19 patients from the city’s hospitals

The trip will mark the first time since the president has left Washington since March 9, when he hopped over to the suburbs of Orlando, Florida from his Palm Beach estate Mar-a-Lago to raise funds for his re-election campaign and then headed back to the White House.

A subsequent trip scheduled for that week – to Las Vegas for fundraising and a Republican Jewish Coalition speech – was canned due to coronavirus concerns.

Trump has been in D.C. ever since.

The president initially announced that hospital ships Comfort and Mercy would be used during the pandemic on March 18.

At the time Pentagon spokesperson Jonathan Hoffman could take two weeks to deploy because maintenance was being finished up.

Trump said in the briefing room that the Comfort was way ahead of schedule.

‘So it’s going to be leaving on Saturday instead of three weeks from now,’ the president said.

The ship will depart four days ahead of schedule, according to the Pentagon’s two-week initial estimate.

The ships won’t be used for patients who have COVID-19, the disease caused by the coronavirus, but will instead provide beds for other sick patients to clear room in the cities’ hospitals.

The USNS Mercy is sailing to Los Angeles from Naval Station San Diego and is expected to arrive Friday.

In the briefing room, the president invited the press along with him on the trip to Virginia.

Trump complains about 'rumor put out by the Democrats' that Senate candidate left his speech early
Knifeman is shot after stabbing policeman in Belgium 'while shouting "Allahu Akbar"'
Nanny accused of trying to kill baby by shoving a wipe down the boy's throat is found GUILTY
£100 million super-yacht once owned by Low Taek Jho to become this summer's Mediterranean party
Donald Trump claims CIA agent was 'partisan operative' and not a whistle-blower at all
Steve Irwin's best mate John Stainton breaks his silence
Genius, 14, wins $25,000 for car design that would install cameras to make blind spots nonexistent
CDC director warns a second wave of coronavirus next winter could be 'even more difficult'