Buckingham Palace yesterday released a photo of the Queen on the phone to Prime Minister in a move to calm fears for her health after it emerged had tested positive for .

The image shows the Queen, 93, holding the 1970s-style cream corded telephone to her ear as she speaks to from her private sitting room at Windsor Castle.

The room is one of the places where Her Majesty spends most time while at the royal residence and is normally closed off from public view.

It has only been captured on camera a handful of times in recent years, most notably by Annie Leibovitz when she photographed the Queen and Prince Philip, 98, on the three-seater settee for a 2016 edition of Vanity Fair.

So this new photo offers a rare glimpse at the monarch’s private quarters – and the historical objects, trinkets and personal mementos that she chooses to keep close at hand. 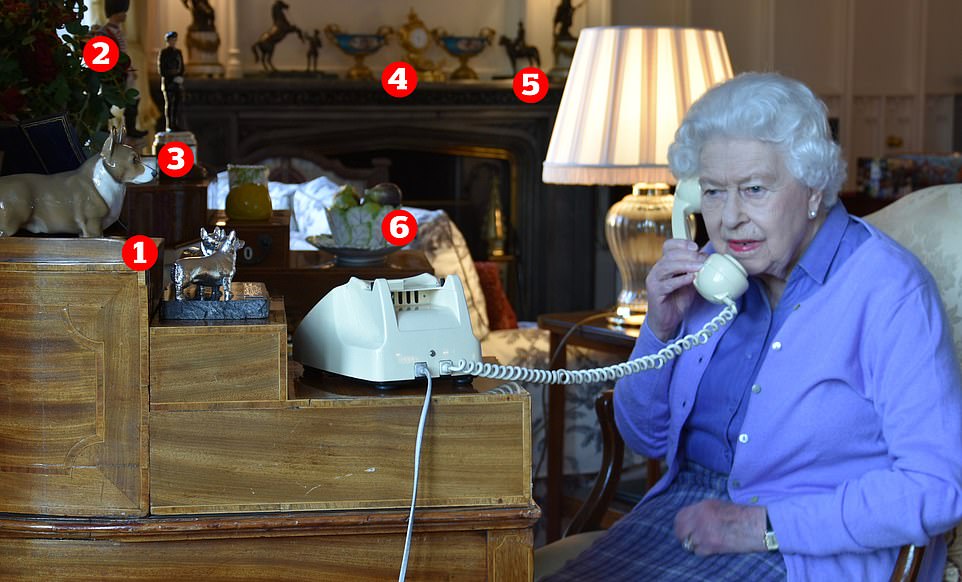 A glimpse inside the Queen’s private world: 1. Corgi figurines: one made from china and two silver on a slate base; 2. A Queen’s Guard statuette, keeping watch as she works; 3. A smaller military figurine; 4. A gold mantle clock; 5. Equestrian statuette of Princess Elizabeth of York signed and dated 1937; 6. Antique Wedgwood cabbage plate in rare white and green

The Queen’s love of her corgis is well-documented and this photo shows how she likes to be reminded of them while working at her writing desk. On the left-hand side of the desk there are three corgis: one larger one, thought to be china, and two smaller ones, thought to be silver, that are stood on a slate block. There is a silver plaque attached to the base of the block, suggesting it might have been given to the Queen as a gift.

On the top right of the desk there stands a statuette of a member of the Queen’s Guard, complete with his dress uniform of a red tunic and bearskin hat. The story behind the figurine is not known, however it is thought to be a favourite of the monarch as it has been stood in the same spot on her desk – keeping watch as she works – for at least five years.

Standing next to the Queen’s Guard statuette is a smaller uniformed soldier. This one is placed on what appears to be a base with a plaque, as if it was presented to the Queen as a token as award. Again, little is known about the specifics of the figurine but it too has been kept in place for the last five years.

The Queen has a vast collection of clocks, with more than 800 documented in the Royal Collection and more than 70 alone housed in Windsor Castle. This ornate example is thought to be gold or gold plated and features Roman numerals on the face.

5. Equestrian statuette of Princess Elizabeth of York signed and dated 1937

Alongside corgis, the other great love of the Queen’s life is her horses, which she commemorates with two statuettes on her mantle. The first, seen on the left-hand side of the image, shows a groom using a reign to bring a horse under control as it rears up on its hind legs. The second, seen on the right of the image, has a more personal meaning. For it depicts the then Princess Elizabeth on horseback, circa. 1937.

The Queen and the Royal Family are known for exchanging quirky presents at Christmas – and this unusual set would certainly fit the bill. It is believed to be a rare Wedgwood bowl and plate, or cup and saucer, designed in the shape of a cabbage leaf with a scalloped edge. Similar designs in a darker green shade can be found online but what sets this apart is its rare green and white colouring.