A ‘Draft Andrew Cuomo’ for president movement popped up this week as the New York governor has become ‘s favorite foil amid the crisis.

Two Draft Cuomo Twitter accounts were launched since Monday, while praise of Cuomo has lit up the left-leaning Twittersphere every time he briefs the press.

At the same time, likely Democratic nominee just got his Wilmington, Delaware house wired for home broadcasting, so he’s able to spend more time in the limelight, something that kept him sidelined until Monday. 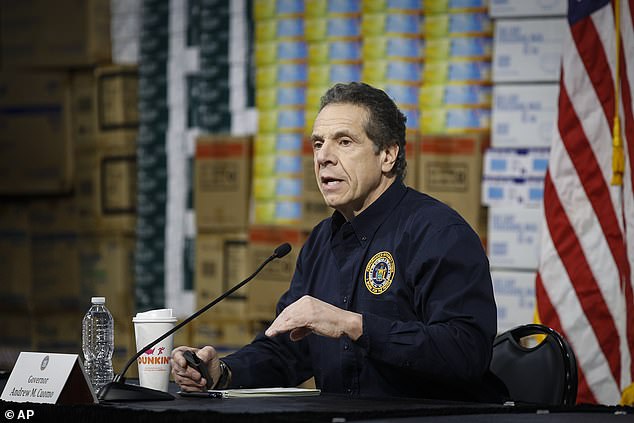 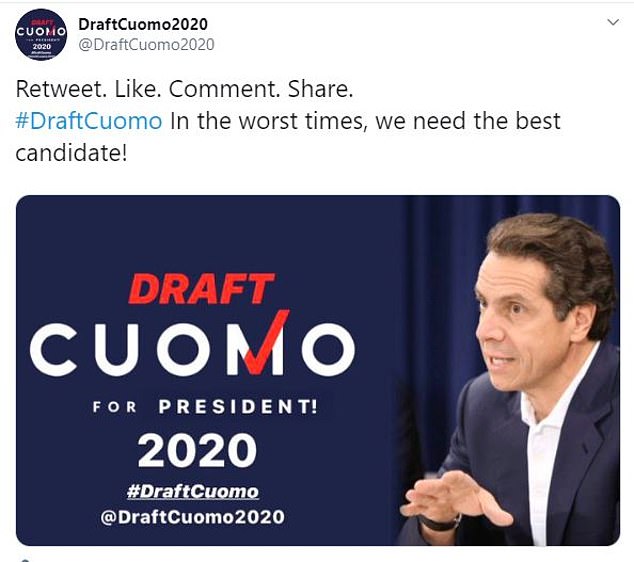 On Tuesday, the account @DraftCuomo2020 appeared, which was created by a man named Jay out of New Jersey, who likes the governor as a back-up Democratic candidate for president

The @DraftCuomo2020 account started with this tweet on Tuesday. The founder said he planned to amass followers on social media to start, with no plans to raise funds for a potential Cuomo run through a political action committee

Jay, a Democrat from New Jersey, who declined to have his last name used for the story, launched  on Twitter on Tuesday. Another  account was created Monday, but has fewer followers thus far.

‘I think what this moment shows the electorate, more than anything, is the importance of things we might not have considered initially, most especially – executive experience,’ Jay told DailyMail.com on Wednesday. ‘If you look at our field back when it started with 20-25 some odd candidates, there were a few governors in there and maybe in hindsight we should have given them a better look.’

But the coronavirus outbreak put those leadership skills front and center, and prompted Jay to act.

‘I’ve been getting messages from folks around the country saying how can I help, what can I do to get this done?’ Jay said. ‘The enthusiasm is definitely there – and I think it’s in large part due to reconsideration of our priorities given the circumstances.’

Jay envisioned Cuomo as a back-up candidate, pointing to the advanced ages of both Biden and Bernie Sanders, who remains in the Democratic 2020 race.

‘So given these circumstances and given where 2020 has already led us, we have to be prepared in the case that one or both of our nominees can’t serve and they fail – whether that’s because of their health or for other reasons,’ he said.

‘And in that case, I think Gov. Cuomo would be a great pick,’ he added.

He also argued that while Biden promised to pick a female running mate, the former vice president might want to rethink that choice and select Cuomo instead.

Jay said he has no plans for @DraftCuomo2020 besides a social media presense so far, explaining that people’s focus should be on the coronavirus pandemic. He also has no plans to look up convention rules or raise funds for Cuomo as part of a political action committee.

‘There needs to be a critical mass so to speak for this to even be a discussable topic,’ Jay said.

Other Democrats DailyMail.com interviewed understood why there was an interest in Cuomo.

Lindsey Boylan, a former Cuomo aide who’s running for Congress in the New York Democratic primary against Rep. Jerry Nadler, said the governor has ‘stepped forward and taken responsibility in a time when we have a real vacuum of leadership at the federal level.’

‘He’s making things happen, period end of story,’ Boylan said. ‘People are responding to his straight talk and bottom line kind of leadership in a moment like this.

‘The American people need leaders with the courage to tell the truth and that’s what Andrew Cuomo is doing,’ she added.

As a Congressional candidate, Boylan hasn’t made an official endorsement for president, but has said she’ll support the Democratic nominee.

She has, however, noticed Biden’s absence.

‘As I watch [President Trump] bungle the most basic humane support on stage and be a total jerk, I think of the leadership we need. If [Joe Biden] expects to be our nominee, I would expect him to be very present and vocal right now,’ she tweeted Sunday. ‘I don’t get it at all.’

On Monday Biden started to remedy that, by broadcasting from his home.

Joel Payne, a Democratic strategist who worked for Hillary Clinton’s 2016 campaign, suggested members of his party were still shopping for a candidate over jitters from what happened four years ago.

‘Also reflects how much the COVID outbreak has sidelined Biden,’ Payne added.