Children are staying at home amid coronavirus fears after their parents ignored Boris Johnson’s advice – as nearly 630,000 sign petition calling for government to ‘#closetheschools’.

As four in ten children were kept home by parents fearful of sending them to class.

It came as warned against big gatherings to curb the spread but still refused to shut schools. 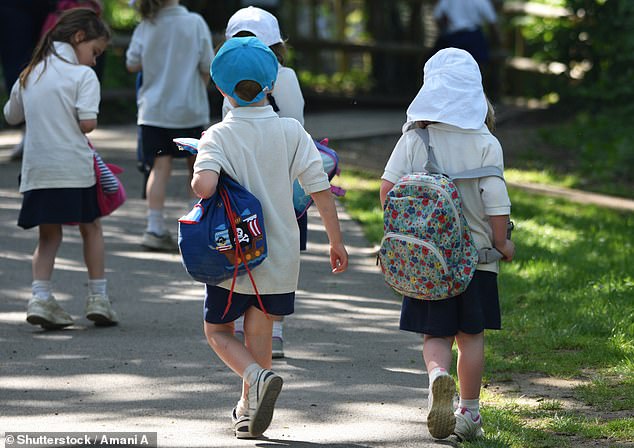 Teachers last night slammed the Government’s education measures, claiming they were inconsistent with other advice.

Katharine Birbalsingh, headmistress of Michaela Community School in Wembley, north-west London, said: ‘Non-essential contact for everyone except for teachers who should congregate with several hundred or even thousands daily?

‘I’m no virologist but how do I make sense of this to staff? Also, dozens/hundreds of parents are too scared to send kids in to school!’

Andrew O’Neill, head teacher of All Saints Catholic College in west London, said the situation was ‘unbelievable’, revealing 30 per cent of his pupils had not turned up and a quarter of his teachers were in self isolation.

He told the London Evening Standard: ‘The supply agencies don’t have people, and do you even want to bring in teachers who have been school-hopping and come into contact with many thousands of people for the last few weeks? It’s crazy.’ Chris Dyson, head teacher of Parklands Primary School in Leeds, said attendance was down to 74 per cent, while Dan Morrow, chief executive of the Woodland Academy Trust in Kent, said it was between 55 per cent and 80 per cent, the TES reported.

Public Health England guidance said school closures ‘may be necessary if there are so many staff being isolated the school has operational issues’.

But officials admitted a lack of fit teachers may trigger shutdowns anyway. 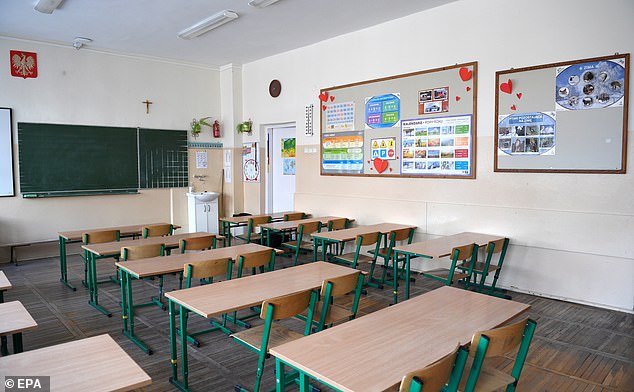 Classrooms are lying empty elsewhere in Europe, this primary school classroom in south-eastern Poland lies dormant after the Polish government ordered the closure of all schools and universities for two weeks

Mr Johnson said: ‘We think at the moment on balance it’s much better if we can keep schools open for all sorts of reasons, but I appreciate this is something we need to keep under review.’ The refusal to close schools is at variance with many other countries.

What is the current advice from the Government to stop the spread of coronavirus in schools?

Staff, young people and children should stay at home if they are unwell with a new, continuous cough or a high temperature to avoid spreading infection to others.

Otherwise they should attend education or work as normal.

If staff, young people or children become unwell on site with a new, continuous cough or a high temperature they should be sent home.

Supervise young children to ensure they wash their hands for 20 seconds more often than usual with soap and water or hand sanitiser and catch coughs and sneezes in tissues.

Posters and lesson plans on general hand hygiene can be found on the website.

Unless you have been directly advised to close by the local Public Health England Health Protection Team, we recommend all education settings remain open.

For any staff dealing with suspected cases of Covid-19, the guidance says they do not need to go home unless they develop symptoms themselves, but adds they should wash their hands thoroughly for 20 seconds afterwards.

Guidance states that, in most cases, school closures will not be needed – but this will be a local decision based on factors such as establishment size and risk of further spread.

If there is urgent public health action to take, the local Public Health England Health Protection Team will contact the school and undertake a risk assessment.

It says PHE will ‘rarely advise’ a school to close, but adds: ‘This may be necessary if there are so many staff being isolated that the school has operational issues.’

Sir Patrick said: ‘It may be necessary to think about things like school closures but they have to be done at the right time.

Downing Street insisted mums and dads would not face fines if they keep children off school due to coronavirus symptoms.

And Kevin Courtney, of the National Union of Teachers, said: ‘Are teachers being put at unnecessary risk? We need information and we’re not getting it from the Government.’

Last night school inspectorate Ofsted gave in to teachers’ demands to cease checks due to the crisis. And Education Secretary Gavin Williamson met school leaders amid uncertainty about GCSE and A-Level exams.

Many head teachers reported attendance figures of up to 100 per cent yesterday.

An online  demanding the Government close schools in the UK has so far received 590,000 signatures – with the number constantly rising.

Hamid Patel, the chief executive of Star Academies – which runs a string of outstanding state schools, told that exams should be postponed until next year.

He said: ‘Cancellation is the only sensible and humane option.

‘It will go a long way to ensure the success of the ”delay” phase of the government’s strategy. It could save tens of thousands of lives.’

In Anglesey in north Wales, Helen Wright was at home with her 10-year-old son and had asked his school to send her a home education pack.

‘I do not trust government guidelines or the government over their handling of the matter,’ she said.

One Twitter user wrote: ‘I am so disgusted with the incumbent UK government’s response.

‘I fortunately work within walking distance and currently occupy my own office, but students should absolutely be allowed to abstain from schools with no issues.’

Another said: ‘I have to strongly disagree with the government on this one. This is about public safety and the health of loved ones.

‘This is not something to be trifled with!’

While another wrote: ‘Boris isn’t going to close schools so take matters into your own hands to avoid spreading and receiving germs.’

In Doncaster, Suzana Ilieva has kept her six-year-old son at home since Friday, out of fear that he could transmit the virus to an elderly relative who lives with her family.

‘I think the government is irresponsible and for the sake of protecting the economy is damaging people’s lives,’ she said.

‘I made my own decision with my husband.’

Boris Johnson and Carrie Symonds prepare to go public, as we reveal they share passion for ambition
Prisons to bring in scanners to stop flow of Spice
The Queen brings a splash of colour in a vibrant yellow ensemble at church at Sandringham
Stansted Airport closes as passenger jet is evacuated
Elton John reveals HE paid for Prince Harry and Meghan Markle to fly to his mansion
Emmerdale's Asan N'jie threatened to KILL Jamie Lomas after throwing punches at TV Choice Awards
Smith still most common surname in English-speaking countries
How many of the 50 TV shows can YOU find?