Mike Pence’s coronavirus task force says that the government does not know the number of Americans who have been tested for the contagious disease because is no way to effectively track tests processed by private labs and hospitals.

The task force held a press conference on Monday night where officials addressed the spreading virus that has 684 reported cases and led to 26 deaths in the US.

United States Secretary of Health and Human Services Alex Azar revealed officials are actively trying to build technology to gather information from public and private health sectors to determine just how many Americans have been tested for the virus. 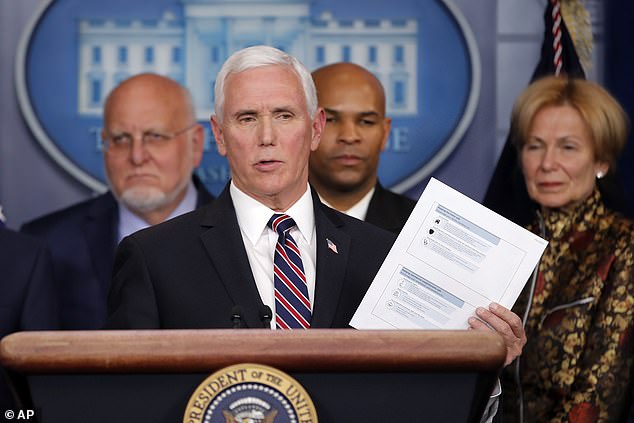 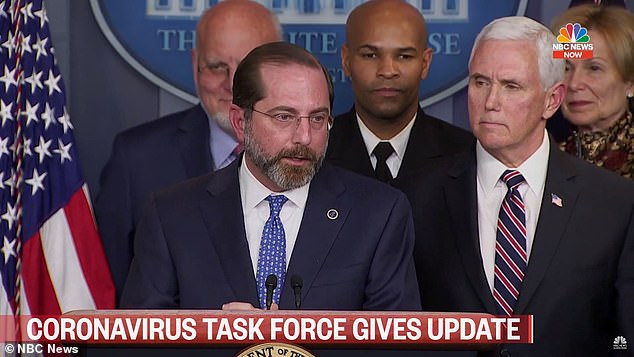 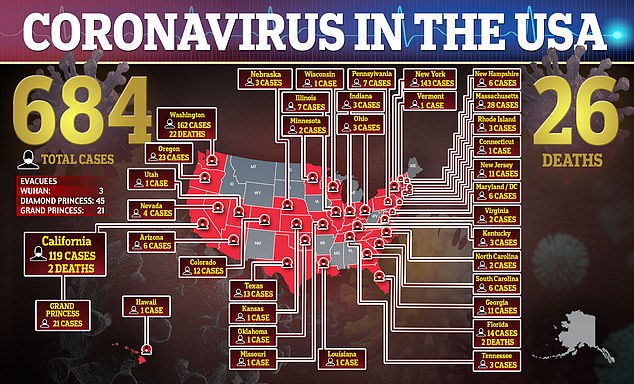 He explained that though thousands of tests have been issued, there’s a discrepancy in reporting the results.

‘There are different types of tests that get sent out. The test that the CDC is sending out, that’s enough to test 75,000 people that was sent out last week, those go to public health labs. There are about 80 labs in the United States, one in each state at least. Those report results back in to the CDC because they’re part of the public health network,’ he said.

‘The larger quantity of tests that shipped, about 900,000 of the tests that shipped by this weekend…and so many of the remainder of that total 2.1million tests – those go to hospitals, private labs, others for testing,’ Azar added.

He said those private hospitals and labs don’t have to report information to the CDC if they conducted a test or the results of the test.

‘We’re getting IT the system up through CDC. We want to give you accurate information as we go,’ he added.

In Monday’s press conference Pence said he has not tested for the virus and was not sure if the president had been tested either.

At the top of the conference, Pence said testing is now available at all state labs in every state in the country.

As the  continues to spread throughout the country, there is mounting concern over how many tests are available to the public and how people will get access to them to try to put a stop to the crisis. 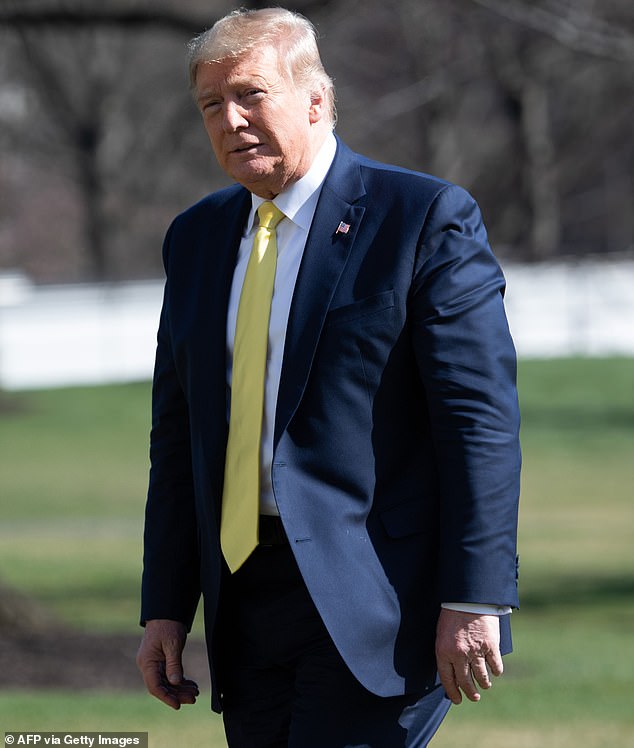 Donald Trump (pictured on Monday) has said that anyone could get a test if they wanted to. But the information coming from people on the ground and even in his own government contradicts that remark

vowed on Friday that the ‘beautiful’ tests would be readily available to anyone who wanted one – a direct contradiction to what CDC officials are saying, and what people who fear they actually have the virus are reporting.

Dr. Anthony Fauci, the White House’s ‘expert’ on tackling the virus, estimated that four million tests will be available by the end of this week.

Yet another conflicting number came from Dr. Nancy Messonnier, director of the US Centers for Disease Control and Prevention’s National Center for Immunization and Respiratory Diseases, who on Monday said that there were now enough for 75,000 people at state health labs.

It remains to be seen where those tests will go, how they will be divided up and who will get access to them.

In upstate New York, one of the worst hit regions in the US where dozens are now infected, people have reported going to the hospital with all the symptoms of the virus and asking for a test but being refused one.

Chris Gilch, a 36-year-old private chef who lives in White Plains, New York, and commutes into Manhattan for work said he went to the emergency room last week where he tested negative for the flu.

He asked for the COVID-19 test but, according to his mother Amy Bleach, was told he did not have it because he had not been to Wuhan, China- where it originated – and he did not have pneumonia.

He is now self-quarantining as a precaution.

‘There’s going to be a real outbreak… I think it’s totally irresponsible [for them not to test him],’ his mother, who is a registered nurse, told DailyMail.com on Monday.

She said he first felt inflammation in his ears then the illness ‘traveled’ to his chest.

15-minute coronavirus test being used in China, Italy and Japan – but NOT the UK or US because health officials haven’t approved it yet

A 15-minute coronavirus blood test is not being used in the UK, despite China, Italy and Japan diagnosing patients with it.

The test, which takes a blood droplet from a finger prick, allegedly shows the severity of coronavirus infection in a patient even if they don’t show symptoms.

Results are displayed in a similar fashion to those of an at-home pregnancy test within minutes and could potentially save delays in diagnosis.

Currently, swab tests used by Public Health England take 24 to 48 hours to be read by a specialist in a lab. In that time, suspected patients could be spreading germs to other people. 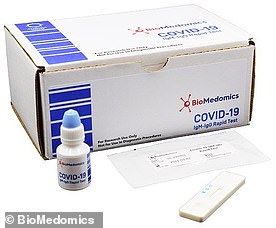 PHE confirmed they were not using the advanced blood test because it was not accurate enough, and are hoping to develop their own. The US Food and Drug Administration (FDA) is also yet to approve it.

A former PHE strategist said he was ‘not confident’ the test could produce correct results and is therefore unlikely to be rolled out. However, the method was desirable.

A small study by Biomedomics showed the test produced a correct response 80 per cent of the time.

On March 5, BioMedomics claimed its ‘quick and easy’ test was ready and being used in , , , China and some countries in the Middle East. 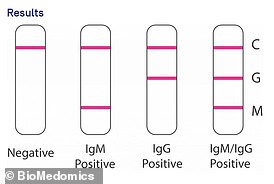 It can be read similarly to a pregnancy test, with one line for a negative test, two signifying it’s positive for either early or late antibodies, and three when the sample is positive for both

Others, who have confirmed cases of the virus like in the Life Care Center in Kirkland, Washington, where a handful of patients died from the virus, also haven’t been given tests to test their staff.

‘We still are not testing our employees inside, we don’t have test kits to do that. We would like to be able to test our employees,’ Tim Killain told Good Morning America on Monday.

One woman says she returned from South Korea with virus-like symptoms last weekend but was told by staff at George Washington hospital in Washington DC that despite their desire to test her, the Department of Health was not allowing them to.

Maggie McDow flew through Seoul on her way to Thailand for work on February 24. She then returned to the US via London, avoiding South Korea, in the first week of March.

Last Monday, upon returning to Dulles, she felt unwell.

Her condition worsened on Tuesday and she went to the hospital but claims no one took her seriously.

She was bounced around until Friday, when she went to the hospital again.

‘After several hours the doctor came back in and told me that she was very sorry but the department of health was refusing to run the test.

‘They said I wasn’t in South Korea long enough…the doctor told me she thought there was a high likelihood that I have it based on my travel history, symptoms, the colleague that is sick, and all other tests coming back negative.

‘But, without the test she couldn’t tell me for sure, and her hands were tied.

‘Do I have Covid-19? Who knows. Do we have a broken public healthcare system that is utterly failing during a health pandemic? Absolutely,’ she wrote in a Facebook post.

Public health labs in all 50 states now have the capacity for testing, meaning doctors people will no longer have to send samples to the CDC lab in Atlanta, Georgia, for results.

The CDC says it has now tested 1,500 people for the virus.

Currently, there are more than 600 positive cases and 26 people have died from it.

There has been widespread criticism over how slow the US has been to test people for it, and for the slow start to giving more health facilities access to the tests.

A 15-minute blood test that has been developed by a private US company is currently being used in China and Japan but not yet here.

It is unclear if that test, by BioMetrics, is one that will be rolled out by the government in coming weeks.

On Monday, the world’s markets took a tumble thanks to a ‘one-two punch’ of coronavirus and an oil price war between Saudi Arabia and Russia.

Billionaires are actually constructing vessels match for Arctic expeditions
Don Jr shares tweet smearing Wapo journalist feared dead as someone who supported Osama Bin Laden
Busy Philipps opens up about being date raped at the age of 14
Trump says it's 'interesting' his former fixer Cohen is using the lawyer of Crooked Hillary
Shell-shocked Mayor Emanuel demands to know why State's Attorney dropped Smollett charges
Trump 'is set upon an act of diplomatic vandalism'
Barack and Michelle Obama congratulate their own production company after American Factory Oscar win
Chris Wallace: Donald Trump and his family arrived at the debate venue too late for COVID-19 test