The former first minister of Scotland is on trial at the High Court in Edinburgh over accusations of sexual assault, including one of attempted rape.

The woman was first to give evidence and spoke about two alleged incidents, including one charge that the 65-year-old tried to rape her in June 2014.

The woman, known as Woman H, told the court today that she began to suffer flashbacks when the MeToo movement came to prominence in late 2017 after sex abuse allegations first emerged against Hollywood producer Harvey Weinstein.

She said: ‘I had started to learn about (the MeToo movement), yes. It was just around that time. 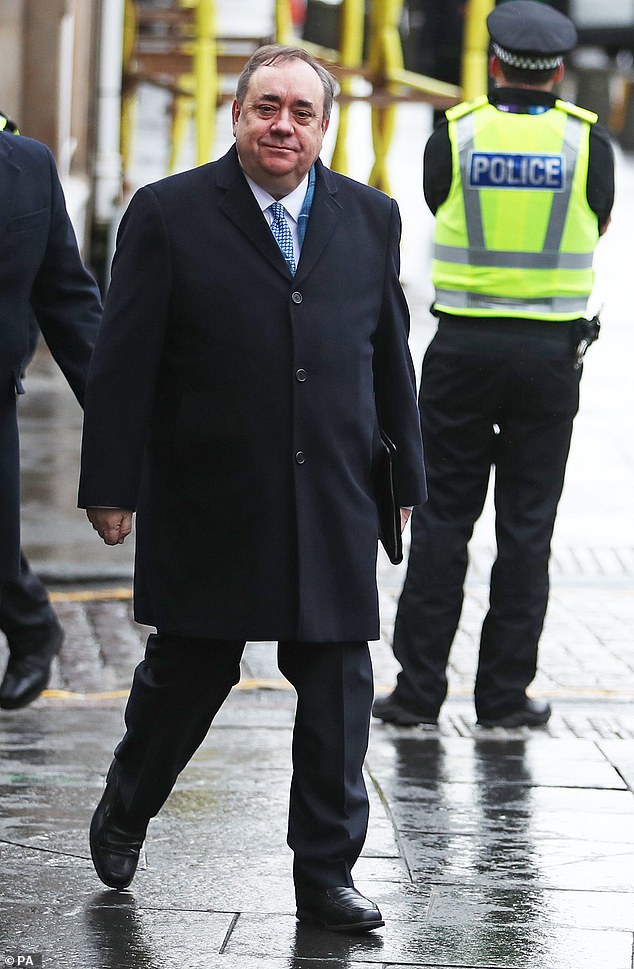 The 65-year-old (pictured arriving at court today) faces 14 charges of alleged offences against 10 women, all of which he denies

‘It was on the back of the Harvey Weinstein case.

‘These issues started to be discussed and I started to have what I could describe as flashbacks.

‘I started to come to the realisation at the October/November 2017 period.’

The woman said that no-one was ‘cheerleading’ her to give evidence but she had decided to speak to the police on her own.

When asked if she had been encouraged to speak to the police, she said: ‘There’s no-one cheerleading me to do this.

‘This isn’t fun, I would rather not be here.

‘I don’t feel like I have been encouraged, I feel I have made this decision on my own.’

The woman had previously told the court that she felt ‘hunted’ by Salmond moments before an alleged attempted rape in Bute House.

It is alleged the incident took place after a dinner at the first minister’s official residence.

She told the court on Monday that Salmond had been touching her legs and her shirt and trying to kiss her, then blocked her path when she tried to leave.

The court heard she agreed but on the condition they stayed in separate rooms, which she described as being ‘a bit of an escape plan’. 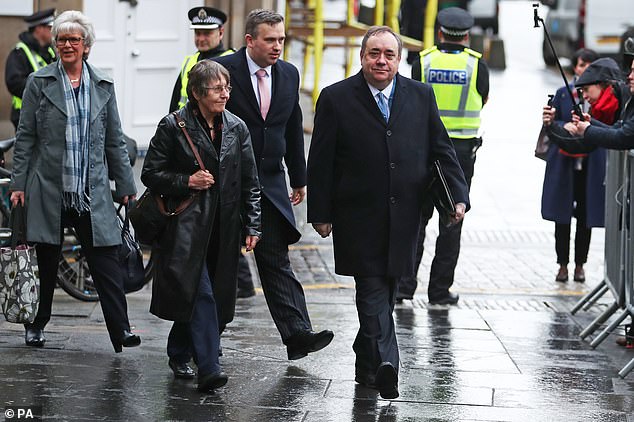 When she entered her room it was heard Salmond followed her in with a bottle of red wine, then ‘pounced’ on her, stripped himself naked, took her clothes off and pushed her on to the bed.

She added: ‘I felt like I was hunted. I remember feeling him on top of me. He was aroused, his private parts on top of me.’

The court was then told the complainer waited for Salmond to fall asleep before she went to the bathroom.

She told the court she did not give him any indication that she would welcome such contact.

The woman added: ‘Why would I want to go out with him? He’s a much older man who didn’t look after himself.’

Evidence was also given about an alleged sexual assault in Bute House beforehand in May 2014.

It was heard the same complainer had stayed behind to do work with Salmond when they began doing shots of a Chinese white spirit, which she described as an unusual incident.

The complainer described Salmond as being ‘half-cut’ and that he was in a ‘good mood’.

The court heard he sat on the floor and asked her to sit next to him.

She said: ‘He was putting his hand down my top and kissing my face and neck and touching my legs. He was laughing.’

It was heard she then managed to make her excuses and leave.

His lawyer Gordon Jackson QC lodged a special defence of alibi for the alleged incident in May 2014.

Consent was also given as a defence for three alleged sexual assaults and an alleged indecent assault against three women.

Judge Lady Dorrian earlier told the jury of nine women and six men they must be ‘impartial’ during the trial.

Salmond faces 14 charges of alleged offences against 10 women, all of which he has pleaded not guilty to.

The charges span a period between June 29 2008 and November 11 2014, with one sexual assault said to have taken place in the month of the Scottish independence referendum in September 2014.

Salmond – who was Scotland’s first minister from 2007 to 2014 – faces a number of other sexual assault charges, as well as two indecent assault charges.

His trial, which is expected to last for four weeks, continues.

World's Hottest Grandma Gina Stewart, 47, strips down to X-rated military ensemble
Kate Silverton tells how Strictly's punishing routines have helped her drop two sizes
Internet giant Amazon aiming to break music-streaming stranglehold held by Spotify
Corbyn calls for inquiry into the civil service to find out who leaked claims that he is 'too frail'
Boy put up for adoption when his mother refused to testify against his abusive father
Record for Australia's hottest day ever could fall for THIRD consecutive day
Arrests in Manchester, Peterborough and London for terror offences
Nick Faldo is to marry former topless dancer Lindsay De Marco and become her seventh husband