Vice President has responded to criticism that there are not enough test kits to adequately address the outbreak, saying that new kits will hit the market as soon as Monday.

‘The biggest news this week was that the president brought together the leaders of the top commercial laboratories in the country, huge businesses,’ Pence told Fox News host Jeanine Pirro.

‘And he said we need you to work together to put together the tests. And at the end of this week, two of the largest commercial laboratories in America said that they would have a test ready to go to market on Monday. That’s real leadership,’ Pence said.

The administration has come under criticism from governors and mayors who say that the Centers for Disease Control and Prevention was too slow in rolling out testing capabilities to the state and local level. 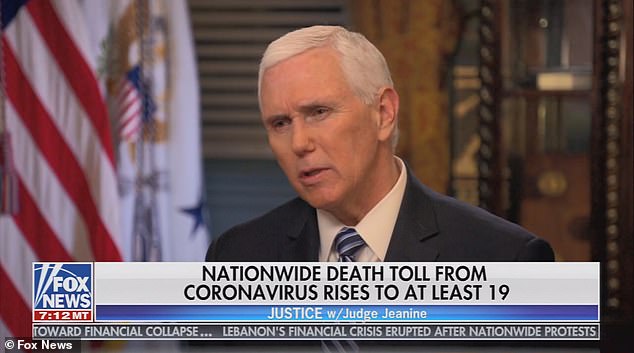 Vice President Mike Pence has responded to criticism that there are not enough test kits to address the coronavirus outbreak, saying that new kits will hit the market as soon as Monday 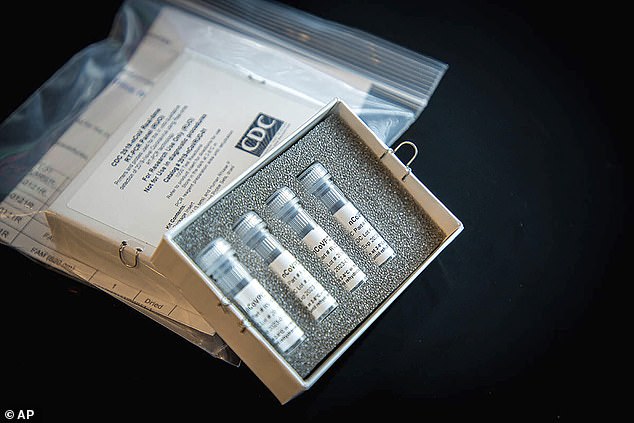 President Donald Trump brushed off concerns about the limited number of coronavirus test kits during a visit to the Centers for Disease Control in Atlanta on Friday and announced during a chaotic press conference that ‘anybody who wants a test can get a test.’

Pence insisted that the administration had focused on making tests available since the moment the outbreak hit the country.

‘And I want your viewers to know that as we’ve been ramping up the tests, since the coronavirus first really came ashore in the United States, that we’ve been focusing tests at the point of the need where states have requested them,’ Pence said.

‘State labs said they needed them, and particularly in the Seattle area and in parts of California that have seen multiple coronavirus cases and tragically, families that have seen the loss of life,’ he said.

Pence said that the test kits would be cotton swabs that have to be sent for analysis, with results taking four to six hours.

Meanwhile, US officials have so far declined to use the 15 minute blood test for coronavirus that a South Carolina company, BioMedomics, claims to is already helping Japan, China and Italy catch and isolate cases faster.

It’s not clear why the test is unable to move forward, but comes amid widespread frustrations over the limited availability of slow tests for the virus sweeping the nation. 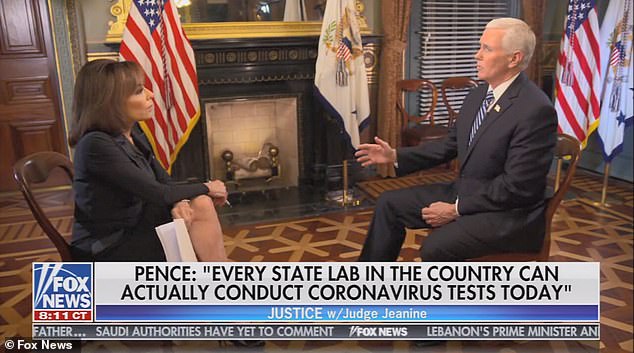 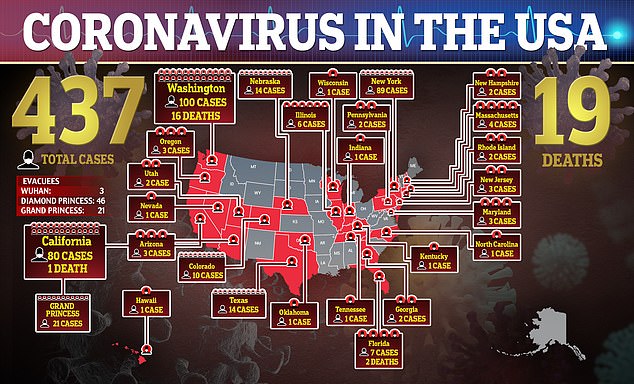 Pence went on to say that most Americans have nothing to fear from the outbreak.

‘The good news is that the risk to the average American of contracting the coronavirus remains low,’ Pence said.

‘And even for those who contract the virus, the vast majority other than a small few percent of the top will go through flu-like symptoms. In some cases, serious. But they’ll recover.’

He did stress that older people and those with serious underlying health conditions are at greater risk, and should consider taking precautions.

The World Health Organization estimates that the overall mortality rate of coronavirus is 3.4 percent.

Last flu season, influenza had an estimated mortality rate of 0.14 percent, according to data from the CDC.

Urban farmer falsely accused him of pedophilia and gun violence by three white women
Fasting may protect against breast cancer
Bronx surgeon is accused of sexually harassing two female residents
America's favorite fast food chain is Chick-fil-A once again
Flying ax misses a man's head by inches after it rebounds from the target in heart-stopping video
Can taking probiotics mean you stay ill for longer?
Adele's body transformation is down to '90 percent dieting' NOT exercise
Pete Buttigieg campaign charges there were 'material irregularities' in Nevada caucus counts