A student at Oxford University has tested positive for the after returning from overseas travel.

Public Health England confirmed the case to the university yesterday and the Vice-Chancellor informed staff in an internal email seen by the MailOnline.

In the email Professor Louise Richardson claimed she was ‘constrained as to what she could say’ but was ‘glad to report’ that the student self-isolated as soon as they developed symptoms and did not attend university or college events after they fell ill.

So far in the UK there have been 209 confirmed cases of the disease and two deaths.

On the university’s website, it states that the risk to other staff and students is ‘very low and that university and college activities can continue as normal’. 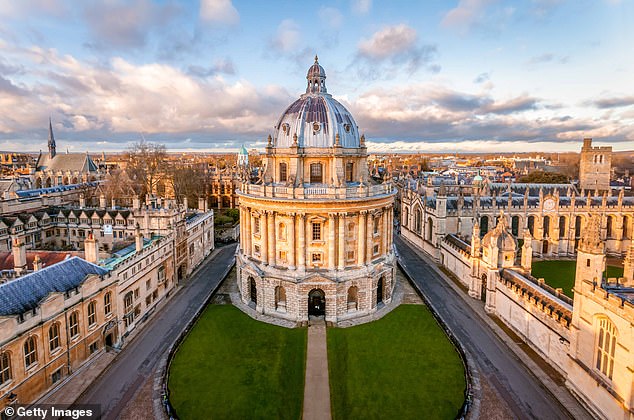 A general view of Oxford University above. The Radcliffe Camera, above, serves as a reading room

The university did not reveal what country the student had travelled from but said its immediate concerns were for the affected student and their family, along with the health and wellbeing of university staff, students and visitors.

‘It has been established that the affected student did not attend any university or college events after they felt ill, when they subsequently self-isolated. 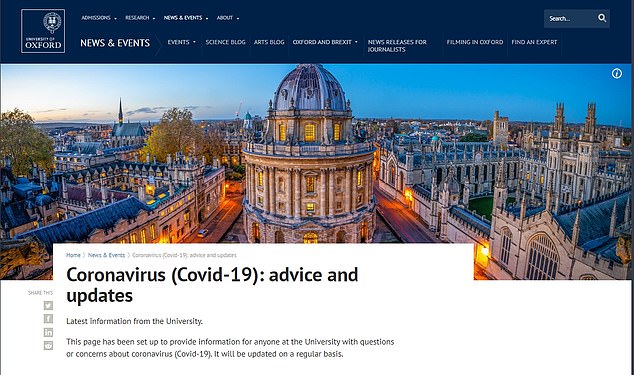 ‘We have worked with PHE to make sure that anyone who was in contact with the student after they fell ill have been notified and that they are able to access support and information as needed. PHE do not consider individuals infectious until they develop symptoms.’

It added that the university is taking the situation ‘very seriously’ and said support would be available for those with any concerns, adding that they would share any further updates of the infection as appropriate.

In an internal note seen by MailOnline Vice-Chancellor Richardson added that the university had been advised that it does not need to take any additional public health actions in light of the case.

‘We have anticipated this eventuality and have been preparing for it for some weeks now. Moreover, given the rate of infection across the country, there will in all likelihood be other cases’.

The Department of Health confirmed that cases of the virus in mainland Britain rose by 42 early on Saturday, before officials in Northern Ireland revealed another three cases on Saturday evening.

Overall, there are 184 confirmed cases in England, 16 in Scotland, seven in Northern Ireland and two in Wales.

How rider of The Cliffsofmoher saved his beloved horse from suffering a painful death
Liverpool vs Fulham LIVE score – Premier League 2018/19
Memoirs of the Nuremberg Trial's 'voice of doom'
Trump to announce a national emergency to spend $8 billion building his wall
Want to save £480 a year on bills? Be brave and haggle to score discounts
Make-up artist reveals the transformations he gives brides in before and after photos
Vote Tory not Brexit Party in these seats... to save Brexit
Human body parts lay rotting next to abandoned medicines for a YEAR until being found by burglars