European stock markets including the FTSE 100 sank further this afternoon as traders feared that the crisis could plunge Britain into recession.

The falls follow a 110-point drop yesterday, which ended a three-day bounceback among UK equities as officials said Britain is edging towards a widescale outbreak.

It also comes a day after top investment bank Goldman Sachs warned that coronavirus could push the UK to the brink of recession in the coming months.

Shares on Wall Street in New York were set to slide again as well, with Dow futures down 2.1 per cent and those for the S&P 500 falling 2.4 per cent. 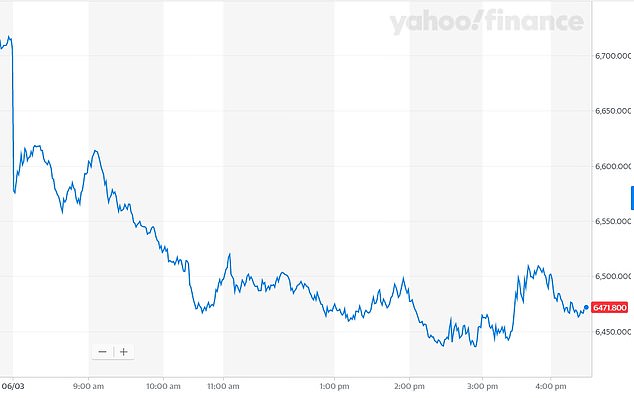 Meanwhile Milan’s major stock index the FTSE-Mib went down 3.1 per cent to 20,890 points as Italy continues to face the biggest outbreak in Europe so far.

The fall for the FTSE 100 erased the index’s gains from earlier this week, with export-heavy companies now having lost more than £175million in value since the epidemic sparked a worldwide rout last week.

Connor Campbell, financial analyst at Spreadex, said: ‘With no signs of the outbreak slowing down… investors remain gripped with a near unshakeable panic, the week’s various central bank rate cuts only serving to reinforce the seriousness of the situation.’

THIS WEEK: The FTSE fell again this afternoon, wiping out the gains it had seen so far this week

Russ Mould, investment director at AJ Bell, added that investors are fretting about the possibility of a global recession caused by coronavirus.

He said: ‘Non-stop news headlines about the spread of coronavirus has caused investors to be very concerned about a global recession.

‘This tension is likely to remain front and centre until we get some evidence that the virus can be contained.’

Hotel and travel stocks were once again among the worst hit in the latest leg of the coronavirus sell-off, with Holiday Inn owner InterContinental Hotels and Premier Inn group Whitbread both down 6 per cent on London’s FTSE 100.

PAST FORTNIGHT: The FTSE has plunged since the virus sparked a worldwide rout last week

Tour operator Tui was 5 per cent lower, with cruise ship giant Carnival tumbling 6% as demand for bookings slumps amid a wave of cancellations from worried holidaymakers.

Carnival’s woes were compounded by news of another cruise liner, the Grand Princess, being stranded off San Francisco.

Airlines have also been badly impacted, with the collapse of Flybe raising fears that other vulnerable players may go bust in the fallout from coronavirus. 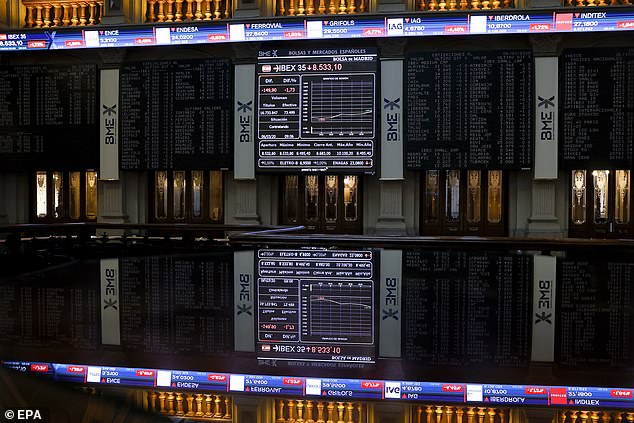 Blue chip oil giants BP and Royal Dutch Shell were also suffering share losses – falling nearly 4 per cent each – as the cost of crude extended recent declines, with Brent down another 4 per cent at just under $48 a barrel.

Officials in Britain said a woman in her 70s with underlying health problems had succumbed to the virus yesterday, while the number of infections jumped to 163.

Markets have endured roller coaster ups and downs for weeks amid uncertainty over how much damage the outbreak of the virus will do to the global economy.

‘At this point no one can really explain why the markets behave the way they do, and what may be next. The only thing we can say is this high volatility is bad,’ said Ipek Ozkardeskaya, a senior analyst at Swissquote Bank. 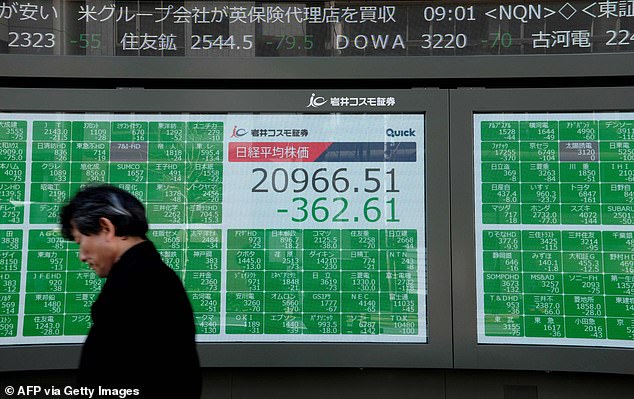 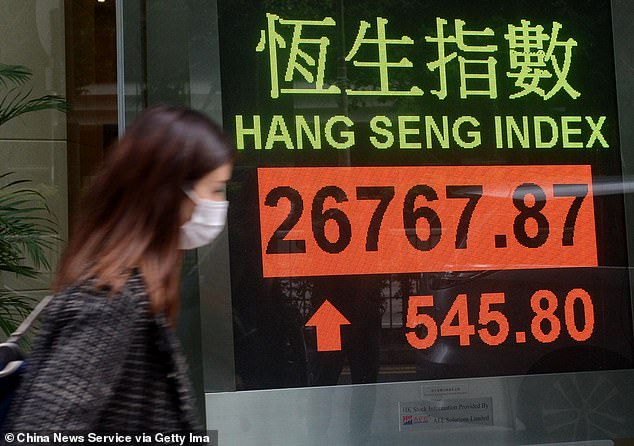 ‘Bulk holiday cancellations and a significant drop in all-purpose travels added to anxiety of disrupted supply chains and rumours that China may be lying about the resumption of activity explain why the issue goes beyond governments’ and central bankers’ control this time.’

Analysts at Top investment bank Goldman Sachs have warned coronavirus could push the UK to the brink of recession in the coming months.

They say the outbreak will cause a ‘substantial’ near-term hit to economic growth, decimating the tourism industry and slashing leisure spending as Britons stay indoors. 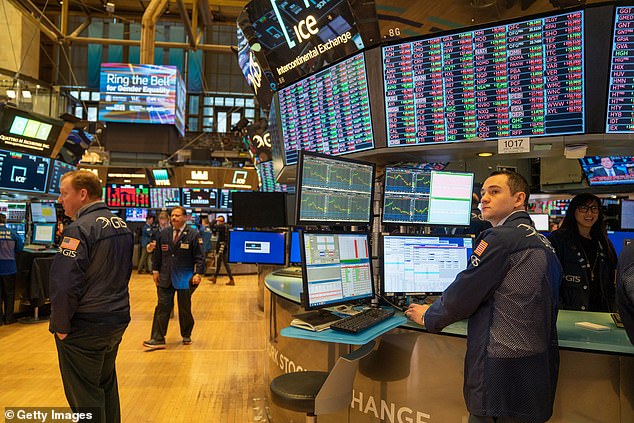 It will cause a headache for new Chancellor Rishi Sunak, who is due to present his first Budget next week.

But analyst Sven Jari Stehn said: ‘The Budget may now focus more on measures to safeguard public health than a broad-based expansion of spending.’

Goldman Sachs expects the economy to be flat in the first three months of 2020 and to contract by 0.2 per cent between April and June.

Gigi Hadid dons a cozy fleece and low-waisted trousers that expose her trim tummy while out in NYC
Venezuelan soldiers fire tear gas at desperate people trying to flee across the border to Colombia
When the answer to insomnia is to be woken up every 3 minute
Number of homes 'earning' more than owners falls, says Halifax
Trump UK visit: President's entourage spotted shutting down petrol station
Lorraine Kelly hits back at Esther McVey in 'feud' over their GMTV days
It's an army chair! Craftsman turns military uniforms into furniture upholstery
SNP MP Margaret Ferrier faces demands to QUIT over flouting quarantine