Victoria Police have not yet said whether they will lay charges against a pair of shopkeepers who fought back against a gunman who tried to rob them.

Police said they are still investigating the circumstances around the attempted robbery in Melbourne’s northern suburb of Hadfield on Sunday night.

Store owner Jackie Chen and his son Jason said they were lucky to be alive after a gunman’s firearm allegedly went off as they fought to stop their store being robbed.

The moment they fought back against a group of robbers armed with a gun and what appears to be a taser was caught in terrifying camera footage.

Four armed thugs allegedly stormed the supermarket on North Street shortly before 9pm on Sunday, according to reports and video of the incident.

One of the men, allegedly armed with a gun, demanded money, but the shopkeepers refused.

The man with the gun shouted ‘Sit down, don’t move. You move, I kill you,’ Jackie Chen told Nine News. 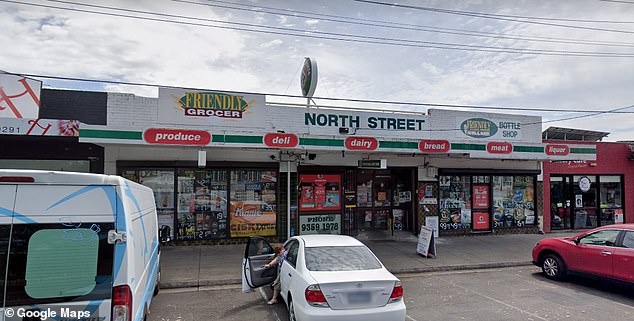 The North Street supermarket in Hadfield, Melbourne, where the attack occurred on Sunday

His son Jason, 30, joined the struggle to subdue the attacker when he saw him point a gun at his father’s head.

The gun allegedly went off in the melee.

Jason told Nine News the bullet nearly hit him in the head.

The Chens subdued the attacker as three accomplices fled in a vehicle.

Video footage of the citizens’ arrest shows the man detained on the ground, where he remained until police arrived to arrest him.

As the alleged attacker cowered on the ground, video footage showed him being struck several times with a pole. 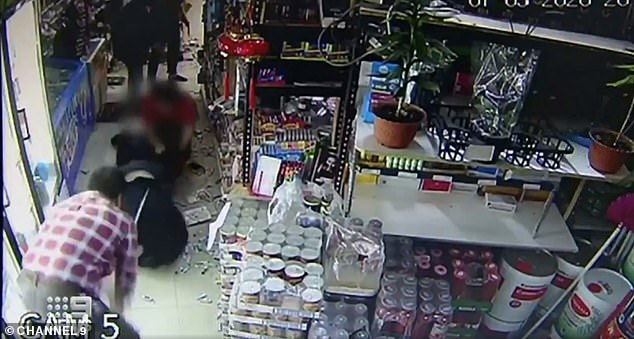 The alleged attacker, believed to be aged in his 20s, was taken to Royal Melbourne Hospital with minor upper body injuries.

Jason Chen also went to hospital for stitches to a cut on his arm.

A neighbour who lives near the supermarket and who witnessed the aftermath of the attack said the store owners were good people and well respected.

The dramatic footage has prompted discussion over what reasonable limit of force can be used to subdue an attacker.

The Chens told Nine News they were defending their livelihood and their family, including two young children who were in the back of the store at the time of the attack.

Audio of the incident reveals the alleged attacker whimpering that he is dying as he is detained on the ground.

Leading silk and Victoria’s former chief magistrate Nick Papas QC said people are entitled to take reasonable steps to protect themselves from an armed attacker – but there were limits.

‘We can’t talk about this case because we don’t know necessarily – but no charges yet,’ he told 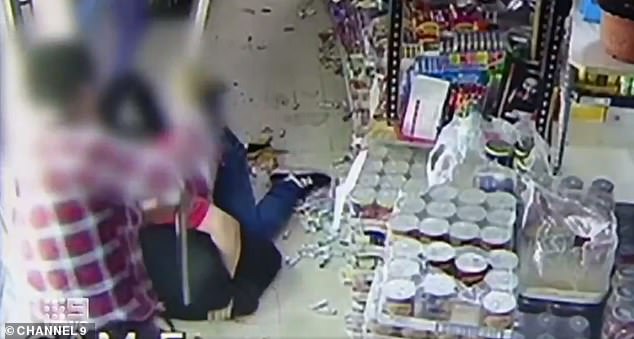 ‘Once you’ve restrained someone, even if they had a gun, even if they shot at you, there comes a point where you can’t keep restraining

‘You can’t go past restraint and protection of yourself to punishment and retribution, and that’s a line that needs to be drawn somewhere.’

Daily Mail Australia is not implying that the Chen family used unreasonable force in any way, only that the incident has raised the issue in community discussion.

Victoria Police told Daily Mail Australia on Tuesday that nobody has yet been charged over the incident.

Police have asked for anyone with information or who witnessed the incident to call them at Crime Stoppers on 1800 333 000.

Turkish persons are smashing iPhones and dumping Coca-Cola to protest Trump and boycott America
Fans mock Idris Elba doll for looking nothing like Hollywood star (despite being priced at £850)
Powerball jackpot soars to $550million making it the biggest jackpot of the year
Daughter of American beauty queen who has been missing for a year in Australia demand justice
How to cook your festive feast in 30 minutes flat
Kathy Griffin, 59, marries Randy Bick, 41, in surprise ceremony
Donald Trump claims social media has anti-conservative bias
New Jersey family of three drowned 'after both adults jumped in to help the struggling youngster'