Traders are warning that the ‘worst is yet to come today’ after the New York stock exchange suffered its biggest ever drop and £152billion was wiped off FTSE shares.

While the markets in Shanghai and Hong Kong closed higher, Europe and New York saw a sea of red. London, Frankfurt and Paris all posted losses of more than three percent on the day.

Wall Street also took a beating, with major indices shedding more than four percent in what is shaping up to be the US market’s worst week since the 2008 financial crisis.

Oil prices plunged by more than four percent at one point before recovering somewhat, while the yen gained as traders turned to a traditional haven in times of economic turbulence.

‘There was more coronavirus carnage on the markets,’ Spreadex analyst Connor Campbell said.

This is ‘one of the worst weeks in recent memory and terrifyingly, it’s not over yet,’ he said. ‘Friday is a tricky proposition.’

TODAY: The S&P 500 has lost 2 percent of its value as of midday trading

TODAY: The FTSE 100 lost over 3 percent of its value, shedding £62billion

THIS WEEK: The S&P 500 is down 10 percent from last week’s record high 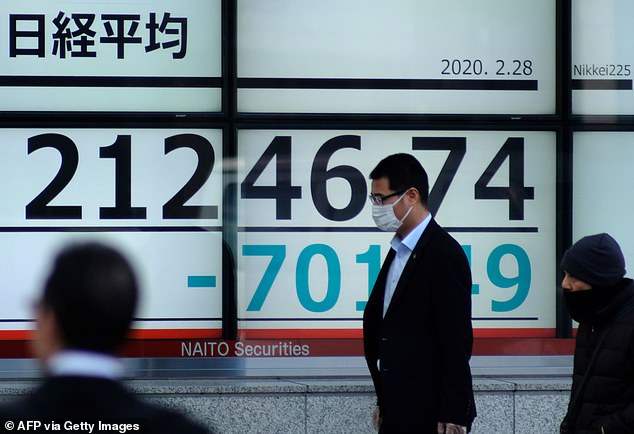 The benchmark index has now dropped 8 percent in four days amid concerns over more turmoil, with traders warning the virus could lead to ‘anaemic global growth’.

The yield on the 10-year Treasury fell further into record low territory, to 1.28 percent from 1.31 percent late Wednesday.

The market’s sharp drop this week partly reflects increasing fears among many economists that the U.S. and global economies could take a bigger hit from the coronavirus than they previously thought.

Earlier assumptions that the impact would largely be contained in China and would temporarily disrupt manufacturing supply chains have been overtaken by concerns that as the virus spreads, more people in numerous countries will stay home, either voluntarily or under quarantine. Vacations could be canceled, restaurant meals skipped, and fewer shopping trips taken. 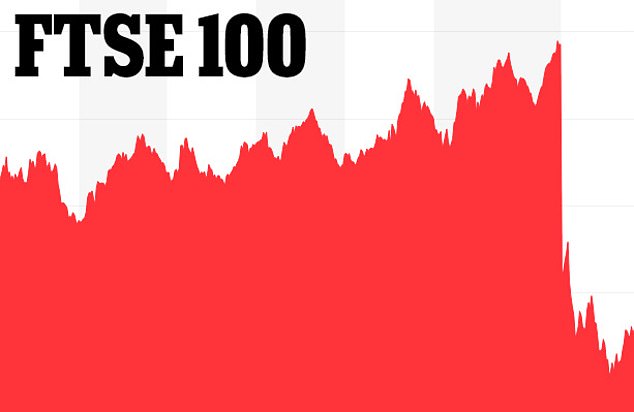 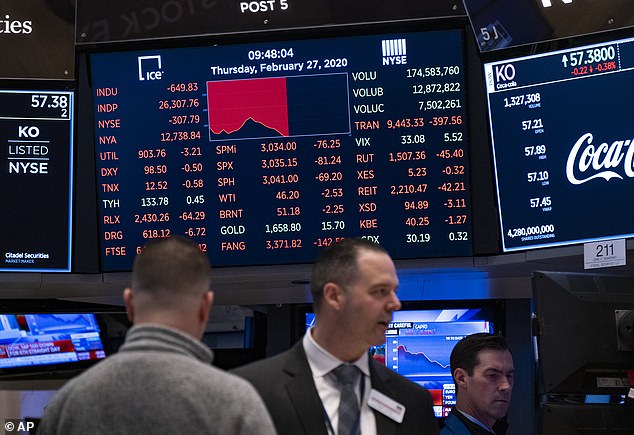 The Dow shed nearly 1,200 points, or 4.4 percent, taking its losses for the week to more than 11 percent (stock image)

‘A global recession is likely if COVID-19 becomes a pandemic, and the odds of that are uncomfortably high and rising with infections surging in Italy and Korea,’ said Mark Zandi, chief economist at Moody’s Analytics.

‘This is a market that’s being driven completely by fear,’ said Elaine Stokes, portfolio manager at Loomis Sayles, with market movements following the classic characteristics of a fear trade: stocks are down, commodities are down and bonds are up.

Stokes said the swoon reminded her of the market’s reaction following the September 11, 2001 terrorist attacks.

The winners and losers from today’s panic

Microsoft and Budweiser maker InBev became the latest to warn investors about the virus’ potential hit to their finances. Japan’s stock markets closed down 2.1 percent.

IG trading group analyst Joshua Mahony said ‘what was a centralised focus on Italian containment efforts has now turned into a European-wide crisis as new cases pop up throughout the continent’.

President Emmanuel Macron said France was preparing for a surge in the number of cases, adding: ‘We are facing a crisis, an epidemic.’

Airlines and holiday firms were among those worst hit, with shares in easyJet down 11 percent, BA owner IAG falling 10 percent and TUI dropping 9 percent.

Companies are reporting how the outbreak was hitting profits and trading, with Aston Martin warning that Chinese customers are falling.

Meanwhile, Asian-focused bank Standard Chartered warned the economy in the region was taking a hit and Microsoft said computer sales were suffering.

It comes after stocks appeared to recover in Europe yesterday following two days of heavy falls, with the FTSE 100 rising 0.35 per cent or 25 points to 7042.

Almost £100billion was wiped off the value of the FTSE 100 on Monday and Tuesday as the virus spread, with the blue-chip index hitting a 12-month low. 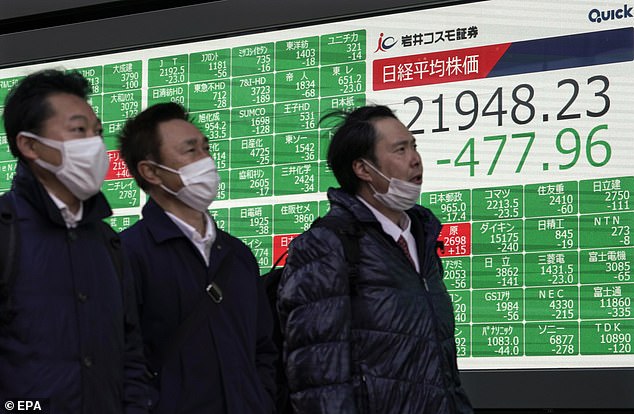 Some traders had expected stock markets needed a ‘correction’ because they had been trading at record levels in recent months.

But others were questioning whether this was more than a correction.

Ipek Ozkardeskaya, of Swissquote bank, said: ‘The slide we are seeing right now is not the correction of the recent stock rally, but the market’s understanding that the coronavirus outbreak would translate into significantly lower earnings and an anaemic global growth.

‘If we add the fact that the crisis has only started outside China into the mix, there is a meaningful shift in stock valuations.’ 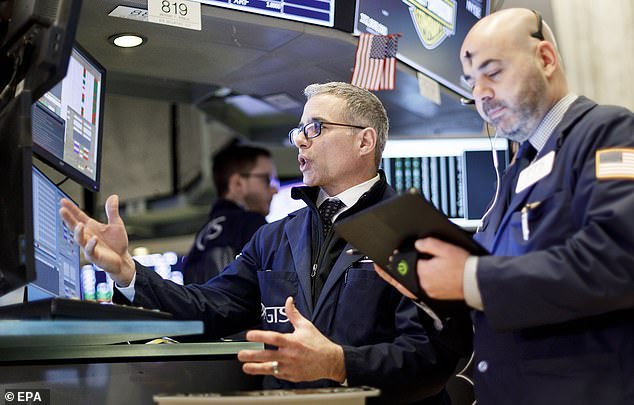 Two more people have tested positive for coronavirus in England, the Department of Health said.

The two patients have been transferred to specialist NHS infection centres after contracting the virus in Italy and Tenerife, according to England’s chief medical officer Professor Chris Whitty.

The new cases bring the total number of people diagnosed with Covid-19 in the United Kingdom to 15.

Italy has reported that the number of people infected in the country grew to 447 and 12 people have died.

And 168 Britons have been told to isolate themselves at the H10 Costa Adeje Palace in Tenerife.

Hopes were dashed yesterday when stock markets in the US rose in the morning, but as the day progressed they fell, with traders unimpressed with an intervention from President Trump.

Experts have warned savers to expect more turmoil, and urged them not to panic-sell. Emma Wall from Hargreaves Lansdown said: ‘Coronavirus is, and will continue, impacting markets.

‘That does not necessarily mean long-term investors should be overly concerned.

‘Timing the market is notoriously difficult, even professionals get it wrong.

‘Trading on news events can often lead to bad outcomes – panic selling often locks in losses, and jumping back into the market is hard to do.’

Rebecca McVittie of Fidelity International said ‘we should anticipate that this environment of heightened volatility continues.’

Coronavirus Q&A: What is the scale of the problem, what’s happening in the UK and is this a pandemic?

Coronavirus has spread from Wuhan in China to countries across the world, with more than 80,000 confirmed cases and nearly 3,000 deaths worldwide. Here is all you need to know today:

– What is the scale of the problem?

So far, China has reported a total of 78,497 cases, including 2,744 deaths. Outside China, there were 3,651, cases including 50 deaths. After Brazil confirmed Latin America’s first case on Wednesday, the virus has reached every continent except Antarctica.

– What’s happening in the UK?

There have been 15 confirmed cases in the UK so far following 7,132 people being tested. The latest two cases had the virus passed on in Italy where around 400 people have been infected with 12 deaths, and Tenerife where more than 160 Britons have been told to isolate themselves at a hotel where four guests tested positive. Eight of the confirmed UK cases have been discharged from hospital.

– What is the UK Government recommending people returning from infected regions do?

The UK Government said that people returning from Hubei province in China, Iran, lockdown areas in northern Italy, and special care zones in South Korea in the last 14 days should immediately self-isolate at home and call NHS 111. People returning from a number of other countries including the rest of China and Korea, Japan, Hong Kong and Singapore should self-isolate if they develop symptoms of cough or fever or shortness of breath. It also said that those returning from Vietnam, Cambodia, Laos, Myanmar and northern Italy above Pisa should self isolate if they show symptoms.

– What else is the Government doing to tackle the spread of the virus?

Health Secretary Matt Hancock has said the NHS is looking to extend home testing to expand the number of people that can be screened for the virus. Some flu patients will also be assessed for coronavirus, with officials hoping this will spot any spread and put preventative measures in place. Public Health England has put the new system in place in eight NHS hospitals across the country while around 100 primary care sites, such as GP surgeries, will also participate in the new scheme.

Although several schools have sent pupils home over fears of Covid-19 contact, including Prince George and Princess Charlotte’s primary school, Thomas’s Battersea, Public Health England’s general advice is for them not to close. Pupils at Burbage Primary School in Buxton, Derbyshire, were told the school would be closed on Thursday due to a ‘confirmed case of coronavirus amongst our parent population’.

– Is anyone benefiting from the outbreak?

– Is this a pandemic?

The World Health Organisation (WHO) no longer officially declares a pandemic, but says coronavirus remains an international emergency. Under the old system, a pandemic was declared when a new disease spread to several countries and showed sustained transmission between humans. Some experts say this is obviously happening with coronavirus. WHO has said it will start using the term pandemic in communications once it believes pandemic level is reached.

– What will happen if there is a pandemic?

Health leaders have said that if coronavirus becomes a global pandemic, then there were a number of contingency plans in place to halt its spread. England’s chief medical officer Professor Chris Whitty said that these include shutting schools, reducing public transport, and quarantining whole families. But he stressed the actions would depend on the scale of the outbreak and he was confident health services could cope with the current activity.

– What is a coronavirus?

Coronaviruses are a large family of viruses that cause illnesses ranging from the common cold to more severe diseases such as Severe Acute Respiratory Syndrome (Sars). The strain that has recently emerged is a new strain that has not been previously identified in humans. The respiratory disease it causes has been named Covid-19 by WHO.

– Where did it come from?

Coronaviruses are zoonotic, meaning they are transmitted between animals and people, the World Health Organisation says. The first cases identified were among people connected to the Huanan Seafood Wholesale Market in Wuhan in China.

The disease can spread from person to person through small droplets from the nose or mouth which are spread when a person with the virus coughs or exhales. These droplets land on objects and surfaces around the person and can be picked up other people touching them then touching their nose or mouth, it added.

– What are the symptoms?

Initial symptoms of the novel coronavirus include fever, cough, tightness of the chest, shortness of breath and breathing difficulties. More severe cases can cause pneumonia, severe acute respiratory syndrome, sepsis and septic shock which can lead to death. There are no specific treatments or vaccines for a new coronavirus but symptoms can be treated.

– Can only people with no symptoms spread the virus?

The jury is still out on this one, although scientists believe there is evidence of asymptomatic transmission. The Department of Health has said it believes the risk of catching coronavirus from someone with no symptoms at all is low. But because many people with Covid-19 experience only mild symptoms, particularly during the early stages of the disease, it is possible to catch it from someone who has mild symptoms.

– Are some groups more at risk?

The UK Government says that based on current evidence most cases appear to be mild and that those who have died in Wuhan appeared to have pre-existing health conditions. The World Health Organisation has said that about four in five people who contract the virus get mild symptoms and recover. But it added that older people or patients with pre-existing medical conditions such as high blood pressure, heart disease, or diabetes are more at risk of developing serious illness.