A car plowed into a daycare in a Philadelphia suburb while 17 preschoolers were asleep inside on Thursday, leaving four of the toddlers hospitalized, including one who suffered serious injuries, authorities said.

The crash at Children of America Educational Childcare in Upper South Hampton Township happened about 1:30 p.m.

A BMW, for reasons that have yet to be determined, came crashing through the front of the daycare, First Assistant Bucks County District Attorney Gregg Shore said at a press conference outside the horrific crash scene. 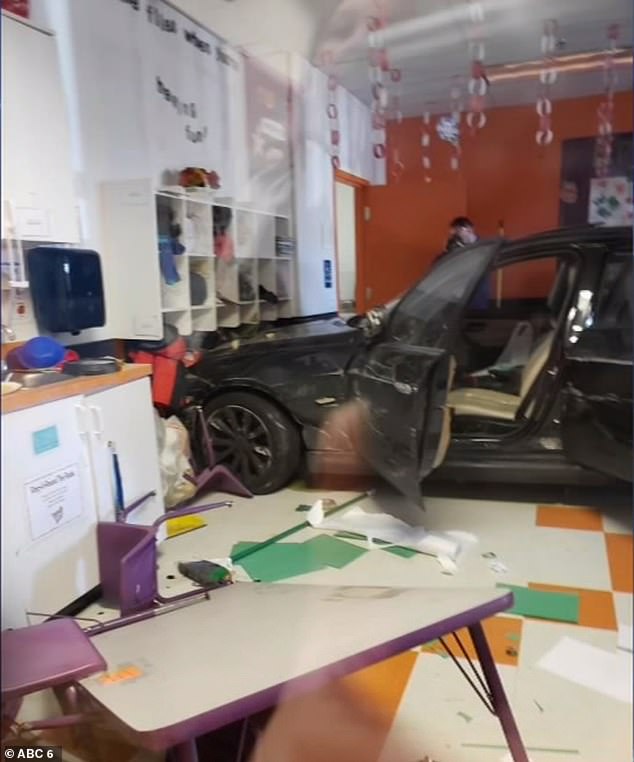 A car (pictured) crashed through the front of  Children of America Educational Childcare in Upper South Hampton Township, Pennsylvania, on Thursday and continued about 40 to 50 feet inside 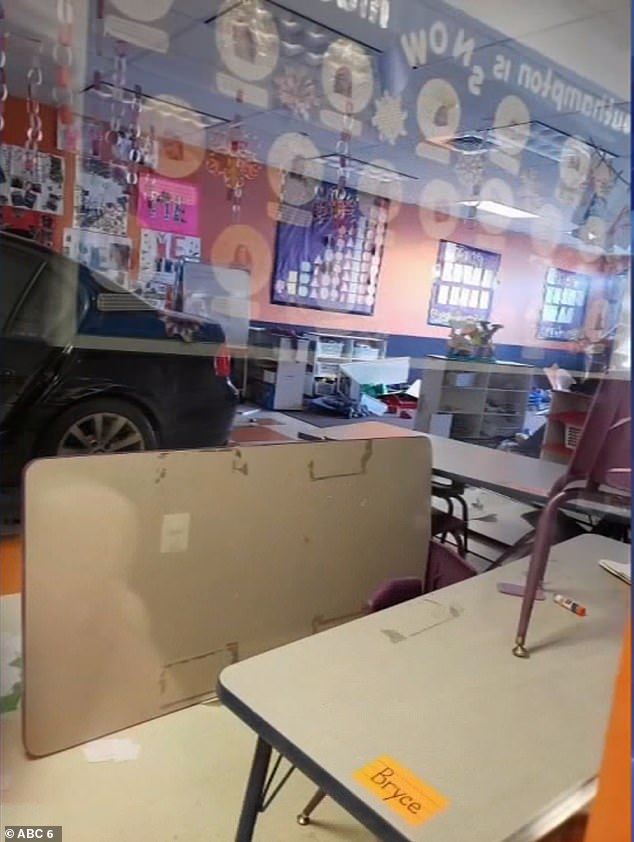 The rear of the car is seen in an image taken of the crash at Children of America Educational Childcare in Upper South Hampton Township, Pennsylvania 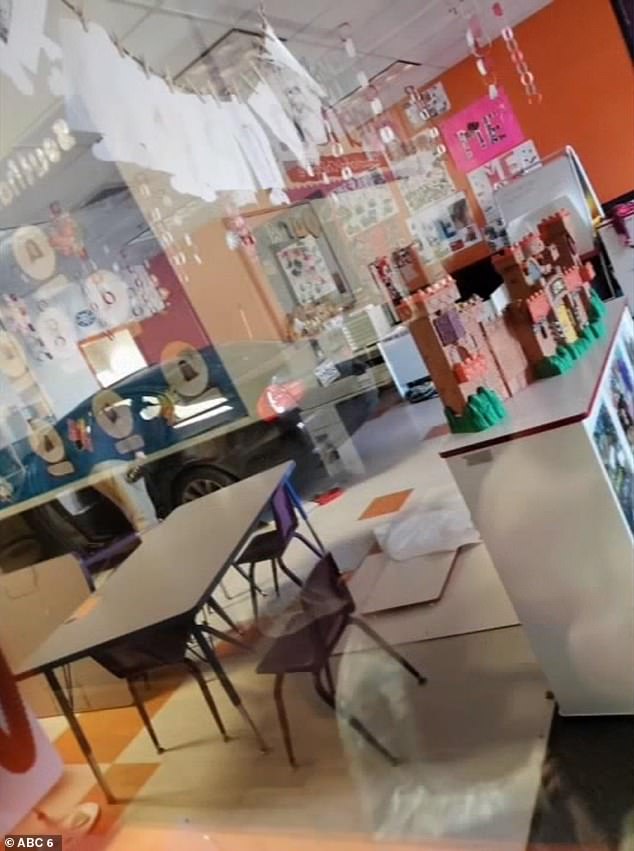 The vehicle (pictured) crashed into a room at the day care where 17 preschoolers were napping, say authorities.

The four door vehicle plowed 40 to 50 feet into a room where children ages 3 to 4 were napping, Shore said.

Images of the crash scene show kids’ play tables and tiny chairs overturned as a result of the impact, reports WPVI.

He did not detail how the injured toddlers were hurt.

The seriously injured child was transported to Children’s Hospital of Philadelphia, he said.

She was treated and released from an area hospital, Shore said. 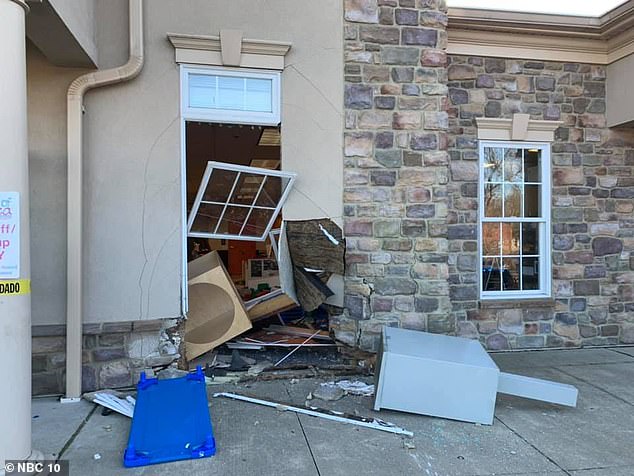 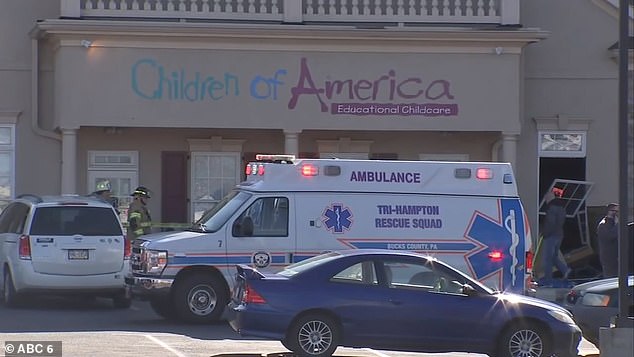 Authorities said four children were sent to a hospital after the vehicle crashed into Childre of America Educational Childcare in Upper Southhampton Township, Pennsylvania, on Thursday 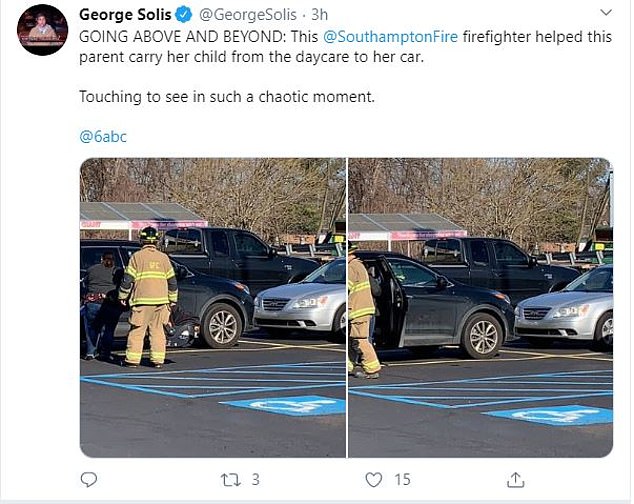 Shore, when asked whether the driver was impaired, said investigators were looking into the possibility, as well as other factors that may have caused the woman to send the vehicle into the day care.

Police overcame a language barrier with the woman, who is from Philadelphia, and found her to be cooperative as they determine how the crash came about, Shore said.

He said she was a ‘delivery driver,’ who had come to the day care in a ‘business capacity.’

Shore did not elaborate on what the driver was delivering.

Images of the crash scene show kids’ play tables and tiny chairs overturned as a result of the impact.

The vehicle had kept going into the building and stopped when it crashed into a cubbie hole shelf.

The shelf had been used for stowing children’s jackets and book bags.

Families of the children who were inside the daycare and were not hurt took to social media to express their relief.

‘So happy my daughter who slept in this room is okay with no injuries,’  Melissa Groninger wrote on the Upper South Hampton Police Department’s Facebook page, also offering prayers for the families of the injured kids.

Pamela Anderson, 51, looks effortlessly elegant in an ivory one-shoulder gown during PFW
William and Harry join their father as they attend premiere of Sir David Attenborough's new series
TALK OF THE TOWN: Fergie’s knockout medieval-style gown up for auction at a knockdown price
Tiger Woods is branded a 'pathological narcissist' in new biography
Teen school shooter Jesse Osborne gets life without parole for killing father and boy, six
Revellers in military uniform throw flour, eggs and firecrackers in 200-year-old battle in Spain
Father builds his son a miniature 6X6 Mercedes-Benz off-roader complete with roll cage
DR MICHAEL MOSLEY: How I beat my insomnia and how you can too