Mike Bloomberg’s campaign staff say ‘ ‘anti-capitalist’ rhetoric may have inspired an attack on their Knoxville field office, as the feud between the two Democratic contenders continues to escalate.

Bloomberg’s Tennessee headquarters was hit with graffiti on Thursday night, with vandals spray painting ‘F**k Bloomberg’, ‘oligarch’, and ‘classist authoritarian’ across the building.

Despite having no evidence as to the identity of the culprits, Bloomberg’s campaign manager, Kevin Sheekey, was quick to point the finger in a statement on Friday.

‘We don’t know who is responsible for this vandalism, but we do know it echoes language from the Sanders campaign and its supporters,’ Sheekey stated.

He added: ‘ We call on Bernie Sanders to immediately condemn these attacks and for his campaign to end the Trump-like rhetoric that is clearly encouraging his supporters to engage in behavior that has no place in our politics’.

A spokesperson for Sanders has not publicly responded.

Field offices for Bloomberg have also been targeted in Youngstown, Ohio and Flint, Michigan in recent days.

In Youngstown, posters which read ‘STOP AND FRISK’ and ‘EAT THE RICH’ were set up outside the building.

Billionaire Bloomberg and democratic socialist Sanders – who represent opposite wings of the Democratic party – are locked in an ugly feud, which has worsened since they lobbed insults at one another during Wednesday night’s Democratic Debate. 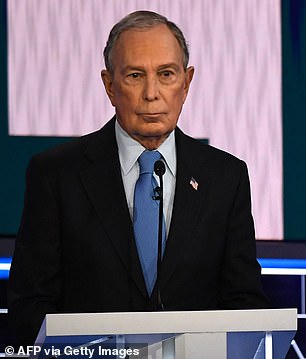 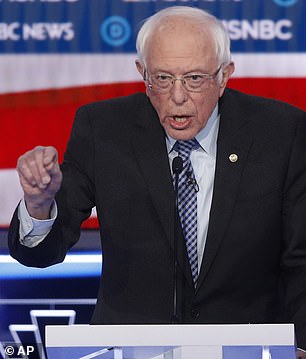 Mike Bloomberg’s campaign staff say Bernie Sanders’ ‘anti-capitalist’ rhetoric may have inspired an attack on their Knoxville field office, as the feud between the two Democratic contenders continues to escalate 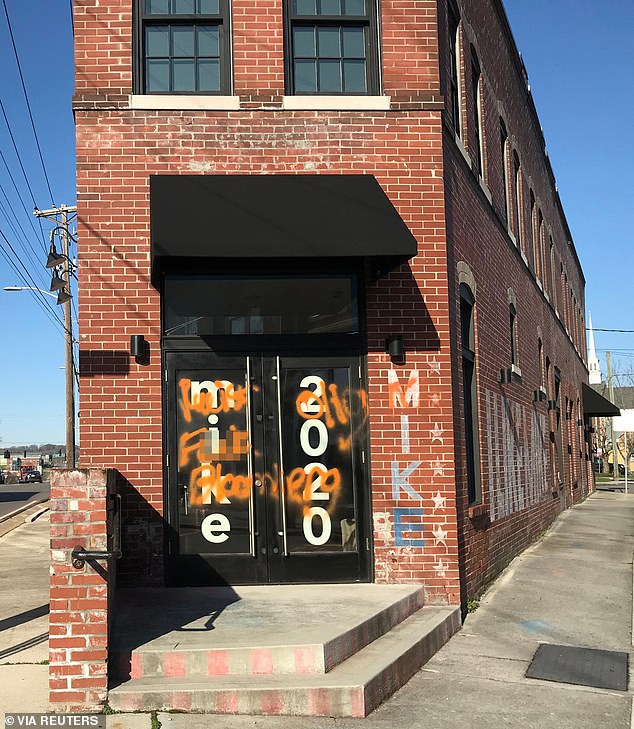 Bloomberg’s Tennessee headquarters was hit with graffiti on Thursday night, with vandals spray painting ‘F**k Bloomberg’, ‘oligarch’, and ‘classist authoritarian’ across the building 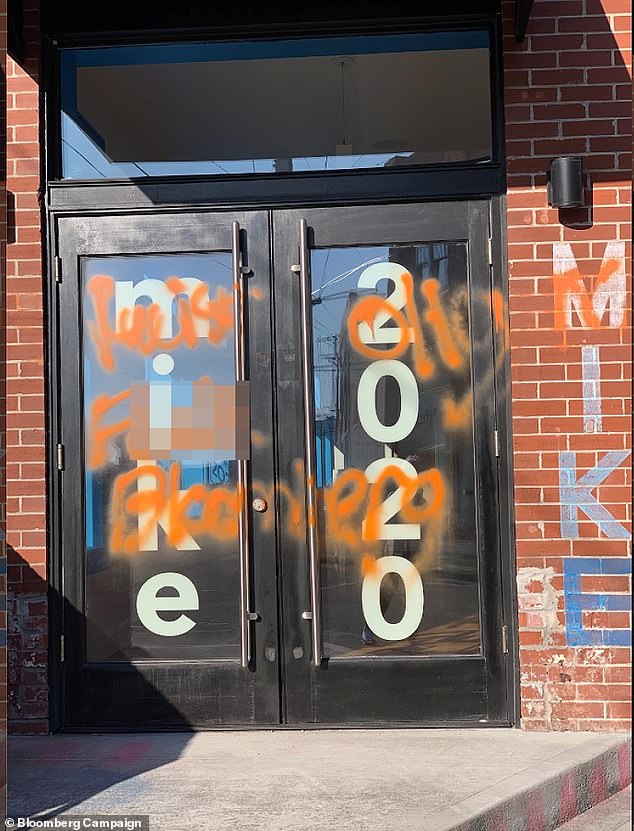 Bloomberg was savaged in Wednesday night’s debate, attacked by his rivals over his past comments about women and the controversial stop-and-frisk policy he championed whilst he was New York Mayor.

On Friday, Sanders sat down with Anderson Cooper for a 60 Minutes interview here he said Bloomberg’s debate performance was not good enough.

‘If that’s what happened in the Democratic debate, you know, I think it’s quite likely that Trump will chew him up and spit him out,’ he stated in a preview of the interview, set to air Sunday. 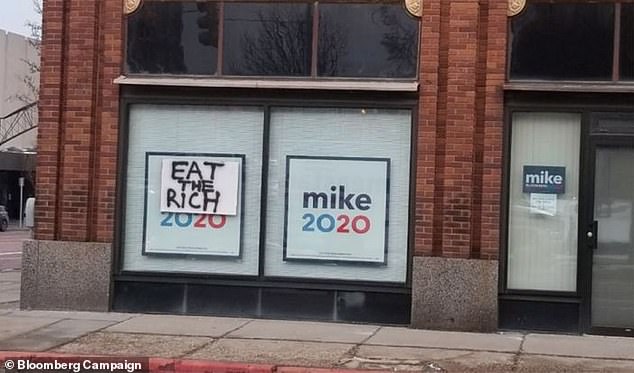 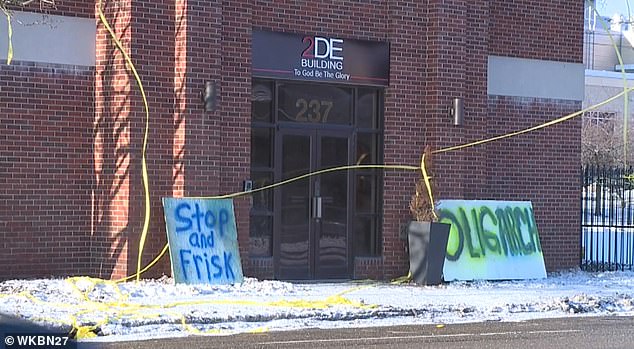 Posters pictured outside of Bloomberg’s field office in Youngstown, Ohio

In the interview, Sanders is also set to criticize the amount of money Bloomberg during his campaign.

FEC reports indicate that the billionaire spent an average of $7 million per day in January – nearly three times the total net worth of Sanders, who is estimated to have a total of $2.5 million in assets.

‘I am worried about an unprecedented amount of money being spent on a campaign,’ Sanders said in the 60 Minutes preview.

‘We’ve never seen anything like this in American history and I just think, though, that the American people will rebel against this type of oligarchic movement.’

‘We are a democracy – one person, one vote – not a guy worth $60 billion, buying an election,’ he stated. 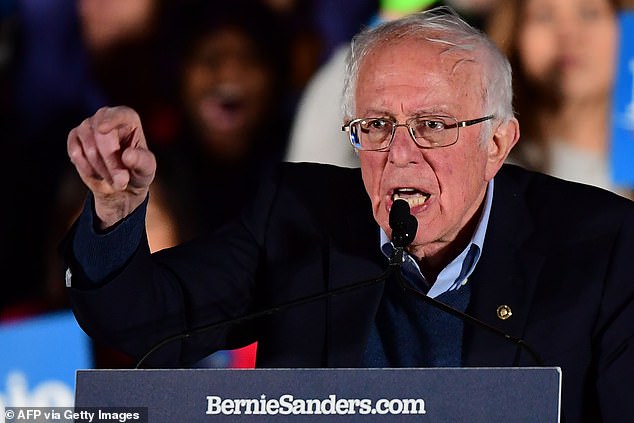 Sanders has been a fierce critic of billionaire Bloomberg

Meanwhile, the pair sparred during Wednesday night’s Democratic debate about whether billionaires deserve to exist.

Bloomberg, who is worth around $63 billion, said he ‘worked very hard’ for his money.

Sanders had suggested that Bloomberg’s wealth was a policy failure, with rich donors pushing lawmakers to allow for the tax code to tilt toward billionaires, while other Americans are living on the streets.

‘I can’t speak for all billionaires, all I know is I’ve been very lucky, made a lot of money and I’m giving it all away to make this country better,’ Bloomberg said. ‘A good chunk of it goes to the Democratic Party as well,’ he added.

‘We’re not going to throw out capitalism. We tried that. Other countries tried that, it was called ‘communism’ and it just doesn’t work,’ Bloomberg argued.

Sanders raged back that he wasn’t a ‘communist,’ calling the comment a ‘cheap shot.’

Things got even more heated when Bloomberg pointed out the Vermont senator’s own wealth and property holdings.

‘What a wonderful country we have. The best known socialist in the country happens to be a millionaire with three houses,’ Bloomberg said. 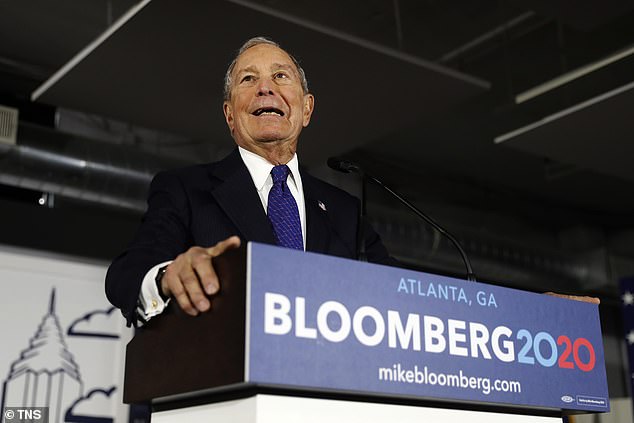 Bloomberg spent an average of $7 million per day  on his campaign in January – nearly three times the total net worth of Sanders, who is estimated to have a total of $2.5 million in assets

Fox Information host accuses her swanky nation membership of refusing to seat her due to political o...
Indian MP dressed like Adolf Hitler in parliament
Tennessee father arrested for setting his daughter's wheelchair on fire while she was in it
AOC and Megan McCain lead backlash against Trump's 'racist' tweet
Tsunami warning as powerful 7 magnitude earthquake strikes off Indonesian island of Sumatra
Newly uncovered tax documents show Trump kept '2 sets of books for properties in NYC'
Marsha Blackburn releases statement trying to patch up relationship with Taylor Swift
NYC's streets shut to traffic in desperate efforts to encourage social distancing