A snake robot that can nimbly slither its way up large steps has been developed by scientists to help search and rescue missions.

US engineers studied how the real-life serpents moved and used their observations to make a snake robot that can climb large steps.

It is thought that snake robots may some day help in the exploration of inaccessible terrain, such as across building rubble after an earthquake.

The breakthrough in robotic engineering uses a ‘car-like suspension’ to keep the wheeled robot level as it climbs tricky stairs. 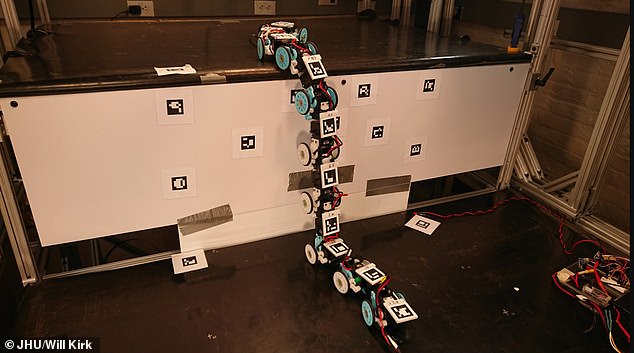 ‘We look to these creepy creatures for movement inspiration because they’re already so adept at stably scaling obstacles in their day-to-day lives,’ said senior author Chen Li, an assistant professor of mechanical engineering at Johns Hopkins University.

‘Hopefully our robot can learn how to bob and weave across surfaces just like snakes.’

Snakes live in diverse environments ranging from hot deserts to lush tropical forests, where they slither up trees, rocks and shrubbery every day.

Previous studies had mainly looked at snake movements on flat surfaces, but rarely in 3D terrain except for on trees.

Professor Li said these investigations did not necessarily account for real-life large obstacles that search and rescue robots would have to climb over.

Researchers first studied how the kingsnake – which can be found living in both deserts and pine-oak forests – climbed steps in Professor Li’s at the university’s campus in Baltimore, Maryland.

‘These snakes have to regularly travel across boulders and fallen trees – they’re the masters of movement and there’s much we can learn from them,’ he said.

‘It is a generalist, meaning that it can live and move well in many kinds of environments,’ said Qiyuan Fu, graduate researcher at Johns Hopkins.

The scientists simply observed how the creature slithered up the stairs.

Through a series of experiments, the study — which has been published in  — found the snakes partitioned their bodies into three sections.

Their front and rear wriggled back and forth on the horizontal steps like a wave, while their middle body section remained stiff, hovering just so, to bridge the large step.

Scientists noticed the wriggling portions provided stability to keep the snake from tipping over.

At the same time the middle body section remained roughly the same length, suspended vertically above the two steps.

If the steps got taller and more slippery, the snakes would move more slowly and wriggle their front and rear body less to maintain stability.

Using this information, the team created a robot to mimic the kingsnakes’ movements and replicate the wave-like oscillation pattern.

After their robotic snake couldn’t climb the steps without tilting sideways and falling over, the team added a ‘car-like suspension’ to the robot’s design, consisting of a spring between the body and the wheels.

This allowed the robot to stay level while climbing the stairs.

The researchers say that their creation even came close to matching an actual snake’s speed.

‘The animal is still far more superior, but these results are promising for the field of robots that can travel across large obstacles,’ Professor Li said.

The team plan to test and improve the snake robot for even more complex 3D terrain with more unstructured large obstacles.

New York rapper Casanova and his entourage 'left a lady diner with a damaged jaw and 4 stitches'
Drought conditions causing San Joaquin Valley to dip by up to 50cm
Kavanaugh's ex-roommate says the SCOTUS nominee lied under oath
Why pilot and author of Cockpit Confidential, Patrick Smith, hates spinner bags
Kelsey Berreth daughter Kaylee poses on a plane in first photo since the death of her mother
Sony Pictures reveals it's 'disappointed' that Kevin Feige is not involved in Spider-Man franchise
Amature photographer captures image of 'one in a million' three-antlered deer in Michigan
Texas dad drives more than 1,100 miles to surprise daughter with Chick-fil-A on her 19th birthday