Donald Trump Jr told the mother of a 15-year-old Trump supporter who was allegedly assaulted outside a polling place in New Hampshire by a ‘sick leftist’ on primary day earlier this week that the first family ‘has your back.’

Patrick Bradley, 34, of Windham, New Hampshire, was arrested after allegedly slapping a teenager across the face at a polling site on Tuesday because the boy was wearing a MAGA hat.

Police said Bradley had gone to Windham High School – a polling location – to vote in the state’s first-in-the-nation presidential primary when he walked by a Trump campaign tent. 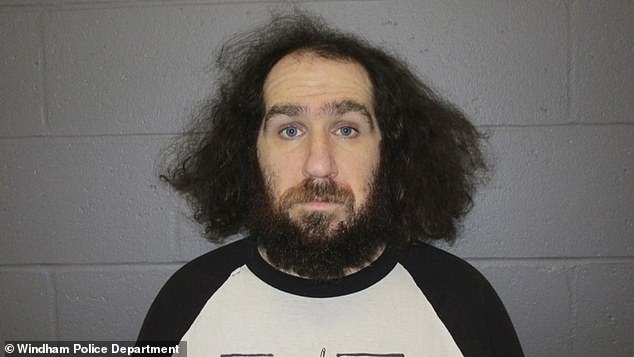 Patrick Bradley, 34, was arrested after he allegedly slapped a MAGA hat-wearing teenage boy across the face at a New Hampshire polling station Tuesday 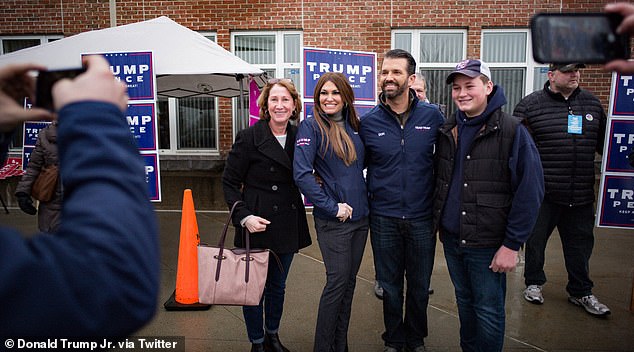 The teen had been volunteering at the Trump campaign tent outside the polling station. Donald Trump Jr. (center with beard) tweeted a photo showing him meeting the teen (far right) the day of the incident 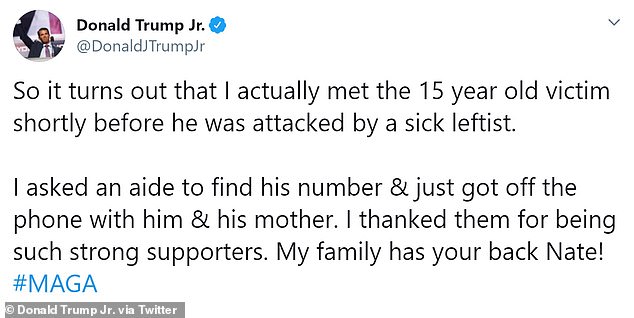 Don Jr. said that the Trump family supports the teen who was allegedly assaulted

Bradley then ‘slapped a 15-year-old juvenile across the face,’ at which point two adults tried to protect the teen, police said, according to . The adults later accused Bradley of assaulting them.

During the same incident, ‘Bradley was also accused of throwing TRUMP campaign signs and attempting to knock over the aforementioned tent,’ police said.

The 15-year-old boy – who Donald Trump Jr. has since identified as being called Nate in a photo he on Twitter – was wearing a red ‘Make America Great Again’ hat and had been volunteering in the Trump tent at the time of the incident.

The boy’s mother, Cathy Campbell, told Fox News that although he is a student at Windham High School, he was not in school because he had a doctor’s appointment that day. But, she did drive him to the school so she could vote in the primary.

‘When we got there, we saw Donald Trump Jr. and Kimberly Guilfoyle, and my son was over the moon,’ Campbell told the news station, calling the boy ‘the most patriotic kid you’d ever meet in your life.’ 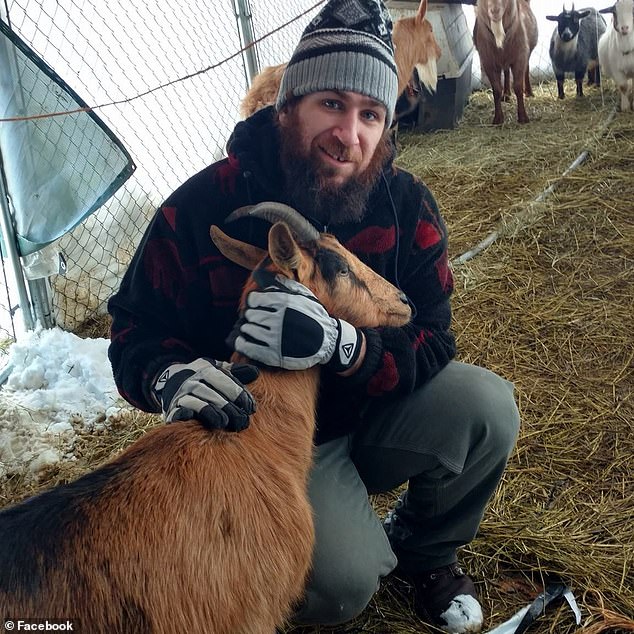 Bradley (pictured) was said to have exited the polling site and seen the teen wearing the MAGA hat, before saying ‘f**k you’ to him and then slapping the boy across the face 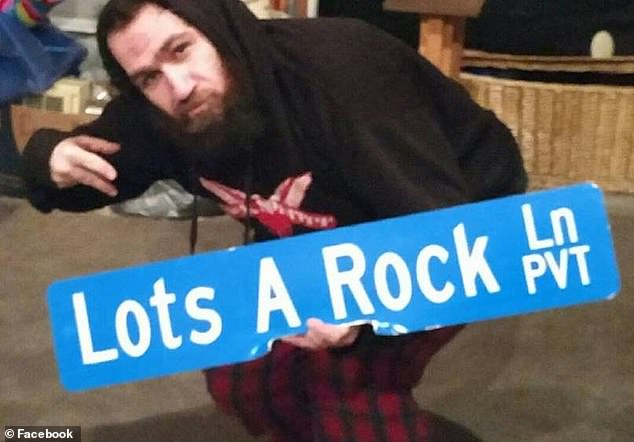 Bradley (pictured) then allegedly threw Trump campaign signs around and attempted to knock over the campaign’s tent, while two adults tried to stop him 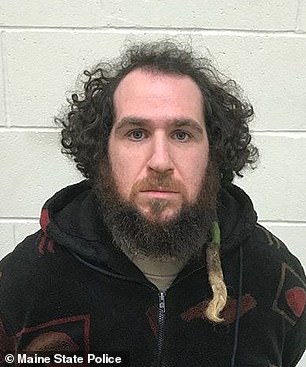 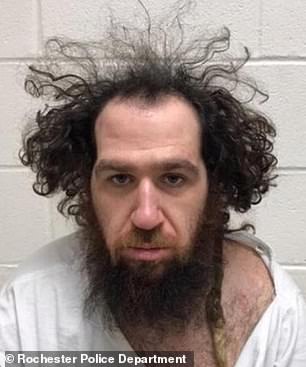 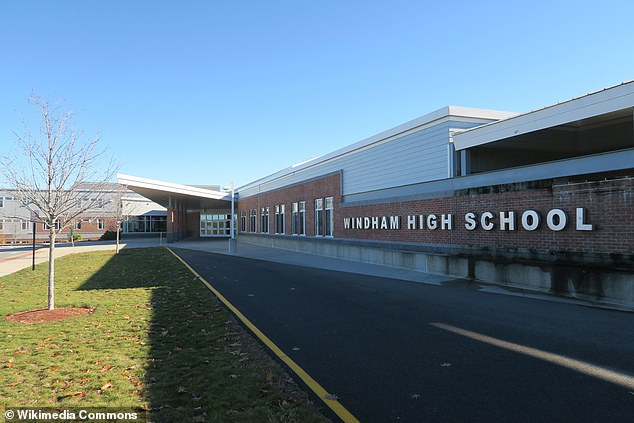 The incident occurred outside the Windham High School, a polling location for the first-in-the-nation presidential primary, Tuesday

Campbell said that Trump campaign later invited the teen to volunteer and hold Trump signs outside the school.

She said that the teen chose to wear the divisive hat while volunteering, noting that she was ‘apprehensive about him wearing the MAGA hat, because we know it can provoke and we know people don’t like Trump.’

However, she said that her son wanted to wear the hat because ‘he’s a proud 15-year-old and he doesn’t know what people are going to be like.’

Campbell said that the teen stood out on the sidewalk, telling people to ‘have a nice night,’ but the words ‘triggered’ Bradley.

She claimed that Bradley said ‘f**k you’ to her son, then ‘wound up his hand as fast as he could and slapped him across the face.’

Campbell said that a MAGA hat-wearing man who tried to help her son was left with a fractured jaw during the incident. 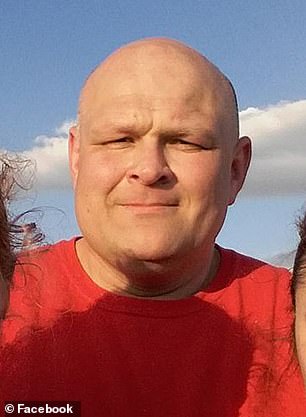 New Hampshire man Stephan Leclerc claimed to have been one of the people involved in intervening between the teen and Bradley.

Leclerc on Facebook that Bradley ‘threatened us walking in front our Volunteer booth (VOTER INTIMIDATION) , he struck a minor , struck me trying to stop his stampeding in our Volunteer tent.’

He said that police initially let Bradley go, despite his having a warrant.

‘All the witnesses were upset that the vigilante Antifa like man was let go,’ Leclerc said.

The day after the incident, Don Jr. took to Twitter to reveal that he had met the teen and that the Trump’s are on his side.

‘So it turns out that I actually met the 15 year old victim shortly before he was attacked by a sick leftist,’ Don Jr. tweeted.

‘I asked an aide to find his number & just got off the phone with him & his mother. I thanked them for being such strong supporters. My family has your back Nate!’

Don Jr. also tweeted out a picture of the teen posing for a picture with him and Guilfoyle. The teen is not wearing a MAGA hat in the image.

Campbell told Fox News her son is ‘the sweetest kid’ and that he is now ‘pretty traumatized’ by what happened Tuesday.

She said that the teen ‘certainly did nothing wrong’ and that ‘It sickens me that people would be angry at a kid for wearing a stupid hat.’

Campbell said that she and her family are Trump-supporting Republicans. She added that her son is back in school and that his peers are giving him support.

After the incident Bradley was held on $5,000 cash bail, in addition to an administrative hold for a probation violation.

Bradley has been arrested several times in the past, according to reports.

In January 2017, Maine State Police arrested him on a felony drug trafficking charge after allegedly finding 7.7 lbs. of vacuumed sealed marijuana in his car, according to .

In March 2017, Bradley was arrested on charges including felony reckless conduct, simple assault of an officer, disobeying an officer and driving after suspension, following an incident in which he allegedly rammed his car into another driver’s car, reported.

Bradley is expected to be arraigned on Friday.