President slapped back at Bill Barr Friday, asserting the ‘legal right’ to intervene in criminal cases, after his attorney general warned him his tweets and comments made it difficult to do his job.

Trump’s pushback, which he put out on Twitter, capped off a week of extraordinary statements about the criminal case of longtime advisor Roger Stone, who was convicted of witness tampering and lying to Congress about contacts with WikiLeaks.

Trump began by quoting from Barr’s extraordinary interview with ABC News, where he said: ‘The President has never asked me to do anything in a criminal case.

Then he added: ‘This doesn’t mean that I do not have, as President, the legal right to do so, I do, but I have so far chosen not to!’ 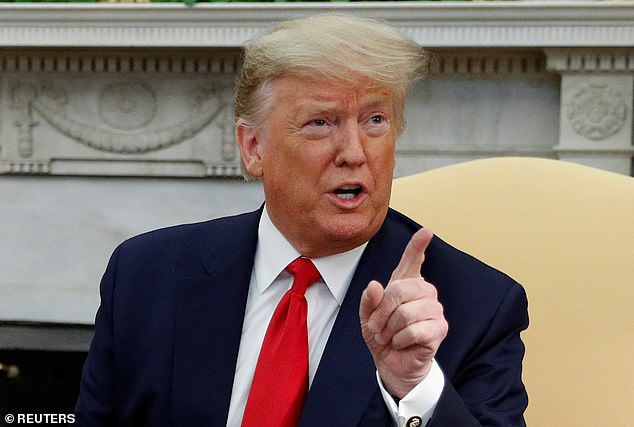 President Trump said he had the ‘legal right’ to intervene in criminal cases ‘but I have so far chosen not to!’

‘I think it’s time to stop the tweeting about Department of Justice criminal cases,’ Barr told the .

‘I cannot do my job here at the department with a constant background commentary that undercuts me.’

It was rare pushback for a cabinet official against Trump, although according to the White House, it was not something the president had a problem with.

‘The President wasn’t bothered by the comments at all and he has the right, just like any American citizen, to publicly offer his opinions,’ White House Press Secretary Stephanie Grisham said in a statement.

‘President Trump uses social media very effectively to fight for the American people against injustices in our country, including the fake news. The President has full faith and confidence in Attorney General Barr to do his job and uphold the law,’ she said. 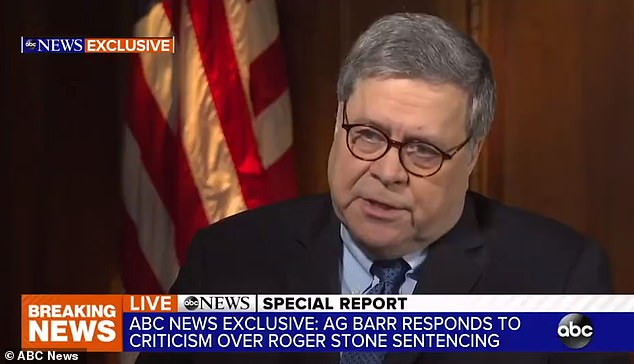 ‘I cannot do my job here at the department with a constant background commentary that undercuts me,’ Barr told ABC after days of Trump commentary on the Roger Stone case 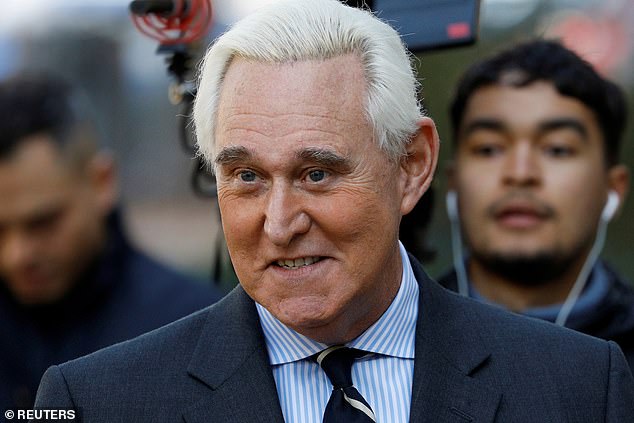 Trump’s defense of his conduct came after a week where he blasted the government’s initial sentencing recommendation of nine years for Stone, a move that prompted a swift turnaround by the Justice Department. Trump also went after the judge overseeing the case, as well as the jury fore person, who he accused of bias after it was revealed she ran for Congress as a Democrat in 2012.

His comments provoked an uproar, with some Democrats demanding Barr resign or be impeached. It also followed a week where Trump pushed out people who testified against him or acted against his perceived interests during impeachment.

The clash comes ahead of the scheduled sentencing next Stone, the former Trump consiglierie who was found guilty of lying to Congress, obstruction and witness tampering.

Dour federal prosecutors asked had themselves removed from the case after DOJ’s turnaround, which followed Trump’s tweet blasting the sentencing recommendation for Stone. Investigators were interested Stone’s take on any interactions with WikiLeaks as they probed Russia’s 2016 election hacking.