A cruise ship passenger is being tested for the deadly coronavirus after attempting to board the vessel in Sydney.

The passenger, a woman in her 50s, was taken to hospital after she became unwell and was suffering respiratory illness.

The ship, the Norwegian Jewel, arrived in Sydney on Friday morning after a 10-day tour of New Zealand. It was due to make its way to Melbourne on Saturday. 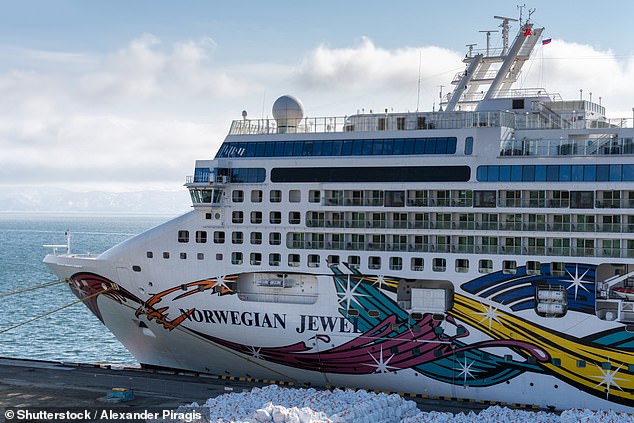 The ship, Norwegian Jewel, arrived in Sydney on Friday morning after a 10-day tour of New Zealand

It is understood passengers were in lockdown for 45 minutes before being allowed to disembark the vessel at 9am on Friday.

NSW Health said the passenger was being screened as a precaution.

Norwegian Cruise Line, operators of the Norwegian Jewel, said the vessel remained in operation and all the passengers were healthy.

‘There is absolutely no truth to this. The vessel remains in operation, and all guests onboard are in good health.’

Australia currently has 15 confirmed cases of coronavirus while 11 Australians are among 65 newly-confirmed cases aboard the quarantined Diamond Princess cruise ship docked at Yokohama in Japan.

An Australian tourist on board Diamond Princess, Bianca D’Silva, called the ship a ‘floating prison’.

She was separated from her family and placed into quarantine after contracting the virus.

Ms D’Silva said she started feeling ill while all passengers were cooped up in their cabins for a week during the outbreak.

‘I got a lot of headaches initially, when I was told we were quarantined, I started feeling hot with a fever,’ she said.

‘But other than that I feel fine … it just feels like I have a cold.’

The disease is believed to have emerged in a market in Wuhan that sold wild animals, spreading rapidly as people travelled for the Lunar New Year holiday in late January.

The virus has so far spread to more than 20 countries, prompting the World Health Organization to declare a global health emergency.

Saturday will mark two weeks since Prime Minister Scott Morrison announced a temporary 14 day ban on foreign travellers who have left or passed through mainland China from arriving on our shores. 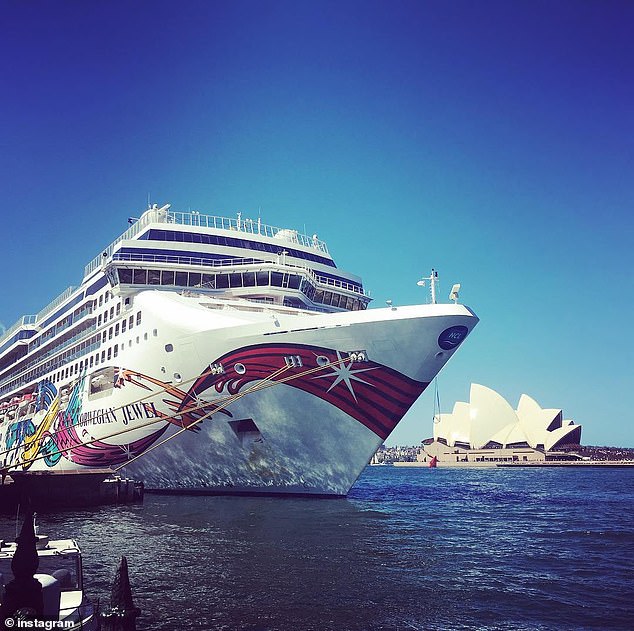 The man was taken from the ship while all other passengers have been stopped from leaving. The 294-metre ship has a guest capacity of 2376 people and 1060 crew

Health Minister Greg Hunt has warned the travel ban will likely be extended as the worldwide death toll surges towards 1000.

Mr Hunt added the government acted on the best medical advice to implement the ban.

‘Ultimately, our job … our responsibil­ity, is to provide protection and national health security for the Australian people,’ he said.

The Government admits the ban has taken a toll on the tourism industry, which is losing an estimated $1billion a week.

AUSTRALIANS WITH THE CORONAVIRUS

Kim Kardashian reveals she is pushing Trump to free another convicted felon
Widow poses for a Calendar Girls style shoot in memory of her late husband
Cryptic message from British cruise ship worker, 20, just days before he vanished overboard
Mo Farah puts row with running great behind him with bid to win London Marathon
M&S speeds up its plan to shut 100 stores with an 11% fall in pre-tax profits forecast
Fitness instructor tells Sir Philip Green to face her in US court over groping claims
Zoe Ball loses one million listeners from her BBC Radio 2 breakfast show a year after taking over
How the son of a company director grew up to commit horrific crime at Tate gallery