The 45-second clip is famed for the urban legend — which is now thought to be false — that cinema-goers fled the theatre when they saw the film for the first time for fear the train would burst through the screen.

YouTuber Denis Shiryaev posted the remastered video on his site which is now in 4K quality at 60 frames per second. 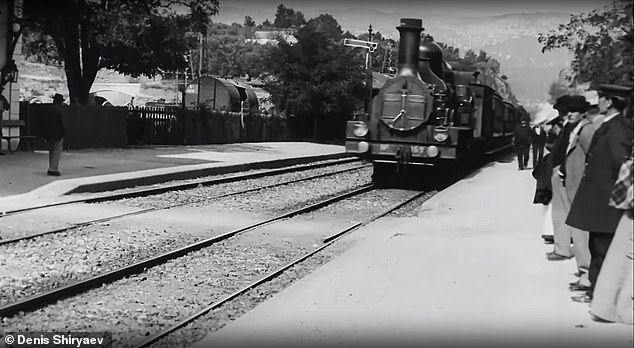 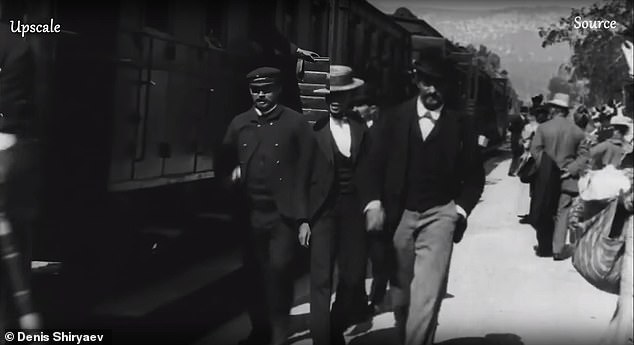 The upscaled and source videos look very different when compared side-by-side (pictured). the higher quality of the AI-enhanced clip is clear in this image of passengers. On the left a man is seen in crisp definition whereas the right shows the rougher appearance of the 125 year old video

They are freely available online and Gigapixel AI uses an algorithm which ‘analyses the image and recognises details and structures and “completes” the image’ according to its website.

It clears up and sharpens the images even if they have been enlarged and become blurry.

DAIN is the technique responsible for the enhanced frame rate as it inserts frames into an existing video clip in a similar way to 4K video smoothing. 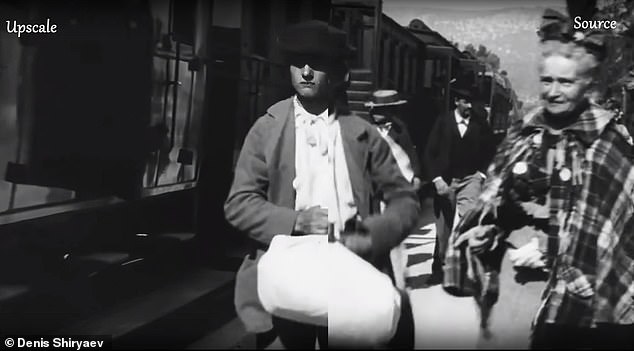 The remastered video isn’t perfect, a range of visual artefacts can be seen in the objects on the clip but as a whole it is far superior. Glitches can be seen as the people wander towards the camera and the train has an unusual wave appearance

The image is, as a result, much more modern in its appearance compared to the original version from 1895.

It isn’t perfect – a range of visual artefacts can be seen in the objects on the clip.

Glitches can be seen as the people wander towards the camera and the train has an unusual wave appearance.

These are easily identifiable on bigger screens but the almost seamless result is still very impressive.

The video is still black and white, but it could be colourised if another neural network was employed

Translated from french, it means ‘Arrival of a Train at La Ciotat’.

It was filmed by Louis Lumière, one of the famous Lumière brothers.

He was a pioneer of motion pictures and the equipment used to capture moving images on film.

The short 45-second clip is unassuming, it features a slow chugging steam train rolling into a train station,

however, its fame comes from various urban legends surrounding its screening in a movie theatre.

The 19th century cinema viewers were said to be so staggered and scared by the moving images they fled the theatre in fear.

Experts now believe this to be false and it is an inflated tale enhanced over time and now etched into folklore.

Moment giant 120-ton RAF military Airbus sweeps in to land on Welsh beach in training mission
Etiquette expert William Hanson reviews Public - an uber-trendy hotel for millennials in NYC
British mother, 39, makes desperate plea for return of two-year-old son after he was taken to Iran
Mother sues NHS for £200,000 for failing to carry out tests to reveal her baby's Down's syndrome
Disney's back on old ground with its Lion King remake but BRIAN VINER says it's spectacular
Killing IRA man Seamus Bradley as he ran across Londonderry field in 1972, coroner rules
O2 is heading for a showdown with Ofcom over the regulator's plan to ban three-year phone contracts
Rabbi Jonathan Romain makes a heartfelt plea not to put Jeremy Corbyn in No10