On a cool night in Miami, the 24–year-old displayed ice in his veins. His comeback – rallying his side from 20-10 down with an explosive 21 points in seven incredible fourth quarter minutes will become the stuff of legend.

Not that everyone will have been surprised. Why? Because with Mahomes, you always have a chance. Always. Even when you are 10 down to the meanest offense in the NFL. Even when you have spent three quarters effectively on the run. Even when those marauding, vicious 49ers are coming in for the kill. Always. 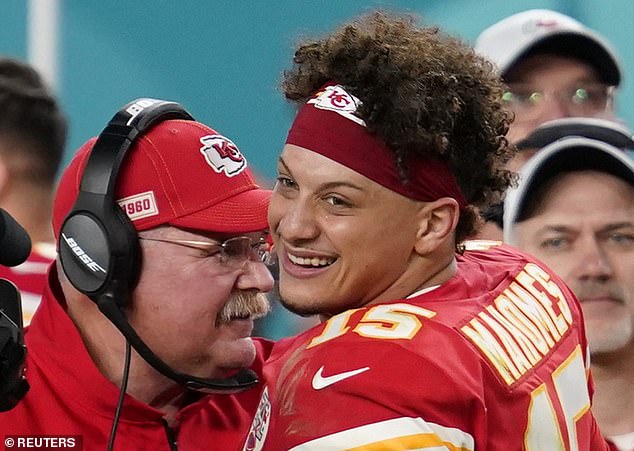 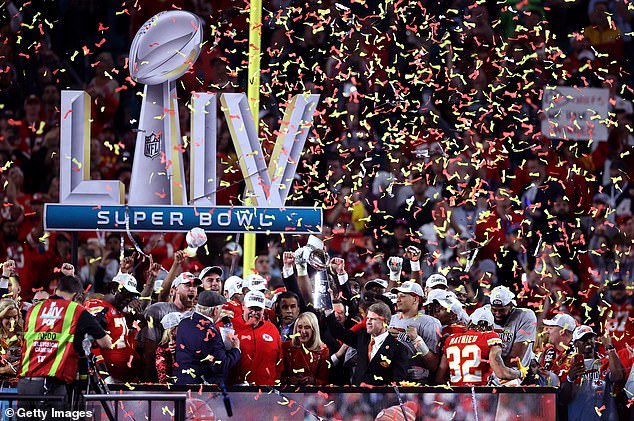 After looking shaky early on, he led his team to a comeback victory in the Super Bowl

Deep in his own half, with just seven minutes and 13 seconds remaining, he faced a 3rd and 15. This was the game. The pressure, as it had all night, came again in another white-shirted Northern California wave.

Mahomes bravely stood his ground before, at the last possible millisecond, launching a bomb down the field. It dropped out of the south Florida night and into the arms of his partner in crime, Tyreek Hill, for 43 precious yards. It was a pass that changed the course of history.

Two plays later they were in, the gap was down to three and the Missouri hordes were sparked into life. An almost inevitable three and out from the 49ers followed and the Tomahawk Chop was ramped up to 11. This time a 38-yarder to Sammy Watkins – who beat the unbeatable Richard Sherman – did the damage. Another pass to a tiptoeing Damien Williams who crept in at the far corner and as quickly as that the job was done.

Williams would stroll in again on a 38-yard victory procession but it was the Most Valuable Player Mahomes who will be talk of the nation’s breakfast table. Another turnaround. This was his third in these play-offs, He brought his team back from 24 points down against Houston and 10 against Tennessee. With number 15 behind the center, anything is possible. 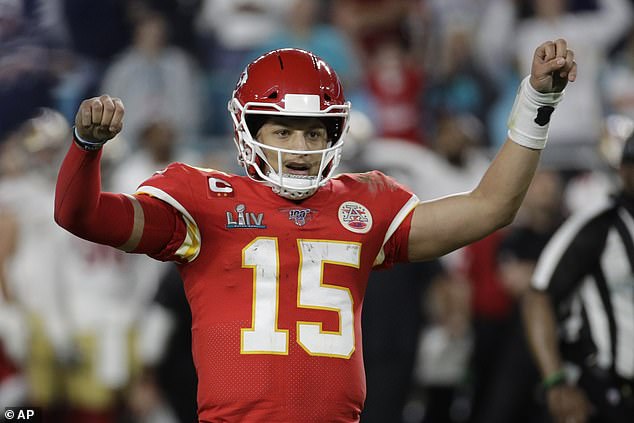 Earlier last week, two lines of police officers had stopped traffic to allow the 49ers to cross a road from their downtown hotel to a meeting. They could have done with those cops here. Mahomes should now become the face of the 20s. The son of a white mum and black father, he becomes just the third African American QB to win the big prize. He is as humble as he is talented.

He can be a force for good in these divisive times. In a tweet from 2013 that quickly circulated following the falling of the confetti, he stated: ‘I bet it feels amazing to be the quarterback who says “I’m going to Disney World” after winning the Super Bowl.’

He got to repeat those words on the Super Bowl 54 stage. He will not have far to travel. On the subject of geographical tweets, the Chiefs’ victory prompted President Donald Trump to congratulate the victors on their win for ‘the great state of Kansas’. 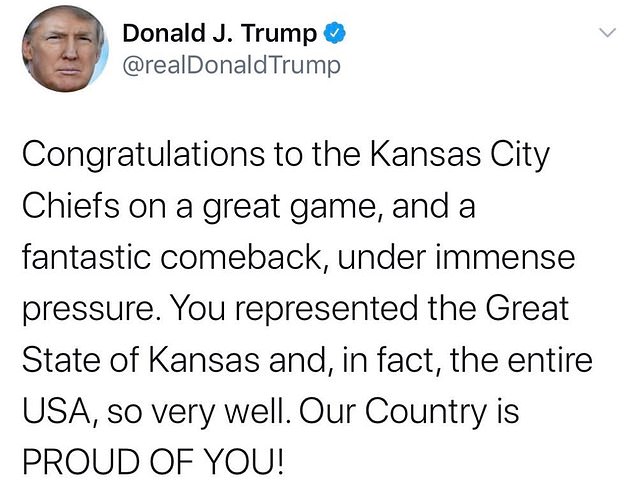 Presumably when someone informed him that Kansas City is in Missouri, not Kansas, the tweet was deleted.

‘I’m glad we kept fighting,’ Mahomes added. But it was he who epitomised that fight. Hit time and time again he was the man who kept on swinging but he was far from punch drunk.

For Chiefs’ coach Andy Reid, the victory will be sweeter than the giant bucket of orange Gatorade dumped over his head. This was the much-loved veteran’s first Super Bowl win. It was Kansas City’s first since 1970 and their second in total. The party will go on for some time. The barbecue will last for days. 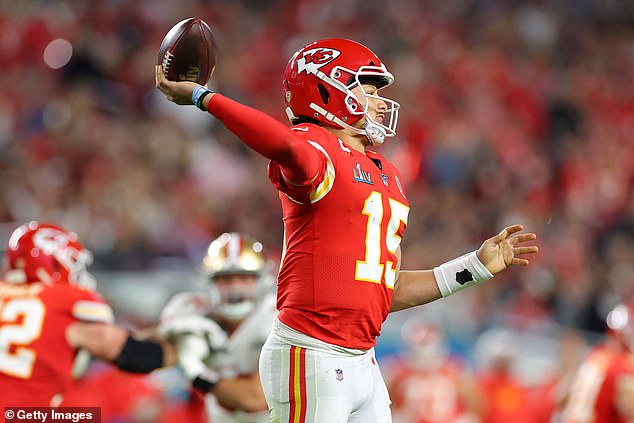 Vegas had struggled to split these two and at half-time they were tied at 10-10, with a touchdown and field goal apiece. Then came the show within the show and the usual rent-a-crowd of giddy youngsters, presumably trained in the art of looking like you are having a good time, prancing at the side of a giant stage in the middle of the pitch.

It was entertaining. Out came Shakira, aided with some Led Zeppelin, to gyrate for a bit, followed by pole dancing Jenny from the block. Those running the concession stands could have taken a fag break. Craftily armed with watches that provided a stunning light backdrop, virtually no fans left their seats as Lopez stole the show before Shakira emerged for an expected duet which featured an unexpected Irish jig. The watches even turned green.

The third quarter belonged to 49ers quarterback Jimmy Garoppolo, who led his side to 10 answered points and answered some critics in the process. Victory was within reach, but it was not close enough. ‘Whatever your dreams are, put the work ethic in and you can be there at the end of the day,’ Mahomes had said in the build-up to the game. Last night those dreams came true for the Comeback Kid and most of America outside the Bay Area celebrated.

Duke of Edinburgh accompanies the Queen to Eugenie's royal wedding
Man who 'flew like Superman' on Vegas zipline suffers head injury 'that required several staples'
Two women are injured after a gas tanker EXPLODES in Los Angeles
TALK OF THE TOWN: Hadids put on a family show as half-sisters join in for red carpet snap
Jeff Bezos parties with Katy Perry and Lil Nas X at Amazon concert
Bill Bryson returns with his most captivating journey yet - through the mysteries of the human body
Vegan diets 'could help people lose nearly a pound a week'
Former NFL quarter-back Tarvaris Jackson dies following car crash