A 26-year-old man has been arrested after a baby was allegedly taken hostage in a five hour stand-off at a Costa Coffee in Nottingham.

Officers swooped on Friar Lane in the city centre after being called to reports of a domestic incident at 12.20pm.

Customers had been evacuated from the shop leaving six policemen to surround the man who allegedly sat with the child in a chair.

Police announced that a man was detained on suspicion of assault following negotiations at around 5.15pm. 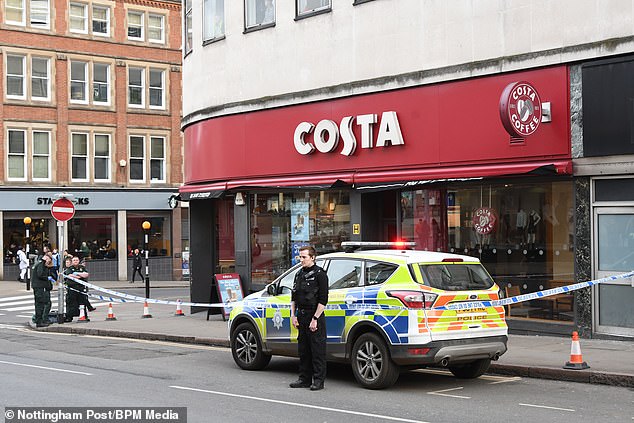 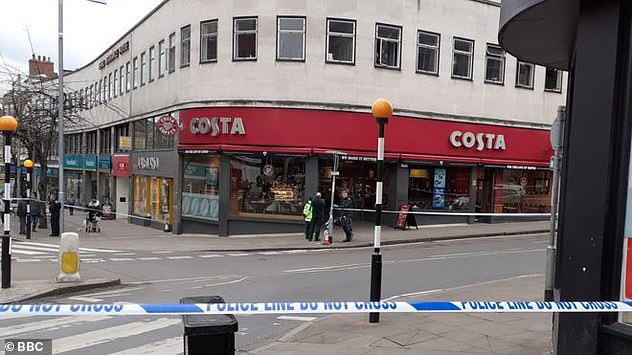 Inspector Paul Hennessy said this evening: ‘We would like to thank the public and local businesses for their patience while we were dealing with this incident, which has now come to a safe conclusion.

‘I would also like to thank our ambulance and fire service colleagues for their help and cooperation with this coordinated incident.

‘The cordon has now been lifted and the area is returning to normal.’

Nikita Riley, who works on the street, told earlier: ‘I was in the break room and one of my colleagues said a child was being held hostage.

‘It’s a bit intimidating seeing all these police and ambulances about. It’s a bit of a shock.’

Peter Kelleher, a bus driver for Trentbarton, said: ‘It’s the world that we live in. This is our bus station now since Broadmarsh closed.

‘They have closed this bus stop [on Friar Lane]. I’m asking people to move on of they’re not waiting for the bus.

‘You see so much going off around the world, it’s normal now it is. It’s not nice to see.’

Kelly Kirby and Zinta Sedlins, from Leicestershire, said they were visiting the Kitty Cafe when police arrived.

They said: ‘We’ve not been to Nottingham for years. But with everything going on now it’s concerning.

‘At first they were not letting anyone in or out [of Costa]. There were two police cars at first and there was a police man outside. They were talking to a man and a baby.’

Charlotte Gregory and Mia Slack, who work for a care company in Friar Lane, said they heard a ‘commotion.’

They added: ‘We heard the police arriving and the sirens. We feel a bit on edge. You do not expect it to happen. We saw a man cradling a baby.’

Around 100 people gathered outside the shop, along with four police cars, two incident response vehicles and an ambulance. 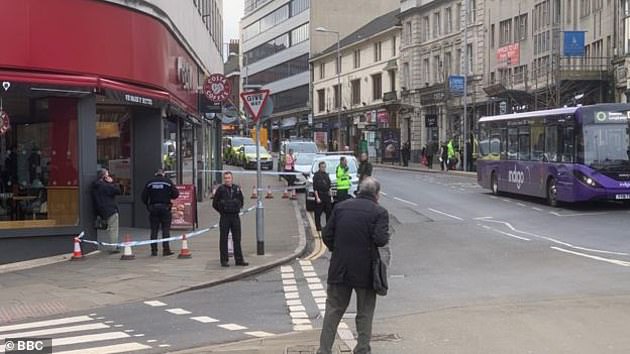 Nikita Riley, who works on the street, said: ‘I was in the break room and one of my colleagues said a child was being held hostage’

A bin lorry appeared to have been driven in front of the shop and was obscuring the windows of the cafe.

A man, who works at the VPZ vape shop in Wheeler Gate, who just wanted to be named Luke C, said the cordon has affected trade.

‘It scares people off. It’s not good. There is always something. It’s getting to the point where it’s a bit unsafe to live.’

Kaleem Ashraf, a taxi driver of 10 years, said: ‘It’s going to have an impact on everyone. People that want to catch the bus.

‘Nottingham is a brilliant place. Its very diverse and can offer a lot. But society in general, for any parents it would create alarm bells.

‘Its a regular basis. The news that you get out there is the sense that you hear about crime all the time.’

Buses were diverted away from Friar Lane and Beastmarket Hill. Nottingham City Council also confirmed Friar Lane, with its junction with Maid Marian Way to Spaniel Row, was closed.

We are British Jews participants talk about the anti-Semitic abuse they have suffered
Steampunks descend on a sleepy Yorkshire town
Reused rocket takes off carrying 64 satellites
Prince Charles hears of the horrors of Normandy from hero fundraiser who is backing France monument
'It was one of the worst days of my life': Danny Baker formally apologises
Oxford Circus tube station is evacuated over 'casualty on the track'
Duke and Duchess of Sussex confirm they'll have US Christmas
Oscars 2020: Best dressed stars shine on SOGGY red carpet