An animal dubbed the World’s Worst Cat has been adopted from a North Carolina animal shelter, despite her grumpy behavior.

Perdita, a four-year-old domestic shorthair, was adopted by Mitchell County Animal Rescue in Spruce Pine, North Carolina, and the organization revealed on she was not for the ‘faint of heart’ if considering adopting.

But despite Perdita’s flaws, and it appears the cat has a few, she found a loving family to take her home following the organization’s viral post about her. 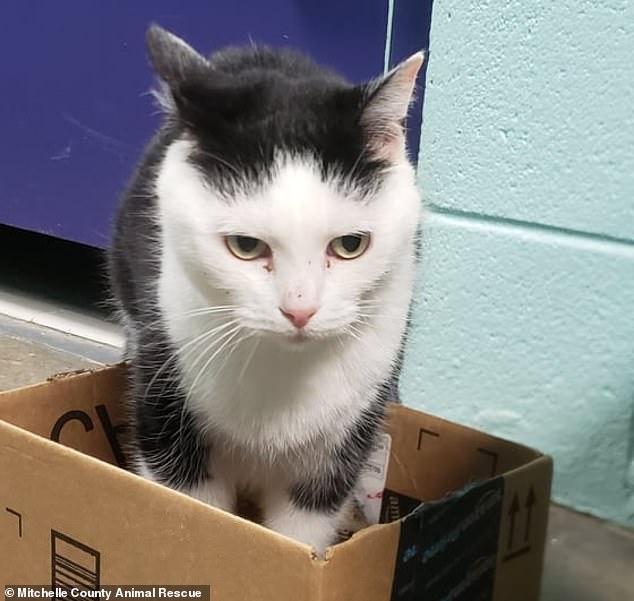 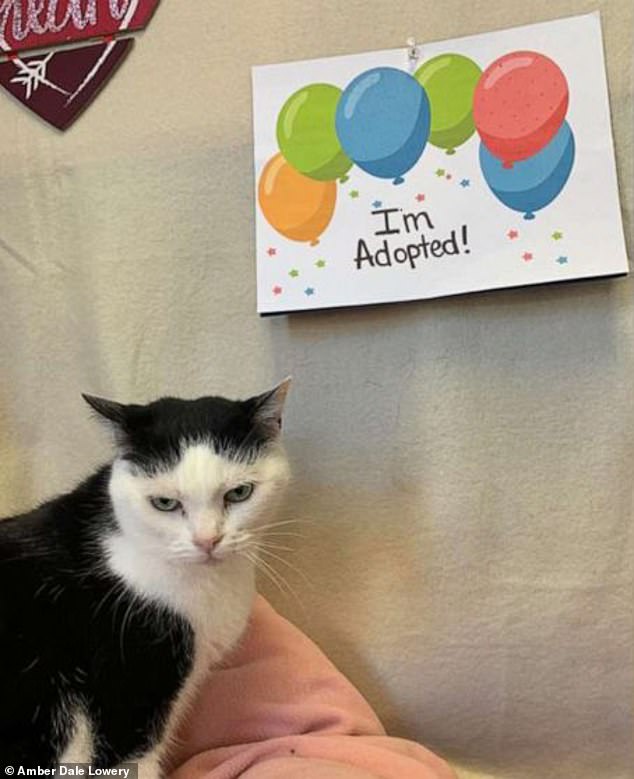 Exciting news: The shelter revealed Perdita was adopted and will go home to a family Saturday after being nicknamed the World’s Worst Cat 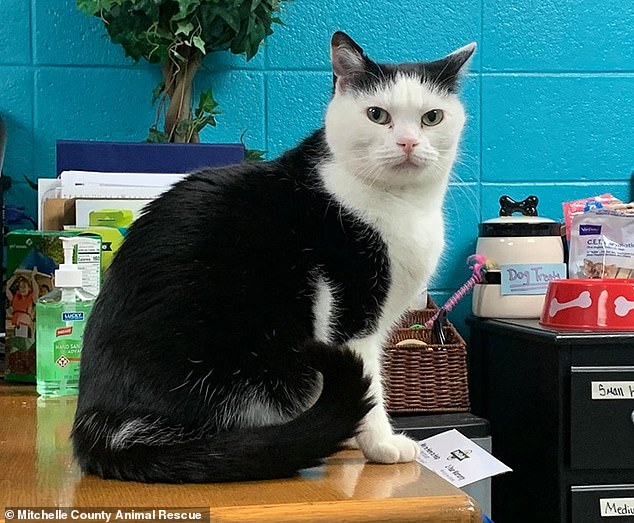 Naughty: The animal shelter nicknamed her the ‘world’s worst cat’ for her behavior

‘LIKES: staring into your soul until you feel as if you may never be cheerful again; the song Cat Scratch Fever, the movie Pet Cemetery (Church is her hero), jump scares (her specialty), lurking in dark corners, being queen of her domicile, fooling shelter staff into thinking she’s sick (vet agrees…she’s just a jerk,’ the organization wrote at the time.

The hilarious post went on to state Perdita also had a fair many dislikes to pay attention to if considering adopting the grumpy cat.

Animal lovers enjoyed the hilarious and blunt post about Perdita, and it was shared more than 9,000 times with people confessing they wanted the cat in their home.

‘I feel like she would be my soul sister,’ one commenter wrote. 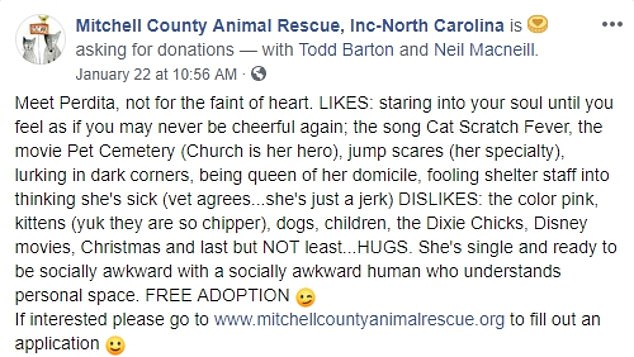 Full post: A post describing the cats likes and dislikes went viral, and it encouraged 175 people to apply to adopt her 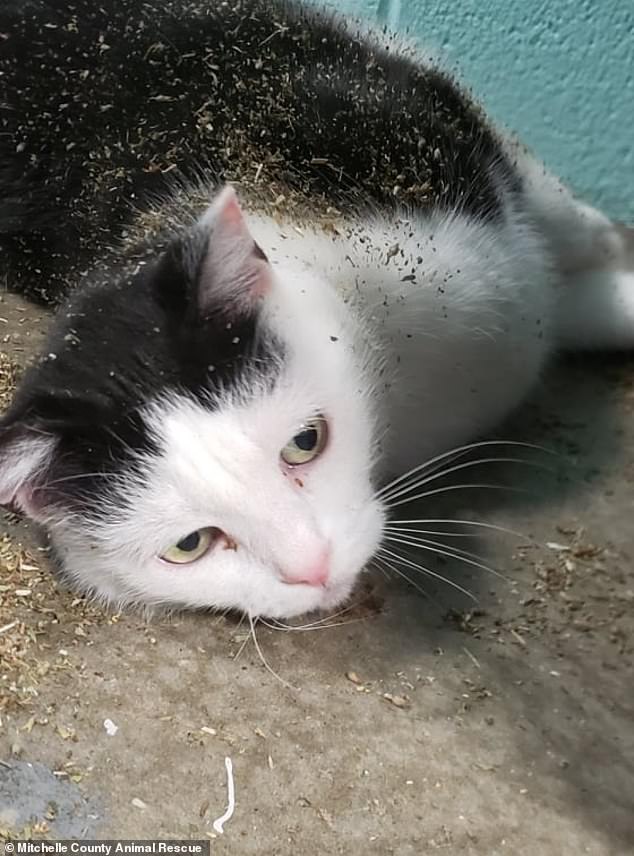 Up to no good: After meeting with different applicants, the shelter finally picked the right family to take home Perdita 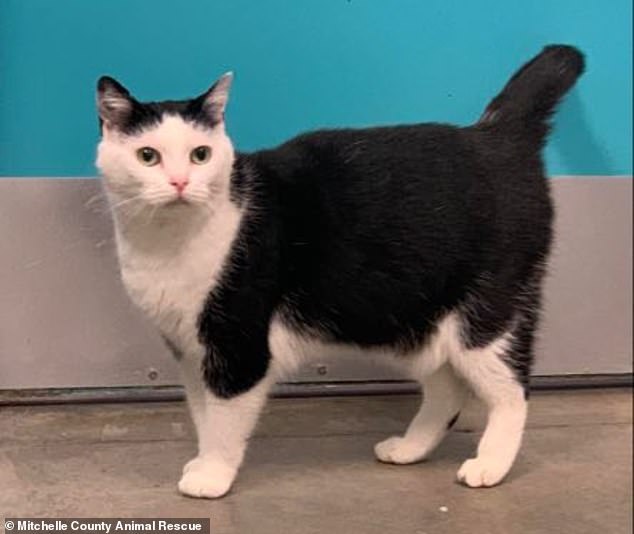 Ready to leave: She will get picked up b y her family on Saturday and leave North Carolina for Tennessee

The animal shelter received 175 applications to adopt Perdita after the viral post, according to , and the organization then narrowed that group down to 10 strong contenders.

Staff then conducted interviews, checked references, and introduced specific candidates to Perdita. Ultimately, it was the cat who chose her new family.

‘Perdita chose her adopters after a successful meet and greet that included minimal growling and very little slapping (on her part…her new cat parents are lovely and don’t growl or slap at all),’ the shelter wrote.

‘We feel confidant in the decision and feel that the couple’s quiet lifestyle, vast cat-experience, patience and cat appropriate house will lead to a successful transition for Perdita!’

Brittany Taylor, the shelter’s office manager, spoke to ABC News and opened up more about what the cat was like living in the shelter.

‘She definitely makes you laugh,’ she said. ‘One minute she wants you, and one minute she’s over it.’

Perdita will be moving to a home in Tennessee on Saturday with her new family, leaving behind a shelter staff who will forever remember the grump cat.

Dog dies while protecting his family from a bear that broke into their home
Orthodox Jewish woman criticized for wearing longer wig
Chinese spacecraft is first to land on dark side of the moon
BREAKING: Top drug distributors 'to pay $18billion to settle opioid lawsuits'
Prince Philip released from hospital for Sandringham Christmas
Tennessee murderer set to be executed by electric chair is served a last meal of pork chops
Convicted rapist Harvey Weinstein is charged with sexual battery by restraint in LA
Coronavirus: Nations hit hardest had most international travel