‘s impeachment trial entered a new phase on Wednesday as senators got their turn to talk, posing questions to the prosecution and the defense amid turmoil over whether or not to call additional witnesses.

Chief Justice John Roberts read the questions – which were submitted in writing by each side, taking turns from Republicans and Democrats to pose their inquiries. 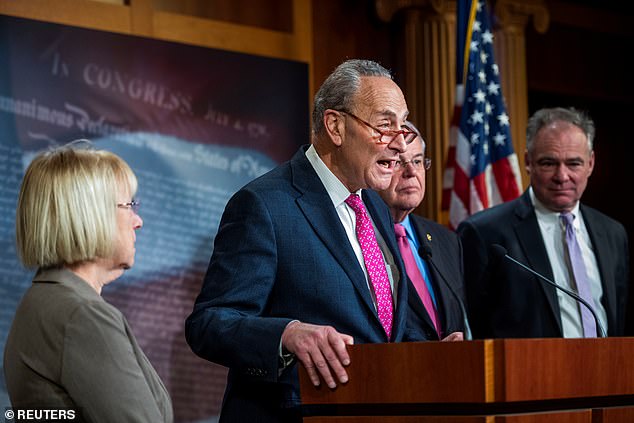 ‘If President Trump had more than one motive for his alleged conduct, such as the pursuit of personal political advantage, rooting out corruption and the promotion of national interests, how should the senate consider more than one motive in its assessment of article I?,’ was Collins’, Murkowski’s and Romney’s question.

‘Once you’re into mixed motive land, it’s clear that their case fails. There can’t possibly be an impeachable offense at all. Think about it. All elected officials, to some extent, have in mind how their conduct, their policy decisions will affect the next election. There’s always some personal interest in the electoral outcome of policy decisions. There’s nothing wrong with that. That’s part of representative democracy,’ he said.

‘The bottom line is once you’re into any mixed motive situation, once it is established there is a legitimate public interest that could justify looking into something, just asking a question about something, the managers’ case fails and fails under their own terms,’ he added.

‘Is there any way for the Senate to returned a fully informed verdict in this case without hearing the testimony of Bolton, Mulvaney, and the other key eyewitnesses or without seeing the relevant documentary evidence?,’ was the question.

Adam Schiff answered on behalf of the House managers.

‘The short answer to that question is, no. There’s no way to have a fair trial without witnesses. And when you have a witness as plainly relevant as John Bolton, who goes to the heart of the most serious and egregious of the president’s misconduct, who has volunteered to come and testify, to turn him away and to look the other way, I think, is deeply at odds with being an impartial juror,’ he said.

‘Don’t wait for the book,’ he told senators, ‘to find the answer for your question.’

‘I would also add in response to the last question, that if any part of the president’s motivation was a corrupt motive, it was a causal factor in the action to freeze the aid or withhold the meeting, that is enough to convict under criminal law,’ he said.

Senate Majority Leader Mitch McConnell reminded both sides to keep their answers to five minutes or less to keep the time moving.

Senators had to sit in silence during the six days of opening arguments in the trial, not allowed to speak.

Before the lawmakers got started, the president issued a warning about witnesses, after Senate Republican Leader Mitch McConnell informed his party he doesn’t have the votes to stop additional witnesses from being called.

‘Remember , the Democrats already had 17 witnesses, we were given NONE! Witnesses are up to the House, not up to the Senate. Don’t let the Dems play you!,’ Trump wrote on Twitter.

As the witness debate is carried on behind the scenes, in front of the cameras senators will get 16 hours spread over two days to ask their questions about impeachment. 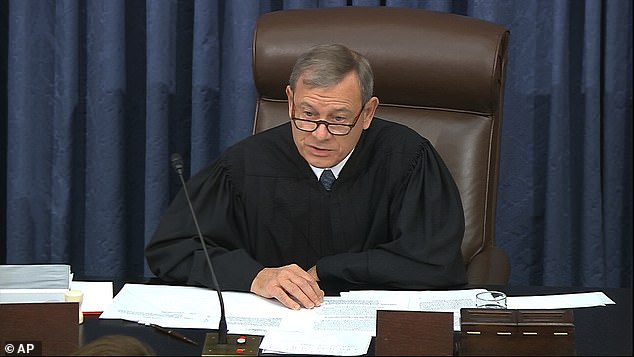 Their inquiries will be submitted in writing and Chief Justice John Roberts will read them aloud, directing them to either the House impeachment managers or the president’s lawyers.

Democrats plan to ask about claims in John Bolton’s book that Trump said aid to the Ukraine should be held until that country agreed to investigate the Bidens, which the president has denied. They are also interested in Rudy Giuliani’s role in the Ukraine.

Republicans plan to focus their questions on Hunter Biden and his work with the Ukrainian gas company Burisma along with Democrats’ contact with the whistleblower.

Members of both parties could also ask friendly questions to their respective sides to help counter elements that come up through the day.

Leadership on both sides will coordinate the questioning – weeding out duplicate inquiries and rejecting outside-the-box ones.

Republican senator Josh Hawley, a close Trump ally, said in a statement he will ask the House managers questions ranging from Adam Schiff’s contact with the whistleblower to Hunter Biden’s work with Burisma during the Obama administration. 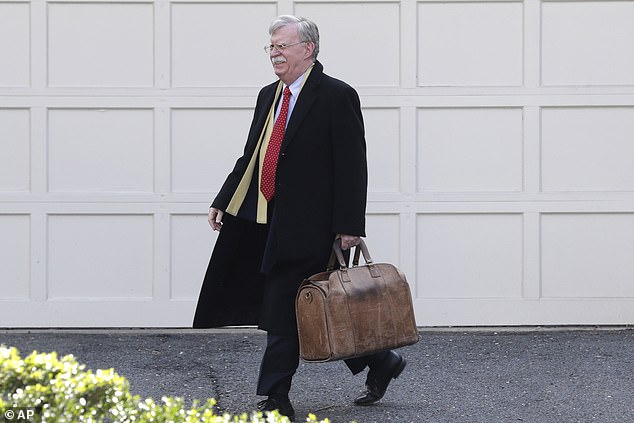 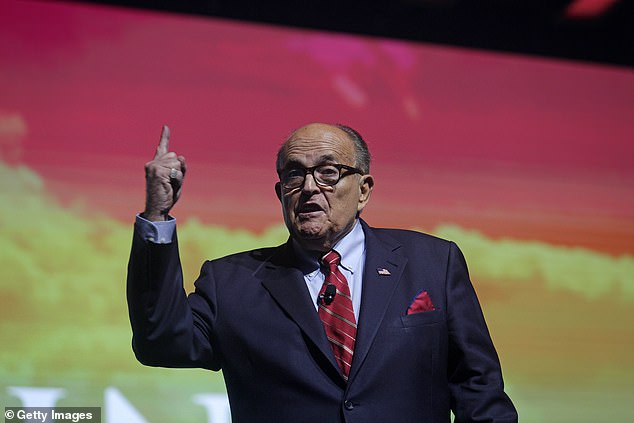 Republican senator Kevin Cramer said he will ask about Rudy Giuliani, Trump’s personal lawyer who represented the president in a shadow role in the Ukraine.

‘I want to confirm that Rudy Giuliani was working personally for the president and not on the behalf of the United States of America,’ he told Axios.

Democratic senator Chris Coons said he wants to know if the entire transcript of the July 25 call between President Trump and Ukrainian President Volodymyr Zelensky was released.

‘On the top of my mind is Professor Dershowitz’s assertion that abuse of power is not a sufficient criteria for impeachment,’ King said. 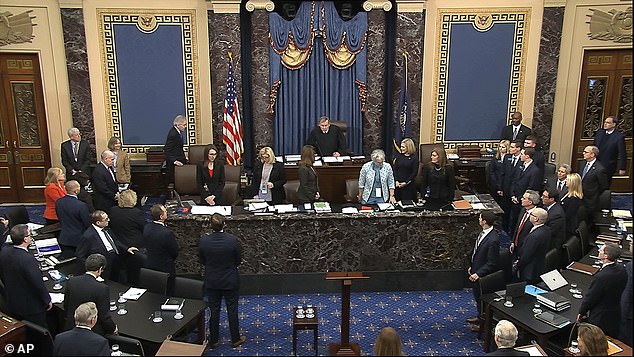 The senators will submit their inquiries on a tan-colored card to Roberts that include their questions, names, signatures and the side they want the question directed to.

Questions will alternate between Republicans and Democrats. Senators cannot ask each other questions.

There will be breaks after every 10 to 12 questions. Wednesday’s session could go late into the night and will resume on Thursday if the time is needed.

After the Q&A period, the Senate will debate whether to call additional witnesses.

McConnell on Tuesday warned there aren’t the votes to block witnesses from being called. His warning came immediately after Trump’s lawyers rested their defense, as party leaders stood firm on the question of keeping out impeachment trial witnesses.

His acknowledgement came during a closed-door meeting with senators Tuesday and was reported by the .

Senate Republicans huddled after Trump’s lawyers made their final arguments that the president’s conduct wasn’t impeachable – using only half their allotted time in a chamber the GOP controls with a 53-vote majority.

Senate Majority Whip John Thune of South Dakota said Bolton’s revelations – which prompted a political battle over whether he should be believed – don’t matter. 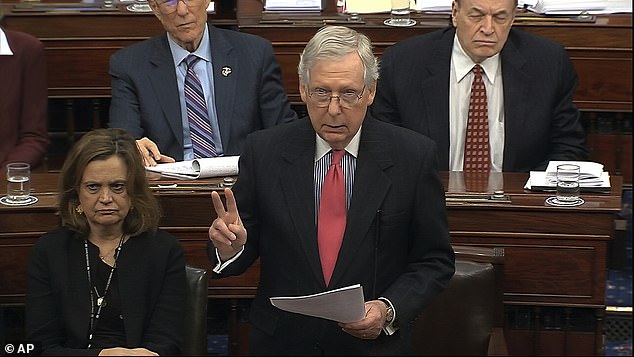 In this image from video, Senate Majority Leader Mitch McConnell, R-Ky., speaks during the impeachment trial against President Donald Trump in the Senate at the U.S. Capitol in Washington, Tuesday, Jan. 28, 2020. Later, he told fellow Republicans the votes

‘I don’t think anything he says changes the facts,’ Thune said. ‘We’re kind of confident’ the Trump impeachment trial won’t extend beyond Friday, he added.

‘The consensus is that we’ve heard enough and it’s time to go to a final judgement,’ Sen. John Barrasso of Wyoming told .

Utah Sen. Mitt Romney says he wants to hear what Bolton has to say, and Sens. Susan Collins of Maine and Lisa Murkowski of Alaska have said they want to hear from witnesses.

Democrats only need four Republican senators to vote with them on calling more witnesses.

A small number of Republicans have either expressed potential support for hearing from witnesses, or said they were holding out until the end of the week. McConnell’s comments is certain to focus minds – and potentially bring more outside pressure from President Trump, who has called the trial a hoax and wants it to end.

Senators acknowledge there is no deal yet on how to proceed, after Bolton’s revelations prompted a series of potential proposals – including deals to pair witnesses for each party, or efforts to subpoena his manuscript without putting the witness himself under oath.

But with several key holdouts saying they are still waiting to make up their minds, Senate Majority Mitch McConnell is telling colleagues he doesn’t have the votes to dispense with witnesses.

Sen. Lamar Alexander of Tennessee, told Capitol reporters he won’t make up his mind until the Senate spends Wednesday and Thursday taking written questions from senators. ‘Then I’ll make a decision about whether we need more evidence,’ he said.

One Democrat, Dianne Feinstein of California, appeared to hedge on whether she wold vote to remove Trump from office, only to issue a clarification via Twitter.

Trump’s defense team concluded its opening arguments Tuesday by taking a hit at Bolton’s upcoming book, claiming it is ‘unsourced’ and insisting the manuscript of the memoir would not be admissible in the trial.

Texas girl whose kids had been killed says she needs one other youngster
Committee of the Judiciary Chairman refers Kavanaugh accuser for FBI investigation
Meghan and Harry open ANZAC Memorial at Sydney's Hyde Park
Parents sue Tesla over fiery 116mph crash that killed two Florida teens
Could you cash in on your clutter? We find out what our junk is worth
Apple CEO Tim Cook says it is unlikely the iPhone will ever be made in the US
British tourist, 68, tells of coronavirus quarantine hell in 'prison like' Vietnam hotel
Norwegian Escape cruise workers share rooms amid coronavirus pandemic despite big space availability