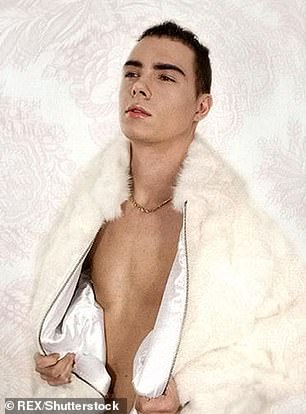 Luka Magnotta had set up at least 70 Facebook pages and 20 websites under different names, which he used to plant rumours about himself, including that he was in a relationship with a high-profile convicted murderer

Deanna Thompson was scrolling idly through Facebook one evening when she saw a video link.

It had attracted tens of thousands of views on social media and almost as many comments.

When she clicked on it, the animal lover was merely hoping to distract herself from the breakdown of her relationship and, noticing it featured two tiny kittens, assumed she was about to see yet another video of some adorable pets playing together.

So what Deanna actually found was all the more traumatising: she watched in horror as a hoodie-wearing figure put the two kittens in a translucent plastic storage bag, switched on a vacuum cleaner and sucked out all the air. He continued filming as the creatures died a terrible death.

The shock changed Deanna’s life, transforming her into an amateur sleuth obsessed with tracking down the brute responsible.

Along with a growing army of ‘detectives’ on Facebook, she sparked a two-year hunt for the man eventually unmasked as Luka Magnotta – a killer whose actions became ever more desperate as his online notoriety grew.

Now that search and its consequences are the subject of a compelling Netflix documentary, Don’t F*** With Cats.

Since its release a few weeks ago, it has become one of the most talked-about true crime series of recent years.

Its troubling themes have proved too harrowing for some viewers.

Yet millions more have found themselves transfixed by a drama which shines a light into the darkest recesses of the internet and poses uncomfortable questions about a culture – and profit-hungry behemoths such as Facebook – which give a platform to anyone seeking fame or, in this case, notoriety. 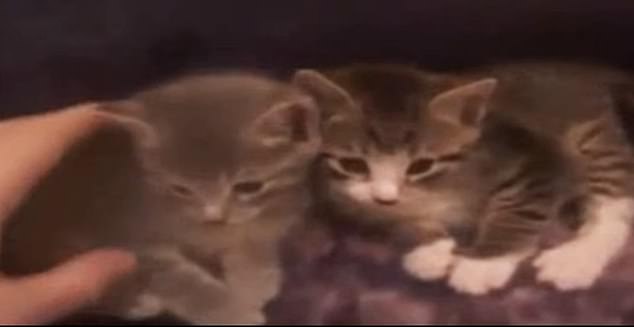 What Deanna actually found was all the more traumatising: she watched in horror as a hoodie-wearing figure put the two kittens in a translucent plastic storage bag, switched on a vacuum cleaner and sucked out all the air. He continued filming as the creatures died a terrible death

The hunt for the kitten killer is an example of the so-called ‘hive mind’ – a collective consciousness similar to the behaviour of bees – as internet users around the world came together to solve what would turn out to be a series of appalling crimes.

Yet, as the documentary makes clear, it was that same intensity of online attention which drove Magnotta to acts of ever greater cruelty.

‘The documentary was never going to be just about killing,’ said its British director, Mark Lewis, who first proposed it to Netflix 18 months ago.

‘This story is all about internet culture, about chasing self-esteem online.’

The video which set the story in motion – the one seen by Deanna – was first posted on December 21, 2010 with the title 1 Boy, 2 Kittens.

The most distressing parts of the footage are hidden from Netflix viewers and instead we see Deanna’s tearful reaction.

It is all the more disturbing as the perpetrator, with his face pixelated, appears to be playing affectionately with the kittens before suffocating them.

‘It’s heartbreaking,’ says Deanna, as she describes one of the kittens’ attempts to save itself.

‘It reels you into thinking, “Oh, this is a super-cute video, he loves those cats.” But suddenly it turns into something brutal.’

The title of the series refers to one of the internet’s most basic unwritten rules: that virtually anything can be shared online, no matter how sordid, except anything which harms cats. The public response was overwhelming.

Deanna, a self-confessed computer nerd who works as a data analyst for a Las Vegas casino, immediately became part of a Facebook group of about 15,000 set up to find the unknown killer and who pored over every frame of the video in forensic detail. 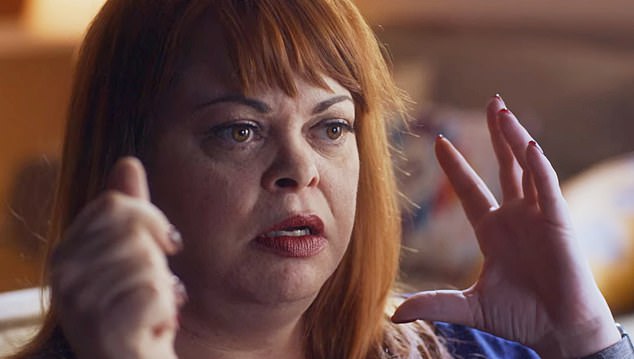 The shock changed Deanna’s life, transforming her into an amateur sleuth obsessed with tracking down the brute responsible. Along with a growing army of ‘detectives’ on Facebook, she sparked a two-year hunt for the man eventually unmasked as Luka Magnotta – a killer whose actions became ever more desperate as his online notoriety grew

The cover on the bed where the crime took place, a Russian-sounding voice in the background, the type of Marlboro cigarettes smoked by the perpetrator – all were scrutinised for hints about the man’s identity or location.

And piece by piece, suggestion by suggestion, the sleuths closed in on the truth.

There was a notable breakthrough, for example, when Deanna visited an obscure online forum for vacuum-cleaner repairs in order to trace the make and model of the yellow appliance used to suffocate the kittens. She established that it was made by Kenmore and was available only in North America.

‘Whoever made this video, we knew that we could start looking in Mexico, the United States or Canada,’ she says.

If the ‘hive mind’ was making remarkable progress, a darker side of the internet was soon evident in the form of mob justice.

One member of the Facebook group was a man called Joe Panzarella, the leader of a Long Island-based biker gang called Rescue Ink, which specialised in taking vigilante revenge on perpetrators of animal cruelty.

And when another, entirely innocent Facebook user was identified as a potential culprit, Rescue Ink somehow persuaded him to ‘confess’ with catastrophic results.

The victim was suffering from mental health problems, and as a result of the subsequent torrent of abuse directed at him, took his own life.

Deanna was appalled but, still determined to hunt down the kitten killer, helped form a breakaway group from among the more responsible Facebook investigators and redoubled her efforts.

There was another leap forward when they received an anonymous tip that the perpetrator was a man called Luka Magnotta and they embarked on the laborious process of analysing the locations featured in his Facebook pictures.

Using Google Maps, they pinpointed a block of flats where he’d been living in Toronto, for example, although, frustratingly, Magnotta had already left.

Deanna and her colleagues discovered that he had been born in Ontario and had changed his name from Eric Newman. Once a would-be model with high cheekbones and pouty lips, Magnotta had become obsessed with Hollywood, dedicating his life to pursuing stardom.

Hungry for fame, Magnotta had set up at least 70 Facebook pages and 20 websites under different names, which he used to plant rumours about himself, including that he was in a relationship with a high-profile convicted murderer.

But as the Facebook investigators closed in on their target, something else was starting to happen: Magnotta seemed to be feeding off the notoriety he was gaining. And as the focus upon him intensified, so his actions grew more extreme.

Indeed, his next move was to release two further videos of him killing kittens – one fed to a python and the other drowned in a bath while tied to the end of a pole.

Then, revelling in the attention, Magnotta apparently confirmed to those hunting him that he was indeed the killer. Now Deanna feared that he might pose a threat to people, too.

It is well known that some psychopaths kill animals before moving on to murder people, and in Deanna’s view it was a race against time to bring him to justice.

This was chillingly confirmed when Magnotta sent her a video taken as she walked through her place of work. ‘I know who you are and I know where you work,’ Magnotta tells Deanna on the clip. Her own life was at risk. 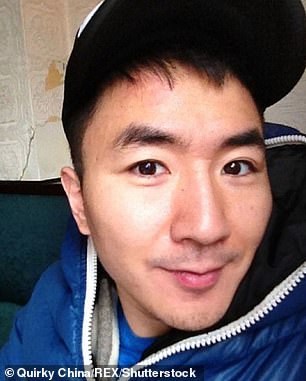 Stabbed to death: Jun Lin was attacked by Luka Magnotta with a screwdriver. ‘The more I read about Jun Lin, it hit me so hard that I’d worked 18 months to get this person stopped, and then he committed murder,’ Deanna said later

The Facebook sleuths begged Magnotta to seek help, but to no avail. They made several attempts to pass their vast cache of evidence to Canadian police but heard nothing back – until their worst fears proved correct.

In 2012, Magnotta posted a new video, entitled 1 Lunatic, 1 Ice Pick. It showed a blurred figure stabbing a naked man 100 times with a screwdriver. The killer had moved on to humans.

A torso was found in a suitcase outside Magnotta’s apartment in Montreal, along with binbags stained with blood, a dead puppy and Magnotta’s ID.

Any remaining doubts were dismissed when it turned out that Magnotta had been caught on CCTV casually disposing of the items and – such was his narcissism – checking his reflection on the way back into the building.

Viewers are told that Magnotta dismembered the corpse – although it is not clear how – and that he sent various body parts to the headquarters of Canada’s two leading political parties.

The killing of 33-year-old Jun Lin, a Chinese engineering student, had a devastating effect on Deanna. For all her efforts, she had been powerless to help.

‘The more I read about Jun Lin, it hit me so hard that I’d worked 18 months to get this person stopped, and then he committed murder,’ she said later.

Finally, Canadian police were obliged to act, sending Magnotta’s details to forces around the world, and he was apprehended in Berlin on June 4, 2012, in an internet cafe.

The owner recognised Magnotta from newspaper reports and flagged down a passing officer.

Magnotta had been looking up his own mugshot on the Interpol website at the time.

So reviled was the murderer that no airline company would fly him back to Montreal and a plane from the Royal Canadian Air Force had to be used instead.

Magnotta’s lawyers claimed he was schizophrenic but the prosecution argued that he had faked the condition and, instead, suffered borderline personality disorder.

In December 2014, he was convicted of first-degree murder and sentenced to life in prison.

Whatever the truth about his mental state, he showed little or no emotion when confronted with his crimes.

‘You see him being given a photo of Jun Lin and he doesn’t even react,’ says director Mark Lewis.

‘He was far more focused on making it clear to people that he had been a model and an actor.’

Deeply conflicted about the role they played in trying to track down Magnotta, Deanna and her group of online crusaders were initially wary about taking part in the Netflix documentary.

They were haunted that Magnotta might not have resorted to murder had they not provided the very audience he seemed to crave.

‘One of the things which keeps me up sometimes at night is, were we complicit in his crimes?’ she asks.

‘Maybe I did exactly what the killer wanted. These people don’t deserve our attention.

‘There are so many people in society loving true crime and serial killer documentaries. Every killer has fans.

‘People write to these guys in prison. It’s insane. I am guilty of that as well. I watch these documentaries. I’m in one now.’

Deanna’s campaign is far from over. Her group has launched an online organisation which seeks to alert local authorities to animal abusers and has played a role in a number of successful arrests.

In the final moments of the documentary, however, she poses a troubling question about our ever-increasing fascination with true crime.

‘You at home, watching a whole documentary about Luka Magnotta – are you complicit?’ she asks, before concluding: ‘Perhaps it’s time we turned off the machine.’