Washington today raised the prospect of starting a trade war with the UK if the British government goes ahead with plans to impose a tax on US tech giants.

US treasury Secretary Steven Mnuchin said Donald Trump will personally heap pressure on to drop the proposed levy as Sajid Javid insisted it will go ahead.

Mr Javid said the digital services tax will be introduced from April but will only be a temporary measure until an international agreement is in place on how to deal with big online companies like and Facebook.

But Mr Mnuchin was clear the White House remains ardently against the move as he also hinted retaliatory tariffs could be imposed on the UK’s car industry if the tax is rolled out.

The US and France have announced a truce over President Emmanuel Macron’s plans to introduce a similar measure after Washington responded with a threat to slap punitive tariffs on products including French cheese and wine.

But Mr Javid said the tax – a two per cent levy on the revenues of search engines, social media platforms and online marketplaces which derive value from UK users – will be introduced. 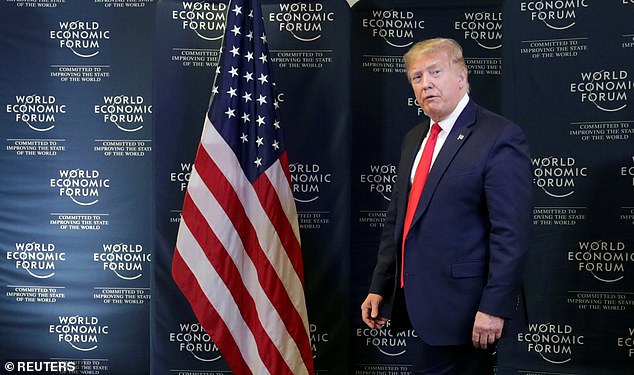 Donald Trump, pictured in Davos today, will put pressure on Boris Johnson to ditch plans to impose a tax on tech giants 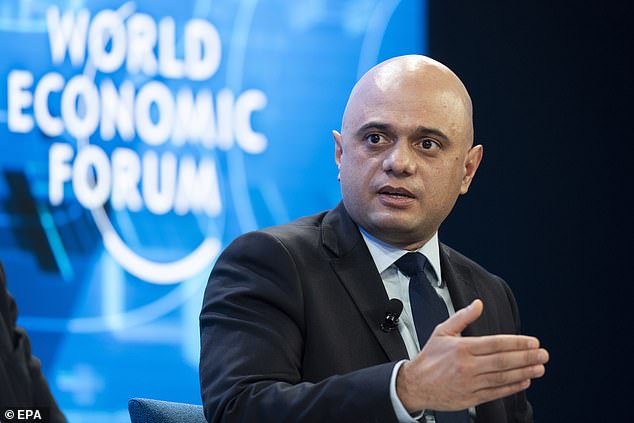 Speaking at the World Economic Forum in Davos, Switzerland, the Chancellor said: ‘We plan to go ahead with our digital services tax in April.

‘It’s important – as we said at the time when we first introduced it to Parliament and legislated for it – it is a proportionate tax.

‘It is a tax that is deliberately designed as a temporary tax, it will fall away once there is an international solution.’

The UK has been urged to hold back on pressing ahead with the levy by the Organisation for Economic Co-operation and Development (OECD), which called for time to allow the push for an international approach to succeed.

Asked whether a post-Brexit US-UK trade deal will be possible if Mr Javid presses ahead with the tax, Mr Mnuchin said ‘we will be having some private conversations about that’, adding: ‘I’m sure this will be worked out.’

Appearing alongside Mr Javid on a panel at the Swiss ski resort, Mr Mnuchin said: ‘I’m sure the president and Boris will be speaking on it as well, as the president did with Macron.’

He argued a digital tax is ‘discriminatory in nature’ and the US is participating in the OECD process to find a solution. 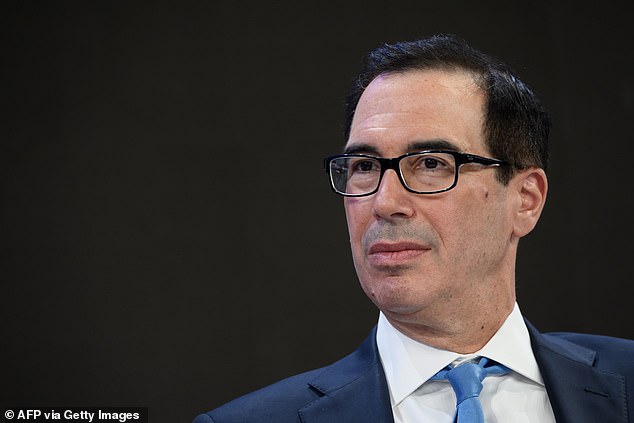 The US believes the tax is fundamentally unfair because most of the companies which it would apply to are based in North America.

But Mr Javid said there has been a growing disconnect between where customers of online firms are based and where they are taxed.

‘This does require an international solution and that is something I think we all agree on,’ he said.

While there is not an international agreement yet, ‘this could be the year of change’, the Chancellor added.

Kate Moss, 44, goes make-up free as she enjoys uncommon date along with her beau Nikolai von Bismarc...
Limited edition KitKats are selling for as much as $200 on eBay
Texas executes man convicted of strangling woman while driving after last-minute appeal is denied
ALEXANDRA SHULMAN'S NOTEBOOK: I’m sorry Helena Christensen, you ARE too old to wear that
French rail operator spends £12MILLION restoring a luxurious Orient Express train
What Queen's statement on Prince Harry and Meghan Markle meant
JANET STREET-PORTER: We've got a total bunch of clowns trying to save the country from coronavirus
When will Zoe Ball tune in to her new lover's turbulent past? A £1m pay rise and stunning new home