The formerly royal couple attended The Lion King premier on July 9 and took time out to speak with some of Hollywood’s most influential figures.

This comes just months before Meghan was hired by the company to work on a Disney project in exchange for a donation to Elephant Without Borders, a wildlife conservation and nature research charity. 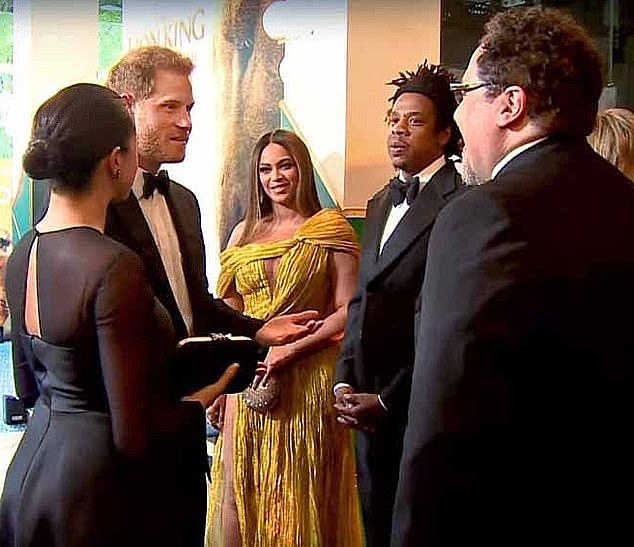 He tells Favreau: ‘If anyone needs any extra voiceover work…’ before Meghan interrupts and jokes: ‘That’s really why we’re here – it’s the pitch!’

Harry then says ‘… just not Scar’ – a reference to antagonistic Lion King character who tries to steal the kingdom from Simba. 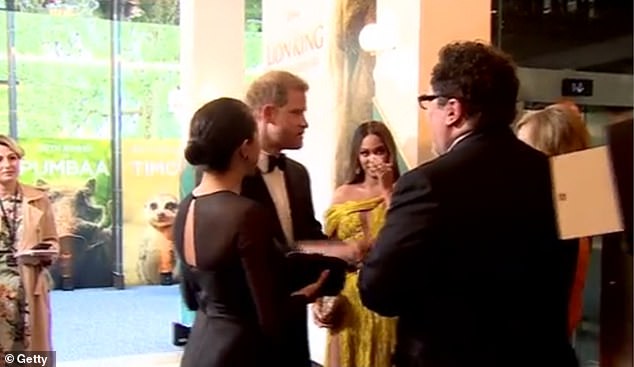 During the exchange, Beyonce is seen chucking at Harry’s joke before uncomfortably looking away.

Social media users shared their thoughts captured meeting, suggesting that Beyonce was cringing at the moment.

One woman said: ‘Look at Beyonce! She KNOWS what’s happening and she and Mr. Carter have to pretend to be nice until the Harkles get through the line.’

Social media users were quick to point out the Beyonce appeared uncomfortable during the exchange, with this person saying: ‘Look at Beyonce! She KNOWS what’s happening and she and Mr. Carter have to pretend to be nice until the Harkles get through the line’

Kaden Bentley: ‘This is painful to watch. Everyone seems so uncomfortable, especially while Meghan is speaking with Beyoncé’

One user said Beyonce, Jay Z and Disney CEO Bob Iger were ‘not having it’ with Meghan Marklee

‘But basically, Harry is asking Bob for a job for Meghan. Meghan’s pretending it’s not happening. Despite having planned that,’ she added.

‘This is painful to watch. Everyone seems so uncomfortable, especially while Meghan is speaking with Beyoncé,’ one person wrote.

‘This is so funny. Beyonce & JayZ not into Meghan!!’ one user said

‘Beyonce scratched her nose and looked as if she was embarrassed for them and then JayZ laughed at Harry’s Scar joke,’ another said.

One user said: ‘Beyonce scratched her nose and looked as if she was embarrassed for them and then JayZ laughed at Harry’s Scar joke’

During conversation, Harry asks: ‘You do know she does voiceovers?’

Iger can be heard replying: ‘Ah, I did not know that.’ Harry then responds: ‘You seem surprised. She’s really interested.’ The Disney chief then says: ‘We’d love to try. That’s a great idea.’

While Bay’s comments are unclear, it appears she asks Iger what the two husband’s were chatting about.

Iger gestures towards Harry and appears to explain the conversation, causing Bay to pull a face of exaggerated shock. 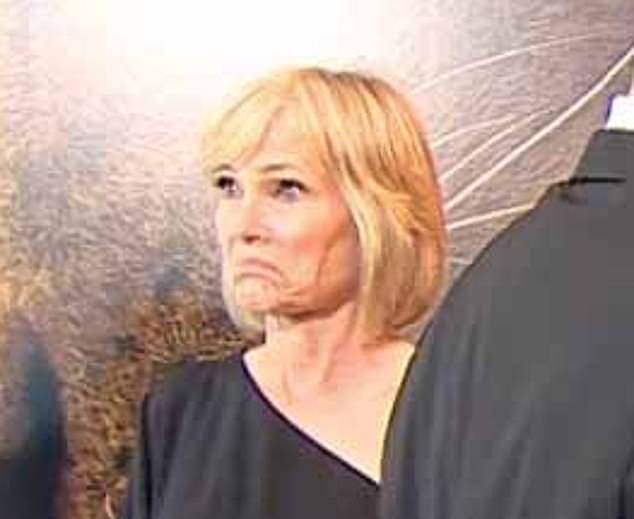 Iger, 68, gestures towards the Prince and appears to fill his wife (pictured) in on their exchange, which results in his wife pulling a surprised face

Netflix recently confirmed that it was interested in working with Prince Harry and Meghan after their bombshell announcement of leaving behind their royal duties.

Following a sensational frenzy and intense negotiations, it was revealed the couple would be giving up their HRH titles to be known as Harry, Duke of Sussex and Meghan, Duchess of Sussex going forward.

This opened the door for the couple to potentially enter into lucrative contracts with entertainment companies, including popular streaming site Netflix.

Ted Sarandos, chief content officer of Netflix, said the company is ‘interested’ in a production with the Sussexes.

‘Who wouldn’t be interested? Yes, sure,’ Sarandaos said at an event in Losa Angeles when asked about Harry and Meghan.

Meghan has retained her team of Hollywood agents and publicists, as well as reportedly being in discussion about future projects.

Prince Harry has signed on to complete a six-part series Apple TV+, which will be produced with Oprah Winfrey and focus on mental health.

Schauffele in front at BMW by 2 shots while Woods falls...
Waleed Aly demands the date of Australia Day is changed
Rugby-England show character to eke out win over South...
Father-of-three, 35, and his baby son 'were just 20 seconds from home' when they were killed
Single mother, 26, wants Conor McGregor to take a paternity test
Trump says he was 'ready' to bomb Iran but called off the strike before the planes took off
New York basks in the warm glow of summer as 'Manhattanhenge' sees people lining the city streets
Michael Douglas and Catherine Zita Jones seek to downsize