She’s been keeping busy as she fulfils her modelling duties during the international Fashion Week shows.

And looked as stylish as ever as she strutted down the runway for Alyx’s Menswear show during Paris Fashion Week Men’s in the French capital on Sunday.

The model, 23, was sure to turn heads in her androgynous chic display as she donned a biker jacket over a white shirt and a black tie. 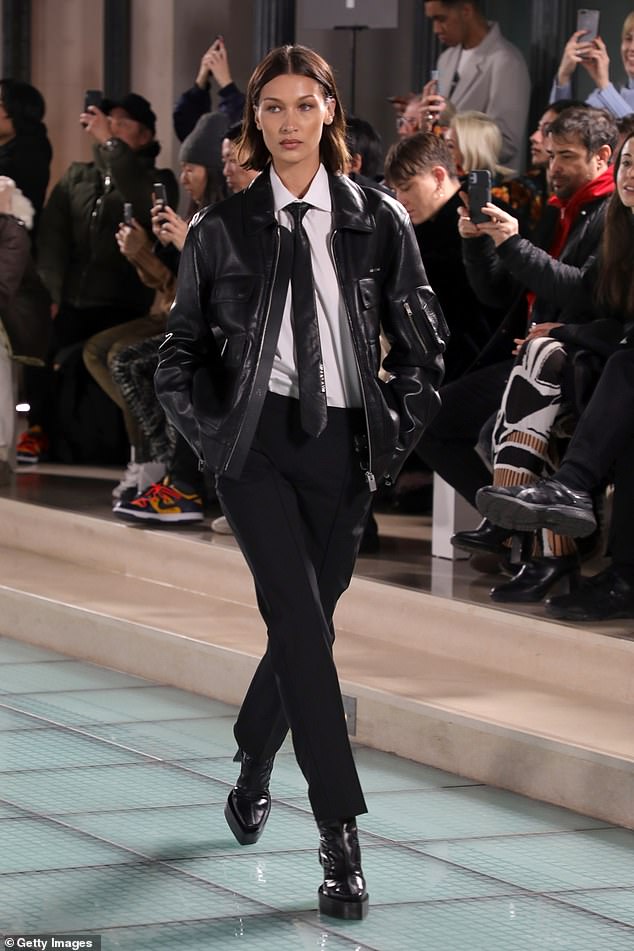 Wow! Bella Hadid put on an androgynous chic display as she strutted down the catwalk at Alyx Menswear show during Paris Fashion Week on Sunday

Bella complemented her ensemble by slipping into a pair of black trousers, while she stepped out in sleek heeled boots.

Her brunette locks were pulled back over her ears in a sleek, straight style, and she wore a natural palette of make-up for the show.

Earlier in the evening, Bella looked effortlessly chic in a monochrome ensemble that saw her team a semi-sheer white dress with a black waistcoat. 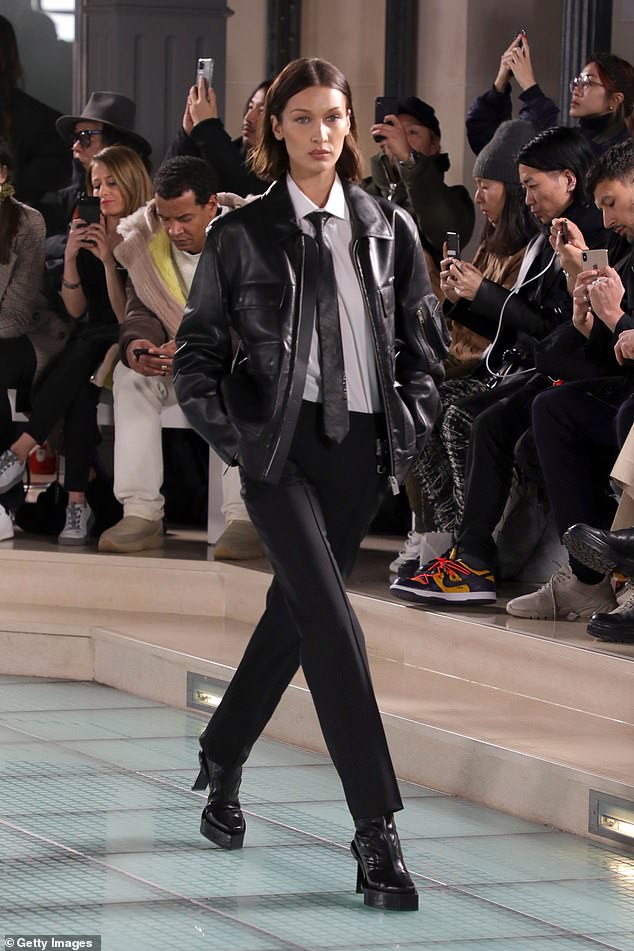 Androgynous chic: The model, 23, was sure to turn heads in her ensemble as she donned a biker jacket over a white shirt and a black tie

Stunning: Bella complemented her look by slipping into a pair of black trousers, while she stepped out in sleek heeled boots

Bella previously detailed her eating and workout routine during the international fashion weeks during an interview with Access.

The Weeknd’s former girlfriend explained: ‘You know, I tried to just start a little diet yesterday because I’ve really just been eating everything.

‘But I really love eating and it makes me happy and I love food and every day I try to start these diets and make myself healthier,’ she told the outlet.

‘I think that we’re running around so much during Fashion Week that I’m just gonna grab that sandwich or that slice of pizza. 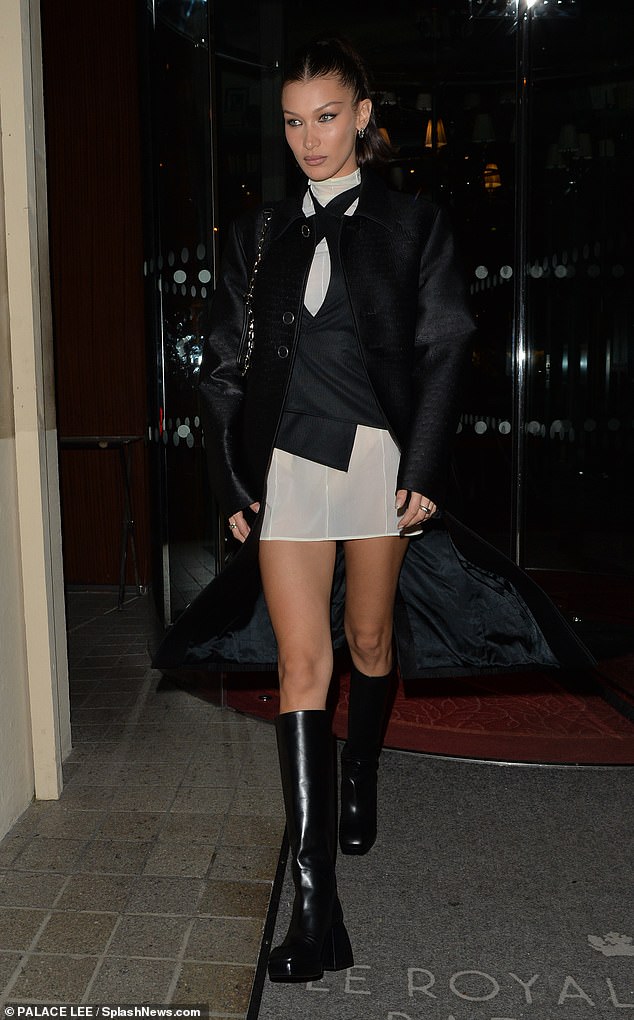 Stylish: Earlier in the evening, Bella looked effortlessly chic in a monochrome ensemble that saw her team a semi-sheer white dress with a black waistcoat

Monochrome: The model completed her look by wearing a black longline coat and matching wellington boots

‘It’s just gonna happen and I just have to deal with it. But I definitely have to keep my workout routine … keep it somewhat close. I went yesterday, maybe I’ll go tomorrow.’

In the romance department, Bella is currently single after splitting from three-time Grammy winner The Weeknd for the second time in August.

‘They hope to get back together at one point but for now are focusing on themselves and their projects,’ a source told E! News at the time.

‘[They] haven’t spent quality time together in months. They are in different places right now, physically and mentally. Bella is prepping for her fashion week commitments and Abel is working on his music and his upcoming acting debut.’ 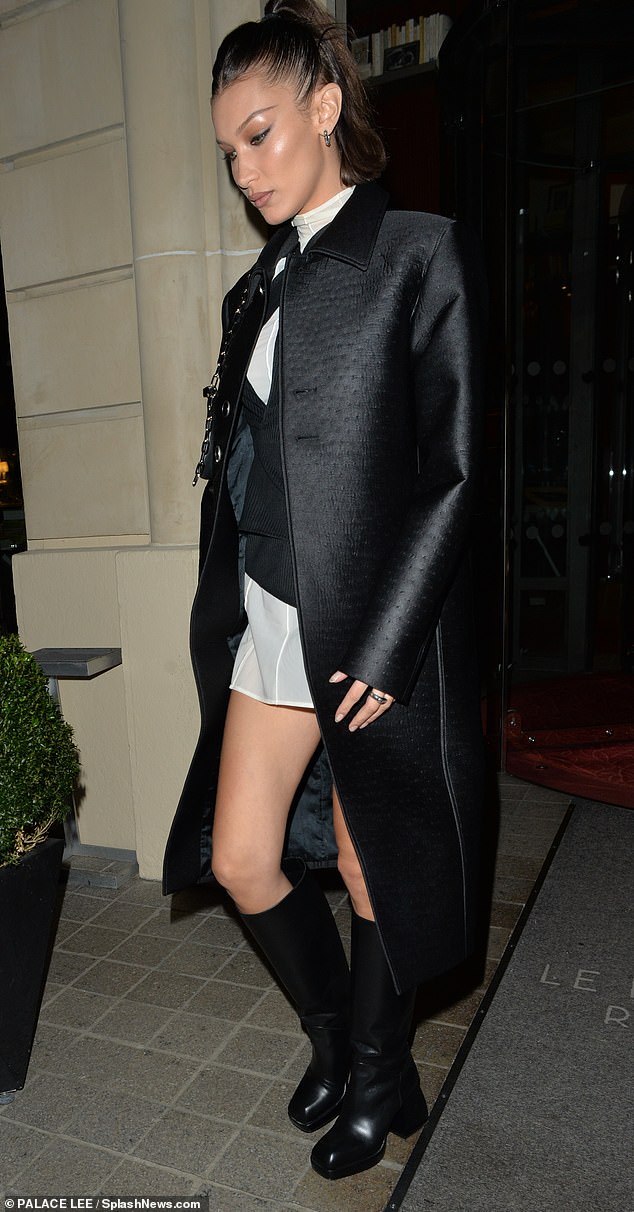 Pretty: Bella pulled her brunette locks back into a sleek ponytail that fell past her shoulders

Dressed to impress: Bella wore a glamorous palette of make-up for the occasion 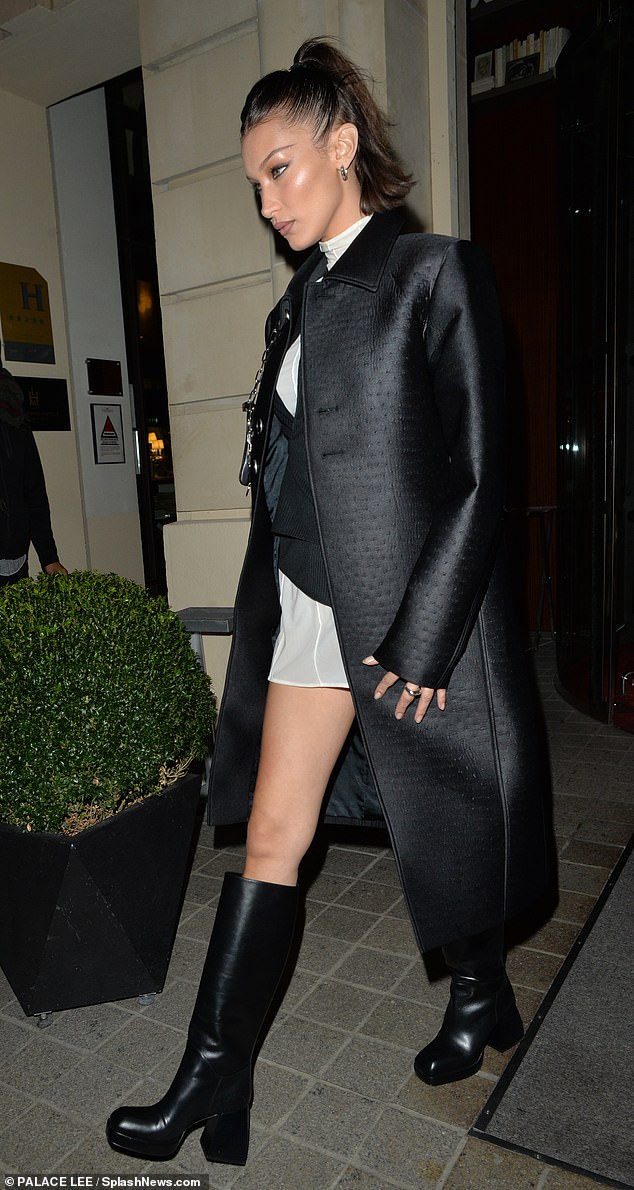 Ready to go: The model wore a stoic expression as she headed out to the runway show

Earlier this week, court officials confirmed that Bella’s sister Gigi was dismissed as a juror for Harvey Weinstein’s trial, an expected development following the attention her presence in court generated.

The former film producer, 67, is accused of raping a woman in a Manhattan hotel room in 2013 and sexually assaulting another in 2006.

Judge James Burke has said he expects a panel of 12 jurors and six alternates to be seated in time for opening statements and evidence on January 22. The judge told prospective jurors he expected the trial to finish up in early March.

In the romance department, the blonde confirmed she’s back on with former beau Zayn Malik earlier this month, a year after they officially ended their three-year on/off relationship. 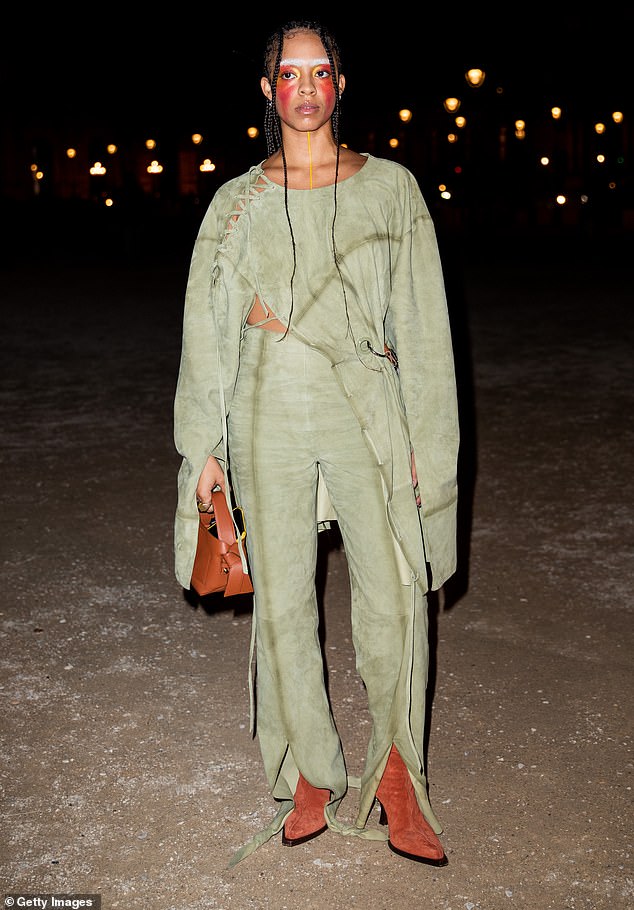 Striking: FKA Twigs was sure to turn heads as she was spotted outside of Acne in a quirky green co-ord ensemble 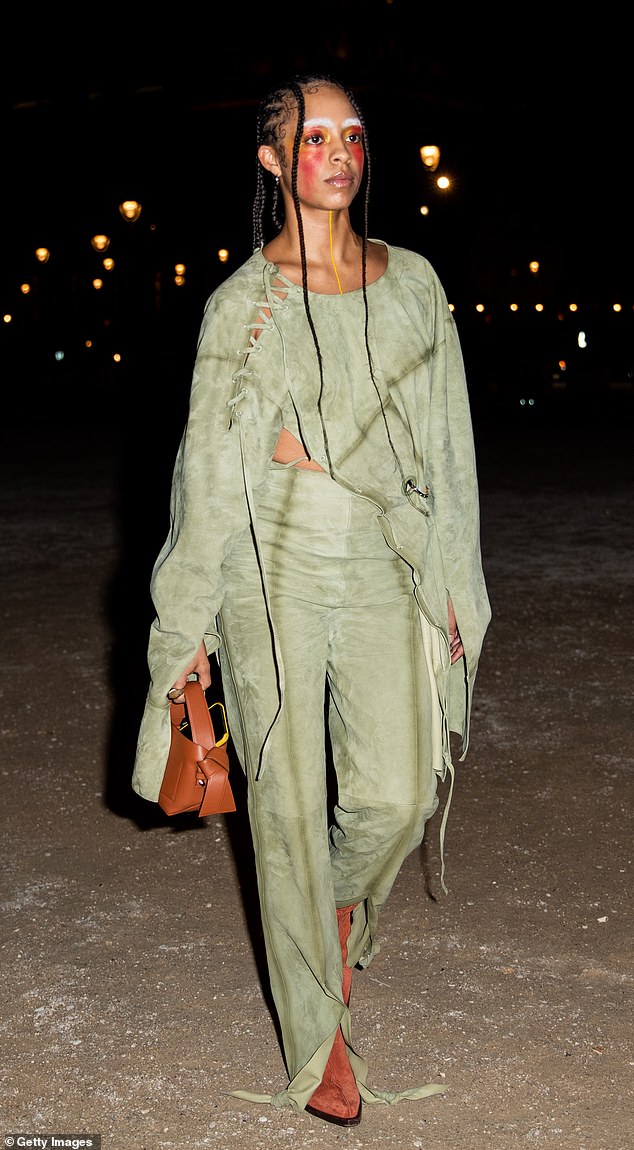 Stunning: FKA wore red and yellow paint on her face, while her eyebrows were painted white 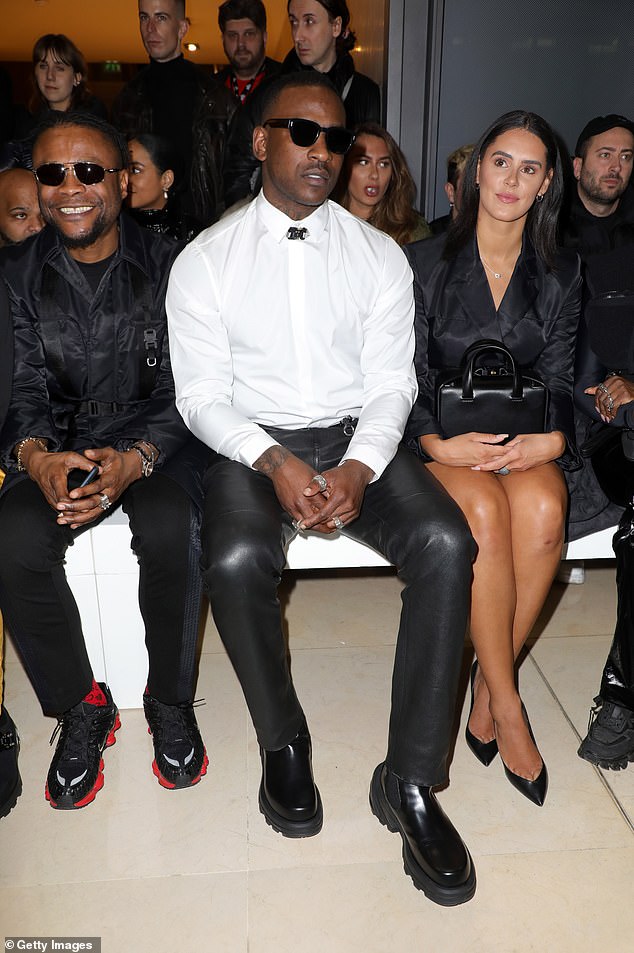 A-list guests: Skepta was seen on the FROW of the show, as he supported the brand’s showcase 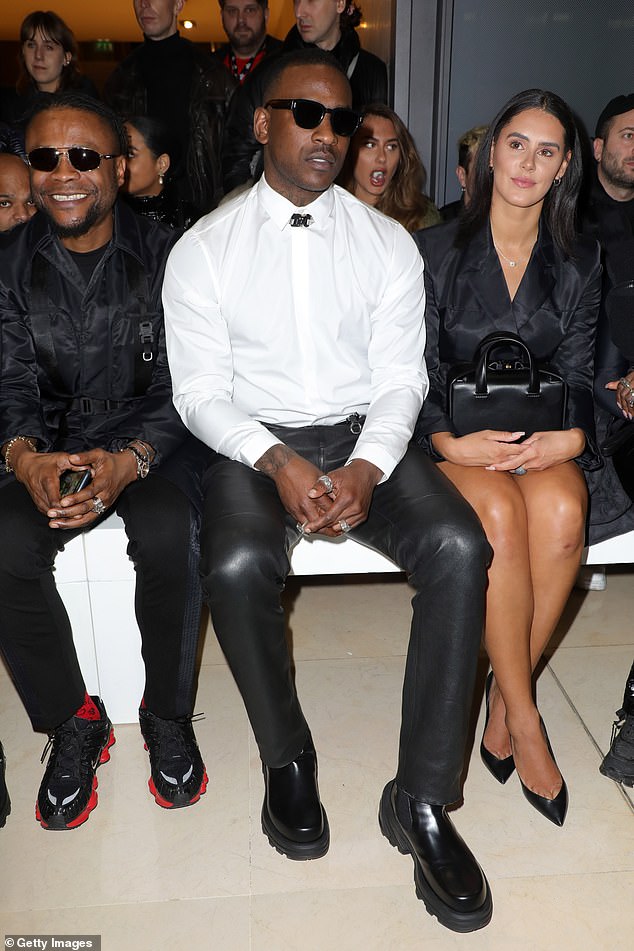 Looking sharp: The rapper was dressed to impress in a white shirt and PVC style trousers