wore very little in  which was released earlier this week.

But on Friday the 34-year-old model was bundled up while on a stroll with daughter, Lea, aged two, in New York.

This is the first time the cover girl has been seen since photos surfaced of her ex-partner Bradley Cooper chatting up actress Ana de Armas. 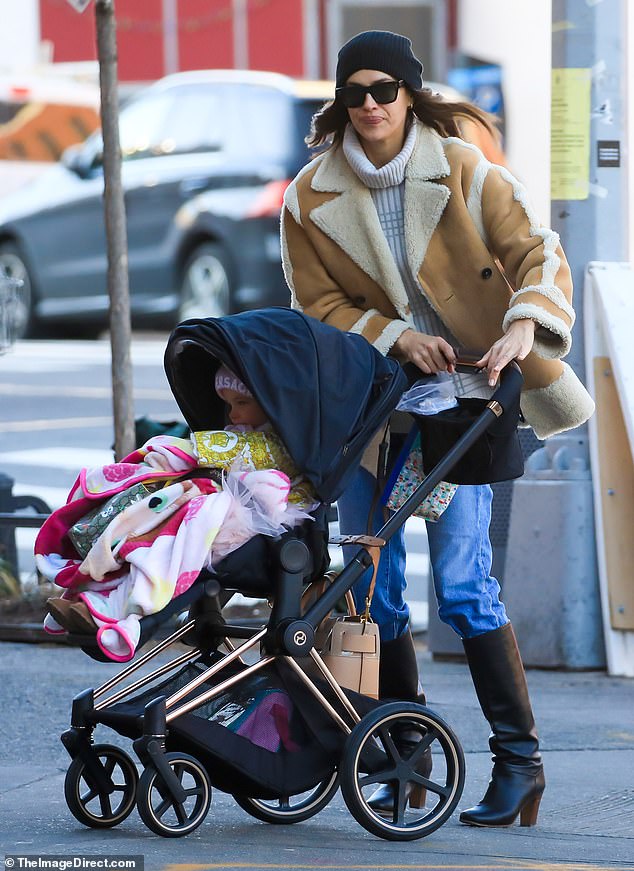 Bundled beauty: Irina Shayk was spotted bundled up while out on a chilly morning stroll with daughter Lea in New York on Friday 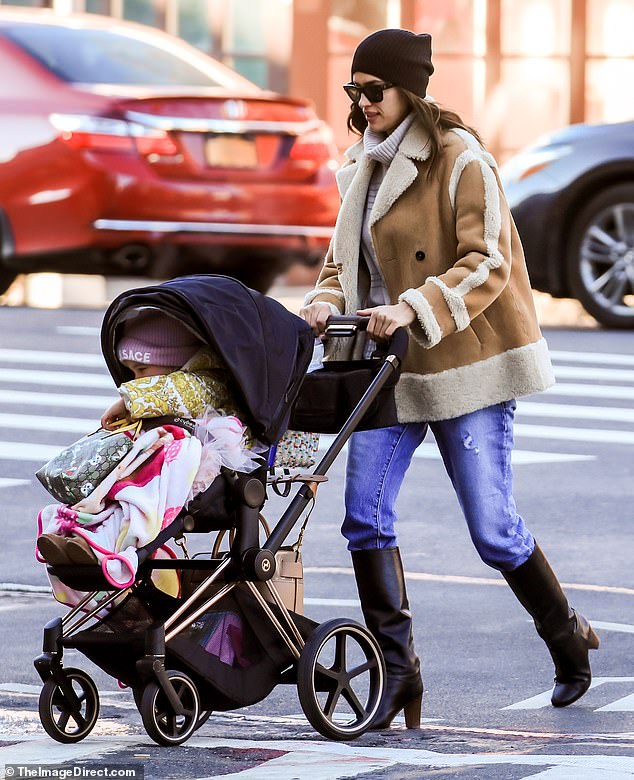 Mom and me: The supermodel made sure her 2-year-old was fit for the weather in a Versace coat and light pink Versace beanie

Keep cosy like Irina in a sheepskin coat by Paul & Joe

Struggling to cope with the winter chill AND staying stylish? Then why not take style cues from Irina Shayk in this cosy coat by Paul & Joe.

This pea coat is the perfect oversized piece to throw on this season over everything from jeans and dresses.

Cut from a tan suede, the jacket is trimmed with classic sheepskin trim and is also lined with the soft fur so it’ll definitely keep you toasty!

If you want to copy Irina and have the cash to splash then shop your size now via the link to your right. It’s currently in the saler for £882.50!

But if the price tag is a bit OTT then check out the high-street alternatives we’re rounded up below from Asos, Dorothy Perkins, Velvet and more.

The supermodel mom may have braved the morning’s frigid temperature, but not without the proper attire.

She donned a color-blocked sheepskin jacket layered over a thick, beige turtleneck.  Irina slipped her feet into a pair of brown knee-high, heeled boots that managed to covered up a majority of her medium wash denim jeans.

Her signature dark brown tresses cascaded down her back from the bottom of her black beanie.

The model appeared makeup free behind her pair of large, black sunglasses.

Lea, clearly not a big fan of the chill, donned a patterned Versace coat paired with a light pink beanie of the same brand. 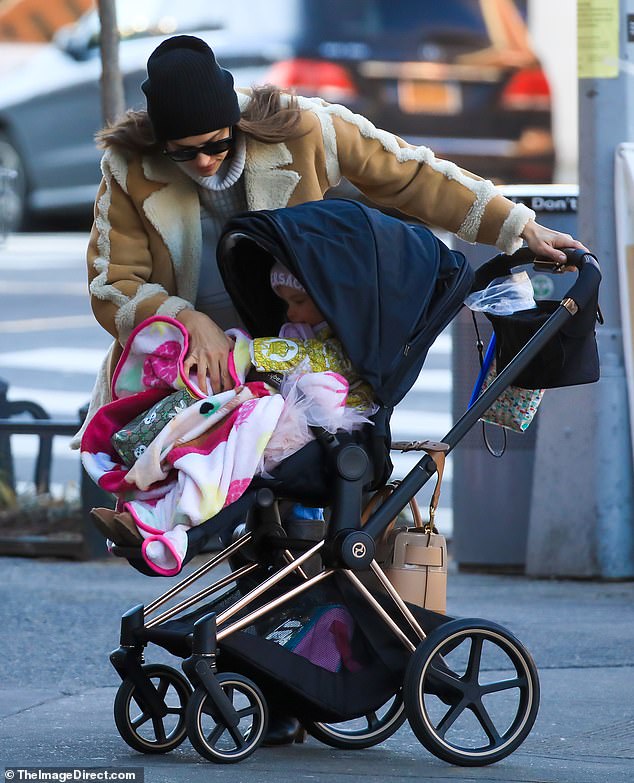 Just checking: Irina took the time to adjust Lea’s blanket so that she could achieve maximum warmth while in her stroller

Her tiny hand held onto her child sized Gucci purse, while the rest of her body resided warmly under a pink patterned blanket.

The 2-year-old remained in her stroller, as her supermodel mom made sure her blanket remained perfectly placed around her pint-sized frame.

Shayk, who shares Lea with actor ex Bradley Cooper, has been an openly single lady since June of 2019 when her and Cooper parted ways after dating since 2015.

But, Cooper appears to have set his sights on someone new.

Earlier in the month, the A Star Is Born director rubbed elbows with some of Hollywood’s biggest names, while attending the AFI luncheon in Beverly Hills. 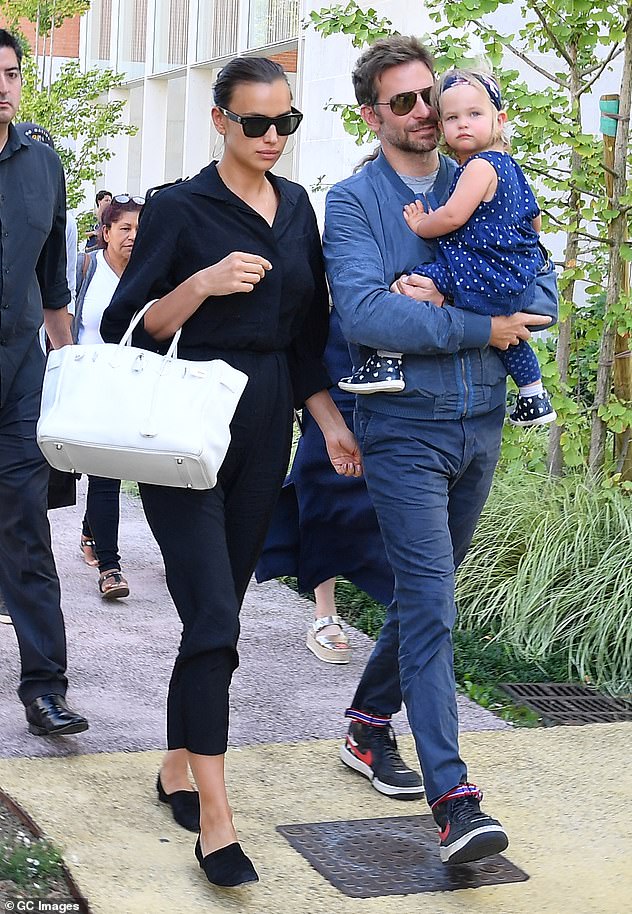 Fractured family: In 2018, the couple were spotted during happier times while enjoying the 75th Annual Venice Film Festival with daughter Lea

Cuban beauty, Ana de Armas, was spotted enjoying a lengthy chat with the famous bachelor during the luncheon.

‘Bradley made a beeline for Ana and they chatted away for quite a while in the hotel lobby. They weren’t at all keen to rush off,’ an insider shared with of the encounter.

In pictures, obtained exclusively by , Armas and Cooper can be seen engaging in conversation, while beaming in the other’s direction.

The star of The Hangover appeared to be thoroughly charming Ana during the conversation, with the No Time To Die actress laughing at his every joke.

But this isn’t the pair’s first interaction. 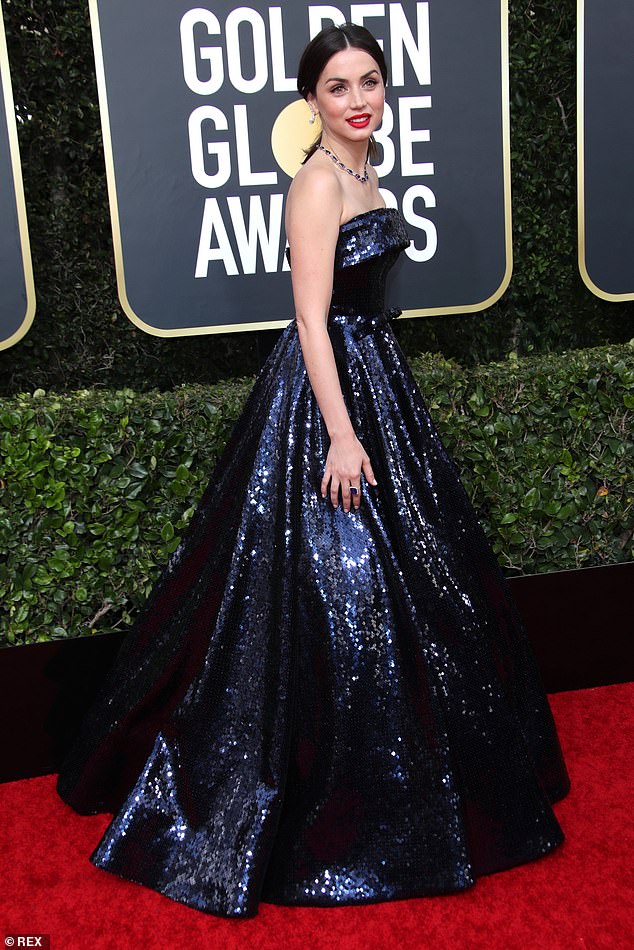 New gal: Bradley was spotted chatting it up with Knives Out actress Ana de Armas at the AFI luncheon earlier this month; de Armas was photographed here on the red carpet at the Golden Globes on January 5th

They both starred alongside one another in the 2016 film War Dogs.

The 31-year-old could be Cooper’s perfect match, being that she’s no stranger to failed romances.

de Armas divorced her longtime partner, Spanish actor Marc Clotet, in 2013, and is very much available.

Kaia Gerber walks for Anna Sui and Proenza Schouler at NYFW
Amy Adams looks patriotic in ruby red dress with chic keyhole as she attends Vice premiere in Paris
Jennifer Lopez rocks pink crop top and tight leggings at the gym with Alex Rodriguez and Ryan Lochte
MAFS' Mick Gould is invited to Jules and Cameron's engagement party and says he needs a 'plus one'
So can YOU pick the wax work from the real thing? Kris Jenner poses with Madame Tussauds look-alike
Vogue Williams and Spencer Matthews enjoy sun-soaked trip to the South of France with son Theodore
'GC gardening services!' Gemma Collins mows the lawn in a glamorous kimono and sunglasses
I'm A Celebrity contestants 'WON'T stay in £1k a night Palazzo Versace hotel after leaving the camp'