Thailand has announced a second case of the new Chinese coronavirus that has killed two people.

The Chinese woman, 74, had been quarantined since her arrival on Monday and the virus was detected with tests, Sukhum Karnchanapimai, permanent secretary of the Public Health Ministry said.

She was from the Chinese city of Wuhan, where 41 cases of ‘unexplained pneumonia’ have been linked to the new type of coronavirus.

Two patients have died, the second of which was announced yesterday. Both patients were in their 60s.

Thais have been urged to remain calm as the country ramped up checks of Chinese tourists ahead of the Lunar New Year’s holidays.

It’s the third time a case has been detected outside of China, with another being in Japan. Officials said there was no fear of outbreak in the country 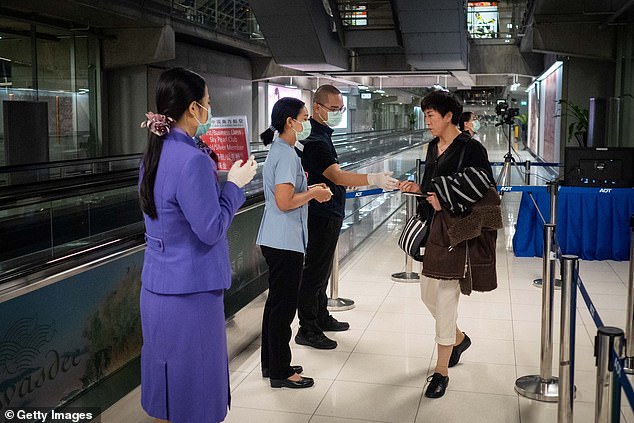 The Chinese woman, 74, was from the Chinese city of Wuhan, where 41 cases of ‘unexplained pneumonia’ have been linked to the new type of coronavirus

Coronaviruses are a large family of viruses that can cause infections ranging from the common cold to severe acute respiratory syndrome (SARS).

On Monday, Thailand said it had found a 61-year-old Chinese woman carrying a strain of the coronavirus, the first time it was detected outside of China.

Since then, Japan reported its first case of the infection on Thursday after a Japanese man returned from visiting Wuhan.

The World Health Organization (WHO) has said the Wuhan virus could spread and has warned hospitals worldwide.

Thailand is on high alert ahead of the Lunar New Year holidays next week, when nearly a million Chinese visitors are expected to arrive.

It has screened 13,624 passengers across the airports since Jan. 3. (Reporting by Panarat Thepgumpanat; Writing by Patpicha Tanakasempipat. Editing by Gerry Doyle)

TRUMP TELLS CAROLINA FLOOD VICTIM: 'AT LEAST YOU GOT A NICE BOAT OUT OF THE DEAL'
Father-of-two, 44, is fined for using his drone over Winter Wonderland
Israel's army is ready to launch a ground invasion into Gaza after militants fired 450 rockets
Epstein's death was posted online before it was officially announced
Fears Iran's president threatening Lockerbie-type bombing
Police launch murder investigation after man is stabbed to death at East Croydon station
Coronavirus Spain: Marbella sees first cases in 11 days
Bruno Bouchet sparks heated debate with his controversial ranking of popular cheeses