Tiffany & Company moved millions of dollars worth of sparkling diamond jewelry from its landmark Fifth Avenue flagship store on Sunday for renovations, in a meticulously planned relocation to keep the baubles safe.

The jewelry was moved as the iconic 10-story Manhattan store will undergo a massive renovation over the next two years.

Though the company had to move the glittering goods just 50 feet or so to the nearby East 57th Street location subleased from Nike, it was a high-security and thorough operation.

Thirty security officers were on site on Sunday to watch 114,179 ‘units of merchandise’, a unit being one item of jewelry such as a ring or necklace, be removed from their display cases and shuttled to the new store, according to the .

Some of the merchandise moved included $4,000 rings that spell the word ‘love’ in minuscule diamonds, $165,000 diamond necklaces, and a $2.475million engagement ring that weighs as much as a bullet. 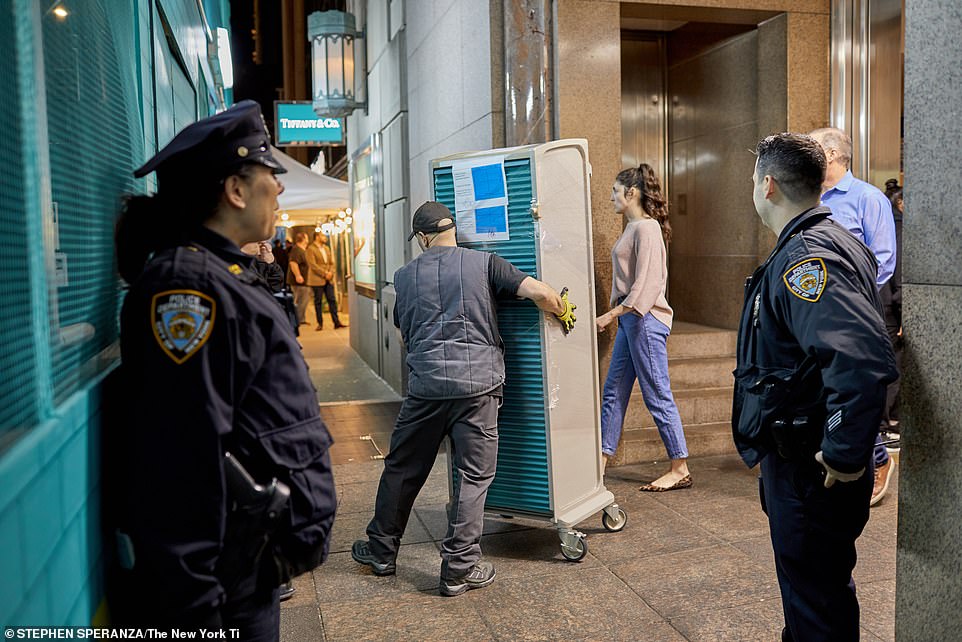 Tiffany & Company moved millions of dollars worth of sparkling diamond jewelry from its landmark Fifth Avenue New York flagship store on Sunday to its new temporary location. About 30 security officers and cops were on the scene to watch over the move and stop passerby as the jewelry was shuttled in carts on the street 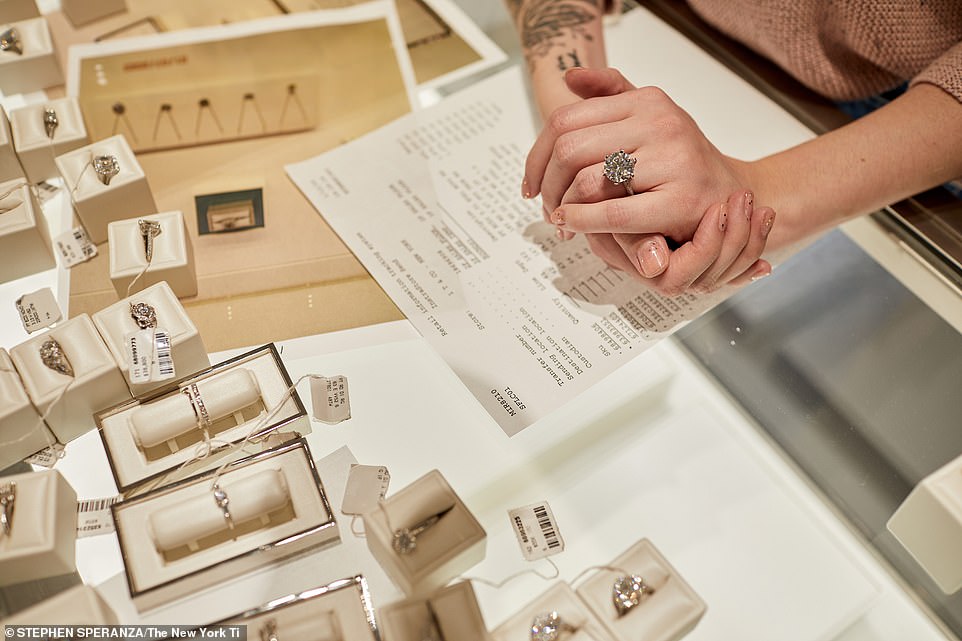 Some of the merchandise moved included $4,000 rings that spell the word ‘love’ in minuscule diamonds, $165,000 diamond necklaces, and a $2.475million engagement ring (pictured) that weighs as much as a bullet 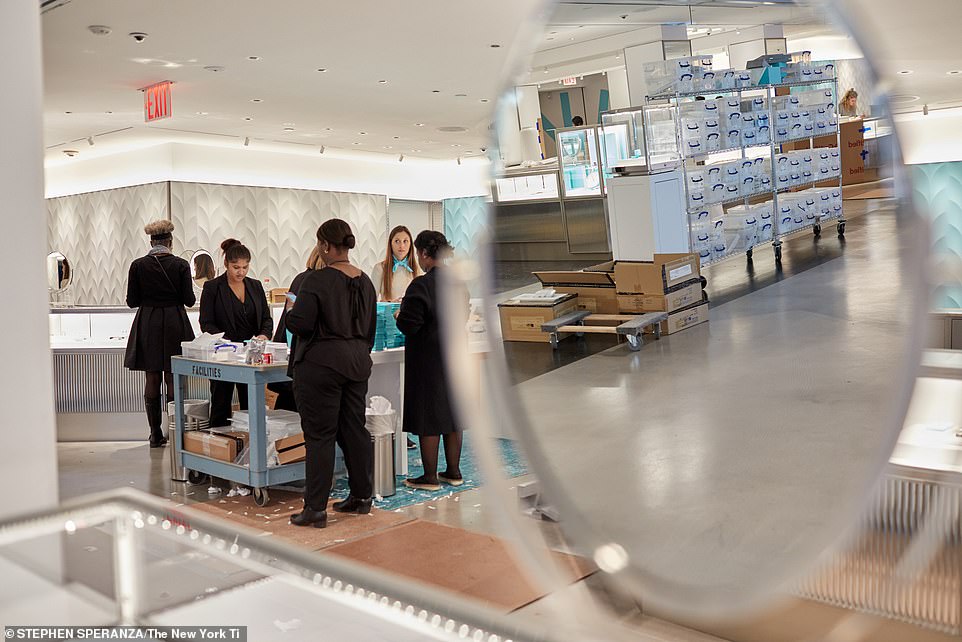 114,179 pieces of jewelry were moved from the Fifth Avenue store about 50 feet or so to the new location at 6 East 57th Street as the original location undergoes renovations. Employees pictured unpacking boxes at the new Tiffany’s location on Sunday 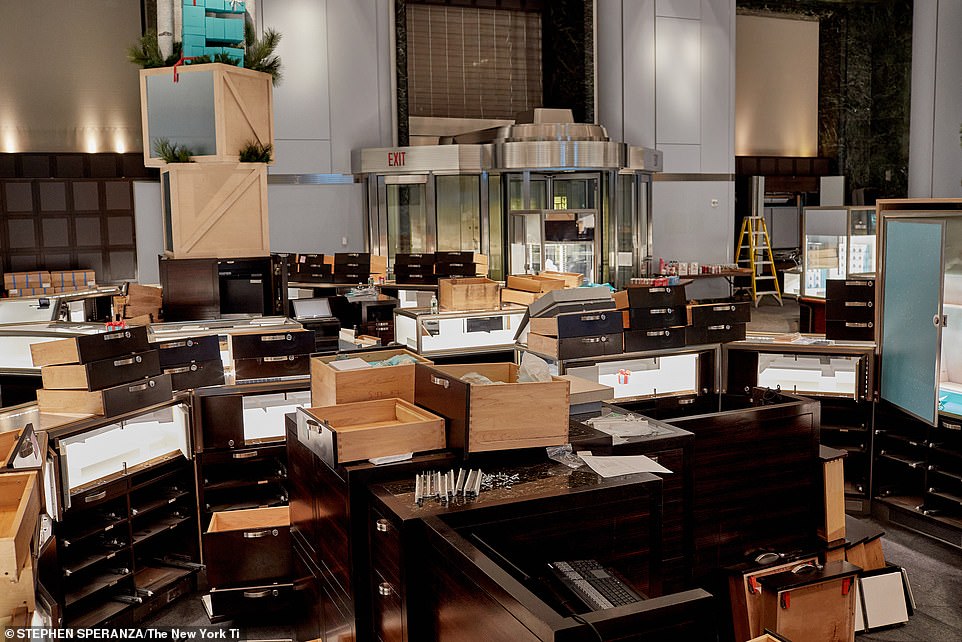 New York City police officers stood guard outside as employees shuttled the jewelry out onto the sidewalk in robin egg-blue carts, stopping passerby as the carts were moved.

The merchandise on those carts were locked up and had their security checked and rechecked before each cart was sealed in plastic shrink wrap then rolled out onto the street.

Tiffany employee Shifra Balancio stood guard at the door of the new temporary Tiffany location, keeping a log of each cart that arrived.

In both the flagship Tiffany store and the new location about 300 cameras were monitoring the transfer. Some cameras were fixated on the route along the sidewalk, sending a live feed to security officials located in the two stores and at a Tiffany’s distribution center in Parsippany, New Jersey.

Tiffany urged all its employees to remain silent about the move so that it could be executed with minimal attention.

Andrew Mikulskis, a Tiffany executive, oversaw the renovation briefed employees after the store closed on Sunday, reminding them not to post any messages or photos on social media or offer any clues about the move. 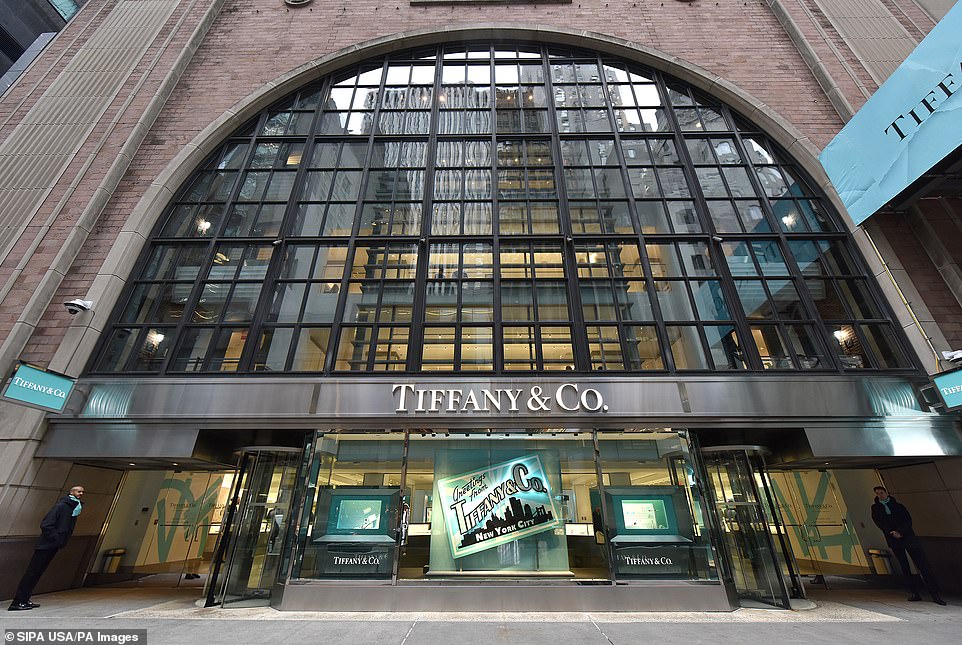 Despite the hectic Sunday move, Tiffany & Co still opened its temporary store at 6 East 57th Street on Monday as the Fifth Avenue flagship store undergoes renovation for the next two years 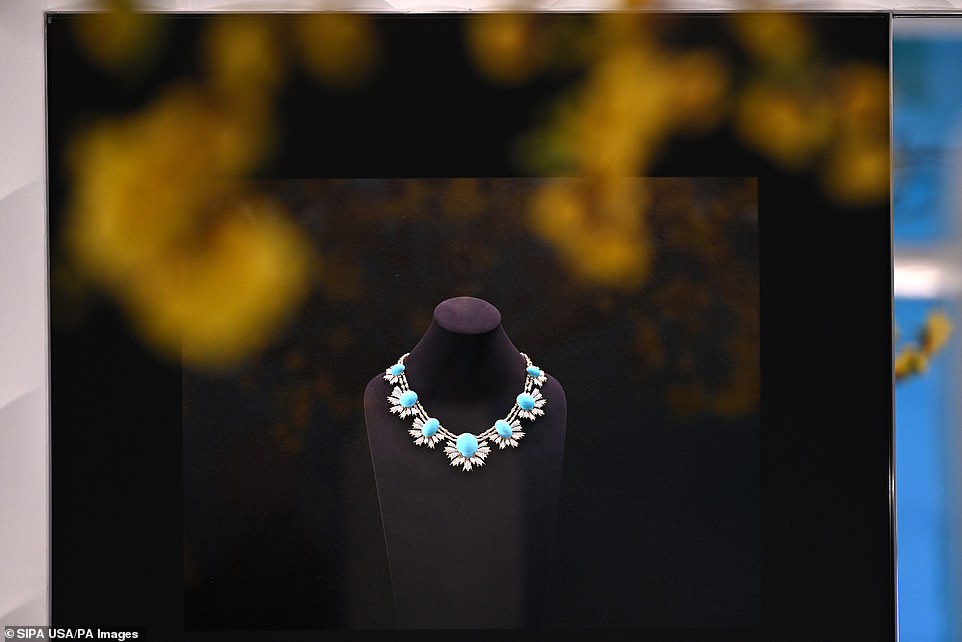 A display case at the new Tiffany store pictured above 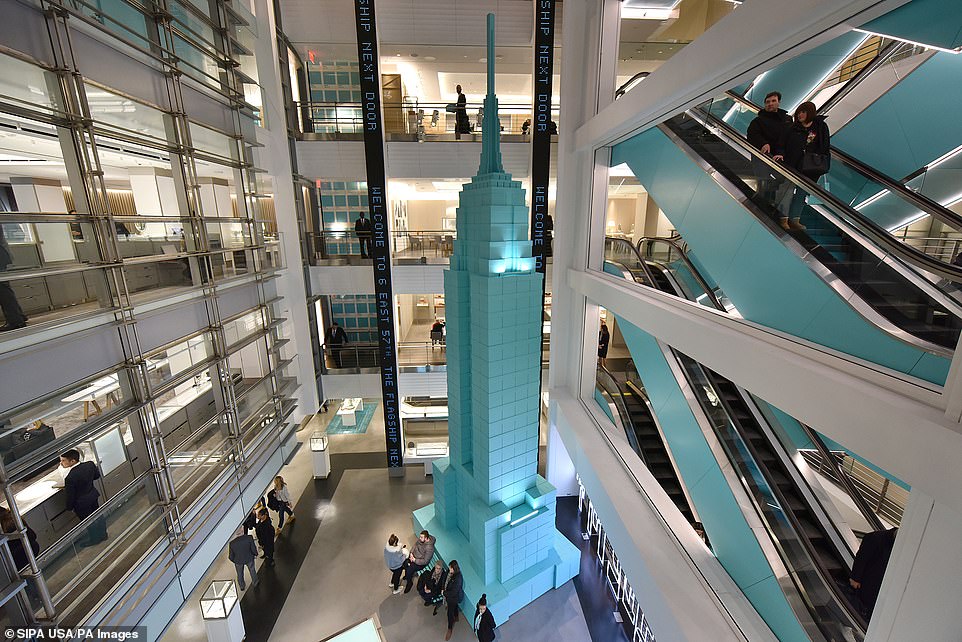 Tiffany even tracked their social media looking for hints of potential criminality.

The company hired a company that tracks social media and checked for key words like ‘move’, the old store address ‘727 Fifth Avenue’ and the new location ‘6 East 57th Street’.

To draw minimal attention from passerby in the street Tiffany set up a tent in front of the door of the temporary store to block the view.

Finally, once all the carts were shuttled into the new location, every item was entered into an inventory-control system and unpacked.

The move went smoothly without a hitch. On Monday Tiffany said nothing was lost or stolen during the Sunday move and all the jewelry from the move is safe and accounted for.

The entire operation went down in 18 hours and the new temporary store was open for business for the first time on Monday.

‘They say moving is stressful and I’ve been anxious for the last two or three weeks,’ Michael Vanderheyden, who has sold jewelry on the main floor of Tiffany’s for 35 years said during the packing process.

Tiffany doubled down in its security for this short move, learning a sore lesson from the mistakes of the past.

In 1958 two men sledgehammered the Fifth Avenue supposedly shatterproof display windows in the middle of the night and stole two diamond necklaces, a diamond pin and a diamond ring. Then they walked to their getaway car on Fifth Avenue and drove away. The jewelry was never seen again.

Tiffany’s new space located on East 57th Street does not house the famous Tiffany diamond, a 128.54-carat dreadnought that Lady Gaga wore to the Academy Awards last year. Tiffany said it is in a vault at another location.