Dina Lohan has been seen for the first time since being arrested outside a New York steak house after an alleged hit-and-run over the weekend.

Lohan, 57, was charged with DWI – her second arrest for the same offense.

In new images, she is seen on Tuesday meeting with an unidentified man where she hands over an old dirt bike outside her home in Long Island. 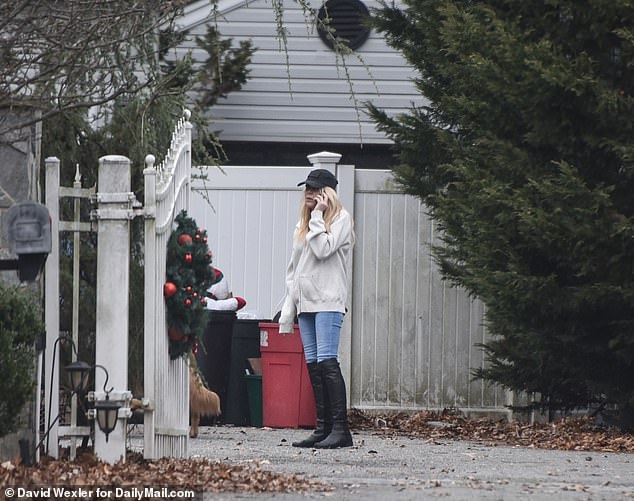 Linsey Lohan’s mom, Dina, emerges for the first time since her DWI arrest this past weekend outside her home on New York’s Long Island . A dog is also seen and her holiday decorations are still up. Dina is in a low-profile ball cap, oversize grey hoodie, jeans and long black boots 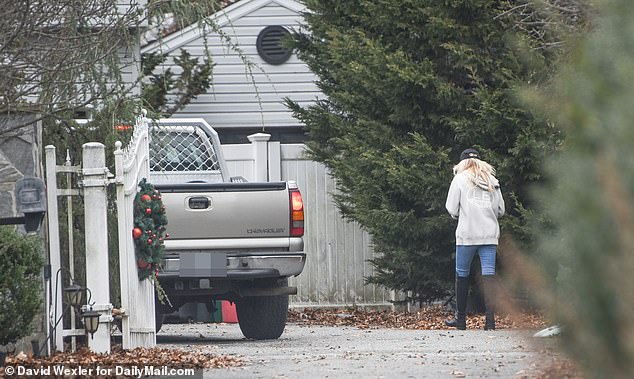 A pickup truck is seen arriving at the home, located in Merrick, New York 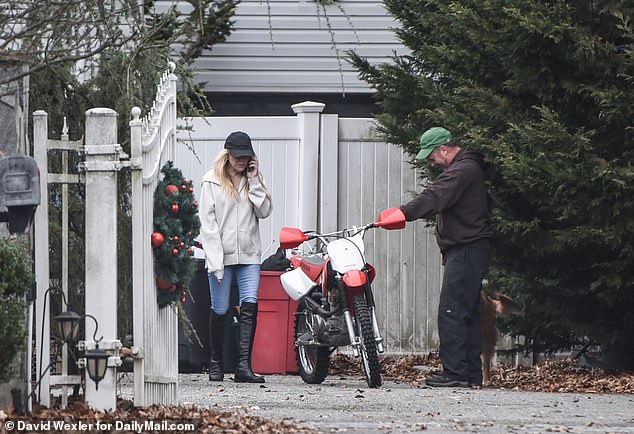 Dina meets with an unidentified man who inspects the bike. Both are joined by the friendly dog, possibly a Golden Retriever 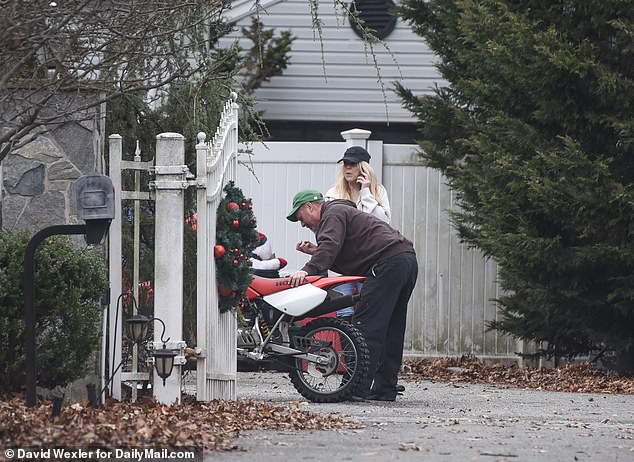 In the images, Dina, 57, emerges from her home in Merrick, New York, to pass an old dirt bike to an unidentified man 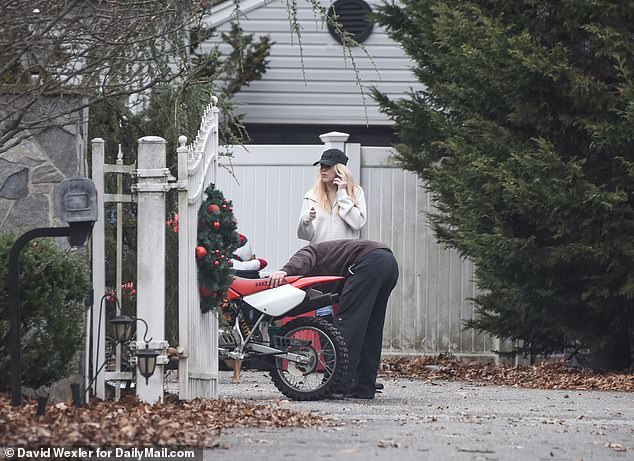 The man is seen inspecting the bike while Dina, for the most part, is on her cell phone

She spends almost the entire time on the cell phone while she meets with the man.

He is seen in inspecting the bike, and both are briefly joined by a dog, possibly a Golden Retriever. Dina does not appear to engage with the man, however at one point she does seem to be yelling at someone in the distance.

Dina on Saturday was alleged to have been involved in a hit-and-run accident with another vehicle. 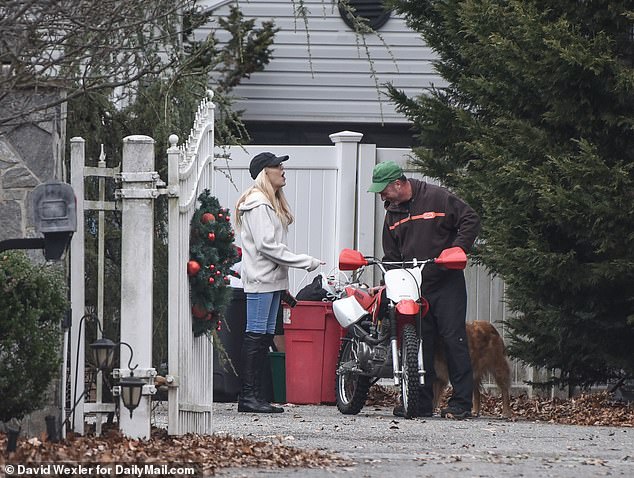 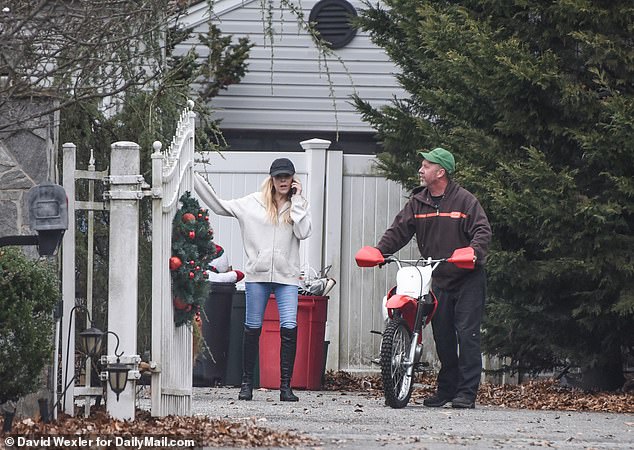 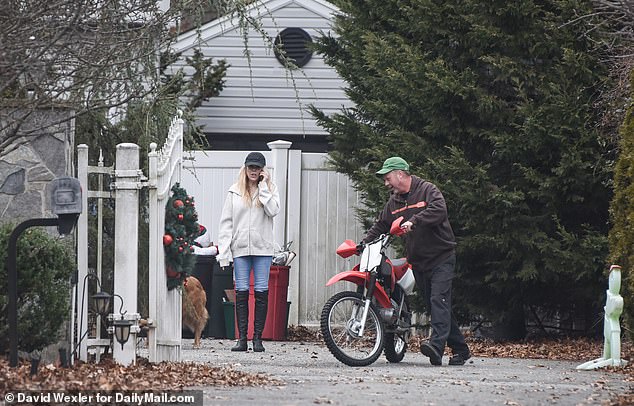 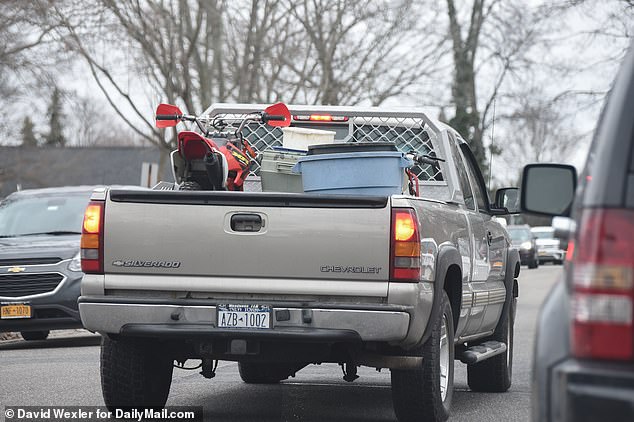 The bike is seen in the back of a Chevrolet Silverado, along plastic containers and what appears to be a bicycle

Dina allegedly clipped a vehicle before fleeing the scene, prompting the driver of the car to chase her to her house. Authorities said Dina, who was driving a 2016 Mercedes, was taken into custody after refusing to take a breathalyzer test.

The Nassau County Police Department confirmed to DailyMail.com that Dina had been arrested for DWI and was transferred to court on Sunday morning.

Police also said she cursed at the department’s officers during the arrest.

She made an initial appearance in court in Hempstead on Sunday on charges of DWI, aggravated unlicensed operation of a motor vehicle, leaving the scene of an accident with property damage and driving an uninspected vehicle.

Dina entered a plea of not guilty, and is expected back in court Wednesday.

In September 2013, Dina was arrested for drunk driving after being pulled over for driving 77mph in a 55mph zone. 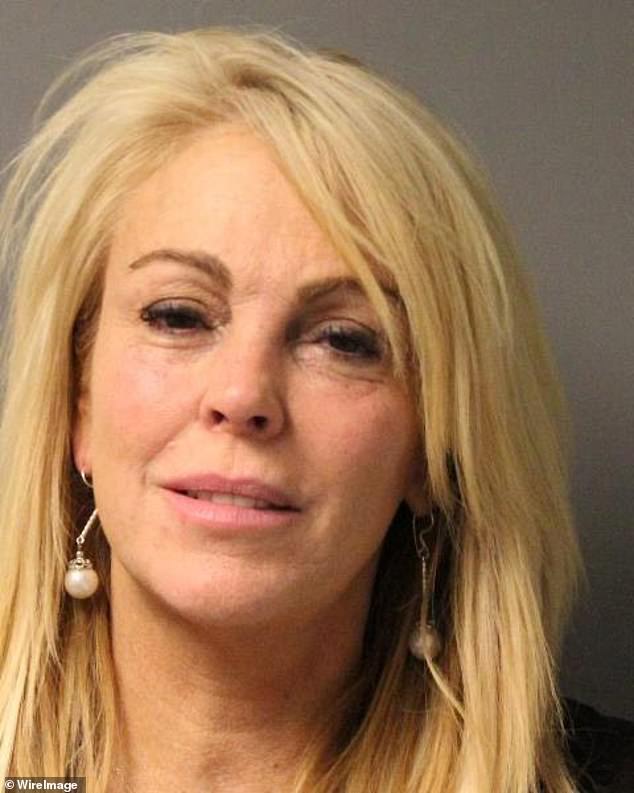 In September 2013, Dina was arrested for drunk driving after being pulled over for driving 77mph in a 55mph zone. She is pictured in this handout photo provided by the New York State Police at the time 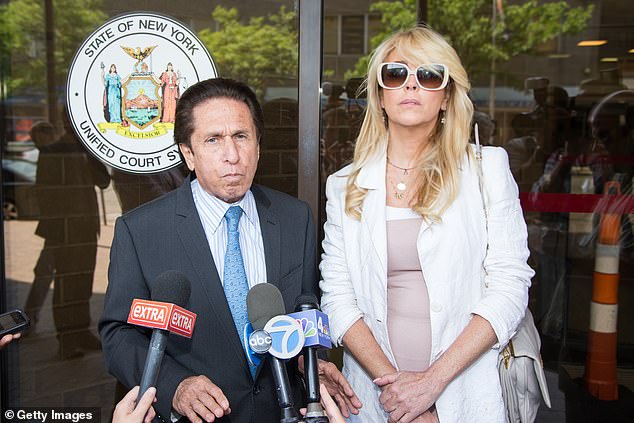 At the time, TMZ claimed that her blood alcohol level was found to be .2, which is more than twice the legal limit of .08.

‘Lohan made an allegation that she was injured during the course of the arrest,’ police officials said in a statement.

However the reality star ‘recanted her claim’ when medics arrived at the scene and ascertained that she was fine.

Dina was taken to a police station nearby and charged with two counts of driving while intoxicated and one count of speeding.

Lindsay has also been arrested several times, including twice for DUI. 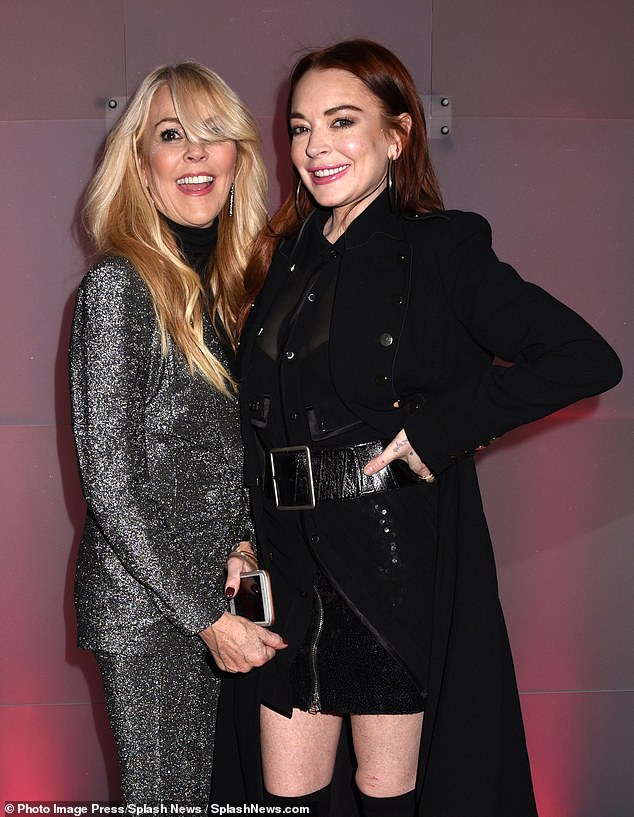 Dina and Lindsay Lohan pictured during New Year’s Eve festivities at the Marriott Marquis in New York on December 31, 2018 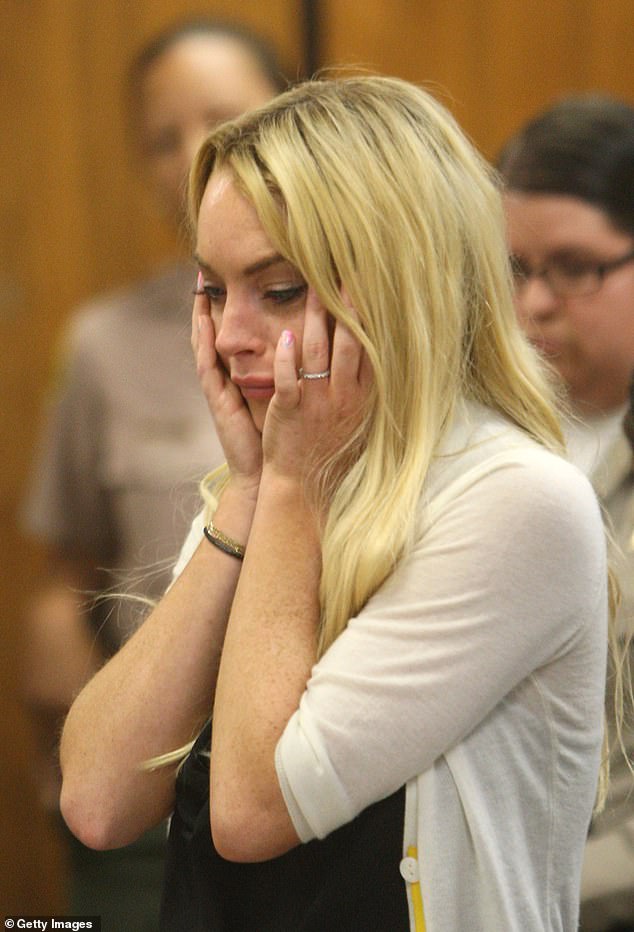 Lindsay has also been arrested several times, including twice for DUI. She is pictured attending a probation revocation hearing at the Beverly Hills Courthouse on July 6, 2010

A string of run-ins with the law and struggles with addiction cut short her movie career that began with her starring role in Disney’s 1998 remake of The Parent Trap.

In order to escape the media attention, she decamped to London where she made her West End stage debut in September 2014 in a production of David Mamet’s Speed The Plow.

By 2016, she was spending time in Greece where she had a share in a nightclub in Athens and was briefly engaged to Russian playboy Egor Tarabasov.

Earlier this month, Lindsay, who is a New York native, vowed to return to the US to start making movies again.

She revealed on CNN’s New Year’s Eve telecast from Times Square that she’s determined to reclaim ‘the life I’ve worked so hard for’.