A free-swinging Donald Trump delivered a greatest-hits rally in Milwaukee on Tuesday, riffing on impeachment, Iran, his impending China trade deal and the shrinking ranks of Democrats who want to replace him.

Donald Trump decided to focused the beginning of his second reelection campaign rally of 2020 on taking out Iranian General Qassem Soleimani – insisting Democrats don’t give him credit for taking out the terrorist leader.

While talking about how there are people missing limbs because they were victims of roadside bombings Trump said was coordinated by Soleimani he called the Iranian military leader a ‘son of a b****.’

Trump held his second reelection campaign rally of the year in the rust-belt swing state of Wisconsin as impeachment took center stage back in Washington D.C.

The rally comes after a day riddled with impeachment news as Majority Leader Mitch McConnell announced Tuesday afternoon that the Senate would begin the impeachment trial next week just hours after Speaker Nancy Pelosi said the House would vote Wednesday to transmit the two articles to the upper chamber. 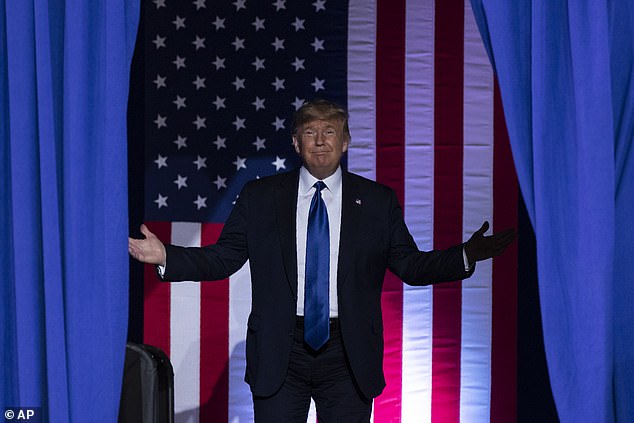 Donald Trump focused his campaign rally remarks on taking out Qassem Soleimani instead of giving attention to impeachment, which dominated the news cycle in Washington, D.C. all day Tuesday 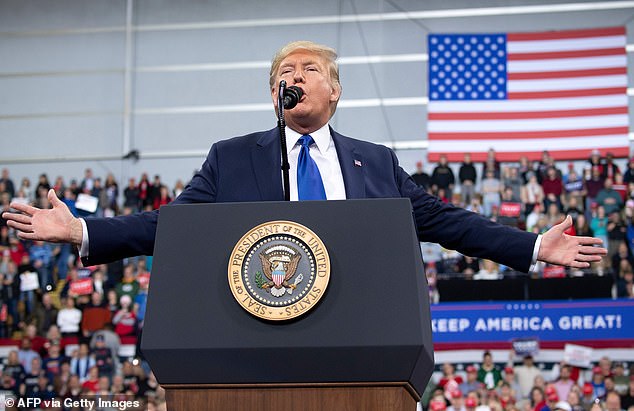 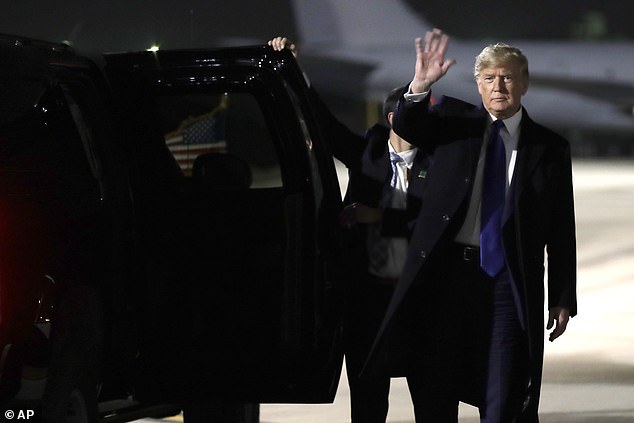 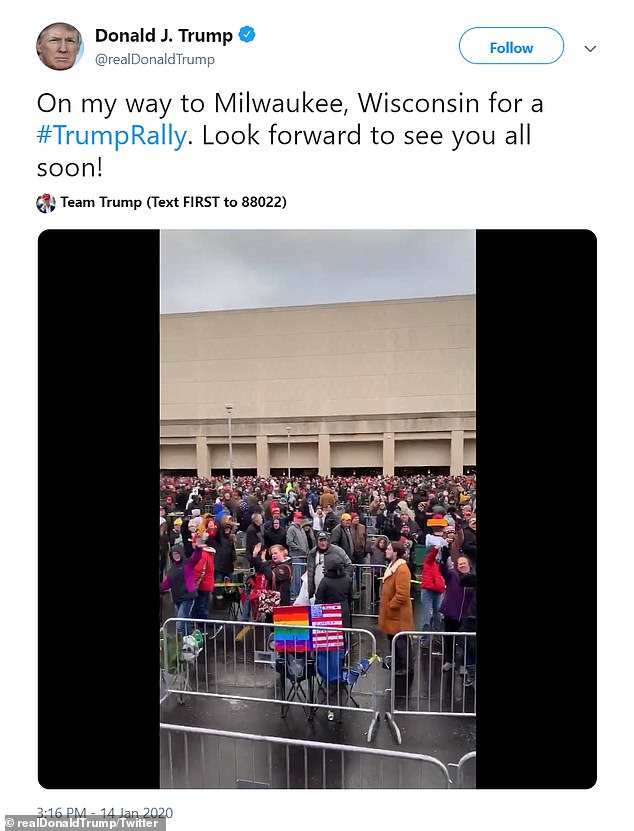 The president remained silent on Twitter all morning and afternoon, tweeting for the first time as he departed the White House to head to the rally in the rust-belt swing state

The president remained quiet all day Tuesday on Twitter as attention was drawn to Capitol Hill, and Trump has continued to deny any wrongdoing, dubbing impeachment a partisan ‘witch hunt.’

He only broke his silence on social media as he left for the rally, tweeting before boarding Air Force One: ‘On my way to Milwaukee, Wisconsin for a #TrumpRally. Look forward to see you all soon!’

Although the first half-hour of Trump’s remarks ignored the news of the day, he finally brought up impeachment by calling it ‘partisan’ and the ‘greatest hoax’ in U.S. history.

‘We got – you know, Nancy Pelosi says, ‘It must be nonpartisan!’ And she said it has to be clear-cut. Well number one, it never happened. No problem. Number two, look at the vote. Three Democrats voted with us. So I guess you could say it was a nonpartisan vote because they voted with us, okay?’ Trump said to enthusiastic rally-goers who booed impeachment.

Trump took his two-hour flight to Wisconsin to lament that Apple would not agree to unlock the phone used by the Pensacola shooter. He also took a hit at Democratic leaders who headed the impeachment inquiry in the House.

‘Cryin’ Chuck Schumer just said, ‘The American people want a fair trial in the Senate.’ True, but why didn’t Nervous Nancy and Corrupt politician Adam ‘Shifty’ Schiff give us a fair trial in the House. It was the most lopsided & unfair basement hearing in the history of Congress!’ the president tweeted, using derogatory nicknames he dubbed for Senator Chuck Schumer, House Speaker Nancy Pelosi and Intelligence Chairman Adam Schiff.

Trump’s Keep America Great rally in Milwaukee, Wisconsin is also being held on the same night as Democrats hold their first presidential primary debate of 2020.

The Panther Arena at the University of Wisconsin, Milwaukee seats up to 12,700 people.

In the 2016 election, Trump narrowly won the swing state with 47.2 per cent of the vote compared to Hillary Clinton’s 46.5 per cent. But Clinton faced a slew of backlash for largely ignoring Wisconsin and not campaigning there once during the general election.

Now Democrats are trying to fix their mistake by focusing more attention on the midwest and rust belt swing-states. They will hold their Democratic National Convention in Milwaukee, Winsconsin in July this year.

Trump held his first rally of the year last Thursday in Toledo, Ohio. There he celebrated his drone strike directive that took out Iranian General Qassem Soleimani.

Hope Hicks steps out for lunch with LionTree founder Aryeh Bourkoff
The properties, art and yachts bought by financier pal of Leo DiCaprio who stole billions
Family sues CIA to find body of post-9/11 detainee
Ocasio-Cortez: Trump 'scared' after vows US will 'never be socialist'
Lori Loughlin's daughter Olivia Jade 'terrified she'll have to testify in college cheating scandal'
Instagrammers are condemned for tone-deaf 'Pray for Bahamas' messages
Body of missing boy pulled from Massachusetts river three days after cousin
Mom and three children who lived in Disney resort-created town 'are found dead in their home'