A massive 350-pound fish thought to be 50 years old has been caught off the coast of , leading researchers to call it a ‘a big old fish!’

The FWC Fish and Wildlife Research Institute revealed that the massive Warsaw Grouper was caught by a fisherman using the hook and line method in southwest Florida on December 29.

The research institute shared photos of the ‘big old fish’ on Facebook, noting that this is the oldest sample collected for their aging program.

‘Biologists from FWRI’s Age & Growth Lab estimated the age of this fish at 50 years old, making this the oldest sample collected for our ageing program.’

This fish was originally caught by a group of men, including Jason Boyll.

Boyll celebrated the catch on Facebook, writing: ‘What a way to end 2019!!! Absolute beast of a Warsaw grouper. Cheers to tight lines and good times in 2020 yall.  Fish onnnnnnn.’ 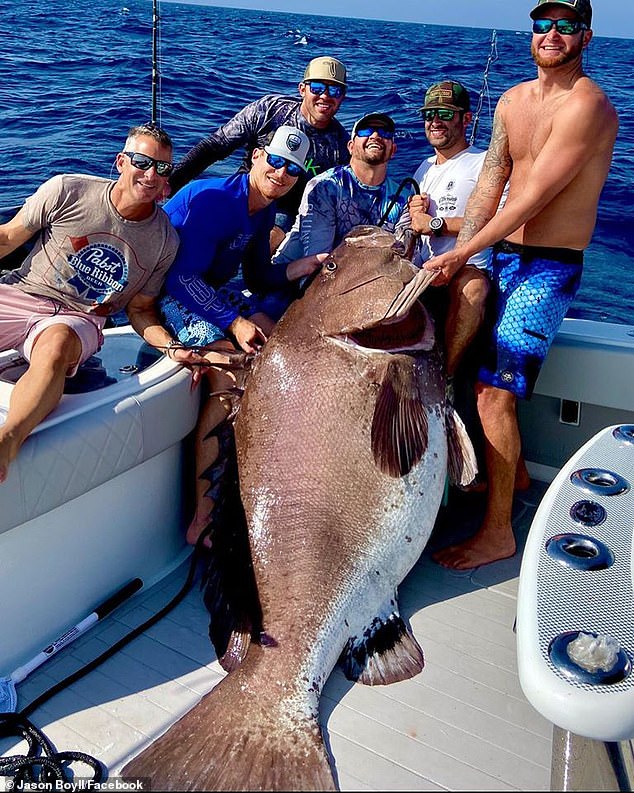 Boyll: ‘What a way to end 2019!!! Absolute beast of a Warsaw grouper. Cheers to tight lines and good times in 2020 yall. Fish onnnnnnn’ 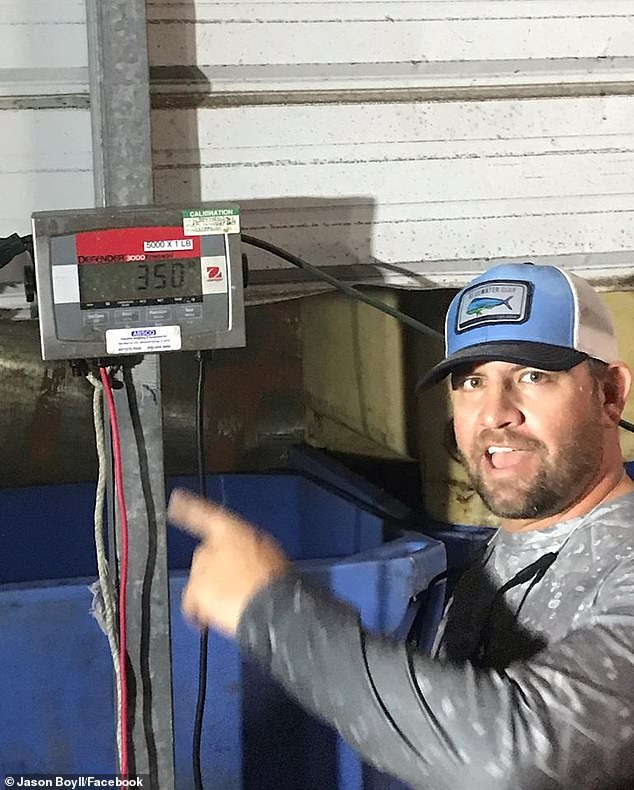 Pictured: Boyll shows off the astonishing weight of the Warsaw Grouper that researchers believe is 50 years old

The research institute expressed how important it was to study the fish’s otolith, or ear stone.

‘Acquiring the otolith from this fish was extremely valuable as samples from larger and older fish are rare,’ they wrote.

Researchers determined the Warsaw Grouper’s age by studying the otolith, or ‘hard, calcium carbonate structures located directly behind the brain of bony fishes’

The post continued to explain that Warsaw Groupers are distinct from other types of Groupers based on their dorsal spines.

‘Warsaw are characterized by an elongated second dorsal spine. They’re the only grouper with 10 dorsal spines; all others have 11,’ they wrote.

‘Although adults usually occur in depths of 180-1700 ft, juveniles are occasionally seen around jetties and shallow-water reefs in the northern Gulf. ‘

Measuring the age of freshwater fish

The FWC Fish and Wildlife Research Institute used the Otolith to determine the fish’s age, but there are two common methods for this:

1. , or ‘ear stones’, are hard structures found behind the brain of bony fish. Researchers determine a fish’s age by counting the number of rings inside the otolith, similar to counting the rings tree.

2. came about during the Cold War when several countries were exploding nuclear warheads and infecting nature. The bomb carbon has settled into the world’s oceans and is used as a timestamp for a fish’s otolith. Researchers compare the bomb carbon found in otoliths to the amount found in atmosphere to determine age.

While the FWC Fish and Wildlife Research Institute appears astonished by the rare find, they caution against fishermen targeting Warsaw Groupers.

The status of the Warsaw Grouper Population in the Gulf in currently unknown.

According to the , Warsaw Groupers were identified as a ‘Species of Concern’ in 1997.

The reason for their population decline is said to be fishing and bycatch.

‘Fishing is primarily by hook and line and the species is caught incidentally in the deepwater snapper/grouper commercial fishery,’ the NOAA wrote.

‘Almost all of the catch is in the Gulf of Mexico.’

According to , the most recent Warsaw Grouper catch doesn’t rank on the list of 10 Giant World-Record Groupers.

A 436-pound Warsaw Grouper caught in December 1985 off the Gulf of Mexico in Florida ranks number two on the list.

The largest fish on the list is a 680-pound Goliath Grouper that was caught off Fernandina Beach, Florida, in May 1961.

Canadian mint worker who smuggled 22 gold pucks in his rectum
SEBASTIAN SHAKESPEARE: Diana’s most debonair lover Oliver Hoare dies
Dick Dale dies aged 81 after surf rock pioneer's battle with multiple illnesses
George Michael's former lover Fadi Fawaz is arrested by police
Britney Spears' father Jamie 'will continue to act as her conservator'
Father notices sun spot on his neck before doctors are forced to remove a MASSIVE chunk of his skin
Anxious shoppers across the US line up at stores to stockpile water, toilet paper
Coronavirus US: Texas pauses reopening after surge in cases