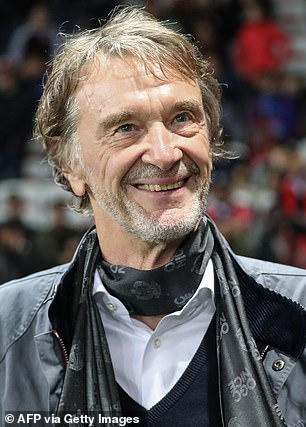 The owner of chemicals giant Ineos, 67 – who is worth more than £18billion – had lodged plans for the new building to be elevated on wooden posts to combat ‘rising flood levels as a result of ‘.

Neighbours of his sprawling estate in Hampshire’s New Forest National Park are thought to have objected to his plans, claiming it would blight the landscape and ‘stick out like a sore thumb’.

But Sir Jim has now won the six-year planning battle with neighbours, planning authorities and conservationists to get his £6million mansion built.

The national park authority has approved plans for the summer house, which will be made from ‘oak and cedar shingles’.

The planning documents describe it as: ‘An ideal spot for relaxation, the isolated setting and scenic views are key qualities to the design of the summer house.

‘The semi-open spaces intend to encourage occupants to enjoy the advantages of the great outdoors and living in the New Forest National Park, an area renowned for its picturesque countryside.

‘The structure would be lightweight and erected on a raised platform on wooden posts. 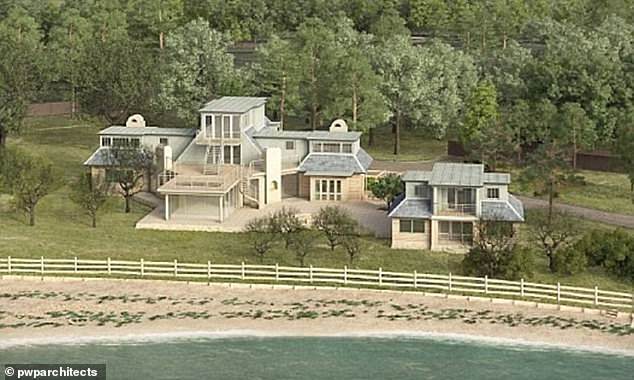 The owner of chemicals giant Ineos, 67 – who is worth more than £18billion – had lodged plans for the new building to be elevated on wooden posts to combat ‘rising flood levels as a result of climate change’. Pictured: The main house planned by Sir Jim

‘An elevated timber deck will border the summer house. Lifting the building floor height addresses the site’s susceptibility to rising flood levels as a result of climate change.’

New Forest National Park Authority approved plans on the basis that no one stays overnight in the building, does any cooking and there is no outside lighting.

In its report it states: ‘The building the subject of this permission shall only be used for purposes incidental to the dwelling on the site and shall not be used for habitable accommodation such as kitchens, living rooms and bedrooms.

‘No external lighting shall be installed on the site.’

It also states that it must be built in materials matching the mansion, which lies to the north, and work must begin in the next three years.

Building work began on the Thorns Beach site, near Beaulieu in 2018.

Neighbours of his sprawling estate in Hampshire’s New Forest National Park are thought to have objected to his plans, claiming it would blight the landscape. Pictured: The floorplan for the house Sir Jim has planned

Sir Jim, who grew up in a Manchester council house, bought BP’s chemicals division in 1992, renaming it Inspec and later Ineos.

The entrepreneur increased his wealth by more than £15billion in 2017, catapulting him to the top of the Sunday Times Rich List. He was knighted in 2018.

Ineos sells 60m tons of petrochemicals a year, used in industries from food packaging to car manufacture, with 17,000 employees in 16 countries.

Last year, he bought Team Sky and promised £40million a year investment in the team which then won the Tour de France with Colombian rider Egan Bernal.

Sir Jim, a keen triathlete and sailor, bought Swiss football team Lausanne in 2017 and invested £110million in a British challenge for the America’s Cup with Sir Ben Ainslie in 2018. He has been linked with buying Chelsea FC should Roman Abramovich choose to sell.

Sir Jim graduated from the University of Birmingham with a 2:1 degree in chemical engineering. He married his first wife Amanda Townson in 1985.

The pair, who have two sons, divorced in 1995. He has a daughter with his second wife Alicia.

Married at First Sight star finds out his spouse is on a DATING APP
Family's throwback Christmas photo goes viral for very unusual reason - can you spot why?
David Walliams accused of racism over children's book character Raj
Chris Watts murdered his daughter after she walked in on him strangling his pregnant wife Shanann
Pregnant woman sick of having lunch stolen at work gets food thief fired - turns out to be an exec
Transgender man fighting to be registered as 'father' or 'parent'
Prince Andrew enjoys party at Tramp nightclub 72 hours after Virginia Roberts claims they went
London Fire Brigade is 'worryingly inadequate' watchdog says