Five people are dead and at least 60 have been injured after a horror crash on the Pennsylvania Turnpike early Sunday morning.

Multiple vehicles were involved in the crash near Mount Pleasant, including a tour bus, two tractor-trailers and passenger vehicles, according to Turnpike spokesman Carl DeFebo.

The Westmoreland County coroner confirmed the five fatalities and said at least 60 people were hospitalized with injuries.

It is unclear what caused the crash, which occurred at around 3.30am. Investigators with the National Transportation Safety Board are reportedly on the scene.

The Turnpike has been closed in both directions for 86 miles between Exit 75 in New Stanton and Exit 161 in Breezewood.

An Excela Health spokesperson confirmed that Frick Hospital in Mount Pleasant is treating 25 patients, WPXI reported. They range in age from seven to 52 and nine are under 18 years old. 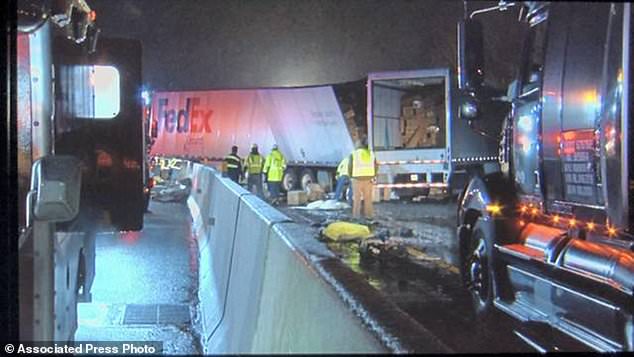 Younger Americans cause the U.S. divorce rate to plummet by marrying richer and later, study finds
The girl that stole Meghan's heart: How a nine-year-old's T-shirt earned her a selfie of a lifetime
Woman questioned in disappearance of Michael Stewart said her boyfriend killed someone
Martha Stewart talks SHOES as she launches new Aerosoles collection
Police show body cam footage from Cleveland Heights High School brawl after arrests on eight people
Woman describes the disgusting moment a giant RAT fell from the ceiling of a Buffalo Wild Wings
A mob armed with sticks attack a rival soccer fan in savage beating in Brazil
Pet cat lives on her own for 40 days after all seven members of her owner's family had coronavirus