changed up her look to attend the Palm Springs afterparty with her fiancé Alex Rodriguez on Thursday night.

The actress and singer, 50, went braless under a silver embellished jumpsuit which was semi-sheer in design and had ostrich feather sleeves.

The top had a cape section which tied with a bow at the top and she carried a metallic mini clutch in her hand. 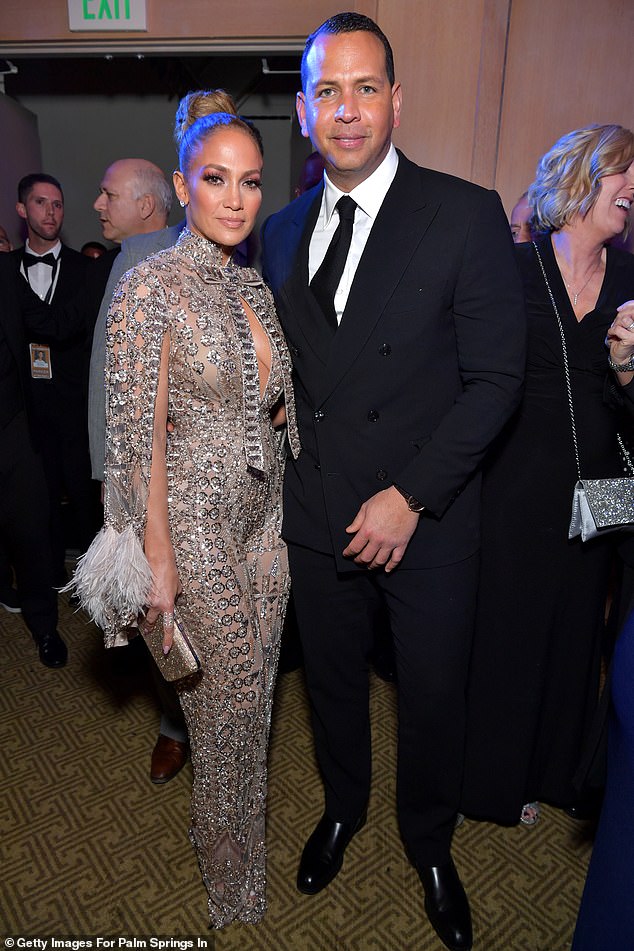 Mix and match: Jennifer Lopez went braless under a  keyhole silver embellished jumpsuit as she cosied up to fiancé Alex Rodriguez at the Palm Springs Film Festival afterparty

J-Lo’s hair was tied up in her signature high bun as she linked arms with sportsman Alex and actor Jamie Foxx.

Earlier in the night, Jennifer wore a completely different look to attend an awards ceremony at the festival, held at the Palm Springs Convention Center. 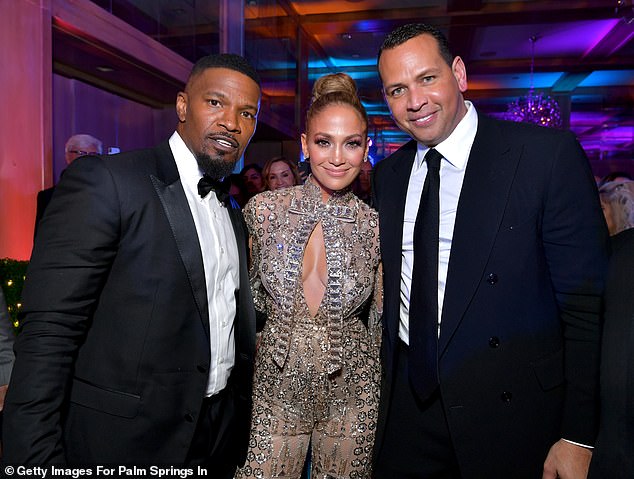 Friends in high places: J-Lo’s hair was tied up in her signature high bun as she linked arms with sportsman Alex and actor Jamie Foxx, (left) 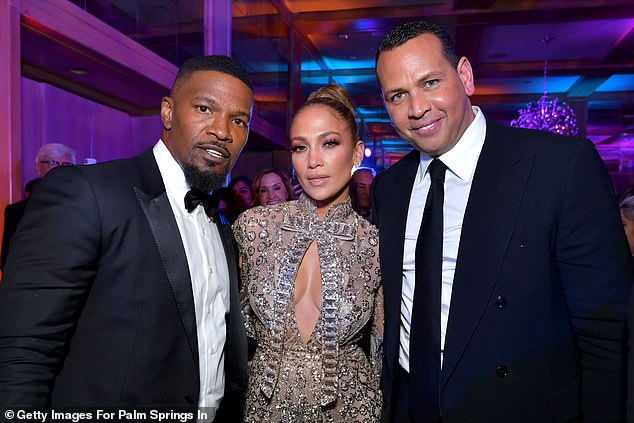 All eyes on her: Jennifer had earlier picked up a Spotlight Award for her role in Hustlers

Shine like Jennifer in a jumpsuit by Zuhair Murad

Jennifer Lopez looks dazzling in this silver embellished, sequin jumpsuit from Zuhair Murad’s AW19 couture collection and we are feeling super inspired by her look.

With her hair slicked back into a bun and a subtle smokey eye, J-Lo really got heads turning and how could she be missed in such an eye-catching number?!

This sparkling jumpsuit is a total show-stopper and really ensures that all eyes are on you. If all of that embellishment wasn’t enough, there are even feathers are the tails of the sleeves – how dreamy!

Click (right) to take a closer look at this piece, or head to the carousel below to channel Jennifer’s vibe by shopping our edit of silver sequin jumpsuits.

She wore a pretty floral strapless gown which had a dramatic long train and was bedecked with pink roses with green leaves.

Jennifer, who is hopeful of a Golden Globe for her role in new movie, Hustlers, picked up the Spotlight Award on the night.

She and Alex announced their engagement in March 2019 after two years of dating.

It will be Lopez’s fourth marriage and Rodriguez’s second marriage. 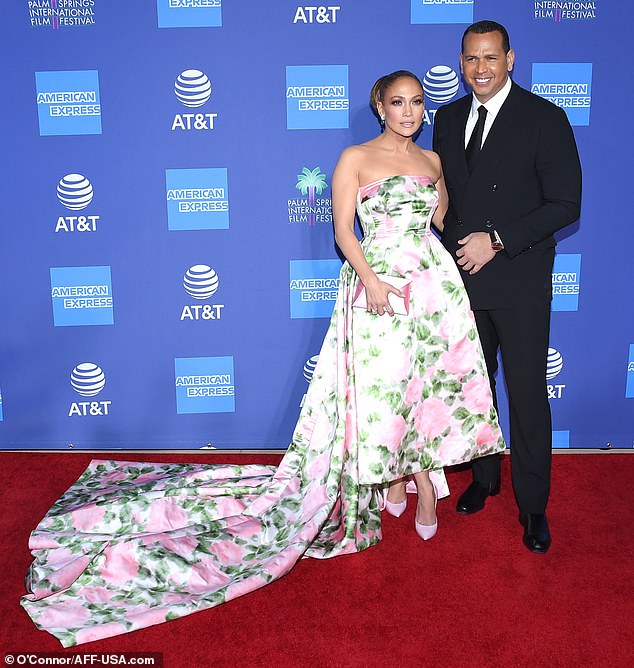 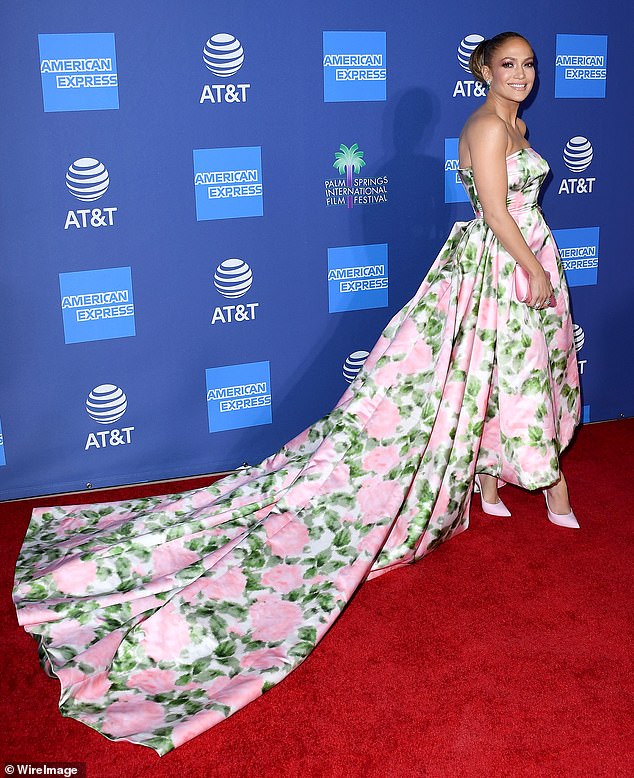 Pretty: The floral frock was cinched at the waist and fell to mid-calf revealing her ankles and pale pink heels

Meanwhile, the singer-turned-actress previously admitted she had to shake off her ‘diva’ label from the early days.

She said: ‘I had terrible things happen in the beginning of my career that I had to come back from.

‘I did magazine articles where I said the wrong thing. It was a trial-and-error thing.

‘And then you get put in a category of like you’re this person or that person and you’re a diva. 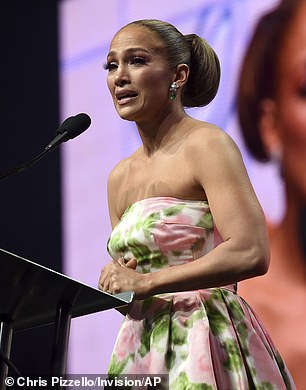 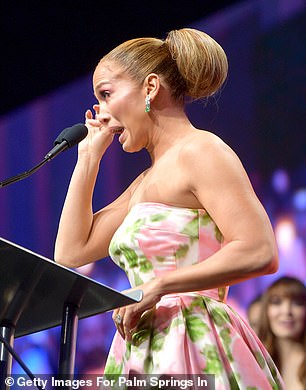 Drama: Lopez became emotional as she took the stage to collect her award. The actress appeared to wipe a tear from her eye during her acceptance speech

‘But at the same time, I had to look and go, what am I doing? Because at the end of the day, it’s always do you like what you’re doing. And for me, it’s always about how can I get better? That’s why I do so much. How can I be better? I’m going to be a better mom, sister, daughter, friend, business partner, a better actress, better singer, better dancer, better producer. It’s always about, how can we do it better next time? Because you make mistakes.’

The On The Floor hitmaker recently admitted her twins want her and Alex to have another baby and love the fact the retired baseball star has two daughters, Natasha, 15, and Ella, 11, from his marriage to Cynthia Scurtis because they have become ‘bonus sisters’ to them.

She said: ‘I think they would love to have a brother or sister. They love having Natasha and Ella in their lives and having two extra bonus sisters. We really form a beautiful blended family and I think they would all be thrilled.’ 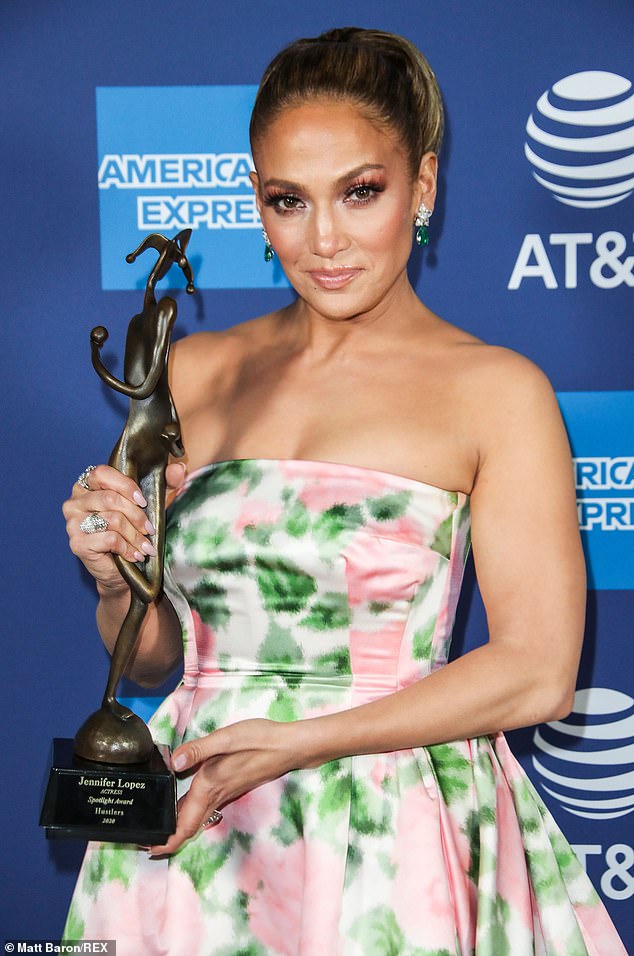 Prize: JLo beamed happily backstage with her trophy after the event