This is the shocking moment a terrified man runs back into the safety of his house after attempting to film an approaching tornado.

The footage, which was captured in Pineville, Louisiana, shows the anonymous resident film the ferocious storm from the outside of his property on his mobile phone.

However as the winds grow in strength and the tornado draws closer sending debris flying past his home, the scared resident flees the scene back into his property.

The shocking footage comes just weeks after an ‘extremely dangerous’ storm traveling at a staggering 63 miles ripped through Alexandria, Louisiana. 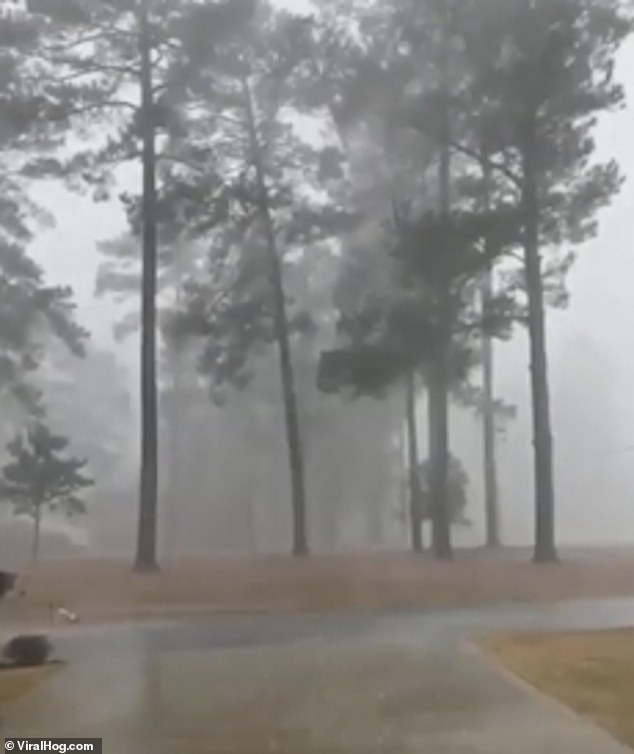 The resident, from Pineville, Louisiana, films the ferocious tornado winds outside his property 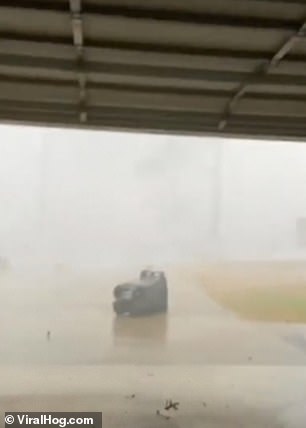 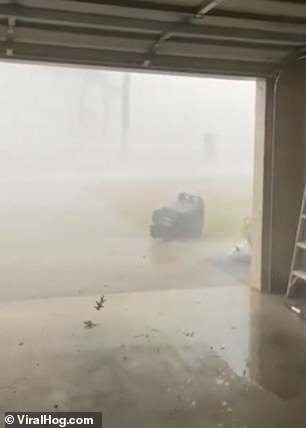 As the tornado approaches, bins are sent flying across the street (left and right) and pieces of debris fly past

During the clip, which was filmed on December 12, the resident stands at the entrance of his garage and films the trees battle the fierce winds.

As the tornado rips through the area, it knocks down bins in its path and rips branches off the trees, leaving the scared resident running back into his house.

Following the incident, the terrified resident told that he had been awaiting the arrival of his wife, who was having her intravenous immune globulin treatment, when he decided to stand outside and ensure she got back home safely.

He said: ‘She was supposed to be driving home in some terrible weather. So I was outside in my garage watching for her. When the tornado started coming.

‘I was frantically calling and she hadn’t answered yet.

‘So I hit video when the tornado started coming in. I actually got in touch with her minutes after the tornado passed.’ 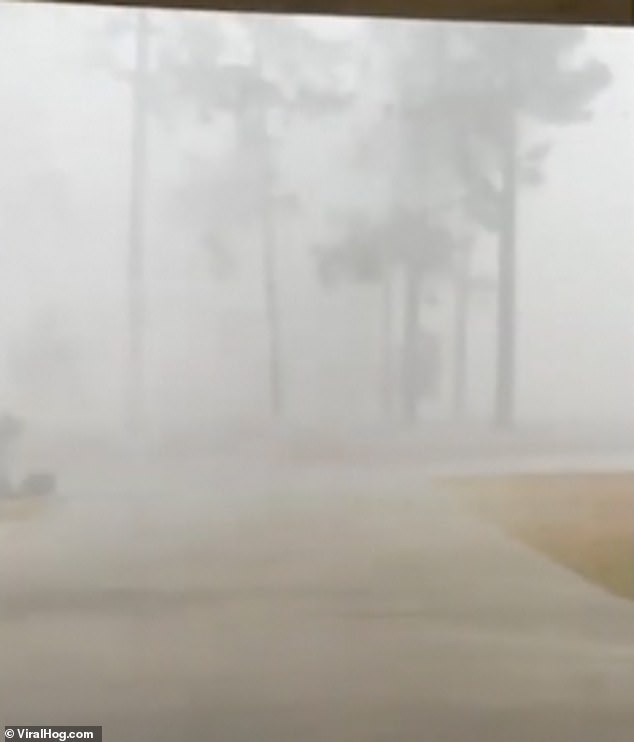 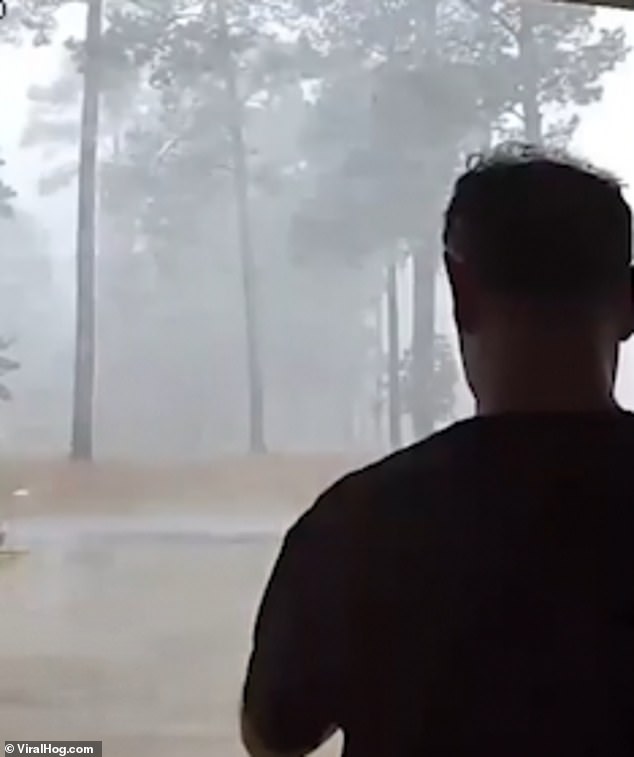 Moments later, the tornado begins to draw closer and the scared resident, who had been filming the scene on his mobile phone, runs back into his house

The terrifying scenes comes just weeks after at least three people were killed and others were left injured as a series of dangerous storms and tornadoes ripped through that states of Louisiana, Alabama, and Mississippi.

On December 16, more than 70 tornado warnings were in effect across the U.S. states and there were at least 33 tornado reports.

In Alexandria, Louisiana, an ‘extremely dangerous’ twister was also seen ripping through the area at a staggering  63 miles as residents rushed for cover.

As the deadly storms continued to make their way across the country, the National Weather Service announced a tornado emergency for the area of Alexandria, Louisiana which is home to 47,000 people.

Latest figures provided by the National Weather Service reveal that in 2019 there were 41 fatalities caused by dangerous tornadoes. 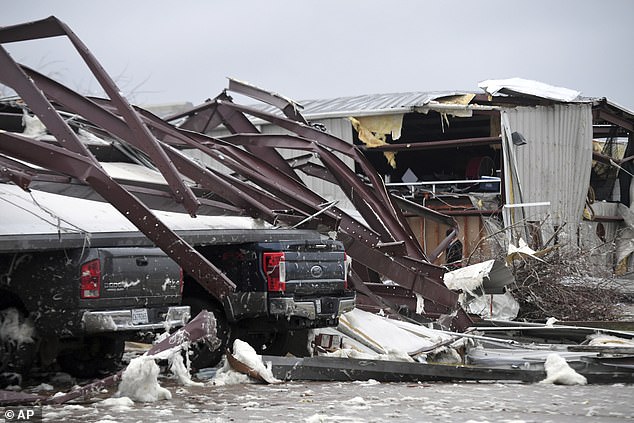 The latest tornado comes just weeks after at deadly storms made their way across Louisiana, Alabama, and Mississippi. Pictured: Trucks are covered in debris e in Alexandria, Louisiana following a deadly tornado 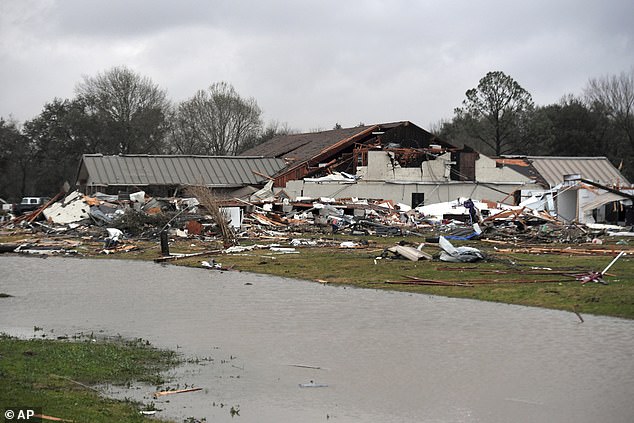 McConnell blasts Democrats for taking 'darker road' against Kavanaugh
Greggs profits rise 14% in the first seven months of 2019 thanks to new vegan sausage rolls
Tina Malone avoids jail for sharing 'image of James Bulger killer Jon Venables'
Second man, 29, is arrested on suspicion of murder after eight months pregnant woman, 26 is stabbed
No girls born for three months in 132 Indian villages amid fears of sex-selection
BBC staff lose £550,000 of phones and laptops in last five years - enough to pay 3,500 licence fees
Andrea McLean and Kay Burley talk about the menopause
Autumn and Peter Phillips arrive together at the Cheltenham Festival