Bill de Blasio has slammed Domino’s for selling pizzas to Times Square revelers for $30 a pie – more than twice the usual price for their plain cheese option.

The Mayor called out the fast food chain on his official Twitter account on Wednesday, labeling the move ‘exploitation’.

It comes after revealed one branch of the restaurant franchise opted to charge $30 for the pepperoni, ham and cheese pizzas. A plain cheese pie is normally $14.49 for the large.

de Blasio tweeted: ‘Jacking up your prices on people trying to celebrate the holidays? Classy, @dominos.

‘To the thousands who came to Times Square last night to ring in 2020, I’m sorry this corporate chain exploited you — stick it to them by patronizing one of our fantastic LOCAL pizzerias.’

Thousands of people packed in to New York City’s Times Square as millions more watched live on television while the famed ball drop marked the start of 2020. 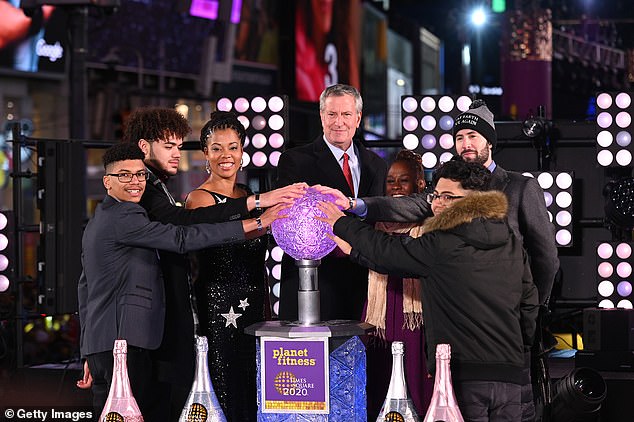 A deafening cheer rose from the crowd as the dazzling 12-foot diameter ball covered in 2,688 Waterford Crystal triangles finished its descent at the stroke of midnight, marking the start of the new year on the East Coast.

They had spent the day waiting in a locked-down security zone with not much to do for hours.

It is understood the pricey pizzas were from a Domino’s store in midtown Manhattan.

A worker there said they planned to sell their pies until the ball drop and had been doing so every New Years Eve for the last 15 years.

Banik was spotted carrying bags of pies, calling out to revelers who wanted them. He then ran back to the store to pick up more pies to hand out.

Amit Zanwar, 31, of New Jersey bought one of the pizzas. He said: ‘It’s absolutely worth it. It was hot. It seems like it just came out of the oven. If he comes back, I will buy some more.’

Another happy customer was Francisco Patalano. He added: ‘He probably sold about seven pizzas in less than two minutes. It was totally worth it.

‘I’m going to ration it out until midnight between me and my wife.’