Clubbers were herded into a strip club when a thug with a huge knife prowled the streets in .

Terrifying footage shows the giant blade shining underneath streetlights as an attacker runs through Shoreditch.

The video initially shows what appears to be a fight breaking out on at around 2am on Sunday, with shouting and people running along Hackney Road. 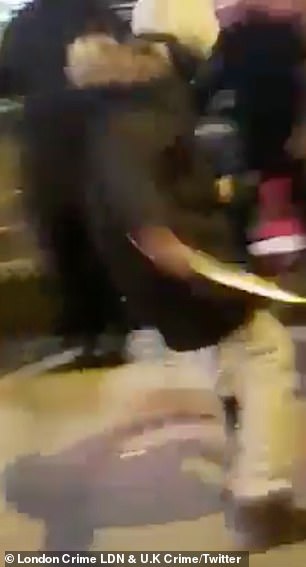 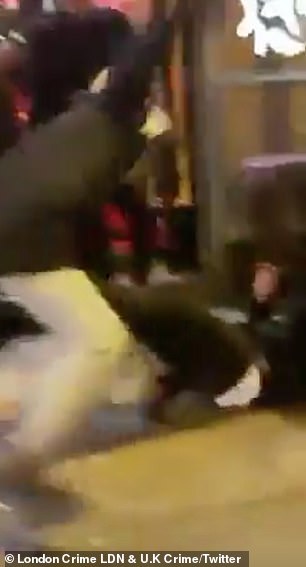 Terrifying footage shows the giant blade shining underneath streetlights as an attacker runs through Shoreditch (left). But it takes a sinister turn as one man with an enormous weapon is seen trying to attack a man lying on the floor (right)

But it takes a sinister turn as one man with an enormous weapon is seen trying to attack a man lying on the floor.

A woman screams ‘No, no, no, please’ as the attacker slashes at the man lying close to Browns lap-dancing club.

A man who appears to be a bouncer repeatedly shouts for the victim to get inside as he tries to protect people from the knifeman.

It came just hours before two teenagers were viciously attacked in nearby Walthamstow on Sunday night.

Twitter users said they were sickened by the weekend’s footage. One said: ‘It’s really crazy these days.’

One wrote that ‘London has fallen’, while another added: ‘The person responsible for this should be put down.’

A woman posted: ‘I have friends in London but moved away to leafy Yorkshire many years ago because I reckoned crime was getting worse and it would become more crowded and dangerous. 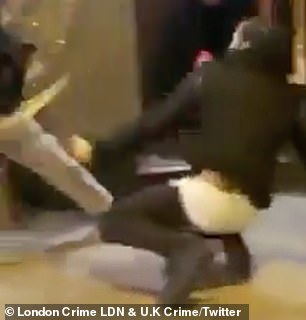 ‘I have returned only twice and have felt truly shocked at just how bad things have deteriorated. So damn sad.’

And one man added: ‘It’s time to get tough and deal with this problem. Life means life.’

The Met Police arrested three people in connection with the stabbing.

Officers found two men in their teens suffering from stab injuries and they were rushed to an east London hospital.

Their injuries are not life-threatening.

Three teenage boys were arrested on suspicion of offences including affray and causing grievous bodily harm.

They have been bailed to return on a date in late January.

Detective Sergeant Dave Barrett said: ‘We have seen the video of the incident circulating on social media and this is forming part of our enquiries.

‘I am urging anyone with information on this incident to call us and tell us what they know.

‘I also am requesting anyone who has other videos of the incident, or the moments surrounding the incident, to contact us and share them.

‘This could really assist the investigation and we will treat your information with sensitivity.’