After racing to finish the renovation before giving birth on December 18, the Sunrise newsreader has now settled in with her husband, Neil Varco, and their daughter, Molly.

The stunning property features its original floors, a spiral staircase and even a ‘secret door’ which leads into the family’s powder room. 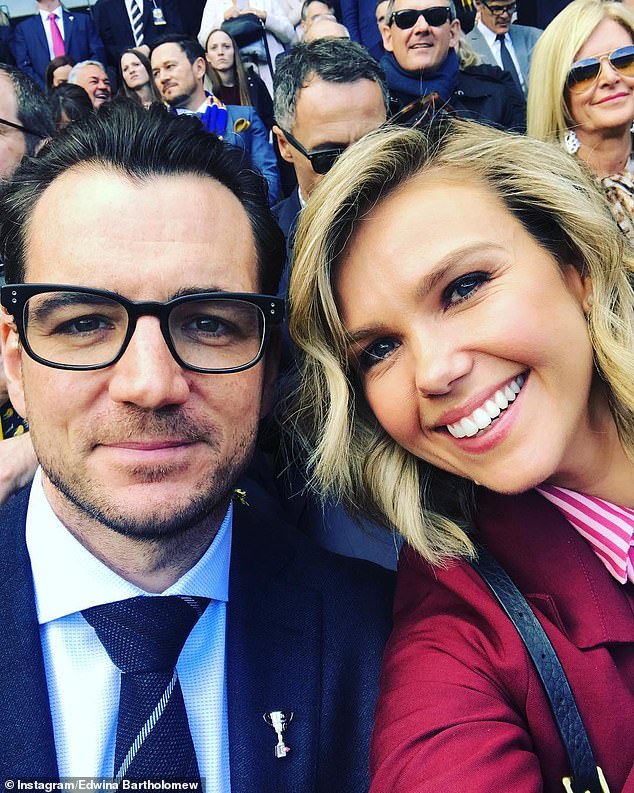 While work on the house is still ongoing, Edwina shared a photo of her almost-finished dining room, featuring a marble fireplace and bespoke drop lights, on Sunday.

The room has kauri pine floorboards from Tasmania, which are 150 years old and were an original feature of the house.

‘They’ve seen a lot of traffic over 150 years and sometime in the ’80s were stained an unfortunate shade of orange,’ Edwina said after having the floors professionally cleaned.

‘Now they look glorious and light and nearly ready for us to move back in!’ 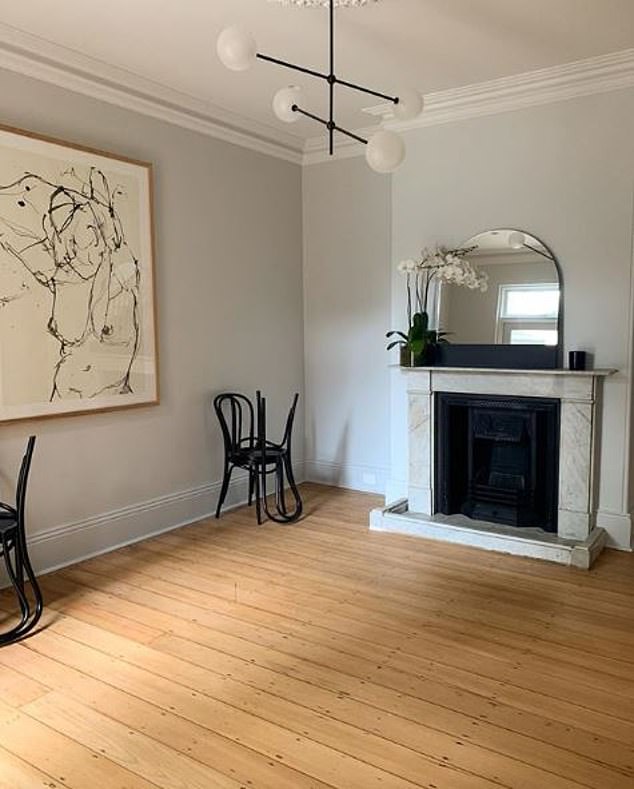 Stunning: After racing the finish the inner-west renovation before giving birth on December 18, the Sunrise star, Neil and daughter Molly have now settled in. Pictured: The dining room 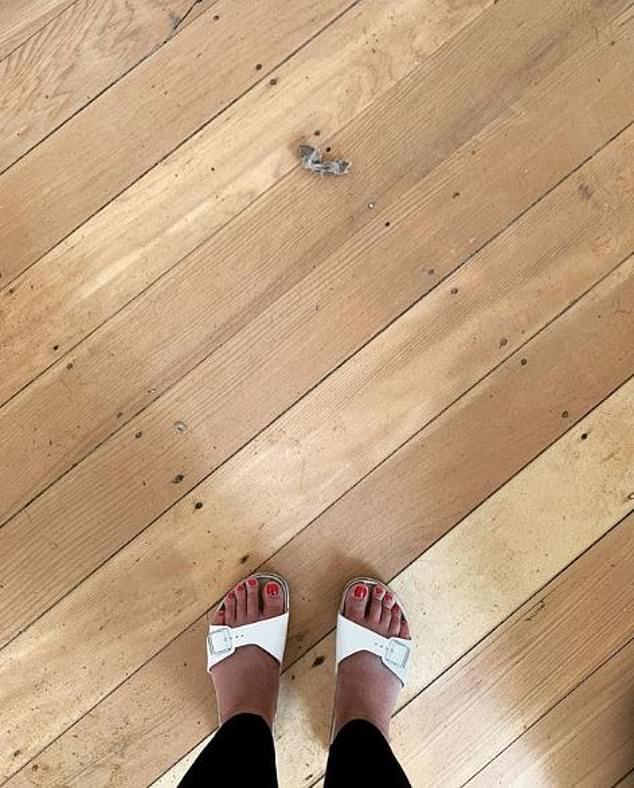 ‘In the 80s they were stained’: The dining room, which doesn’t yet have a table, has kauri pine floorboards from Tasmania, which are 150 years old and an original feature of the house

The kitchen, which boasts marble worktops and white cabinets, was one of the last rooms to be finished before the family moved in earlier this month.

A black heritage spiral staircase outside the property was also completed around the time the couple moved in to the house.

‘Installed in record time,’ wrote builders Wynn Build to Instagram on December 17, a day before Edwina gave birth to her first child. 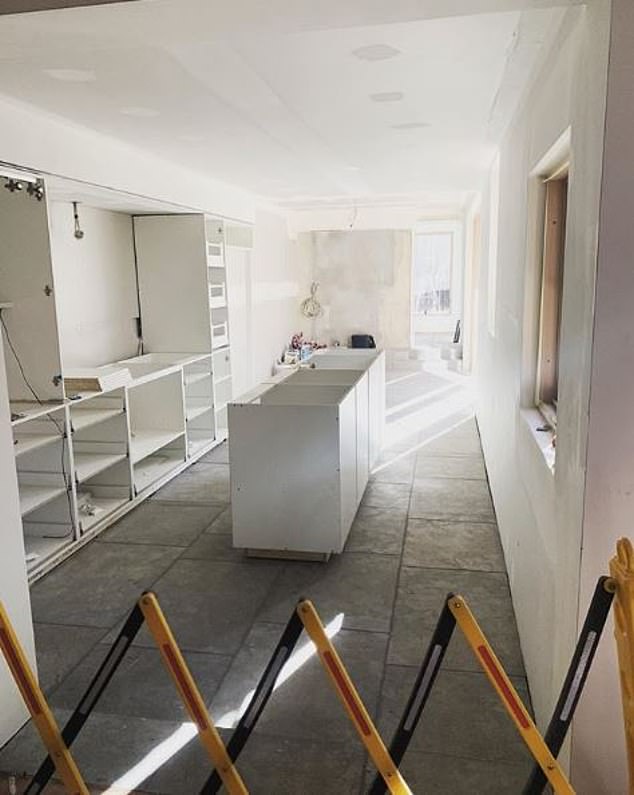 Before: The couple’s kitchen, with marble worktops and a custom cabinets, was one of the last rooms to be finished before the family moved in earlier this month 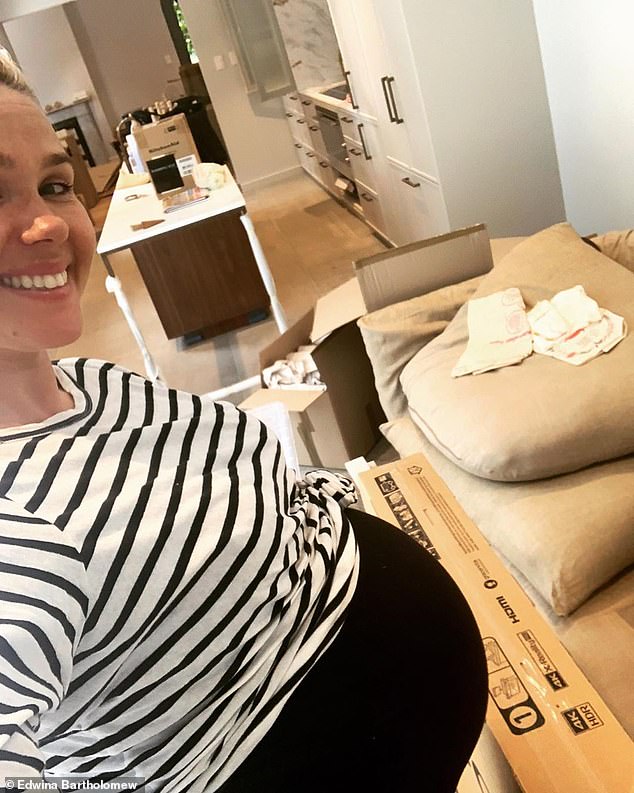 After: Before giving birth, Edwina shared this selfie showing her finished kitchen behind her 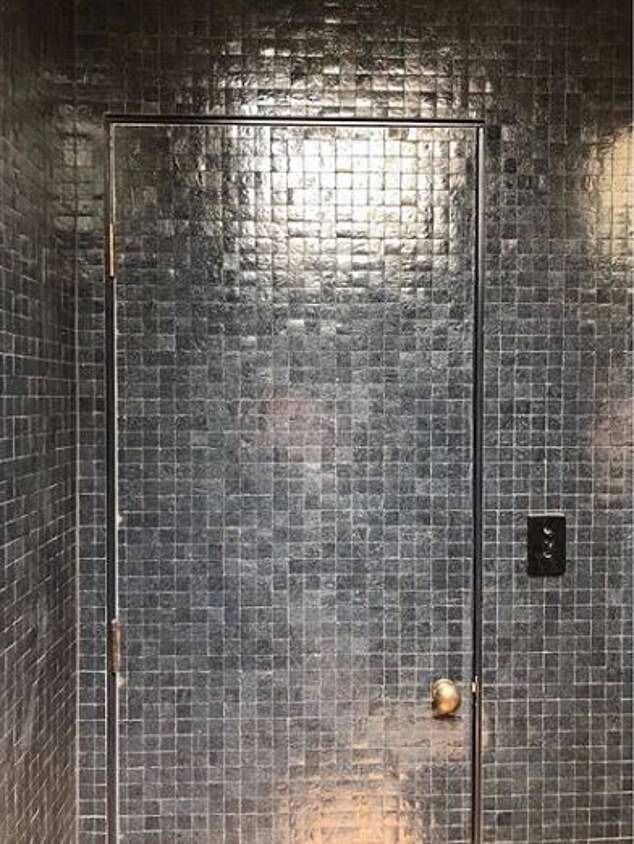 Impressive: The property boasts a ‘secret door’ leading into the family’s powder room

In September, Edwina shared a picture of her dog inside the working progress, while stood at the top of the stairs.

There was a noticeable lack of plastered walls and ceiling around the pet in the image, showing there was still a lot of work to be done.

A recent picture shows the same space is now unrecognisable and almost finished.

Edwina has teamed up with architect and interior designer Felicity Slattery from Studio Esteta, and builders Wynn Build for the project.

Despite promoting the companies on Instagram to her 177,000 followers, she has previously said there’s ‘no freebies’ and she is just grateful for their hard work. 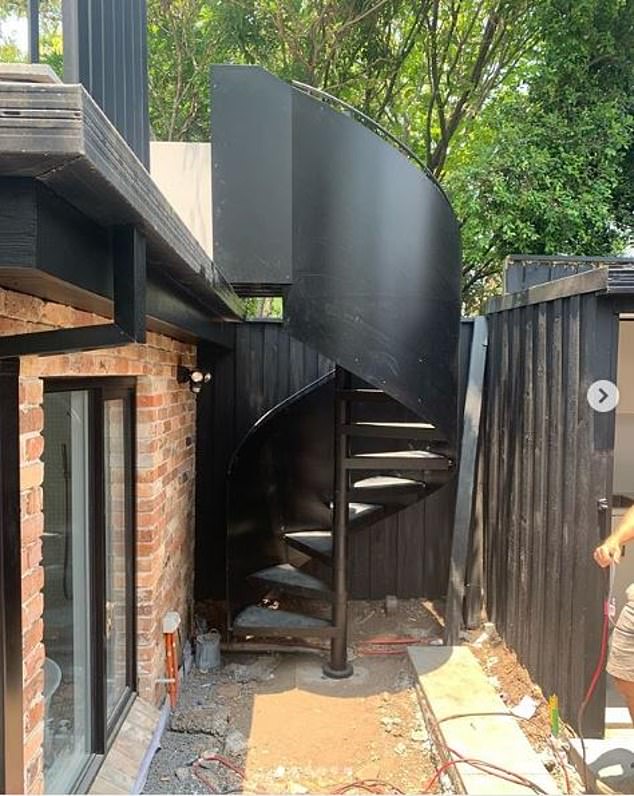 ‘Installed in record time’: A black heritage spiral staircase on the exterior of the property was also completed as the couple started to get settled in December 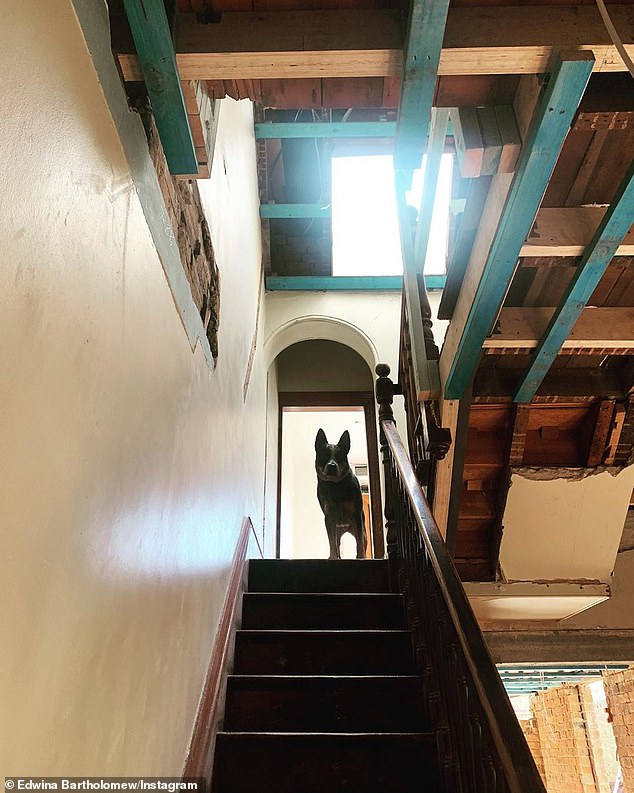 Coming along nicely: In September, Edwina shared a picture of her dog inside the working progress, while stood at the top of the stairs 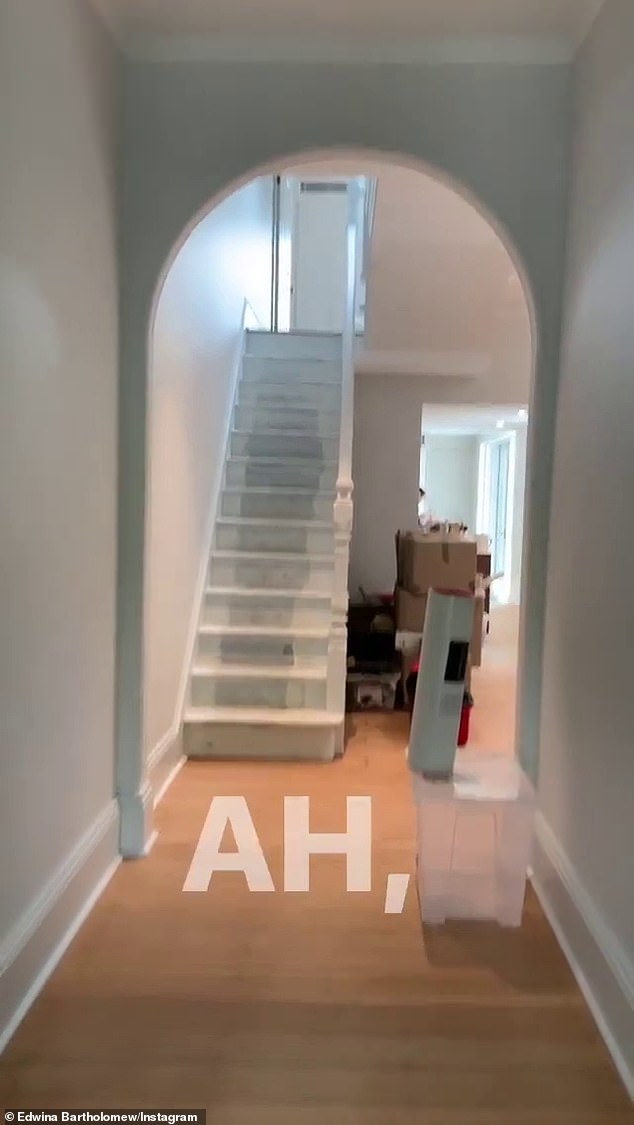 Nearly there: The same space is now completely unrecognisable and almost finished

On September 3, Edwina revealed the property’s history with fans on Instagram.

‘Our heritage house is slowly getting there. It was built by the descendants of James Bloodsworth, the very first convict bricklayer,’ said Edwina.

‘Bloodsworth was sent to New South Wales in 1788 as part of the First Fleet and was immediately appointed master bricklayer in the settlement at Sydney Cove.

‘He was responsible for building the very first structures in Sydney, including the first Government House. Bloodsworth was pardoned in 1790 and on 1 September 1791 was appointed superintendent of all the brickmakers and bricklayers.

‘The very next year he was offered rehabilitation to England, but he refused and stayed here for the rest of his short life.’ 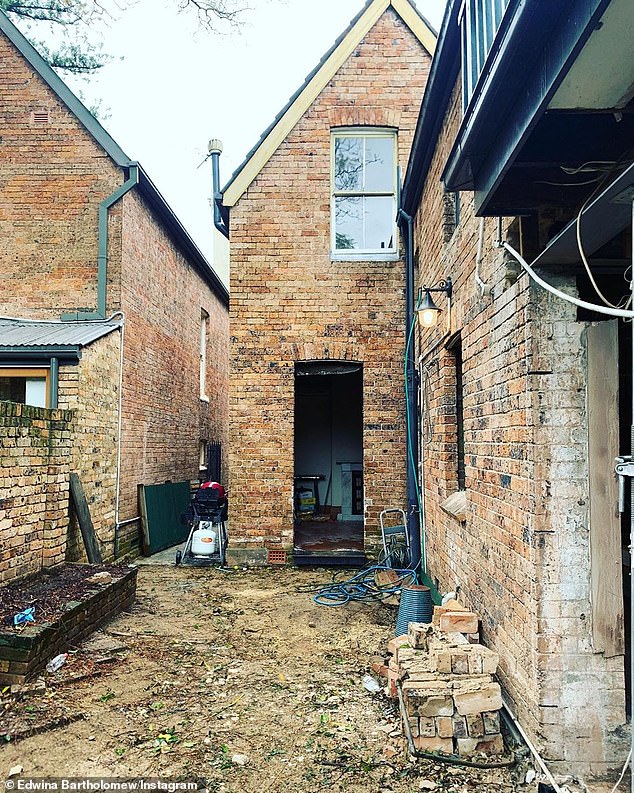 ‘It was built by the descendants of James Bloodsworth, the very first convict bricklayer’: On September 3, Edwina revealed the property’s history amid the lengthy renovation 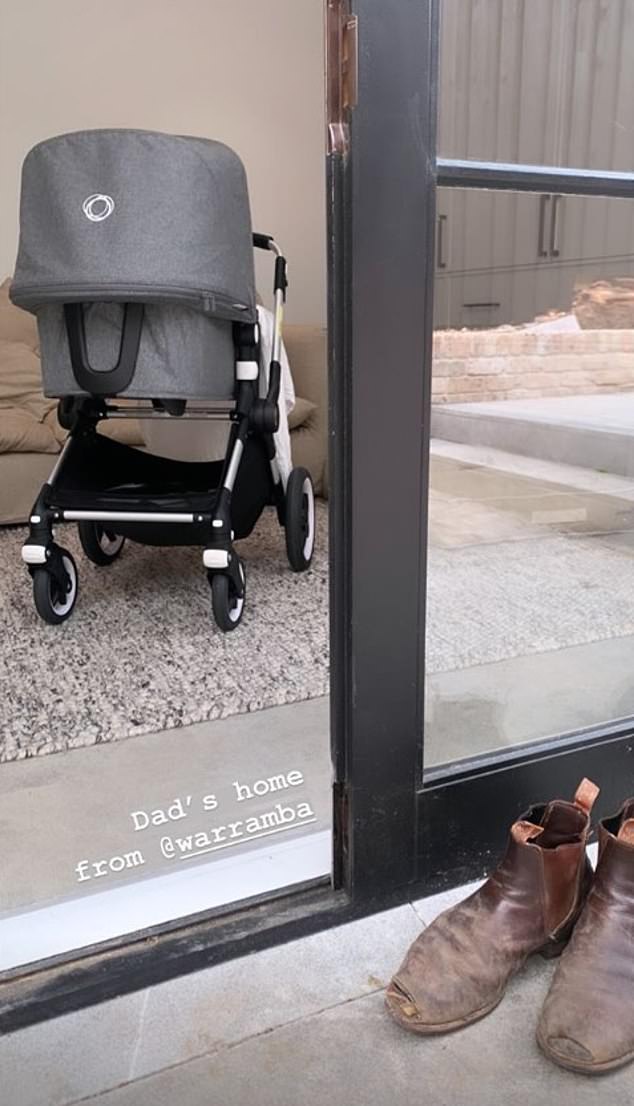 Family home: Edwina, Neil and baby Molly appear to be settling in perfectly 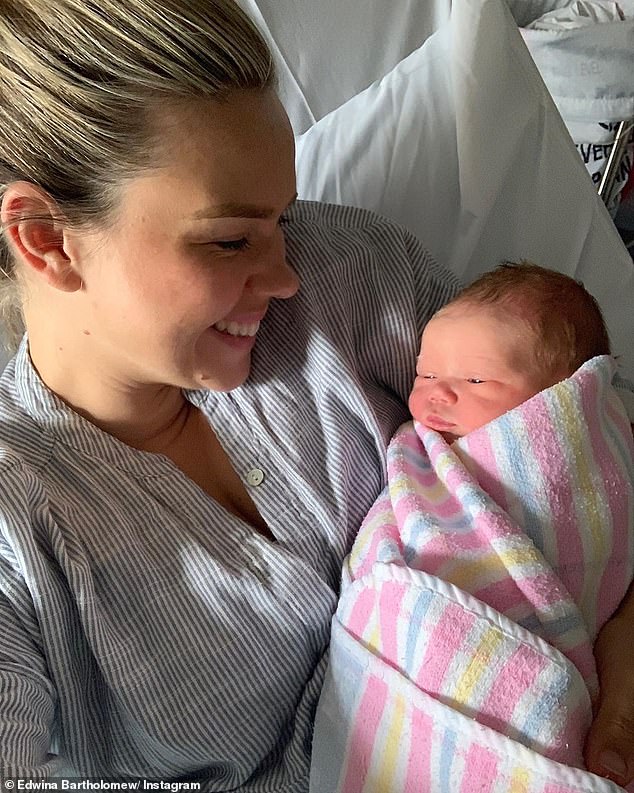