A 12-year-old girl is in a critical condition after being hit by a van as she walked along the pavement with her family.

Police are trying to identify the driver of the white van involved in the incident in Newbury, Berkshire, after they failed to stop at the scene of the crash.

The girl was heading towards Newbury town centre just before 9pm on Friday when she was hit by the flatbed van or recovery vehicle, Thames Valley Police said. 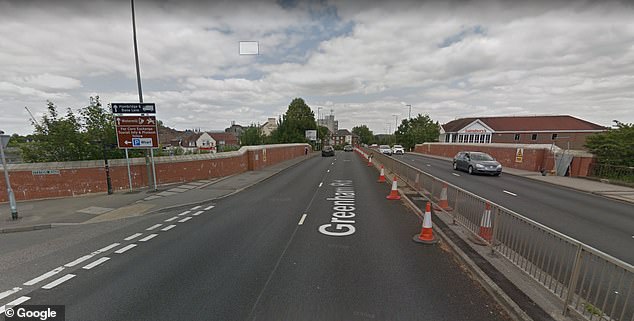 The girl was struck while walking over the railway bridge on the A339 heading towards Newbury shortly before 9pm yesterday. Thames Valley Police confirmed the victim is in a ‘critical condition’

She was taken by ambulance from the A339 near Station Road to the John Radcliffe Hospital in Oxford, where she is still receiving treatment.

Pc Mark Dunne of Thames Valley Police’s Serious Collision Investigation Unit said: ‘We are making an urgent appeal to anyone who has any information about this collision which has left a 12-year-old girl in a critical condition.

‘I am making a direct appeal to the driver of the vehicle to come forward.

‘If anyone witnessed the collision or has dash-cam footage then we would also like to hear from you.

‘The vehicle involved may have noticeable damage around the front nearside, so if anyone has seen a similar vehicle with damage then please contact the police as soon as you can.’

Give us an indication: Wartime sign revealed by gorse fireplace...
The terrifying moment an HGV smashes into two stationary cars
John Barrowman fires back at a 'homophobic' man who called him a 'poof' in a VERY heated exchange
Holly's M&S range is sold once every 15 SECONDS
Meghan 'breaks Wimbledon etiquette by wearing jeans on surprise visit to watch friend Serena play'
Prince Harry leaves Meghan and Archie behind in South Africa to visit schoolchildren in Botswana
Donald Trump tweets photoshopped picture of him giving medal to dog that cornered al-Baghdadi
How will Prince Harry and Meghan Markle make their money?