One age-old question has never been resolved: what makes a better story, reality or fiction?

Next year, TV fans will get the chance to make up their own minds, with a welter of superb dramas hitting our screens — some plucked from the pages of literature, others from real life.

Stories from classic authors such as Bram Stoker and Agatha Christie are brilliantly brought to life on the screen, as well as those from contemporary novelists including David Nicholls, Eleanor Catton and Vikram Seth.

And some of the most notorious crimes of recent decades are analysed, among them the shotgun murders at White House Farm, and ‘coughing’ Major Ingram’s attempt to cheat his way to riches on Who Wants To Be A Millionaire?. 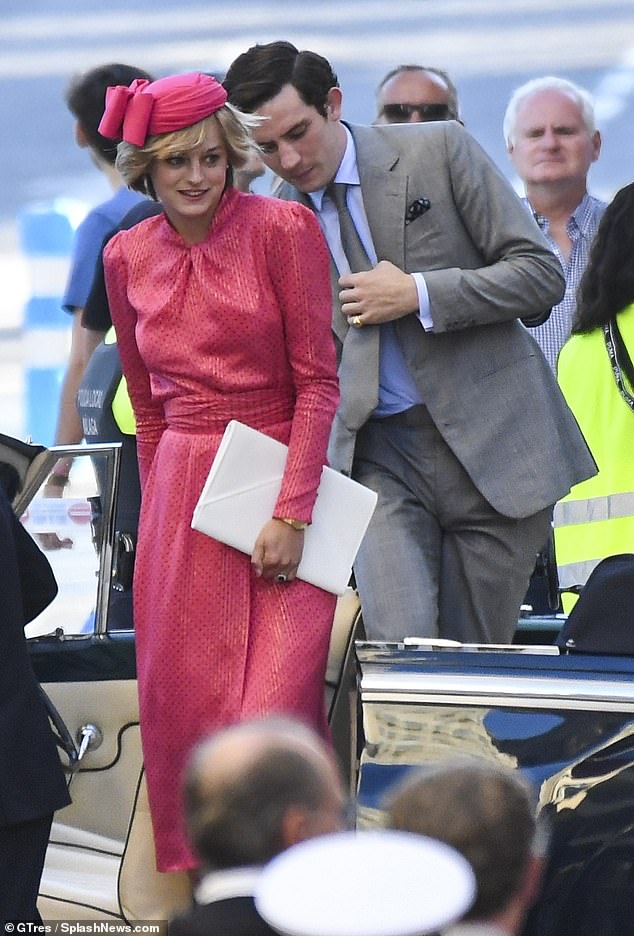 The Crown will see the story of Prince Charles, played by Josh O’Connor, and Lady Diana Spencer, played by Emma Corrin, unfold

Fact or fiction, which is your favourite? You’ve got all year to decide, based on these 20 shows…

Why you can’t miss this: A vampire with real bite.

Dracula gets the Sherlock treatment from writers Mark Gatiss and Steven Moffat, peerless at giving an electrifying twist to Victorian classics. 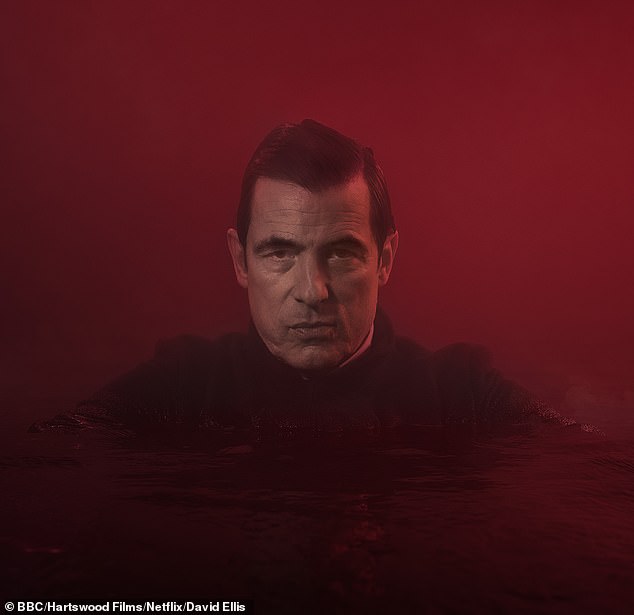 In their version of the Bram Srtoker classic, writers Mark Gatiss and Steven Moffat give Dracula the Sherlock treatment

In their version of Bram Stoker’s sex-charged tale of the supernatural, showing in feature-length episodes on three consecutive nights, the Transylvanian Count (Dane Claes Bang, below) is voracious and chillingly camp.

He has his blood-tinged eye on Mina Harker (played by Morfydd Clark) but Jonathan (John Heffernan), her husband, isn’t safe either, as Dracula leaves his castle to stalk the streets of London in 1897.

Moffat thinks Hammer films and the like have made Dracula seem too familiar and cosy to be scary.

‘You even see Dracula in the likes of Scooby-Doo,’ he complains.

‘So why not do something that takes those traditional scares seriously again?

‘Any kid who stays up to watch it will be properly frightened.’

Why you can’t miss this: You’ll want to know the truth.

On the night of August 7, 1985, Jeremy Bamber received a phone call from his terrified father.

Bamber’s adoptive sister, Sheila, had a shotgun and was ‘going berserk’, he said. By the time the police arrived at White House Farm in the Essex village of Tolleshunt D’Arcy, five people were dead: Sheila, her parents and her six-year-old twin sons.

At first, the sequence of events seemed obvious — Sheila, a schizophrenic, murdered her family and then killed herself.

But then detectives began to question the picture that Bamber was painting . . .

After 35 years, the White House Farm killings still rank among Britain’s most notorious crimes. This gripping six-part drama stars Stephen Graham and Mark Addy as the coppers searching for the truth — but it will be up to the viewer to decide where it lies. 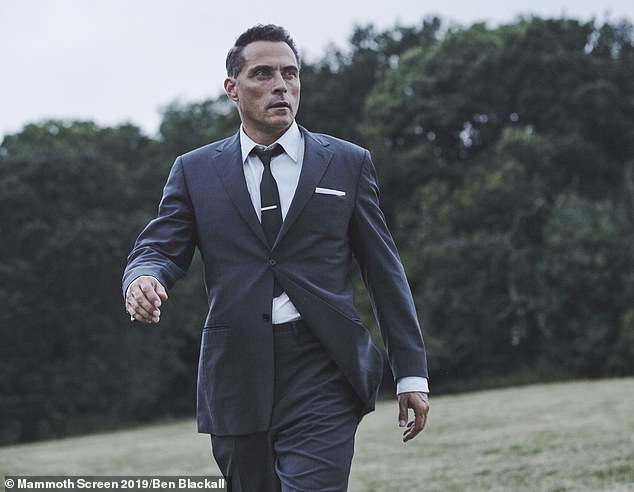 Why you can’t miss this: Dame Agatha never fails to thrill.

Incredibly, this book is credited with catching a serial killer: its description of poisoning by the metallic element thallium is so accurate that a doctor working with Scotland Yard on a string of murders recognised the symptoms, and the ‘Teacup Poisoner’, Graham Frederick Young, was caught.

Despite this, The Pale Horse is one of Christie’s least-known works, probably because it does not feature Miss Marple or Hercule Poirot: the hero is hunky Mark Easterbrook, who has the help of his sidekick, Ginger.

Rufus Sewell stars, alongside Bertie Carvel, Rita Tushingham, Sean Pertwee and Claire Skinner. The two-part adaptation is by Sarah Phelps, who wrote the screenplays for previous Christie TV shows including Ordeal By Innocence and The ABC Murders.

‘It’s about what we believe when all the lights go out and we’re alone in the dark,’ she says.

Why you can’t miss this: It’s all been building up to Diana!

Fans of Claire Foy and Matt Smith as the Queen and Prince Philip in the first two seasons of The Crown had a shock this year when Peter Morgan’s lavish drama returned: the portrayals by Olivia Colman and Tobias Menzies were far less sympathetic.

The show did not shy away from scandal either, as the marriage break-up of Princess Margaret (Helena Bonham Carter) and her affair with gardener Roddy Llewellyn were depicted in excruciating detail.

The royals must be dreading how the disastrous marriage of Prince Charles (Josh O’Connor) and Lady Diana Spencer (Emma Corrin) will be depicted in series four. The mercurial Gillian Anderson is Margaret Thatcher. 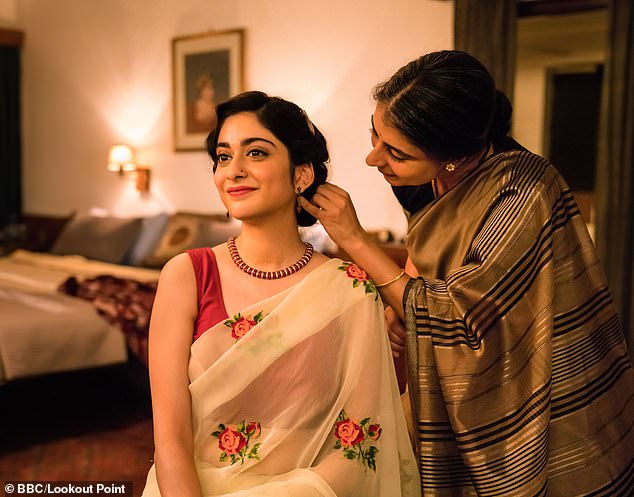 Adapted by Andrew Davies, this six-part series A Suitable Boy tells the story of four sprawling families in the wake of independence

Why you can’t miss this: IT’s simply too big to be ignored.

Vikram Seth’s blockbuster, set in the India of the Fifties, is one of the longest novels in English — a hefty 1,350 pages and almost 600,000 words.

Adapted by Andrew Davies, this six-part series tells the story of four sprawling families in the wake of independence . . . and the search for a ‘suitable boy’ for clever, unconventional student Lata (played by newcomer Tanya Maniktala) to marry. 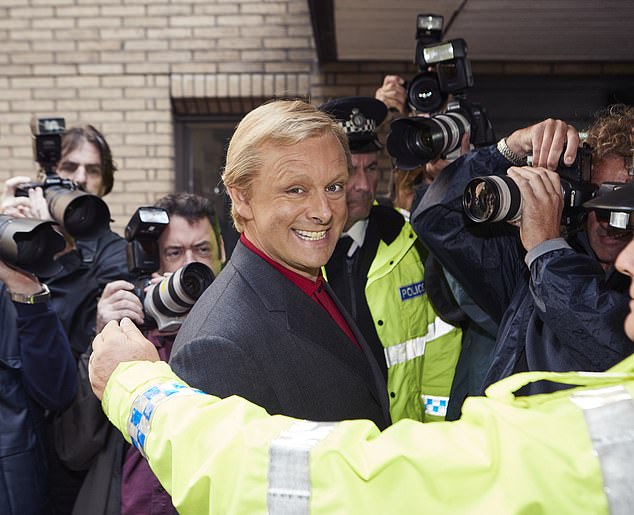 The scandal of the ‘coughing Major’, who almost escaped with a seven-figure fortune after playing Who Wants To Be A Millionaire? in 2001, has become part of television folklore

The scandal of the ‘coughing Major’, who almost escaped with a seven-figure fortune after playing Who Wants To Be A Millionaire? in 2001, has become part of television folklore.

As former British Army major Charles Ingram faced host Chris Tarrant’s questions, another man in the audience sent him the answers in code, by coughing.

Playwright James Graham turned the story into a hit West End production, which now comes to TV with Matthew Macfadyen as the Major and Michael Sheen as Tarrant. In the drama, the possibility is left open that Ingram was innocent. 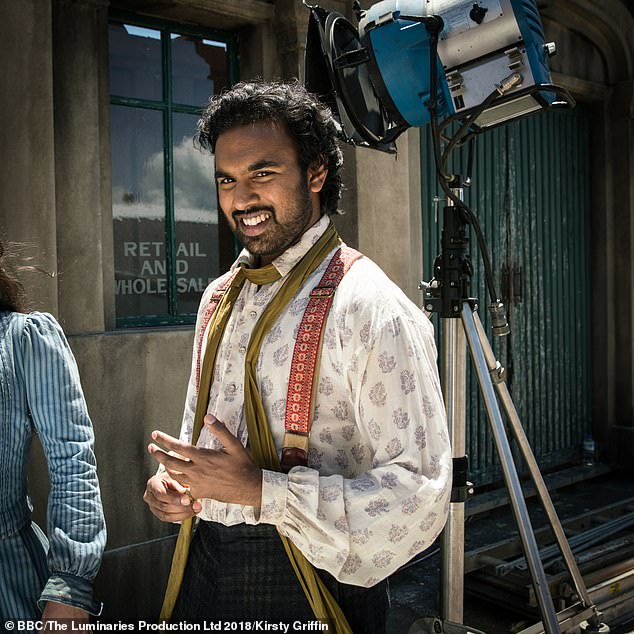 Why you can’t miss this: It’s written in the stars.

Casino Royale’s Eva Green stars in this rollicking adventure, based on the Booker Prize-winning novel by Eleanor Catton. It is set during the gold rush of the 1860s on New Zealand’s wild South Island.

Green plays the madam of a brothel and Eve Hewson is one of her ‘girls’, Anna. EastEnders actor Himesh Patel plays Anna’s lover, the charismatic Emery Staines.

The book explores themes of astrology and fate, but Catton has changed much of the story in this six-part adaptation.

‘It’s very different from the book, I can tell you that much,’ says Patel. 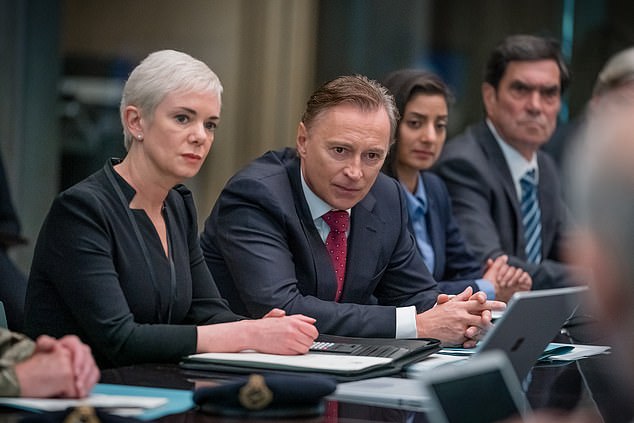 It feels too real to be fiction. Robert Carlyle, fresh from the destruction of civilisation in the BBC’s The War Of The Worlds, plays the Prime Minister during a national crisis

Why you can’t miss this: It feels too real to be fiction.

Robert Carlyle, fresh from the destruction of civilisation in the BBC’s The War Of The Worlds, plays the Prime Minister during a national crisis that sees troops on the streets and blackouts across the country.

Under siege, the PM calls a meeting of the Cobra committee, set up to counter terror attacks and national security threats. But not all of his colleagues can be trusted.

Victoria Hamilton plays his chief of staff and David Haig his duplicitous Home Secretary in this six-parter.

Why you can’t miss this: It’s the story behind the headlines.

Volatile and unpredictable, but breathtakingly talented, Sheridan Smith was at her best two years ago, when she starred in The Moorside as a campaigning woman who leads the search for a neighbour’s missing child.

In this three-part drama she is reunited with producer Jeff Pope and writer Neil McKay, telling the story of families fighting to discover the truth behind the murder of four young men — the victims of Stephen Port, ‘the Grindr killer’.

‘I love playing real-life characters,’ says Smith, ‘but with it comes responsibility.’ 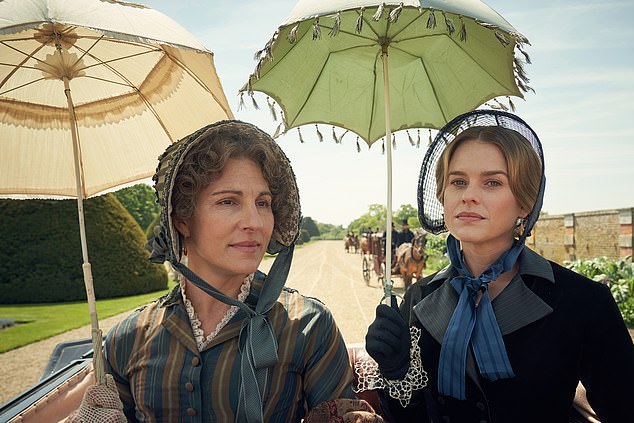 Set in London, the six-part series Belgravia opens with a ball thrown by the Duchess of Richmond on the eve of the battle of Waterloo

Why you can’t miss this: If you loved Downton, Belgravia will be a joy.

Writer Julian Fellowes does enjoy peeping at the aristocracy. His family saga about the lives and loves of the Crawleys of Downton Abbey was one of the most successful shows of the past decade, and now he aims to match it with an adaptation of his own novel, Belgravia.

Set in London, the six-part series opens with a ball thrown by the Duchess of Richmond on the eve of the battle of Waterloo, and spirals forward across two generations.

Why you can’t miss this: It’s noir crime drama at its chilly best.

The tagline is ominous: ‘Everyone has something to hide.’ David Tennant stars as a GP and family man, well-liked in his Scottish village.

But when his home is destroyed in a fire, and his wife and young daughters are found dead in the burned-out building, police suspect he might have killed them.

This four-part serial is written by Daisy Coulam, who brought Grantchester to TV.

Cush Jumbo plays Jess, the policeman’s wife determined to find out how the family really died.

Why you can’t miss this: Two stars in a fight to the death.

Colin Farrell plays a psychopathic harpooner on a whaling expedition to the Arctic in this four-part adventure set in the 1850s.

Jack O’Connell, who won a Bafta for his part in the film Unbroken, is the ship’s surgeon, hoping to leave behind a disgraceful secret.

This brutal historical drama is adapted from Ian McGuire’s Booker-nominated novel. As the ice closes in, the two men are locked in a struggle for survival. 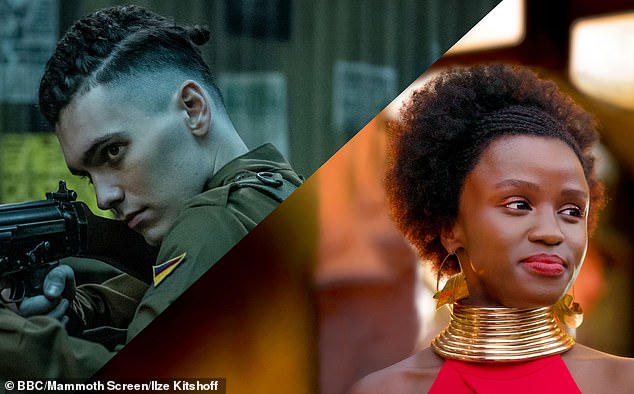 Racial divisions are the theme of Noughts And Crosses (BBC1), about a black ruling class controlling the white underclass in a dystopian Britain

BEST OF THE REST

The Vicar Of Dibley fans will be keen to see Dawn French playing malicious gossip Maggie in GLASS HOUSES (ITV), spreading rumours in her Cornish village. Mark Heap, Julie Hesmondhalgh, Vicki Pepperdine and Patrick Robinson are among her victims when she overshares in an interview.

Sci-fi and comedy are a strange mix, despite the success of Red Dwarf, so it will be fascinating to see if Hugh Laurie can keep control of Avenue 5 (Sky Atlantic) — an interstellar cruise ship. Makers HBO promise the greatest special effects ever seen in a sitcom.

Tom Hollander and Saskia Reeves co-star in Us (BBC1) as married couple Douglas and Connie.

They are set to embark on a grand family tour of Europe when she tells him she’s not sure she wants to be with him any more. Adapted by David Nicholls from his own novel, the story is poignant and funny.

Racial divisions are the theme of Noughts And Crosses (BBC1), about a black ruling class controlling the white underclass in a dystopian Britain. In this adaptation of Malorie Blackman’s novel, Jack Rowan and Masali Baduza are Romeo and Juliet couple Callum and Sephy. Stormzy stars as a newspaper editor.

Con-man, killer, thief and master of disguise, Charles Sobhraj was suspected of the murders of up to 20 young hippies who visited India, Thailand and Nepal in the mid-Seventies. Tahar Rahim plays the charismatic psychopath in The Serpent (BBC), with Jenna Coleman as his girlfriend and accomplice, Marie-Andree.

Another true crime is dramatised in Honour (ITV), with Keeley Hawes playing DCI Caroline Good, investigating the fate of 20-year-old Banaz Mahmod — killed by her family for loving the wrong man.

MAC MILLER'S MUSIC CAREER
Virginia lawmaker, whose bipolar son stabbed him in the face then killed himself, settles lawsuit
Victoria and David Beckham celebrate their 20th anniversary with a tour of the Palace Of Versailles
Gorgeous butterflies are captured landing on flowers across British countryside in stunning pictures
Lauren Sanchez's brother denies selling 'below the belt' photos of Jeff Bezos to National Enquirer
The team who sailed the Atlantic with teenage eco warrior Greta Thunberg
FBI hunt for missing Saudi serviceman after Pensacola Naval base shooting
Father, 52, murdered by screwdriver-wielding 17-year-old