An 83-year-old man says he is facing court after his car broke down at a private car park in Cardiff, causing him to exceed the free-stay period.

Bernard Rowlands from Penarth had visited the Capital Retail Park in Leckwith with his sister Elizabeth earlier this year and, after only an hour, the pair decided to leave.

However, upon discovering his Toyota Corolla wouldn’t start, Bernard called his breakdown service who arrived to fix the problem. 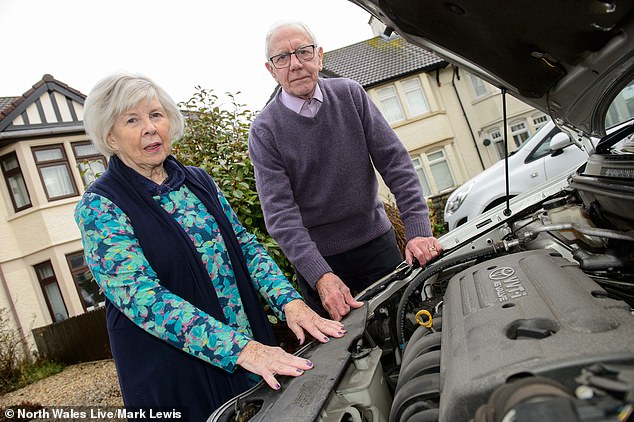 Bernard Rowlands and his wife, Beryl, are pictured with their car which broke down and landed them a fine which could land the pensioners in court

It meant that by the time the pensioner managed to drive away he’d exceeded the designated three-hour ‘no pay’ window by 35 minutes.

As a result, he was later issued with a £50 fine from the site’s operators which, despite appealing, has now risen to £145.

And if it’s not paid by the end of this month, it could result in him being taken to court. 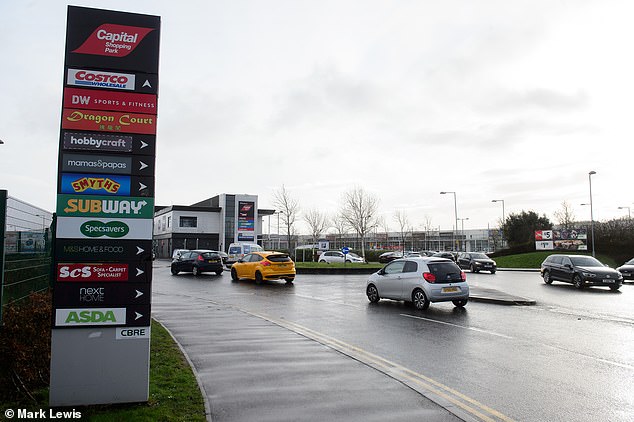 Pictured: Leckwith Retail Park in Cardiff where Bernard Rowlands was handed a parking ticket because his car broke down and he was unable to move it in time

‘Bernard’s been going to the Leckwith Retail Park with Elizabeth every Friday for years,’ says his wife Beryl, 79.

‘He parks up, she goes in and does her shopping, he waits for her in the car, they go home again – that’s it. But because the car wouldn’t start he had to get the RAC out and it took them several goes to get it working again.

What is Popla and how can you access it?

It is an independent appeals service paid for by the parking industry and was brought in under the Protection of Freedoms (POFA) Act 2012.

Just click the button that says ‘start a new appeal’, wait for your verification number and send the required documentation.

‘We didn’t think anything of it until we got a letter telling us he’d be fined for staying there too long.’

Told to pay up within 14 days, the couple contested it – via Popla, an independent appeals service for parking charge notices issued on private land. But they still face having to pay or incur legal proceedings.

‘We’ve showed them all the RAC paperwork as proof we weren’t lying, but it doesn’t seem to have made any difference,’ adds Beryl.

The same car park was in the news earlier his month when a number of people were incorrectly issued with fines after the free period was halved due to a football match taking pace at the nearby Cardiff City Stadium.

Shoppers successfully appealed against the charge, claiming there were no signs warning the match was being played.

Premier Park, which manages more than 850 car parks across the UK, including the Leckwith site, has been contacted for comment.

NASA reveals new images of its InSight lander preparing for work
Clothes that can colour your mood: Your wardrobe choices really can change the way you feel
Incredible photos show climbers lining up to reach Snowdon's peak
Calls for a radical overhaul of laws surrounding revenge porn
Jeff Bezos covers Lauren Sanchez in kisses during a PDA-packed trip to Wimbledon after divorce
Key workers list revealed as government announces whose children can stay in school
CHRISTOPHER STEVENS: Puffed-up baker Paul doesn't do wry... unless it's in a loaf of bread
British teenagers are among the worst in Europe for sleep problems, new report suggests